Bedbugs, Stinkbugs and Ants, Oh My! 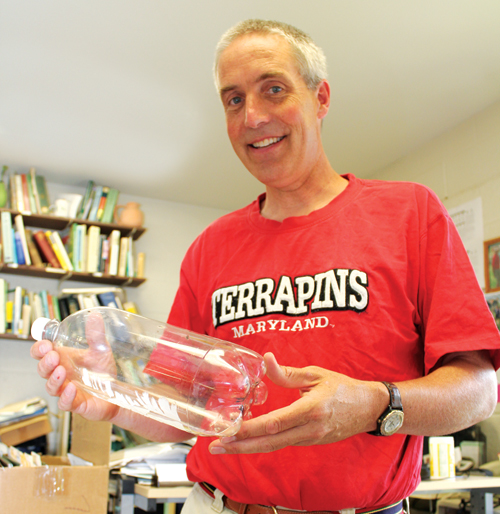 University of Maryland extension educator Steve Allgeier is often asked to identify bugs that people drop off at his Carroll County office.

As summer wanes and nature signals the approaching autumn, a menagerie of fall pests emerge to target Carroll County and its outlying areas.

These relentless creatures have proven themselves annoying, invasive, and in some cases, downright destructive. And as many Carroll Countians have already discovered, they are not going to crawl, fly, or run away on their own.

Are we never going to rid ourselves of these creatures? Well, never say never. Following is a rogue’s gallery of pests that readers will find in Carroll County this August and September, as well as tips on how to keep them away from hearth and home.

With nearby Baltimore ranked the number 10 city on Orkin’s 2010 bedbug list, it looks as if Carroll Countians will have their hands full this year with these irritating invaders.

According to Steve Allgeier – the Extension Educator, Home Horticulture Specialist, and Master Gardener Coordinator for the University of Maryland Extension, Carroll County – “bedbugs are nondenominational . . . they’ll hit rich, poor, whatever.” The best strategies with bedbugs, he explained, are vigilance, awareness, and the practice of exclusion, so they don’t set up shop in the first place.

“Bedbugs are probably the hardest pest to get rid of once they’re in your home,” said Allgeier. “You can superheat your rooms to kill off bedbugs. It’s not 100 percent, but it has worked well. And if you come back from a trip, put your clothes in the dryer on a real hot temperature. That kills the adults and the eggs. Cold temperatures don’t do it, the bedbugs only go into a kind of suspended animation, whereas the heat will kill them.”

Allgeier also suggested hiring a professional who has a proven history of getting rid of bedbugs. “You can give anyone the right chemical,” he said, “but you need someone who understands the bedbug’s biology and lifecycle to do the job right.”

Centipedes are viewed as beneficial bugs in other countries, and according to Allgeier, they should be in Carroll County as well.

“People don’t like centipedes because they come inside, but they’re voracious eaters of spiders and other pests,” said Allgeier. “A friend of mine stationed in Taiwan went to a local market, and came across caged centipedes: Fast-moving, extremely poisonous centipedes that people would buy and let loose in their house. And even though the centipedes could bite, their owners knew that they hunted down spiders, so it was the lesser of two evils.”

Millipedes, on the other hand, come in the house and end up dying. They don’t eat household goods (they prefer decaying organic matter), but they’re ugly and a nuisance and tend to come inside at the end of the year.

“They’re going to die anyway, so why bother spraying,” Allgeier said. “Finding centipedes and millipedes inside the home is a good indicator that you got a door sweep or a window that’s not fitting tightly. Your best course of action is to tighten up, which is going to save you money in the long run, because there’s probably leaky spots where cold air comes in or heat goes out.

“It’s a simple recommendation to give, but it’s very un-American. Americans love to see that bottle of chemicals. People would bring in a bug, open up whatever it was in, and ask, ÔHow can I kill it? What can I spray?’ And IÔd tell them that they don’t have to kill it, that it’s a beneficial bug that’s doing them some good. Millipedes help gardeners because they break down decaying organic matter into material that plants can use. Centipedes, which frequent bathrooms and moist places, hunt down insects that get inside the home.”

The best way to keep cockroaches out of your home is to watch what you’re bringing inside. Say you have roaches at your workplace, and one of them falls into a purse or a jacket. Unbeknownst to you, a roach could ride along home and set up shop. The best strategy is to use gel baits, which have a lure that attracts roaches and a poison that kills them off. If the roaches get bad, call a professional. It will cost you, but the exterminators know their stuff and use better quality gel baits.

If you live in a multi-unit apartment building, be aware that you may always have a roach problem. A neighbor may be bringing them in unawares, or may not even care about the roach population.

“Deer, oh dear,” said Allgeier. “We have taken a native species [Whitetail Deer] and effectively turned it into an invasive species. We have removed its predators, offered it plenty of food, and now it’s a real nuisance.”

Deer are public enemy number one with most gardeners, farmers, and even foresters. From crops to tree saplings, this pest’s appetite can know no bounds. To control it, owners who have big properties located in areas where controlled hunts are legal (unlike Westminster) can take that route. Allgeier also suggested exclusion, meaning building a big fence to keep deer off the property. There are also deer sprays and products available, and you can always use dogs to scare them off.

“Ants and termites like wet weather,” said Allgeier “and we really gave it to them this spring.”

Ant baits have been successful in controlling ant populations, but unfortunately, there’s not one universal bait that will work all the time.

“You have to experiment with the bait and see if they show up,” said Allgeier. “If they do show up, that means you hit a home run because they’ll take the bait’s poison back to the nest. That’s the key, because we know ants share their food, groom each other, and have a society.”

“Don’t use sprays with your ant baits,” said Allgeier. “You want the ants to be happy when they enter the bait, and healthy when they leave it to go back to the nest and take it to the reproductives. You can stand outside of an ant hill and step on every ant you see coming out, but they’ll keep replacing them unless you stop the reproductives. And the best way to get the poison to them is to get the ants to do it for you. If the baits don’t work, though, you may want to call in a professional.”

According to orkin.com, boric acid also arms the homeowner with another effective way to control ants, including elusive carpenter ants. However, the exterminator warns that “boric acid solutions must be carefully formulated, and there is no guarantee that over-the-counter solutions will kill a colony.”

Termites are tougher because they are hidden. You can go to a hardware store and buy outdoor treatments, but research shows that homeowner systems are not very effective compared to commercial products. There are, however, termite baits that work in the same way as ant baits; on the principle that the termites take the poison back to the nest.

If you are worried about termites, put wooden stakes in the ground every 10 to 12 feet, about a foot or two from your house. Then, during the warm season, pull the stakes up, knock the dirt into a plastic tub, and see if you find termites feeding on the stakes. That will tell you if termites are near your house. Then, you can start look at your walls (usually in the basement) to see if there are any mud tubes going up the walls, because termites are subterranean and have to build mud conduits.

Allgeier recommended that your best bet with termites is to consult a professional. For most people, do-it-yourself type products don’t make the grade.

The long and short of it is Carroll County probably has not seen stinkbugs at their worst.

“When people first started gnashing their teeth and pulling their hair out last fall,” said Allgeier, “only certain portions of the county noticed high stinkbug populations: Mostly southern Carroll County, bits of New Windsor, and parts of Taneytown. People in Westminster complained, but they’re going to see a lot more this year.”

Allgeier explained that we are not close to finding a good control strategy on stinkbugs. There are the old-fashioned “shotgun” pesticides that will kill them, but they’re currently in the process of being taken off the market.

There are lots of remedies being offered on the Internet by what Allgeier called “snake oil salesmen;” people who give bogus advice like taking a pack of cigarettes and soaking it in water to extract the nicotine.

Then, there are things like the two-liter soda bottle trap. The idea is that you cut off the top of the soda bottle and flip it over to create a funnel, then put a light in the bottom to attract the stinkbugs. Stinkbugs respond to light, but the entomologists who have tried the trap say that the results are pretty poor.

The best strategy for the homeowner is exclusion. Carl Larkin, an NFI Master Hearth Professional at Fireworks Inc. in Westminster, says that stinkbugs love chimneys, and has suggested that homeowners purchase glass fireplace doors to keep the pests from crawling out of the hearth into the home.

“The stinkbug” said Allgeier, “is a pest that will probably be with us forever. Like the Japanese Beetle or the Gypsy Moth. We’ll eventually come up with control strategies, and that will probably involve predatory insects to feed on them, tighter houses, and better chemicals. At this point, there’s no pie-in-the-sky strategy that’s going to get rid of them.”