To Bring History Back to Life 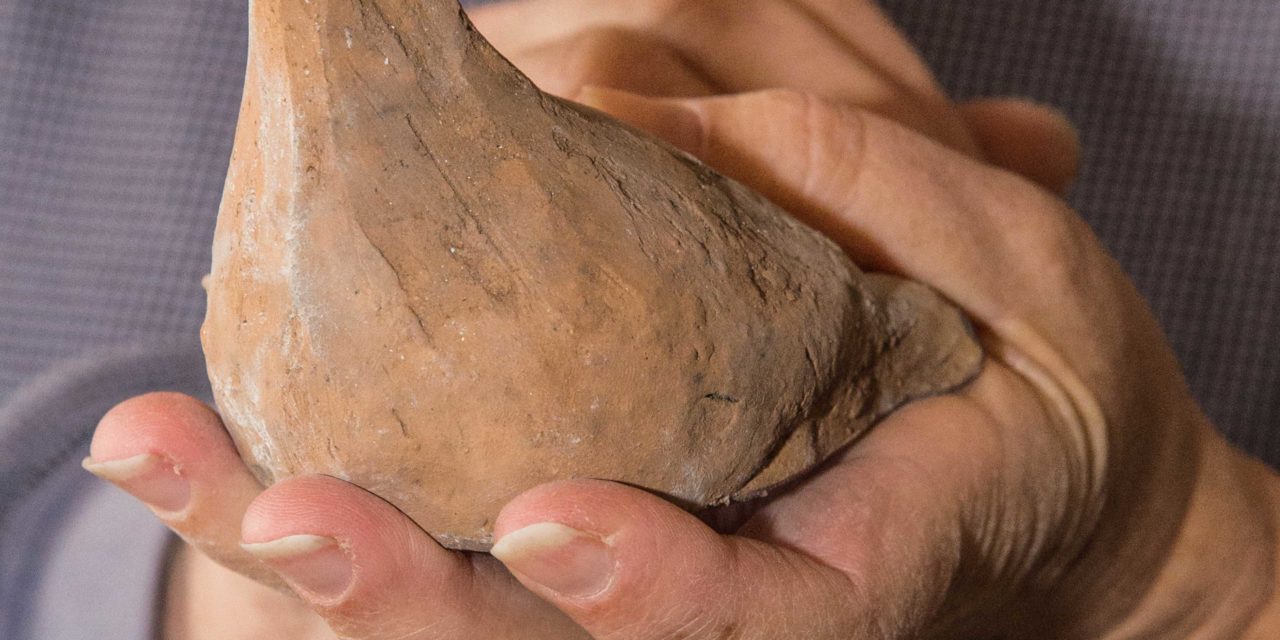 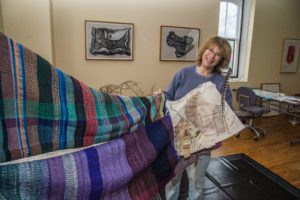 Union Bridge artist Jo Israelson displays some of the weavings to make a symbolic tent for her recent exhibit, “Welcoming the Stranger”, in the JewishMuseum of Maine.

For Jo Israelson, a Union Bridge resident, it is never too late to save an island in Maine with historical significance, connect with your roots, and use all the information you gleaned to create a community art project and art exhibit.

WHO: It has been over 40 years since Jo Israelson grew up in a Jewish family in Portland, Maine. In the ensuing years, she has had four careers – as a university teacher, government worker, sculptor and film maker – and numerous paying jobs to support her artistic passions. To pursue her dream of being an artist, Israelson came to Carroll County in 1994, where she is well known for renovating an abandoned Union Bridge fire house to serve as her current home and art studio. Perhaps her most recognizable local work is her limestone sculpture, “Liber,” of a comfortable chair in the Mary Lou Dewey Sculpture Park of the Public Library in Westminster .

WHAT: As an artist and freelancer, Israelson had the freedom to return to her childhood home in Maine where she spent the last several summers caring for her aging mother. On a visit to the Jewish Museum of Maine, built around the historic Etz Chaim Synagogue, Israelson’s mother mentioned that Jo’s grandfather had been instrumental in founding the synagogue in the 1920s – a new and surprising piece of family history to Jo. During that visit, Israelson met the curator and they agreed that the museum would host an exhibit of Israelson’s art there in two years. What exactly her exhibit would entail, Israelson did not know at the time.

Over the same summer, to relieve the stress of caregiving, Israelson relaxed by kayaking near her mother’s home. One day she noticed large earth moving equipment on nearby House Island. Israelson didn’t know much about House Island, but thought there were some old buildings there. So, she called City Hall and asked about permitting for the upcoming work. Apparently, no permits had been issued. Disturbed by the possibility of history being lost to yet another McMansion, Israelson spent the next six months helping to research the history of the island, bring awareness to its historical significance, and enlist others to help save the island from development.

“Everyone just assumed House Island was protected,” said Israelson. “But it wasn’t.”

Through her research, Israelson discovered that part of House Island was considered the “Ellis Island of the North,” as Portland’s Inspection and Quarantine Station, an immigrant way station which took overflow from New York and Boston in the late 19th and early 20th centuries, including many Jewish immigrants escaping the pogroms sweeping eastern Europe.

The process took six months, but armed with Israelson’s research from the Maine and National Archives and with the support of other local historical societies, the mayor and city council formally voted to include House Island as a Historic District in Portland, a designation that requires any development to be managed in a way that retains the original history of the site.

“Wow, I helped save an island!” exclaimed Israelson. “Now that was a new adventure.” 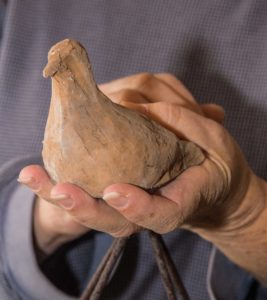 Israelson holds one of 365 clay doves, part of a current installation at The Artist Gallery in Frederick, entitled “Dove Cote: 365 Prayers for Peace”.

WOW: Saving the history of House Island proved to be only the first part of the adventure. Israelson happened to converse with a taxi driver who was a new immigrant to Portland, a city that continues to welcome immigrants from all over the world.

A self-described Jewish Quaker, Israelson began to think about the stories of the Jewish immigrants who came through House Island almost 100 years ago and the stories of modern day immigrants still coming to Portland.

“The stories of all of these immigrants are the same,” explained Israelson. “It is the story of people who seek asylum and the chance to make a better life.”

All of these disparate pieces of family history, Portland’s immigrant history and its current immigrants led Israelson to a plan for her exhibit at the Jewish Museum.

“I thought about the story of Abraham; we all descend from Abraham,” explained Israelson. “His story can be found in the Bible, the Torah, and the Koran. Everyone was welcome to enter Abraham’s tent. Strangers knew they would receive care and be treated with respect.”

Though she had never been a fabric artist, and Israelson decided to weave Abraham’s tent.

“I am a stone carver, and stone carvers do not weave!” explained Israelson. “But I had this notion of a city-wide community project of weaving a giant Abraham’s tent and incorporating discussions of immigrants and how to welcome a stranger.”

Over the next year, Israelson built giant looms and set up them up in various places around the city of Portland including libraries, parks, and schools. Individuals, families, religious and community groups, and groups of artists all contributed to the weaving and ensuing discussions concerning immigrant issues in their city.

For the exhibit at the museum, the community weavings hung from the ceiling, a symbolic “Abraham’s tent.” To connect the tent with the immigrants who came through Portland’s Inspection and Quarantine station, Israelson created a floorcloth that was stenciled with seaweed from House Island.

In addition to the tent weavings and floorcloth, Israelson created an audio version of the well-documented experience of a particular Jewish immigrant who came through House Island in the 1920’s. She combined this with audio stories from city cab drivers who are current immigrants to Portland. She even managed to put an actual taxi cab in her exhibit to house these stories.

The final piece of the exhibit fell into place when Israelson decided to pursue another piece of information she found in an obscure paragraph during her historical research.

Through painstaking research, she learned the stories of six women who founded the Maine chapter of the National Council of Jewish Women in 1920, and took it upon themselves to set up a kosher kitchen on House Island for the benefit of all the Jewish immigrants. Israelson honored these women by creating an apron representing each one.

Israelson’s exhibit “Welcoming the Stranger: Building Understanding through Community Based Art” was on display for eight weeks at the Jewish Museum of Maine in the Fall of 2015.

“Because I went back to my home town, I learned about its Jewish history, which is my family history.” said Israelson. “Because I helped to save House Island, all of my historical research, current and past immigrant history, is now archived and well documented – the apron women and others are part of the history books.”

“I can only use the Yiddish word, bashert – it was all meant to be.”