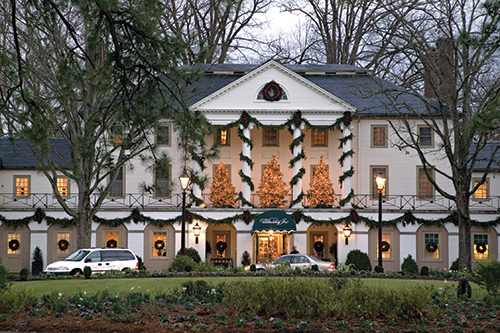 If you are frazzled and need some time away at this season, here are a few suggestions:

Winter Glitz
The Gaylord Resort on the Potomac at National Harbor has not been around very long; only open since 2008. But it has quickly become a popular regional holiday destination. And it’s easy to see why: More than two million twinkling lights and more than two million pounds of ice go into the creation of ICE!, a walk-through wonderland of sculptures, a two-story slide, and a re-created Big Apple, featuring the sights and sounds of a Manhattan Christmas. There’s even a nightly snowfall. This year’s ICE! theme is “’Twas the Night Before Christmas.” Bring your jackets; all that ice must be kept cold.
Holiday packages range from $269 (2 people) to $309 (4 people) and include one night at the Gaylord Hotel, a $100 resort credit (toward souvenirs, spa, dining, etc.), tickets to ICE!, and a souvenir family photo.
¥ 301-965-4000, www.marriott.com
¥ 1 hour, 20 minutes from Westminster.

Victorian Winterfest
If you want closer, smaller, and a less expensive, Chesapeake City is a lovely Victorian village usually bypassed by anxious folks speeding toward the Atlantic beaches.
In its original incarnation, it was known as Bohemia, but construction of the Chesapeake and Delaware Canal in 1839 gave the town its current name (today, there’s a nice little C&D Historical Museum). It’s a diminutive place south of the more well-known Elkton, but Chesapeake City does its best to lure visitors during the holiday season. And it does a fine job of it.
Beginning with a public tree lighting on December 1, the rest of December sees special activities including bands, carolers, visits from the Clauses, a historic home tour, and more.
This is the year to visit, as Chesapeake City is inaugurating its First Annual Winterfest. For the entire month, both sides of the canal will be awash in holiday lights with enormous and inventive lighted displays along the harbor and throughout town. Free shuttles are available to take visitors to both sides of the canal for views of all the lights.
Every Saturday during Winterfest from 11-5, Santa will enchant visitors in the central Pell Gardens, followed by free holiday concerts by area school bands.
Don’t miss the town’s Candlelight Tour on Dec. 14, starting at 6 p.m. from Town Hall. The tour takes in private homes and historic lodging houses, all of them open to the public during the tour.
Several restaurants in town offer special Winterfest deals. And there is no dearth of lodging options, as Chesapeake City has many quaint B&Bs.
¥ 410-885-5298; www.chesapeakecity.com
¥ Just under two hours from Westminster.

The Zoo in Winter
One of the wonderful attractions about the National Zoo in Washington, D.C.’s Woodley Park neighborhood is that as part of the Smithsonian Institution, it’s free (assuming no government shutdown has shuttered it). The same holds true even during special holiday events. In short, this means ZooLights.
More than half a million lights are employed to create glowing, twinkling silhouettes of some of the zoo’s most popular animals: elephants, pandas, chimpanzees, even a komodo dragon. The lights are cool enough, but just strolling around the zoo at night is an attraction by itself. The darkness provides a perspective one usually doesn’t get visiting a zoo. But there are also crafts, ice sculpture demonstrations, and storytellers. If you get cold, you can head into the enclosed structures, such as the great ape house, to warm up.
¥ ZooLights is open 5-9 p.m., Nov. 23-25 and 30; Dec. 1-2, 7-9, 14-23, 26-30, and Jan. 1.
¥ Admission to the zoo is free (though parking is $9-$16).
¥ 202-633-4888, nationalzoo.si.edu
¥ 1 hour, 20 minutes from Westminster.

The Cozy Cabins of Western Maryland
Let’s face it. The holidays can sometimes be pretty stressful. For many, the perfect holiday season is one in which you get away from it all. Full service cabins in Western Maryland provide a perfect getaway. Both Herrington Manor State Park and New Germany State Park in Garrett County offer fully furnished cabins with electricity, fireplaces, and kitchens; in short, enough to make you comfortable but with the requisite rusticity to feel as if you’ve made an escape. Many of the cabins in both parks have undergone renovations this fall.
If you get antsy, cross-country skiing is on tap: ten miles of trail at both New Germany and Herrington Manor and another five miles connecting Herrington Manor to Swallow Falls State Park, which features Maryland’s largest free-falling waterfall. Seeing it in winter, when sections of the falls have been frozen into ice, is a special experience. Designated sledding areas in the park attract snowboarders as well as sledders.
At New Germany, the lake house “warming hut” is a great place to, well, you know. Hot drinks and food are on sale and skis and snowboards can be rented there as well.
A two-night minimum stay is required on non-holiday weekends and a three-day minimum on holiday weekends. Pets are not permitted in the cabins at Herrington Manor, but pet cabins can be rented at New Germany.
¥ Herrington Manor 301-334-9180, dnr.state.md.us/publiclands/western/herrington.asp; New Germany, 301-895-5453. dnr.state.md.us/publiclands/western/newgermany.asp.
¥ Cabin reservations made by calling 1-888-432-2267. Cabins range from $77 (2-person) to $177 (8-person) per night.
¥ New Germany State Park is in Grantsville (2 ? hours from Westminster) and Herrington Manor is in Oakland (3 hours).

Colonial Delights
From the new to the old: Colonial Williamsburg still charms after all these years.
A contrast to the glitz and splendor of the Gaylord, Colonial Williamsburg offers an old-fashioned Christmas season that continues to delight.
Musical performances, illuminations, plays, a home tour: all set against the perfectly preserved backdrop of Colonial America. You’ll be forgiven for thinking you landed in the 18th century.
Holiday times at Williamsburg are very popular, but the attraction is large enough to rarely feel too crowded, and special holiday packages are available.
¥ (888) 965-7254
¥ www.colonialwilliamsburg.com/holidays/
¥ 3 ? hours from Westminster.