Exercising Out of the (Gym) Box 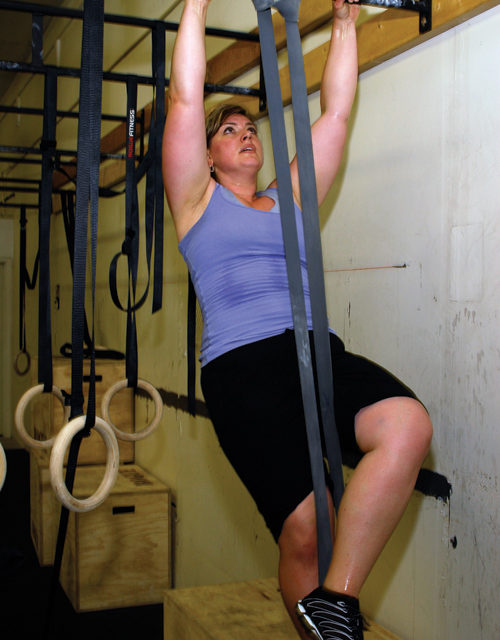 Tiffany Vickery does pull-ups as part of the CrossFit exercise regime.

If pumping iron, jumping rope, trudging up the Stairmaster or on the belt of a treadmill at the gym have lost their appeal, fear not. There are non-traditional, calorie burning work-outs that not only promote fitness, but social interaction as well.

It is less expensive, more informal, requires no long-term commitments, and is tailored to the requirements of fitness enthusiasts seeking schedule flexibility and a support system.

Unlike gyms, fitness centers or health clubs, these nontraditional workout groups are often housed in creative spaces rented in obscure places. In many instances, they lack the amenities, such as showers, saunas and locker rooms, common to traditional gyms. Nevertheless, fitness enthusiasts are flocking to them in droves.

Two programs in Westminster offer the alternative forms of fitness that are attracting people of all ages looking for a unique exercise experience.

At CrossFitRetribution in Westminster, located in a converted auto body shop behind 71 John Street, owner and coach Beau Bryant works with some 50 enthusiasts weekly.

Bryant’s defiant “retribution” trademark implies the “no pain, no gain” philosophy of the committed athlete.

“The name,” he said, “comes from the definition, Ôthe giving or receiving of reward or punishment.’ Sometimes reward can feel like punishment at first…What we do is not easy, but nothing worth anything is attained easily.”

Looking for a new way to feel the burn, his clients have “crossed over” to a form of exercise that includes the use of bars, rings, ropes and other objects. Crossfitting combines that with rowing machines, weightlifting and sprinting.

“This is really different for people, but they like it,” said Bryant, who is a mixed martial arts specialist working as a certified strength coach under contract with the U. S. military.

“People come here and we scale their workouts to their ability,” said Bryant. “It’s performance-oriented, not a competition. We look to maximize work through wide range of motion. It’s a series of dynamic movements. We identify areas of issue for each individual and we get results.”

Bryant started CrossFitRetribution last July in an effort to offer personalized fitness training challenges catered to each individuals’ abilities and goals. Bryant’s group is one of nearly 2,500 affiliates nationwide that have adapted their fitness instruction from the CrossFit concept.

The work-outs offer participants a whole new exercise dimension and are becoming increasingly popular for people who share an interest in fitness and socialization.

“I have people that are here four times a week,” said Bryant. “And when someone doesn’t show, there’s a phone call asking, ÔWhere are you?’ There’s a real community aspect here. Everyone who comes here is friends. We go to dinner, to kids’ birthday parties – it’s a real community.”

Phyllis McCrobie has been actively involved with CrossFitRetribution for almost a year. Her involvement has been life changing. “I was in a rut and needed to do something about it,” said the 32 year-old Taneytown resident. “My husband I were feeling unmotivated, we wanted to get healthy for our five year-old son. We heard from other people what a difference [CrossFit] made so we got involved.”

McCrobie, a special agent with the Department of Defense, has shed 100 pounds in less than a year and attributes her success to group support as well as the unique work-outs.

“This would not have been possible without the support of the others here,” she said. “It is truly a team effort. We encourage and support each other. Everyone’s very much in tune with one another.”

Bryant, who does not advertise, said “word of mouth” keeps people coming to check out CrossFitRetribution.

“We use no traditional marketing,” he said. “Our biggest compliment is people telling people,” Bryant said. “It’s all ages – high school athletes, kids home from college and those looking to get fit.”

Bryant’s CrossFitRetribution requires no contract. He offers a monthly fee structure of $125 for an individual and $165 for a couple.

“I really encourage people to come out and see what we do,” he said. “It’s good to try a couple of workouts and see if it’s a fit before you make the commitment.”

Just a few miles away, in the Westminster Gateway Plaza off Rt. 140, is Thrive!!, which is not affiliated with the Crossfit brand.

Lynette Stupi, owner and operator, opened Thrive’s doors in late May to offer an alternative to the “big box” gym. Stupi, who has been in the fitness industry for 30 years, said, “Fitness and people are a passion of mine. Opening Thrive was a leap of faith.”

In her 40 by 30 foot studio, beneath tangerine-colored walls (one covered with mirrors) is a specially designed floor layered with cork, gel and bamboo that supports a variety of functional fitness activities such as Zumba, yoga, kickboxing, body pump, drums alive and suspension training.

In an adjacent room, Thrive offers spinning for the cycling enthusiast.

Most group classes are accompanied by a pulsating, rhythmic music that underscores Stupi’s trademark energized direction and encouragement.

“The gym environment didn’t work for me,” said Rebecca Rucker, 38, of Westminster. “I was tired of it; too boring. And there’s only so much you can do in a gym. Having someone leading keeps you engaged and encouraged. My mom and daughter come with me sometimes. I like that you can do this with your family and friends. I love it!”

Thrive is not membership or contract-oriented. Packages of 20, 10 and six classes are offered. A 20- class package is $140; ten classes, $75 and six classes, $48. Drop-in price is $12 per class. People have three months to use the package they have purchased.

“There’s a population of people who do not want to be in a gym,” said Stupi. “There’s another aspect to wellness: a sense of community, a sense of belonging. Thrive offers that and that’s what keeps people coming back.”