Give But What If It’s Poorly Received? 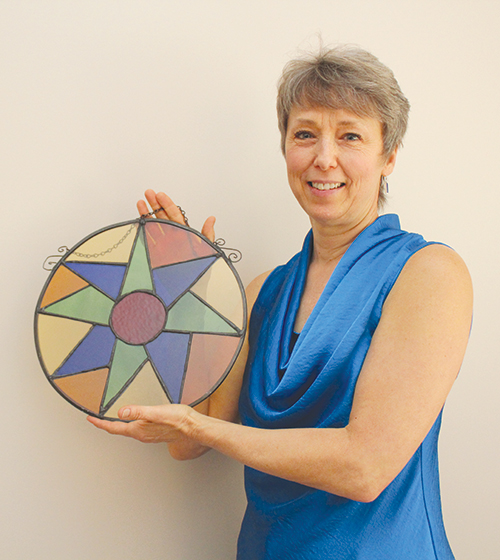 While the stained glass piece was beautiful, it didn’t fit into Vickii Engel Thomas’s home decor. She ended up putting the piece in a spare bedroom. Photo by Amy McIntyre Devilbiss
Every year at Christmas, Marilyn sent her sister-in-law a lovely gift. She went to a fancy boutique where she spent more time than she should have picking out the gift — usually a scarf in the jewel-tone colors Marilyn herself liked.

But every year at Christmas, Marilyn missed the joy she thought the gift would bring. She got a thank-you note, but she never saw the scarf being worn. Marilyn suspected the gift was being regifted.

The next year, as Marilyn wrapped and her husband heard her muttering angrily to herself, he said seven fateful words: “You don’t have to send a gift.”

A lightbulb went on; Marilyn had an epiphany. She took the beautiful jewel-tone colored scarf out of the box and put it around her neck. To this day, she enjoys wearing the best holiday gift to her sister-in-law that never got sent.

Holiday gift-giving is a minefield.

Hurt feelings lurk around every corner, resentment in every nook and cranny. Family feuds have started over less. The season is filled with tales of gift givers whose gift was not appreciated and of gift recipients who didn’t like or want what they got.

When Westminster resident Vickii Engel Thomas received a gift of stained-glass art she felt didn’t fit into her home decor, she didn’t feel obligated to hang it — until the giver, a person close to her, noticed.

“He asked about it,” says Thomas. “We found a compromise. I put it in a place not seen frequently.”

Thomas, owner of the Center for Healing Arts, where she is also a counselor, notes that gift-giving might be more about personal and family relations than about the gift itself.

“It gets into emotions, to feelings about the other person and how they feel about you. That’s where it gets sticky.”

One of Thomas’ clients gave her adult daughter cash to buy a specified item. The daughter took the money but replied that she’d spend it on whatever she wanted.

“You have to ask yourself, ‘Why am I giving this gift? Is it an obligation or free choice?’ Sometimes people give gifts for control. Sometimes they are expecting a response like ‘You are loved, you are appreciated,’” says Thomas.

That was certainly the case with another client whose gift to a family member was met with a nasty put-down. “The relative opened the gift and made a negative comment, to the effect ‘You must not have paid full price for this,’” says Thomas.

It’s hard not to feel hurt. But Thomas advised her client to take another view. “I told her, ‘That’s the recipient’s issue. You gave a gift from your heart, but don’t engage in a battle over it. Take a deep breath and let it go.’”

Clinical psychologist Dr. David Raznick agrees. The holidays are supposed to be a joyous season, but for some it’s an annual reminder of family members who don’t get along and of issues left unsettled.

“It can resurrect unpleasant family dynamics from the past,” says Raznick, the founder and clinical director of Carroll Counseling Centers in Eldersburg and Mount Airy.

“If my grandmother gave me a sweater she knitted, I’d wear it — when she visited,” says Raznick, who has other suggestions for navigating the perils of gift-giving and gift-receiving.

A family member who has done well financially gives very expensive gifts, sometimes to the embarrassment of relatives who cannot reciprocate in kind. In another family, one member has taken to sending relatives a list of acceptable gifts. In a third family, the children get gifts but the adults get a donation to a charity in their name.

“Be gracious,” is Raznick’s advice in all such situations. “Remember, it’s not about the gift itself, it’s the intent. Someone has taken the time to think of you.”

Even gifts of the “what were they thinking?” variety deserve diplomacy. For instance, one woman, whose tastes run to hand-crafted pottery and plain wooden furniture, received an ornate faux jewel-encrusted picture frame from her husband’s adult children.

“It was so not me,” says the woman, who thanked the givers and then put the frame in a drawer. “I pull it out when they visit.”

Sometimes, though, being gracious is easier said than done. That may signal a time, says Thomas, “to rethink a gift-giving tradition.”

Her family was on a strict budget, but the woman felt obligated to send her husband’s four nieces and nephews gifts every Christmas. That ended when, on a visit one summer, she saw her holiday gifts unopened and stacked in the basement. She sent holiday cards after that.

Says Thomas, “There is an expectation that a gift will be used, and you’re disappointed when it’s not. You could have a conversation about it, but it takes courage to have that conversation.”

Hanson’s advice: Give the mother-in-law the benefit of a doubt. “Maybe she forgot,” Hanson says. “In public, thank her, and then you might want to say something privately.”

Each family and circle of friends establishes its own rules for holiday gift-giving. They might include setting a maximum dollar amount or avoiding anything too personal. The rules could be no Christmas sweaters with grazing reindeers or ties with dancing Santas.

Whatever the rules are, says Hanson, it’s important to honor them.

“If the maximum is $10 a gift and you go over that amount, give the gift privately and not for the holiday,” she advises. “If the gift is going to make someone uncomfortable, don’t give it.”

But Hanson doesn’t consider it impolite to follow up on a gift. One of the most common etiquette questions she gets is about gifts that are sent but not acknowledged, the giver left to wonder if the gift arrived.

Wait a few months, then contact the person and ask.

“And remember,” she says, “you are not required to give a gift. If you don’t get a thank you, you don’t have to send more.”

On the other side, Thomas has advice for the recipient: Be gracious, acknowledge the intent, then decide what you want to do.

“Yard sales, resale shops and Goodwill are full of items people didn’t want,” she says. “And we’re all familiar with the term ‘regifting.’”