Art Riley: Impacting Kids Locally and Around the World 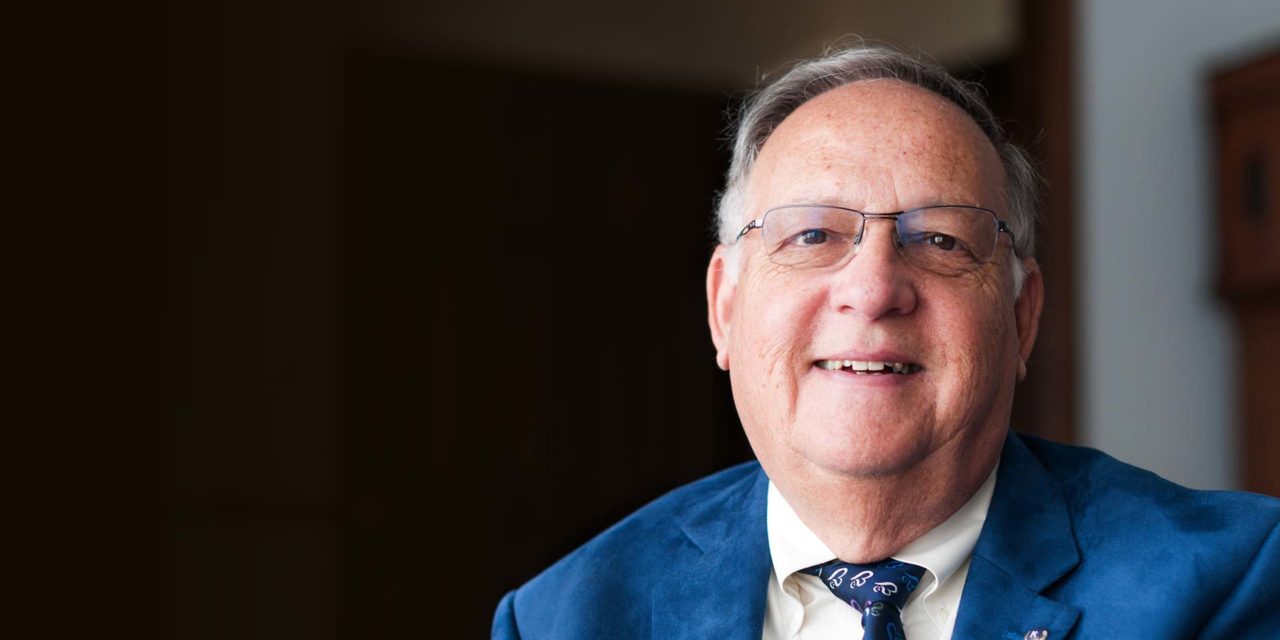 Arthur “Art” Riley grew up in Westminster, had a successful pharmacy business here and raised three children with his wife of 46 years, Vickie. A common thread woven through his life since childhood has been his commitment to serving kids through his work with the Kiwanis Club. He was first exposed to the club in 1956 when traveling with his father to a Kiwanis International convention in San Francisco.

Kiwanis is an international service organization focused on helping kids, with close to 600,000 global members and more than 5,000 clubs in the U.S. Local clubs aim to serve community needs and the international organization takes on large-scale challenges such as fighting disease and poverty.

Kiwanis International was founded in 1915 by a group of businessmen in Detroit and Michigan. The name comes from an American Indian expression, Nunc Kee-wanis, which means “We trade.” In the early years, members focused on business networking, but in 1919 the organization changed its focus to service, specifically to children, according to Kiwanis.org. In 1920 the motto of Kiwanis became “We Build”; that remained until 2005, when members voted to change the motto to “Serving the children of the world.”

Kiwanis offers service opportunities to every member of the community — including youths. In addition to Kiwanis for adult members, the organization also supports K-Kids for elementary students, Builders Club for junior high students, Key Club for high school students and Circle K International for college students. They also have Aktion Club for adults with disabilities.

Kiwanis Westminster focuses on encouraging children in academics and leadership, and is a major sponsor of the county’s Battle of the Books program. Carroll County has three Kiwanis clubs: State Line, Westminster, and Mount Airy.

Over the years, he has served in many Kiwanis leadership positions, both locally and nationally. In 2014, Art was elected to a three-year term as a trustee of Kiwanis International, during which time he counseled nine districts in Europe, the Asia-Pacific region and in the U.S. In the fall of 2018 he embarked on a one-year term as vice president of Kiwanis International, and he is in line to be the next president of the organization. Art says it’s his commitment to helping kids become good citizens that motivates him to serve.

How did you first get involved in Kiwanis?
My father was a Kiwanis member locally, and when I was in high school I was active in Key Club [a Kiwanis-affiliated service organization for high-schoolers]. I went off to college and took a hiatus from Kiwanis but when I returned to the community I wanted to get involved, and service clubs are the best way for people to give back to the local community. I joined as a member in 1980.

How has Kiwanis changed since you joined?
The No. 1 change has been including women. Traditional service clubs started around 1915 and they started primarily as business networking organizations. Kiwanis evolved over the years into more of a hands-on service organization, primarily there to serve the kids. We realized that — maybe later than we should have — that women should be included in that, too, so women were admitted to Kiwanis in 1987. That’s the biggest change because having women involved gives us a different positive perspective.

The second-biggest change has been the Kiwanis expansion worldwide. We are growing in other parts of the world faster than we’re growing in the U.S. For example, Southeast Asia is growing like gangbusters — Nepal, Malaysia and the former Soviet bloc, too — I guess because there’s such great need in those areas.
Also, I suspect the needs of kids has changed. When I was in Key Club, our needs were less complex than they are today. Kids are facing a much more complex world, and we’re trying to give them opportunities to learn how to lead.

What drives you to be so active in this organization?
I believe in what we’re doing and see the success Kiwanis clubs have in communities around the globe. I’ve worked my way up through the ranks and at each level felt like we were doing good work for children that takes a different form in every community. Headquarters doesn’t tell us what to do; we’re as autonomous as each local community. Some clubs are involved in education, some security, some healthcare, there are many opportunities in each community to do what’s needed. We try to look at what the community needs and not duplicate what others are doing.

What are some challenges that Kiwanis faces in 2019?
The challenges of Kiwanis, as well as other service clubs, are to attract citizens who are interested in devoting 3-4 hours a month to projects that will improve the community. This is a challenge because of the great demands on time from employment, family, and other community needs. To do this service, organizations must communicate that the stereotype of a service club of a generation or two ago is no longer applicable. Today club formats are very flexible, membership is open to all community members, and the focus of each club can be altered to meet the interests of the members. Kiwanis is flexible to the needs of each community.

What do you enjoy most about your work with Kiwanis?
Meeting fellow Kiwanians around the world and interacting with the youth. It’s very rewarding for me to work with high school kids and see them develop. We encourage Key Club kids to come to meetings. They come as freshman and they sit in a corner and don’t say a word and you see them grow over the four years and by the time they’re seniors, you see them at a Key Club convention designing and running workshops.

Can you detail an experience you’ve had in your position as vice president that really highlights the work Kiwanis does?
I have been fortunate to witness many memorable events during my Kiwanis career. The single most memorable moment was recently when I visited Cambodia. My wife and I had the opportunity to accompany a UNICEF team to observe immunization programs that are coordinated by UNICEF and supported by worldwide donations of Kiwanis. Kiwanis is primarily local but as an international organization we support activities helping children around the world. The latest initiative we have is titled the Eliminate Project. This is a multi-year effort to reduce the menace of maternal-neonatal tetanus from countries identified as epidemic by the World Health Organization. Kiwanis donates the money for the vaccines, which are in turn purchased by UNICEF. These immunization programs provide protection for women and all of their yet-unborn children. Additionally, we witnessed how this program is also being used for broader immunization programs and health education. We witness the need, the advances and the benefits of these efforts.

Who is Kiwanis for — who in the community should consider being a part of the Kiwanis mission?
I think people who have a passion for helping kids become good citizens. There are many different ways we can do that through Kiwanis. It’s not a 40-hour-a-week commitment. Folks can make a difference just giving a few hours a month. And Kiwanis is not religious and not political. Our membership is diverse and we’re always looking for new people to help us achieve our mission.

What is your life like outside of Kiwanis?
I’m a pharmacist by trade. I started my business here in 1975 — Washington Heights Pharmacy — and sold it in 2000. I retired in 2000 and went to work for Fairhaven. I live in Westminster with my wife, Vickie, who is a past president of the Kiwanis Club of Westminster and retired elementary school teacher, and I have three children and three grandchildren.

How does it feel to know that you are in line to be president of the one of the largest and most recognized service clubs in the world?
I am very proud of that accomplishment because I’m only the fourth member of this Capital District to become vice president/president, and two of the four were back in the 1920s. When I started I didn’t have my eye on leadership positions, but opportunities presented themselves and I thought I had something to offer. It’s very rewarding to assist kids in the community and to serve the kids of the world.