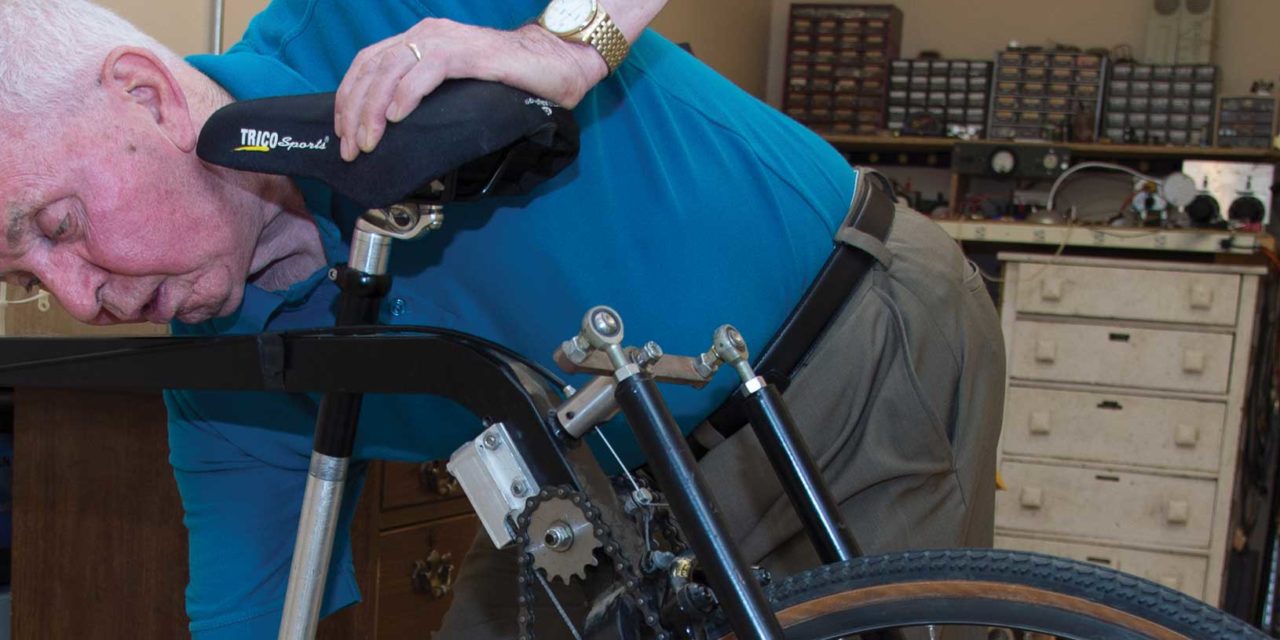 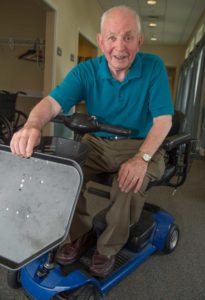 John Staehlin of Carroll Lutheran Village demonstrates a modified “scooter” cart with adjustable food tray which he invented for a friend. The tray device allows his friend to move through a cafeteria line on his scooter as he receives food.

John Staehlin has spent much of his life conceptualizing and building novel and unique devices with the goal of making life a little better for individuals living with disabilities.

WHO: John Staehlin, 86, of Westminster, has spent much of his life inventing things. After a robust career as a mechanical engineer for companies like Westinghouse and Northrop Grumman, Staehlin continues to invent.

He and his wife, Mary Louise, live in Carroll Lutheran Village and they stay busy with six grandchildren and three great-grandchildren. John hasn’t stopped tinkering; he puts his engineering skills to work through a nonprofit he started in 1982.

WHAT: “Thirty-five years ago when I was working at Westinghouse, I decided I had more inventions and ideas than Westinghouse needed,” Staehlin said.

He started a nonprofit called Volunteers for Medical Engineering (VME) which brought together engineers to conceptualize, design and create medical devices and tools for people living with disabilities.

“It was just an area where I saw a need and I had ideas that I thought could help,” Staehlin said.

And help is exactly what he and his team of volunteer engineers and medical advisors has done. One of the first of hundreds of inventions to come out of VME was a hand closure device to restore the grasp of a man with quadriplegia. Staehlin helped to conceptualize the wheelchair accessible seats that were eventually used at Camden Yards and Ravens stadium. Volunteers at VME also designed, built and manufactured stand-up wheelchairs so people can be standing but mobile and a BLINK system that allows individuals with quadriplegia to communicate through a computer with eye blinks.

“I had the fortunate ability to conceptualize devices and so I figure I can help people with their problems by developing devices for them,” Staehlin said. 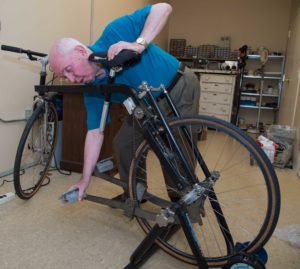 For individuals who want to ride a bicycle but who have limited range of motion in their legs, Staehlin has invented a bicycle which is propelled by levers instead of rotating pedals.

WOW: Staehlin said he’s been granted close to 30 patents for his work, and he’s not finished yet. He has designed a device that opens opposing doors at the same time for those in wheel chairs – it would simultaneously open a storm door opening out and a front door opening in. He has been invited to present this idea in a Shark Tank style event at the Leading Age conference in Indianapolis at the end of October.

His work has not gone unnoticed locally either. How could it when he even involves his fellow residents at Carroll Lutheran Village in his philanthropic activities?  Recently, Staehlin and a group of CLV residents assembled a hand device built to restore the grasp of children with shriveled or deformed hands. The device is a glove that sits on the hand and when the user bends his or her wrist, the hand closes.

Staehlin is being recognized by the Community Foundation of Carroll County as Philanthropist of the Year for his continued commitment to making a positive impact in the lives of those with disabilities. When asked about his success, Staehlin quickly points to those around him who have helped support the work he does – from other engineers who volunteer for his nonprofit to medical advisors, to those with disabilities who give him feedback and inspire him and to his fellow residents at CLV who happily volunteer their time.