Never Too Late… To Join A Band! 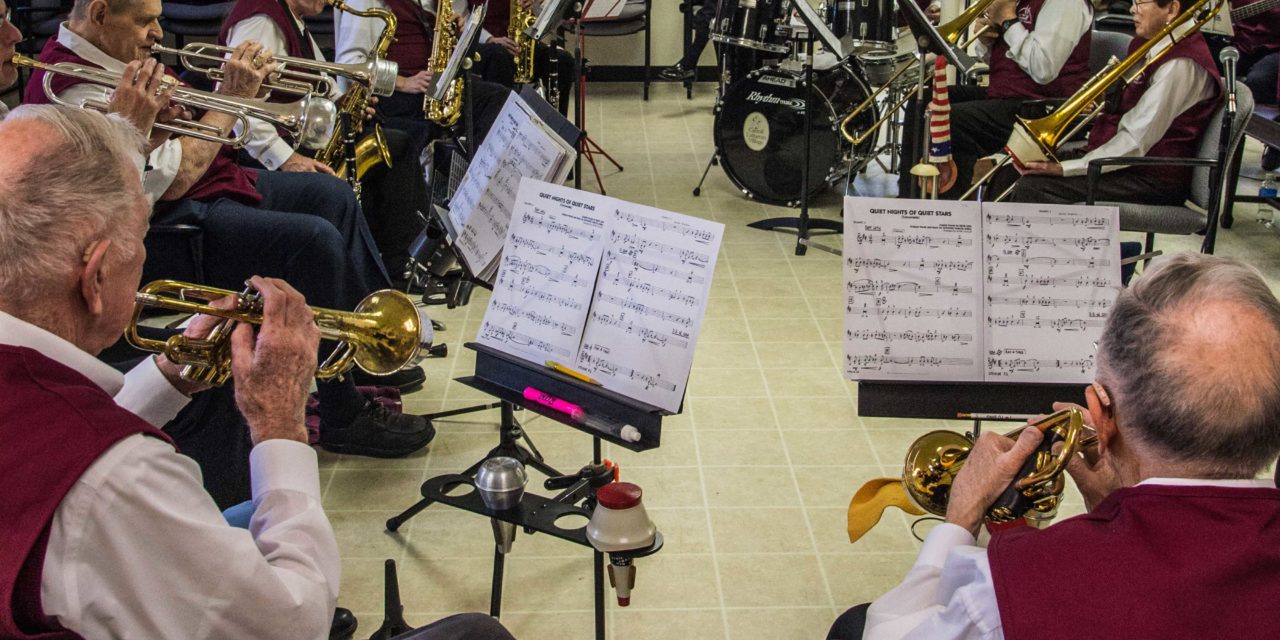 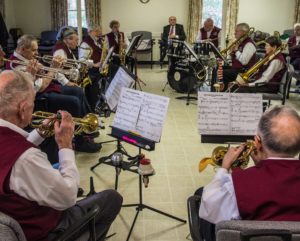 WHO: A quick scan of the room shows the typical signs of an older crowd: mostly heads of white hair, lots of eye glasses, several hearing aids, and a walker. But don’t be fooled by their ages which range from 61 to 90.

Rather, listen to the music as the fifteen members of the energetic, albeit older, Never Too Late Band recreate the toe-tapping, get-your-body-moving sounds of dance music hits from the era of jazz and swing big bands. Or, in the style of big band greats like Glenn Miller and Tommy Dorsey.

Eight of the 15 band members are Carroll Lutheran Village residents, with the rest spread throughout Carroll and Baltimore Counties. In their professional lives, they were music educators, school administrators, an engineer, a lawyer, a small business owner, and more. A few are still working.

Most of the band members can play multiple instruments and have actively participated in community music groups throughout their adult lives. One, John Newcomb, 85, learned to play drums as a child, played in high school, then didn’t play for 57 years before joining the Never Too Late Band nine years ago. Others, like Barbara (alto sax) and Glenn Patterson (vocalist), both 79, have been involved with music throughout their lives as educators and performers in local music groups.

Together they bring, literally, centuries of musical experience to this band and as they pursue their love of creating and performing music.

“For us,” Barbara Patterson expressed, “this is a necessity of life.” 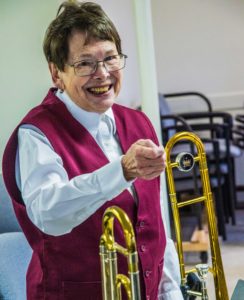 Norma Allman is the band manager. She and her late husband, Neale, formed the band in 2005.

WHAT: When Norma and her late husband, Neale Almann, moved to Carroll Lutheran Village in 2005, they brought a lifetime of musical experience as retired instrumental music teachers in Baltimore County. Neale also brought his large library of big band music and his hope of starting a band among the residents in their new home. They were fortunate to find six like-minded instrumentalists and a singer and the Never Too Late Band began.

The Allmans hosted the first rehearsals in 2006 in the bedroom of their apartment where they had a keyboard and the small group just had fun making music together.  One day, they held a rehearsal in one of the public spaces at the Village and another resident recognized their potential and asked the band to play at an event.

Since that time, the band has grown to 13 instrumentalists and two vocalists. They play Big Band music arrangements from the 1930’s, ’40’s, and ’50’s, including jazz, swing, polkas, Waltzs, Latin pieces, and more. Their activities are supported by Carroll Lutheran Village, with a regular practice space and instrument storage space, an electronic keyboard, uniform vests, and a banner to display at jobs.

The Band typically plays about a dozen jobs a year including ones at Carroll Lutheran Village and around the community at local church events, parties, and meetings.

“Our jobs last about two hours, and our fees are nominal,” explained Allman. “Members of our band are not paid. We just cover our expenses.” 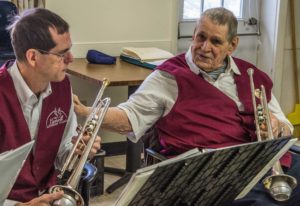 WOW: Each Thursday afternoon the Carroll Lutheran Village Clubhouse comes alive for two hours as the band gathers for rehearsal. Joy is in the air as members unpack and warm up their instruments while trading greetings.

Once everyone is settled, Norma Allman begins the formal rehearsal: announces the piece, counts off, and music fills the room. And the music is really good.

“All of our music is dance music,” explained Norma Allman, “and when we play a job, it is such fun because there is so much activity. My favorite is Latin music because it has a nice beat and is ‘happy’ music.”