Nonviolence Calls for Courage and Action 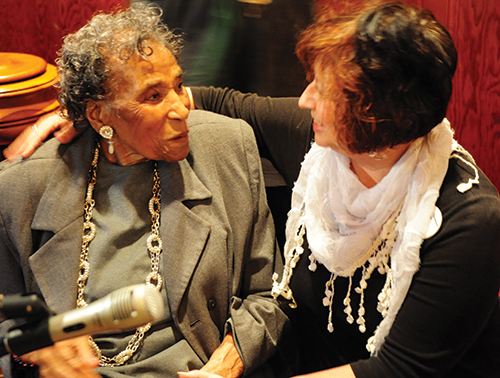 Mrs. Amelia Boynton Robinson, 108, a veteran of harassment and violence under segregation and a worker in the Selma Voting Rights movement, with the author in Tuskegee, Ala., in January 2014.
Most Americans today know Dr. Martin Luther King Jr.’s name and that he “had a dream.” Beyond that, our national knowledge of MLK, and of the American civil rights movement is sketchy.
We have let our memory lapse.

We have forgotten King’s thinking on matters that still challenge us, such as violence (on all levels, from the international arena to the schoolyard bully), how to create positive change, and our responsibilities to one another.
Even less understood is the strategy he used.

King studied nonviolence and put it to real-world use in the successful struggle against segregation. He knew that success would depend on many people understanding nonviolence, he asked James Lawson, who had learned Gandhi’s methods during time spent in India, to help.

In Nashville, Lawson trained people, many of them college students, in the philosophy and strategy of nonviolent social change. (Most people are surprised to learn that nonviolence isn’t about just holding spontaneous demonstrations, but requires training and discipline.) Lawson’s training lasted for several months, producing leaders for Nashville’s lunch counter sit-ins that ended discrimination in public accommodations there.

One of those students, Bernard LaFayette Jr., has said they were in “a nonviolent academy” that, “like West Point,” produced warriors — warriors who fought with different weapons.

Some people, however, say nonviolence can’t work now, that the world has changed and that our problems are so much worse than the ones faced by members of the civil rights movement.

Dr. King knew that violence is a trap, leading us only to more violence. He knew that violence could backfire, having many unexpected negative consequences. And he saw the relevance of nonviolence for the future. He knew that nonviolence is, at bottom line, successful problem-solving. And that in actuality, it is all around us. We use it every day when we solve problems without resorting to violence. And while the world and some of the problems we face may have changed, nonviolence offers an approach that works now, just as it did 50 years ago.

As King understood, this approach can be challenging. It is active, not passive. It requires courage and a willingness to risk and sacrifice to achieve goals; it asks that we avoid dividing the world into “us” and “them,” to think of how to turn adversaries into allies; it reminds us of the danger of personalizing problems and of harboring grudges and resentments.

I learned that first at Western Maryland College.

Dr. Ira Zepp, who marched with Dr. King in Selma, Ala., taught us students how to use nonviolence to make lasting change in our world. For nearly 20 years, I’ve worked with Dr. Bernard LaFayette, who took Dr. King’s exhortation (on the day of his death) to “institutionalize and internationalize nonviolence” as his life’s work.

Charles Collyer, my partner in the Ira & Mary Zepp Center for Nonviolence & Peace Education, and I study and teach nonviolence with “Doc,” as Bernard is known. Every January, we co-sponsor a trip south to sites where nonviolence campaigns took place during the civil rights movement. We talk with veterans of those campaigns who are still using nonviolent problem-solving to address current community problems and who are teaching those methods to new generations.

Last January, I spoke with Mrs. Amelia Boynton Robinson, who was part of the Selma campaign. She is now 108 years old and still doing the work. She said she had been trying to figure out why she had lived so long.

“I finally figured it out,” she said. “It’s because I have never hated anyone in all my life. I just refused to hate.”

Refusing to hate. That’s the relevance of nonviolence. And the power.