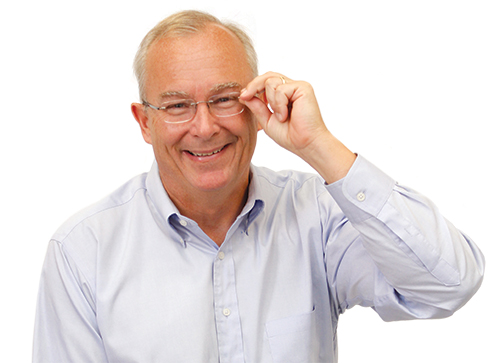 “Person of the Year is well-deserved. Robert has done a tremendous amount for betterment of many facets of our community. City Councilman, author, athlete – he has done it all. He is the epitomy of a Renaissance man.”
– Tony Chiavacci, Council Member

“Robert thinks big and doesn’t let barriers discourage him or his team. He gives generously of his time, volunteering for many organizations in the community such as Access Carroll. He is confident in purpose and instills faith in his ethics. He is someone you know you can trust.  Robert is also humble and immediately puts you at ease. With as accomplished as he is, there is no pretense about him. I can see where children would love having him as their doctor. I am privileged to call him my colleague and friend.”
– Jennifer Teeter, Access Carroll Board Chair

“I’m tickled that my older brother is Person of the Year. Between all the hard work he does with the hospital, the health care clinic and the City Council, he certainly has earned it. He does this all while raising three beautiful children, keeping his wife reasonably happy, and writing novels. I’m not sure where he finds the time. I’m proud to be in his family.”
– John Wack, President, Eastern Sports Management

“I recently reflected on Carroll County’s successful fiber optic broadband infrastructure network beginnings and fondly recalled the many early Carroll Technology Council meetings to discuss the issue. Dr. Robert Wack was front and center in the public discourse from the very beginning and articulated a passionate future-oriented vision for the county where businesses and residents have high-speed broadband service access and choice. … Dr. Wack is an inspirational and strategic leader that is respected for his galvanizing efforts to advance high-speed broadband access throughout our community.”
– Denise Beaver, Secretary, Carroll County Economic Development

Westminster resident Dr. Robert Wack could have been named Person of The Year ten years ago when he was featured in Carroll Magazine.

Seemingly a superhero then, Wack is currently the Director of Pediatric Services at Frederick Memorial Healthcare Systems and the president of Westminster City Council.

He is also Carroll Magazine’s Person of the Year.

The blend of intellect, compassion, curiosity and drive that brought Robert Wack to the local forefront ten years ago has vaulted him to the helm of a broadband initiative that will revolutionize how businesses are recruited to Carroll County and then run here.

The new high-speed fiberoptic network will also save individual users money and time.

“Well known in the policy circles of Washington DC as a go to resource on broadband, Dr. Robert Wack has been an innovative driving force to bring broadband to Carroll County,” said Kati Townsley, Carroll Technology Council member. “He was instrumental in the early days of the creation of the Carroll County Public Network and the driving force behind the City of Westminster’s desire to become the next “‘Fiber City’ in America.”

Chattanooga, Tennessee is the only other city to break similar ground. And true to his penchant for collaboration with people who have the expertise he temporarily lacks, Wack tapped Chattanooga’s mayor Andy Berke for advice.

If Chattanooga’s current business boom foreshadows what is to come for the Westminster, the future is beyond bright.

In a recent article in CNN Money, reporter James O’Toole notes that the network “helped spark a burgeoning local tech scene and the relocation of a number of businesses.”

On September 17, 2013, Brian Fung reported for The Washington Post: “They may not realize it, but starting today, some high-end Internet subscribers in Chattanooga, Tenn., will turn on their computers and start browsing the Web at a gigabit per second — 10 times the speeds they’re used to. By month’s end, some 39,000 area residents will see their mid-tier connections become twice as fast — from a current 50 megabits per second to 100. Better yet, the majority of these customers won’t pay a penny for the upgrade.”

The way Wack continues to lead the broadband venture mirrors the way he has lead other projects during the last decade. He identifies a need that is linked to quality of life. It’s rarely a small need; Wack migrates toward the seemingly insurmountable.

And then the following hallmarks of Wack’s leadership unfold: extensive research, the right stakeholders around the table and a unique blend of logic, flexibility and humor to dismantle hurdles. Though he may be the key leader, Wack delegates critical pieces of projects to others with the needed expertise and ensures that success is never his alone.

Blooming from his roots as the former director of hospital-based pediatrics at Carroll Hospital Center, Wack transformed the second floor of Frederick Memorial Hospital into a Pediatric Unit that combines the Pediatric Emergency Department (Peds ED) and the Pediatric Inpatient Unit.

“Kids in this area get great care at the FMH combined unit,” said Dr. Nima Hendi, pediatrician with the Pediatric Center of Frederick and former Chief of Pediatrics at FMH. “I’m very comfortable with him leading it – it would take a very special person to lead this – good communication skills, competent, caring, vision – he’s done a fantastic job and it has helped the kids of Frederick county and other counties that come to FMH for services.”

Wack is no longer an aspiring author, he is one.

This year, Boissevain Books released Time Bomber, a work of fiction set in France during the days surrounding D-Day. The book depicts the bravery and sacrifice of soldiers and infuses the thrills and possibilities of time travel. Ever-so-Wack, the book launched from insatiable research done by scientists and scholars in the era, most notably Dr. Willem Jacob van Stockum.

“Robert devoured science fiction books as a kid, and combined with our father’s experience in WW2 surviving a land-mine explosion as a double amputee, his novel masterfully combining these two themes is only natural,” said his brother Ed Wack.

Robert is a graduate of Notre Dame and the Georgetown University Medical School. After graduation, he served with the U.S. Army Medical Corps in Germany and Hawaii.

Robert Wack lives in Westminster with his wife, Lisa, who is the Health Benefits Exchange Program Manager at The Partnership for A Healthier Carroll County. Robert and Lisa proudly parent Sarah, Michael and Jeffrey.