Police Gear Up For Halloween “Crimes of Boredom” 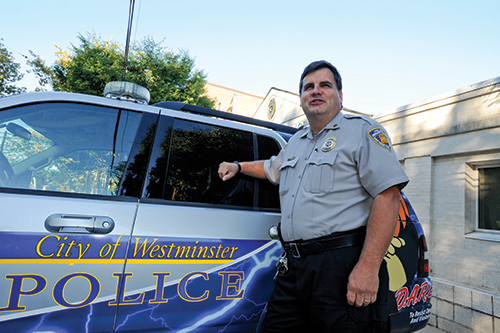 Sgt. Keith Benfer of the Westminster Police Department says that Westminster attracts trick-or-treaters because there are more houses in the city.

Trick-or-treating is intended to be high on treats and low on any trickery. Still, there might be some bad apples out there on Halloween – and not of the caramel-covered variety.

That is why police caution parents and kids to be vigilant, and for adults to be present as children go door to door in search of sweets. That message goes out every year from Carroll County’s police departments, which work to ensure that October 31 stays just as safe as any other evening.

Fortunately, there has not been much recently in the way of incidents that would rattle families and inspire kids to tell stories to their friends by the glow of a flashlight.

The lone case of note came in 2010, when a man carrying a machete allegedly chased after a few people who were outside of a convenience store in the southern part of the county, according to The Carroll County Times. He was sentenced to probation before judgment and community service on one count of second-degree assault, and the rest of the charges against him were dropped, according to online court records.

The rest of what goes on during All Hallow’s Eve tends to be cases of petty vandalism, the kind of juvenile incidents that Taneytown Police Chief W.E. Tyler calls “crimes of boredom.”

These cases can happen in the time leading up to Halloween — the day before is known colloquially as “Mischief Night” — on the holiday itself, and in the days that follow. Most often, what Sgt. Keith Benfer of the Westminster Police Department sees and hears of is smashed pumpkins.

“You see that stuff all week long before and all week long afterwards,” said Benfer, the department’s community education supervisor. “That’s probably the most vicious thing we see.”

Sgt. Shawn Kilgore of the Sykesville Police Department said he could not recall any serious incidents beyond one case of an argument and assault involving a person who had been drinking.

“I wouldn’t say our problem is any different at that time of year than any other time. We don’t have any Halloween-specific destruction issues,” he said.

Nor are there reports of tainted candy these days; prepackaged treats long ago replaced homemade items.

There still are plenty of good reasons for police and parents to be around during trick-or-treating, though. Those reasons, of course, are kids dressed in costumes.

“We just try to be more visible,” said Benfer. “A lot of people who live outside the city limits come into Westminster because there are a lot more houses to trick or treat at. You still need to be vigilant with the kids. It’s another set of eyes to help us, because we cannot be everywhere. If you see something suspicious, you can call us.”

Westminster has the same level of patrols on Halloween as normal, including bike patrols and police equipped with radar guns to limit the amount of vehicles speeding on the roadways, said Benfer.

(Halloween “is the deadliest night of the year for pedestrians,” according to a report released by AAA.)

In Sykesville, the Police Department, as it does at other times of the year, calls on a volunteer auxiliary force to supplement other officers who are on duty in cars and on bicycles, according to Kilgore.

“Because of the influx of people that we see between the hours of six and nine, there is a lot of stuff happening,” said Kilgore. “Calls for service don’t stop just because it’s Halloween. I think it was two Halloweens ago that I ended up with an arrest for marijuana. That took me off the road. The volunteers are a phenomenal resource for us to supplement our patrols, because we’re a small department and we don’t have an overabundance of officers. A lot of the stuff we do probably wouldn’t be accomplished as easily if it weren’t for them coming in and giving us a hand.”

Taneytown police “saturate the town” and also hand out glow sticks to help keep kids visible as dusk rolls in.

“Everyone we have here on the force works on Halloween,” said Taneytown’s Tyler. “It’s the one time of year when we get a bunch of young folks – teens to toddlers – who are all out on our streets. And whenever we have that many people in an area, it’s definitely a safety issue, especially for traffic.”

But trick-or-treaters and adults alike have much they should keep in mind — to “support our actions through reinforcement of safety,” he said.

Kilgore’s advice: “The best thing we can do is preach that kids use common sense: Don’t eat candy until your parents look at it. Wear something [reflective] that’s going to make you stand out when walking in roadways and on sidewalks. For parents, obviously accompany your kids or allow them to go with someone you trust that’s going to keep an eye on them.”

Although registered sex offenders are told they are not allowed to give candy out on Halloween, Kilgore still recommends that parents look at the sex offender registry, “not to single them out, not to harass them, but just to know who lives in the neighborhood where you’re going to be sending kids to trick or treat.”

Taking these tips into consideration means that the focus for the night can remain on the treats. Tyler also had a tip on the topic of tricks:

“What will happen is you’ll get these kids who come in and buy three dozen eggs,” he said. “We have some businesses up there that won’t sell them eggs if they don’t have IDs.”