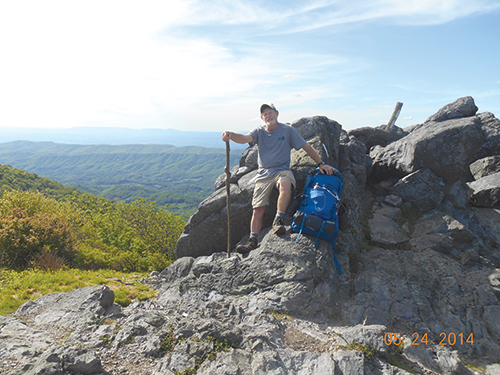 The trail meanders through towns of various sizes and dialects. From Mount Katahdin, Maine, the northernmost section of the trail, to its end at Springer Mountain, Ga, rivers, streams and brooks parallel and cross, waterfalls unleash, and swamps and bogs challenge hikers on the southern terminus.

J. Michael “Mike” Robbins, a lifelong resident of Silver Run, set out from Springer Mountain on March 26. For Robbins, the hike was a gift after retiring from the Maryland Department of the Environment.

“I’d originally planned to do it with my two sons when they were old enough,” Robbins said. “Now they are in their 30s – that possibility didn’t work out.”

Nor did his plan to hike the trail with a friend and colleague from a local Sons of the American Legion pan out, Robbins said. Unfortunately, his friend discovered he had serious medical issues.

So Robbins set out solo.

By mid-August, Robbins was on the trail in Gorham, N.H. He took a brief hiatus from the challenges of hours of daily, grueling hiking and met his wife, Georgia Myers, at an area motel.

“Most of the hikers have a trail name and mine is Solo Amigo,” Robbins said during a telephone interview. “I hiked over a thousand miles to Harpers Ferry, where I met a fellow hiker, Terry Little from Taylorsville, N.C., on the trail. After conversations with him, we decided to do what they call a ‘flip-flop.’ We went up to the northern terminus, at Katahdin, and now we are hiking south back to Harpers Ferry.”

In Maryland, the trail runs through Crampton Gap, at Gathland State Park; and the Washington Monument State Park, both in Frederick County.

The siren call of the trail has lured people to its natural environs since it was first hiked in its entirety, in 1948, by a World War II veteran, Earl Shaffer of Shiloh, Pa. Jr It is estimated that 2.3 million people visit various sections of the trail every year. More than 15,000 people have hiked the entire trail; and thousands complete the journey each year.

Robbins said the Maine section of the trail is extremely rigorous. The daily routine involves hiking for eight to 10 hours over rocky, steep terrain.

“We are in New Hampshire right now and we are about to take on the challenge of the White Mountains,” Robbins said. “Some of the mountains are over 6,000 feet and have some of the most severe weather in the United States.”

For Robbins, meeting a diverse group of hikers–kids just graduating from high school or college, or recent retirees who are physically able to hike the trail–has been one of the benefits of the challenge. Robbins is 67 and Little is 65.

“Physically, it’s very challenging for our age group,” Robbins said. “It is such an interesting group of people you meet on the trail.”

Robbins and Little had just completed the Mahoosuc Notch, in southern Maine, which features a mile-long stretch of boulders. It is considered by many to be the most difficult part of the trail to traverse.

“Climbing over and under blocks of granite and very angular pieces of rock which have fallen off a cliff that fills a chasm, with a 20-30-foot drop, you have to be extremely careful,” Robbins said. “Keep in mind, we are carrying a full pack weighing 45 to 50 pounds, doing these traverses across these sections of rocks, while being very mindful of our center of gravity.”

Rain, mist, fog and overnight temperatures ranging between 40 and 50 degrees make for a chilly night, Robbins said. On June 15, Robbins and Little had made it to the summit of Mount Katahdin.

“We couldn’t see much,” Robbins said. “The day before it was brilliantly beautiful, but that’s the luck of the weather in Maine.”

Every 30 days, Robbins tried to meet with his wife. As part of his ritual, every time he would get atop a summit and he could get a cellphone signal, he called her to keep her informed.

“She has been very supportive of my efforts,” Robbins said.

He hopes to complete the trail sometime in October.