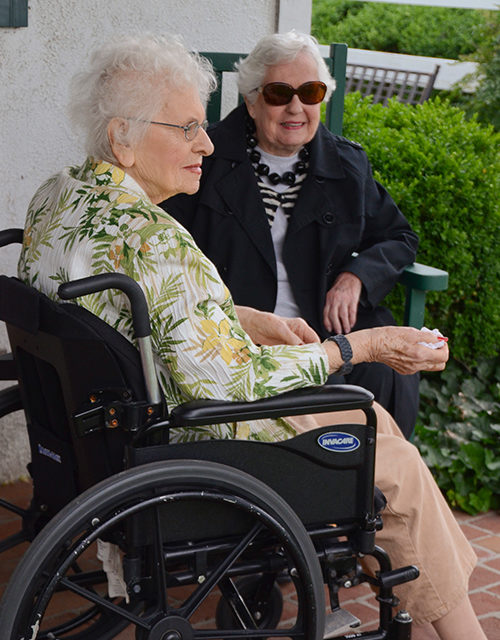 Charlotte Hall and Jeanne Graef, who met while freshmen at Western Maryland College, seeing each again after over 40 years.

The world was changing in 1941, with the United States pulling itself out of the Great Depression and entering the Second World War.

It was also the year that two young women would embark on a life long friendship that would continue to bring them both joy and comfort for more than 70 years.

Seventy-three years after they met as freshman at Western Maryland College and 40 years since they last saw each other, Charlotte Hall and Jeanne Graef had a lot to talk about when they met for tea in Westminster this summer.

Born and raised in Baltimore, Charlotte “Mac” MacConnely went to Western Maryland College and majored in home economics. It wasn’t long before she found herself a part of a group of eight girlfriends all in the Sigma Sigma Tau sorority.

Jeanne “Job” Williams moved around a lot as a child, and in 1933, her family settled in Frederick, where her father opened an office machine business. She earned a full scholarship to Western Maryland College where she majored in history. It wasn’t long before she found herself a part of a group of eight girlfriends all in the Sigma Sigma Tau sorority.

Charlotte, who is 92 and currently lives at Carroll Lutheran Village in Westminster, says she has fond memories of Jeanne at Western Maryland College.

“I didn’t get a scholarship like brains over here,” Charlotte joked, pointing at Jeanne when the two reunited.

Jeanne acknowledged she received a scholarship but said she was too immature to take advantage of it and “flunked out” her junior year.

But for 2 ? years, the two young women learned, laughed and grew up together.

“Jeanne was fun,” Charlotte said. “We just had a special relationship.”

“I just had good feelings about her,” Jeanne said of Charlotte. “She was someone you could count on.”

Jeanne said it was an interesting time to be in college with the start of WWII.

“Our freshman year the war started so before long, the campus consisted of male students who were going to be ministers or who weren’t physically going to be in the service,” Jeanne said. “It was a different atmosphere once the war started.”

Charlotte said she and her girlfriends paid attention to their studies and played bridge whenever they had a free minute.

“I had a wonderful four years in college, we had a great time,” Charlotte remembered. “We were not party girls, but we had a good time.”

Jeanne and Charlotte went their separate ways after college.

Jeanne married Harry Graef, an architect, in 1949, and eventually they had three children: Harry IV, Kristine and Julianne. She opened a retail clothing store with friends and the couple settled down in Northern Virginia, where she still lives today. Her husband of 58 years died in 2007.

After the friends married and had children, they still managed to find time for visits.

“When we got together with our husbands, they clicked and appreciated each other,” Jeanne said. “Mac is always someone I can say I admire, she’s a good person.”

And then, according to Jeanne, life got busy and for decades their communication dwindled to Christmas cards and occasional letters.

Thirty-seven years ago Charlotte became good friends with her Eldersburg neighbors Jack Pettit and Francine Dalton. The three have remained close friends, and it was Jack and Francine who were inspired to get Jeanne and Charlotte together.

“Jack and I were visiting Charlotte one day last spring and she showed us a letter she had received from Jeanne and told us how much she’d like to see her friend again,” Francine said. “Jack and I looked at each other and knew immediately we would see to it for her.”

Neither Charlotte nor Jeanne could say exactly how long it had been since they had last seen each other, but both say it had probably been at least 40 years.

The two met for tea and lunch at Gypsy’s Tea Room in Westminster. Francine and Jack attended the lunch as well as Charlotte’s daughter, Terry Renehan, of Carroll County, and Charlotte’s son, Mike, and his girlfriend, Susan Yates, who were both visiting from Florida.

The conversation at the reunion was lively – the old friends laughed about their time at Western Maryland College, they filled each other in on their children’s lives, and they commiserated about life at 90.

Jeanne, who lives in a retirement home in Alexandria, Va., said it’s hard for her to be as independent as she’d like because her children took her driver’s license when she turned 90 earlier this year.

“We don’t live that far apart, but it hasn’t been easy to get together,” Jeanne said. “But we finally connected.”

Charlotte said it’s hard to believe that she and Jeanne are the only ones still alive from their close group of eight sorority sisters.

“Sadly, Jeanne and I are the only ones left,” Charlotte said.

Since having tea, Charlotte and Jeanne have spoken on the phone several times. They said they intend to keep in touch.

“Seeing her didn’t make me feel any younger,” Charlotte laughed. “She looks so good. She looks the same. She was the same old Jeanne.”