Ribald Rolling For Fun and Philanthropy 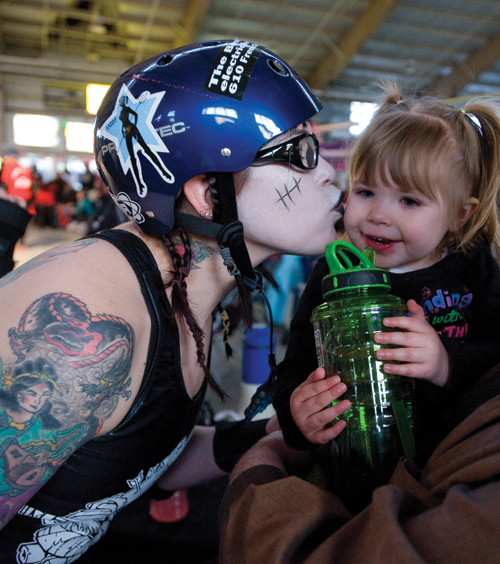 During the workday they are lawyers, lobbyists, chemists, rock band roadies, technical illustrators and parents with names like Jeff, Tim, Nick. Cathy, Jim and Brandy.

But when the Shipley Arena in Westminster is converted into a roller rink for their five competitions each year, Chesapeake Roller Derby members don pirate attire reminiscent of the French Quarter during Mardi Gras – and go by names like Beef Hellington, Sinderhella, The Dalai Trauma, Torque Chop and Marzipain.

Maryland’s only co-ed roller derby is like a Disney movie packed with double entendres. A derby member named Piece of Lass, for example, sang the national anthem so beautifully at a March 26 competition that she had the audience weeping.

Co-announcers Homescar Runner and Major Anxiety told the nearly sold-out crowd about donations for the Community Foundation of Carroll County and The 6th Branch, a veteran-guided service organization.

The juxtaposition of family fun and “Wow! Can they get away with this?” humor carries to the sidelines where the festivities feature coloring contests, face painting, skull mugs filled with candy, jewelry sales, pirate memorabilia and costume butterfly and angel wings (selling for $50 each).

Crowds roar with laughter over the potpourri of sights, sounds and what the derby’s website calls “PG-13 level banter,” and when the games are over and winners are declared, organizers take pride in knowing that they brought people together, raised money for local charities and had a great time doing it.

“We’ve donated to cancer research and the ASPCA. Charity work is what we are all about,” said Jeff Tomhave, who has been in the league since he and his wife, Brandy Tomhave (aka Marzipain), launched it two years ago.

Every team member interviewed identified “camaraderie” as their first attraction to the sport, followed closely by the excellent workout and their love for giving back to the community.

Team members, whose ages range from 20 to over 50, have fought cancer, lost loved ones, lost jobs and even homes, and yet they say they found solace in knowing that they are part of what many of them call a roller derby family.

“I like the spectrum of people,” said Nick Gleason-Smuck (aka The Dalai Trauma). “Everyone is welcoming and open minded. And talk about camaraderie… We all do it for fun, and we get in shape.”

Word of mouth, the team website, “Become a part of the Crew” posters and the derby competitions that are Chesapeake Roller Derby’s most effective recruitment tools.

Owings Mills resident Tim Gibson (aka r2DTIM) had resigned himself to the notion that he just would not be able to join a roller derby because for a long time, the closest team was an hour and a half away. Then, one day he found a promotional card in a coffee shop. He responded, discovered Chesapeake Roller Derby’s magic and he was hooked.

“I got the coolest email back,” Gibson said. “It was clear that they welcome everyone. Marzi wrote that if I had skates, bring them. If not, they could find some. She asked if I skated, but if I didn’t she offered to teach me. This is the most inclusive group that I have ever encountered.”

Brandy’s peers call Marzipain the “ heart and soul,” and “the mother hen” of the group.

“Once the hot flashes started, I decided I was too old to skate,” said Tomhave. “But I still had a lot of talent, so I started coaching. I’m really excited about this year. We have 10 new skaters out of about 20 total, and everyone participates”

The group’s roster is broken into three teams (the Land Hos, Rolling Plunder, and Vampirates) that each have seven to nine players, and practice together. The derby has scheduled five intra-squad matchups; two teams face off while the third team serves as referee.

Chesapeake Roller Derby runs more informally than teams in neighboring states. Unlike many other teams, for example, Chesapeake requires no dues. Derby members do not have to go through the sometimes arduous task of filing for an official derby name.

The team practices every Tuesday and Thursday evenings from 8 until 10 p.m. Derby members also practice in Phoenix, Maryland, on Wednesdays from 7 until 9 p.m.

“I’ve dropped 20 pounds and my teens cheer for me,” said derby member Jim Stahl (aka Deuce Eckes), a 51-year-old contractor. “They don’t care that I dress like an idiot. It’s theater, and sometimes it hurts a lot.”

“At first I was nervous,” said Tim Gibson. “We are competing in front of a lot of people. But it’s a blast and people seemed to enjoy it. Sore? I was very sore after the last game. My ribs hurt the whole next day. During practice we do blocking, but in a real bout, you get knocked on your shoulder. Most of the following week, I hurt.”