Roam Free or Rein Them In? 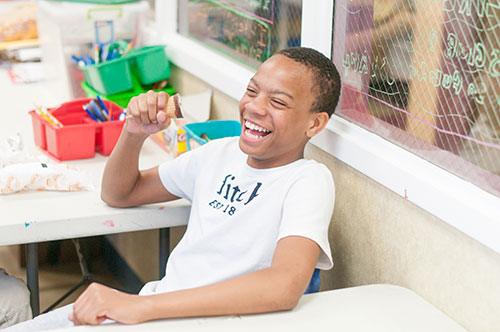 Damontae Summers spends his time after school at the Boys and Girls Club in Westminster.

by Jeffrey B. Roth, photography by Walter P. Calahan

As a new mother, Kelsey Ratcliffe, 26, doesn’t know how much unsupervised freedom she may eventually grant her child.

Yet Ratcliffe grew up in Chester County, near Philadelphia. The youngest of five girls, she came from a household where both parents worked full time.

“I lived in a house beside a river, in a wooded area,” she said. “It was a family neighborhood. We knew all of our neighbors.”

Danielle and Alexander Meitiv ignited a national conversation on parenting styles after they allowed their 10-year-old son, Rafi, and 6-year-old daughter, Dvora to walk the eight-tenths of a mile home unsupervised from a Silver Springs park last December. Montgomery County Protective Services investigated, eventually finding the couple guilty of “unsubstantiated child neglect.” In April, the parents were back in the news after someone called 911 to report the children walking home alone again.

The couple maintains their free-range parenting style encourages independence and helps in their children’s development. Authorities say it is inviting danger.

In a report titled “The Importance of Play in Promoting Healthy Child Development and Maintaining Strong Parent-Child Bonds,” the American Academy of Pediatrics says free play is important for childhood development. That report doesn’t address how far children should be allowed to roam from their homes without parent supervision, but it does say, “The challenge for society, schools, and parents is to strike the balance that allows all children to reach their potential, without pushing them beyond their personal comfort limits, and while allowing them personal free time.”

“Current changes in childhood are more dramatic than at previous times in history,” said Gregg, who grew up in Baltimore in the 1950s and 1960s. “Media allows people to see things all over the world quickly—TV, movies, all kinds of ways. Violence has always existed, but we have much more access to it. That has impacted everyone, but especially children.”

The ability to amuse one’s self is a skill that children need to learn, Gregg said. Carroll State’s Attorney Brian DeLeonardo said in some cases, parental fears have resulted in over-protection. Children are at greater risk today to be enticed into something potentially dangerous, thanks to the Internet and social media.

Gregg said when she was growing up, the majority of mothers stayed at home and did not have full-time jobs. As a child, she had the freedom to roam around the neighborhood. If her mom didn’t know where she was, some other mother in the neighborhood did, but that doesn’t happen anymore. “We rode bikes everywhere,” Gregg said.

“We rode buses everywhere. We walked to the store, and now they don’t do any of that because of the amount of cars on the roads and the way the roads are built.”

Ratcliffe, now the mother of a 3-month-old daughter, said explaining dangers to a child is important.

“Children need to know their communities and learn who they can trust,” she said. “Eventually, you have to trust your kid and know you raised them well.”

Talk to local youths and they offer hope that not all roam-free time is dead.

Damontae Summers, 13, a student at East Middle School, who attends the after school program at the Boys and Girls Club of Westminster, said during the school year he must be home in bed before 10 p.m.; but in the summer he is allowed to stay up until midnight or 1 a.m.

“When I’m out playing, I have to call or text my mom to tell here where I am,” said Damonte, who enjoys lacrosse. “If I don’t do it, I get in trouble.”

Damontae walks to school and, in the afternoon, he rides a bus to the Boys and Girls Club on Union Street. While he has some freedom to play in his neighborhood, he is limited to how far he can roam.

“I usually play outside,” Damontae said. “On weekends, if I don’t go outside, I stay inside playing video games. In the summer, I usually play football, and sometimes I go to the swimming pool.”

People in his neighborhood know each other, Damontae said. When he is allowed to ride his bike, he usually rides with friends, staying within the boundaries set by his mother. 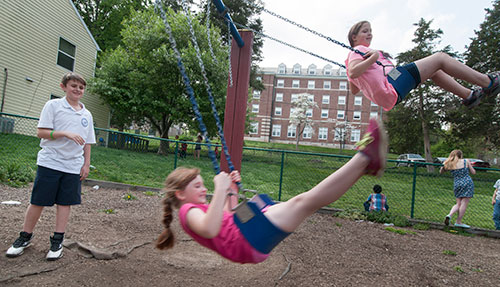 Cole Smith, Kayla Goodwin and Rylie Fuller on the playgrounds after school at Westminsters’ Boys and Girls Club.

Kayla Goodwin, 7, a first grader at Friendship Valley Elementary, comes to the program on certain days. Other days, she and her 11-year-old brother go home after school.

“I don’t go here in summertime,” Goodwin said. “My grandma works at a high school and is off work in the summer. She takes care of me and my brother.” Goodwin said the family has a circle of friends in her neighborhood. While she isn’t involved in organized team sports, she does take jiu-jitsu.

Eleven-year-old Cole Smith, who attends fifth grade at St. John’s Catholic School, lives in town. During a normal week, he spends three afternoons in the after school program.

“I have a motor scooter and I have friends in the neighborhood,” Smith said. “I have to stay within a quarter-mile of home. My parents trust me because I’m responsible.” Smith, who plays basketball and soccer, said he lives in a comfortable environment. He feels safe because he knows the people living there.

Another fifth grader at Friendship Valley Elementary, Rylie Fuller, 10, said her home is located on a road with a big court at the end. That court is the boundary she must respect whether she’s on foot or riding her bike.

“I’m in field hockey and I take dance and gymnastics,” Fuller said. “I like this community and I know a lot of people in my neighborhood.”