The Battle For ZZZ’s: Sleeping Disorders Are On The Rise 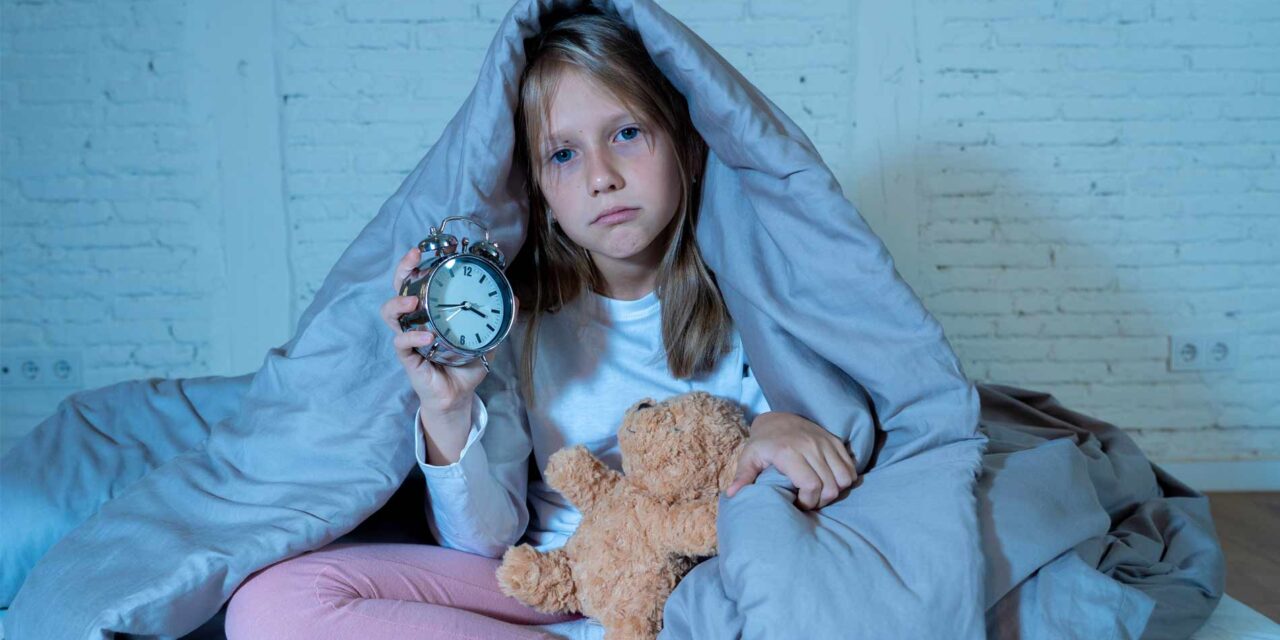 They say what’s old is new again and we thought in light of the chaos children have endured in the past few months, this article on children’s sleep issues previously published in Carroll Parent Magazine might be helpful to local families. While there are more recent studies about sleep since this published in 2009, the information about the importance of sleep, certain disorders and treatments, remains relevant. 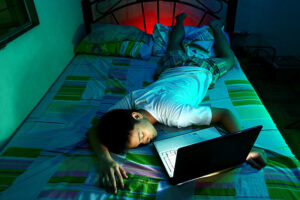 Mommmm!” you hear from down the hall. Or it may be, “Dadddd!” You look at the clock – it is 10 pm. You wait. The wailing returns.
You sigh as you flip the covers off and swing your legs out of bed. You shove your feet into your slippers and pull on your robe. Off you go. You identify which child has the issue and open her door.

“What’s wrong?” you ask your daughter.

You read her another story and sit and chat for a minute. Then you tuck her in again and kiss her on the head and leave.

“Mommmm!” You look at the clock. It is 11pm. now. You wait. The wailing returns. You sigh. Here you go again. It’s going to be a long night.

Or maybe it is later. You are sleeping but you wake when you hear a ruckus. Shouting. You dash out of bed, heart racing, leaving the slippers and robe behind. You run to your son’s room and tear open the door. Another bad dream you wonder or is it a sign of something more serious?

Sleep disorders are among the most common problems parents will face with their children. And, unfortunately, sleep problems are on the rise.

The 2008 edition of the annual poll taken by The National Sleep Foundation, a nonprofit educational organization, to track the sleep habits of Americans revealed that 79 percent of parents/caregivers reported that their children had trouble sleeping “several” nights a week. This is up from 23 percent of parents/caregivers reporting that their child woke at least one night a week and needed help to get back to sleep in the 2004 poll.

On the psychological side, sleep problems can be a symptom of a larger issue such as anxiety or depression. And, the most commonly reported sleep-related problem, insomnia, can have either a biological or psychological root cause.

Maybe you do not even realize your child has a sleep problem. The opposite seems to be true with your child: bouncing off the walls all day and falling asleep in seconds, snoring deep and loud all night long. But, even though this may seem fine, it is not.

“There is an increase in prevalence in sleep apnea in both children and adults,” said Dr. Natvarlal Rajpara, Director of the Carroll County Sleep Disorders Center. He credits the rise in sleep apnea to the ever-quickening pace of society and the rise in obesity.

“We are becoming a sleep deprived society, and sleep deprivation causes weight gain and obesity, which is also on the rise in both children and adults. Obesity is a major factor in apnea, which leads to further weight gain…it’s a bad cycle,” said Dr. Rajpara.

According to kidshealth.org, “The percentage of overweight children in the U.S. is growing at an alarming rate -1 in 3 kids is now considered overweight or obese.” 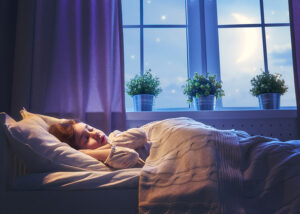 Dr. Rajpara suggests, “If your child is snoring at night, not paying attention during the day, or not doing well at school, you may want to consider testing.”

Testing for snoring and sleep apnea involves an overnight sleep study at the sleep center. To make the testing more child-friendly, a parent is allowed to sleep over and kids can bring favorite books, pillows, and stuffed animals.

“For sleep apnea, the most effective treatment is CPAP (Continuous Positive Airway Pressure), a mask worn over the face while sleeping,” said Dr. Rajpara.

Weight loss, tonsillectomies and adenoidectomies for enlarged tonsils and adenoids, and oral appliances for facial and jaw issues, such as teeth grinding, can also improve sleep.

“We don’t tell people that we have a fast cure,” said Dr. Rajpara, “it’s long-term treatment.”

David Raznick, Ph.D., licensed psychologist and Founder/Director of Carroll Counseling Center has a similar view. “Treatment for sleep problems starts at home,” he said, “with good sleep hygiene. Parents may bring children and teens in for help with a school-related issue, or anxiety or depression, and in our work we often discover a sleep problem.”

Parents are busier now than ever before and are relying on technology to occupy kids while they work and do household chores.

“The downside,” said Dr. Raznick, “is that if kids don’t take the time to process their day, to talk about what’s happening, the stress may build up and reemerge during sleep as insomnia.”

According to a survey by the National Sleep Foundation, only one-fifth of teenagers get the recommended nine hours of sleep each night. Sleep deprivation can directly affect cognitive skills and academic achievement. Continued lack of sleep has been linked to serious health problems such as diabetes, obesity, heart disease and depression. Sleep deprived teenage drivers pose a major safety risk to others and themselves – more than half of the 100,000 U.S. car accidents caused each year by sleepy drivers involve teens at the wheel.

“Technology has invaded our households and especially the bedrooms of many young people,” Dr. Raznick said, “and that’s becoming a very serious concern. Among teens, one of the biggest culprits is the cell phone.” Kids may be silently texting long after lights out and often parents are not even aware.

When children are staying awake on phones or watching television they are losing that time that they should be sleeping. And, these kinds of activities stimulate the brain, which is counterproductive to sleep. The brain needs 1 to 1 1/2 hours to prepare for sleep. Revved up on dramatic action from watching television, the brain will need much longer to settle down and the quality of sleep will not be as good. Agree to no television an hour before sleep, collect the cell phones at a specific time and discuss the consequences that will follow if the child is found using their electronic device after bedtime

Mary Sheedy Kurcinka, author of “Sleepless in America,” says parents should play a key role by “making sleep a priority” for their children. Kurcinka says children are over stimulated starting at an early age with videos and television, overly structured days with extracurricular activities and overly achievement oriented for sports and academics. She recommends parents should “create an environment that values sleep and is conducive to it.” Parents need to protect their children’s sleep.

Also, unhealthy foods and caffeinated drinks often go hand in hand with too much technology. According to the 2008 sleep study, more than one-fourth of children ages 3-10 drink at least one caffeinated beverage a day. As a result, they sleep less than children who do not drink such beverages. They go to bed later and get fewer hours of sleep than what experts say is critical to growth and development and optimum school performance. 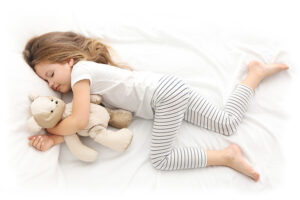 “Sleep is necessary to renew our bodies physically and our brains cognitively,” said Dr. Raznick; “Sleep is a very profound health issue.”

How much sleep do kids need?

Kidshealth.org gives the following guidelines: preschoolers need 10-12 hours a night, kids ages 6-9 need about 10 hours, kids ages 10-12 need 9 hours, and teens need 8-9 1/2 hours. But, these are only generalizations and the amount of sleep each child needs varies.

How do you know if your child is not getting enough sleep? If the child is acting moody or irritable, not performing well at school, sleeping until 2 pm on weekends or presenting symptoms of Attention Deficit Disorder (trouble focusing on a task and/or overly active) he may be overtired.

Other issues, such as nightmares (can occur at any time during sleep, the child wakes scared but can be comforted and may remember the bad dream) and night terrors, an inherited disorder affecting 2 percent of kids 1-8 years old, (usually occurs within four hours of going to sleep, child is not fully awake, can’t be comforted, and won’t remember the episode) are usually, thankfully, short-lived.

“Nightmares, night terrors, sleepwalking, these are probably more disruptive for the parents,” said Dr. Raznick, “and typically children will outgrow them.”

Sleep is an important part of our children’s lives. With good sleep hygiene, parents can help their children have a good night’s sleep every night and the parents will as well.

For more information about sleep issues and disorders, visit the Sleep Disorder Center at Carroll Hospital at www.carrollhospitalcenter.org/sleep-disorders-center

The good news is parents should not have to fight kids to wake up every morning or accept moodiness and irritability as teenage traits. The American Academy of Sleep Medicine recommends the following for a better night’s sleep – for everyone in the family.