The Benefits of the Family Dinner Table 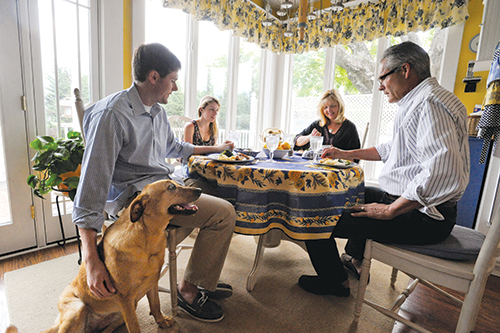 Susan Steinweg, supervisor of the Diabetes Center at Carroll Hospital Center, eats dinner with her son, Collin (left), daughter, Laura, and husband, Craig, in their Owings Mills home along with the family dog, Ellie.

Most evenings, Rai Cary and his wife, Min-li, enjoy having dinner with their 3-year-old daughter, Alex. It’s a tradition that Cary, who lives in Westminster and works as a pharmacist at Finksburg Pharmacy, intends to continue even after they have their second child this spring.

But Cary has heard the stories from friends whose families never seem to dine together at home and whose schedules don’t seem to dovetail.

“They all have working schedules and don’t always manage to eat at the same time,” he said.

“They have crazy lives with a lot of activities. I guess it’s just hard to make it all work.”

Still, Cary feels strongly that his own clan should always break bread together. “It’s just a moment to unplug and catch up,” he said. “That’s particularly important these days, to get away from all of the computers and phones and everything and just be a family.”

For many American families in the past, time seemed to stand still when it was the traditional dinner hour. Everyone stopped and came to the table, ate and shared the particulars of the day. It was a cornerstone of American life.

These days, that notion seems almost quaint. Today, many families have two working parents, endless carpools, afternoon sports and extracurricular activities, plus a reliance on fast food and restaurants. That is not to mention the frenetic, wired times we live in when kids and parents often feel that they have to be constantly staring at screens.

According to the National Center on Addiction and Substance Abuse (CASA) at Columbia University, about 59 percent of surveyed families report they eat dinner together at least five times a week. CASA’s recent studies show children who eat at least five times a week with their families are at lower risk of developing poor eating habits, weight problems, or substance dependencies. They also usually perform better academically.

A team of researchers at the University of Minnesota’s School of Public Health found that even if family members are not particularly close, having a meal together reduces the risk for troubling behaviors among youth. Also, an Emory University study found children who know a lot about their family history, largely through meals, maintain a closer relationship with relatives and have higher self-esteem.

In her book, The Surprising Power of Family Meals, Miriam Weinstein calls the dinners a “magic bullet” for good nutrition, physical and psychological well-being, and individual and familial happiness, as well as an antidote to the national epidemic of obesity.

“Family supper is important because it … provides anchoring for everyone’s day,” Weinstein writes. “It emphasizes the importance of the family nonverbally.”

Susan Steinweg, R.N., a mother of three, is coordinator of the Diabetes Center at Carroll Hospital Center.

“From a nutritional perspective, our society is in a hurry,” she said. “Fast food is OK once in a while, but if eaten frequently it causes obesity and diabetes. It’s better for our digestive systems if we take the time to sit down together and eat and make healthy choices.”

Family meals, according to Steinweg, encourage good eating habits. “It’s just a good time to sit down and commune as a family and enjoy the food. You’re just less likely to rush through a meal. A lot of people inhale their food and then don’t even remember what they ate.”

Steinweg said planning a family meal only takes a little foresight, even for working parents. “Just take a Sunday afternoon to plan and be ready for the rest of the week,” she said.

Steinweg said she always makes a conscious choice not to overextend her children – or herself – with a slew of activities that encroach upon the dinner hour.

“I decided that the family dinner is more important than all the other activities,” she said. “Unfortunately in our society, the priorities have shifted to demands at work and kids being overloaded with activities and sports.”

The beauty of the family dinner, Steinweg said, is that “everything stops. We just enjoy a nutritious dinner and talk and de-stress. It’s family time.”

For families constantly on the go, Steinweg recommends having meals together once or twice a week. Tamara Swam, assistant supervisor of food services for Carroll County Public Schools and a registered dietician. agrees. “It’s hard to sit down and eat together,” said Swam, “If you can’t do it every night, try a couple of times a week. If not dinner, it could be a family breakfast.”

“Most parents have their children’s best interests at heart, but they’re so busy in their lives, they lose sight of what’s important,” Steinweg said. “Good eating habits and conversation can be learned and carried on for the rest of life.”