The Heart of Volunteering 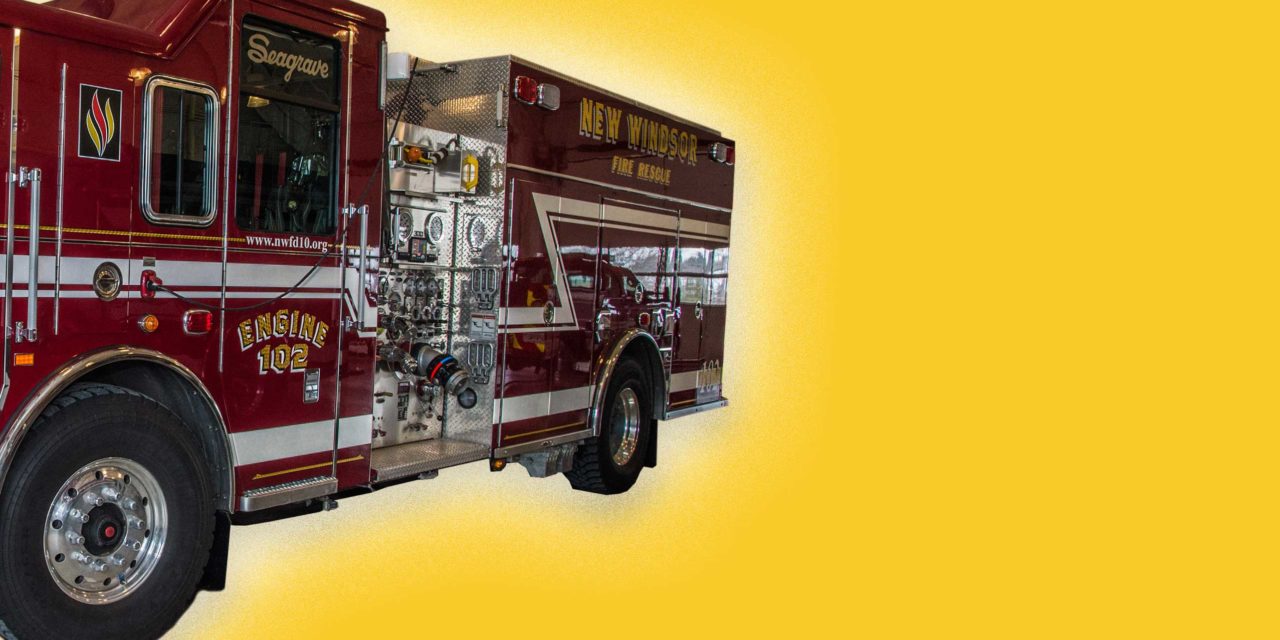 When Bob Cumberland became a volunteer fire fighter at the Westminster Fire Department 48 years ago, he was hanging off the back of the truck within days of joining. The fire company was a social center in the community, all of the calls were fire related and all of the firefighters were volunteers.

Cumberland, who is still a volunteer as well as the Public Information Officer at the Westminster Fire Department, said that becoming a fire fighter, and managing a fire company, has changed drastically in the last half a century. As demand for emergency services continues to increase, and costs associated with providing services continues to rise, Carroll County leadership is working to find efficient ways to provide top notch services to its residents.

Mount Airy 48-year veteran firefighter Doug Alexander finds that it gets more difficult each year to find members to get the apparatus on the street.

Volunteers at the Heart of it All

Counties surrounding Carroll – Anne Arundel, Baltimore, Howard and Frederick – all rely primarily on paid firefighters and emergency services personnel. Some of them, like Frederick County, have a centralized system that provides a management structure for all the county’s firefighting/EMS services. County employees in the centralized system include a fire supervisor and a team of administrative folks that support the business of all the firehouses in the county.

Carroll County has 14 independently working fire stations and most of them still rely heavily on volunteers to respond to fire and emergency medical service calls. Thirteen of Carroll’s 14 stations do have some full and part time emergency medical service personnel on staff but with that comes the costs of managing human resources and payroll, providing benefits, and recruiting/hiring.

New Windsor Fire Chief Tom Coe grew up around the fire service. He’s a 4th generation volunteer fire fighter in the New Windsor Fire Department and for as long as he can remember; the fire station was a part of his life. He became an active emergency services responder at 17, and has continued to serve as a volunteer for the past 23 years. He has worked as a paid firefighter in Frederick County for the last 16 years.

Coe said that the idea of becoming a Chief is exciting, but then when you get the position, it comes with a tremendous amount of work, frustration and responsibility. And it’s all done on a volunteer basis, in addition to often working a full time job in the same field in a neighboring county.

“You roll out of bed at night when that alarm goes off and you never know what you’re going to find, but you’re responsible for lives and people’s property and you have to make split second decisions to mitigate those incidents,” Coe said. “It’s a pretty large obligation, for paid or volunteer folks.”

Coe said that with “a steadily increasing need for services and overwhelming challenges in raising funds to provide those services and to recruit people to provide the services, Carroll County’s fire houses are struggling to do their jobs.” 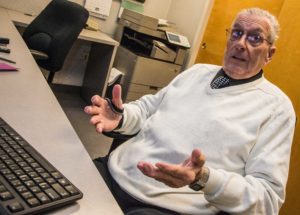 The Challenge of Recruiting

In some communities more than others, firehouses provide a social center in the community. Decades ago many families spent their evenings and weekends volunteering and socializing at the fire hall. It is why even today so many volunteers say one of the perks of being a volunteer is the sense of family that comes with it. Junior firefighter programs provided a community-oriented activity for youths and many kids followed in their parent’s footsteps in become a volunteer at the fire house – whether it was planning events for the Ladies Auxiliary or riding a fire truck.

But according to Doug Alexander, who has been a volunteer with the Mount Airy Fire Department for 48 years and worked for 33 years as a paid fire fighter in Montgomery County, today’s family’s just don’t have the time to give to volunteer fire fighting.

“It gets more difficult each year to find members to ‘get the apparatus on the street,’” Alexander said. “With the time constraints on families today, potential volunteers do not have the time for training, responding to calls, maintenance of equipment, building and apparatus, fundraising, physical certification, and recertification of skills. Most households have one parent working two jobs and the other working one job and keeping the children where they need to be. This leaves little time for all the needs of the volunteer fire service.”

The training requirements have increased significantly in recent decades as well, demanding more upfront time from volunteers. When Cumberland and Alexander became volunteer fire fighters fifty some years ago, training time was measured in hours. Today, it takes almost a full year of training to even ride on a fire truck or ambulance.

“We do all our training through the University of Maryland so people have to wait for classes and have to get certified,” said Dennis Brothers, president of the Carroll County Volunteer Emergency Services Association. “It’s a professional job today, it’s almost like going to college.”

Brothers, who became a volunteer fire fighter at the Gamber Fire Department in 1975 and worked as a paid firefighter in Baltimore County for more than 30 years, said that the emergency medical training class alone takes about six months, and there are numerous other classes, certifications and requirements on top of that.

“On the books, Carroll County has more than 1,000 volunteers. You’d probably say you’ve got plenty of folks,” Brothers said. “But most of them have aged and they only do fundraising, which is critical, but the number of people we have that can go on calls is significantly fewer.”

Brothers added that Carroll County fire companies employ more than 250 people and that’s just for EMS personnel at 13 companies (Harney does not provide EMS services and it’s Carroll’s only all-volunteer station).  Two-thirds of Carroll’s paid staff are part-time, which Brothers said is fortunate because it reduces the costs of salary and benefits.

Many of the part timers and volunteers working in Carroll County work full-time as paid fire fighters and medics in other counties. It’s a plus to get their experience and expertise, but can also make working around their schedules more difficult. Brothers said that each year Carroll loses a few dozen of its full time staffers to other jurisdictions who provide better pay and benefits.

Recruiting is an ongoing challenge for Carroll’s fire companies but equally as challenging is securing the funding to operate the fire companies and purchase/maintain equipment. Brothers said firehouses are struggling with both and the county is “knocking on the door of a critical situation.”

Many fire houses are having to dip into their reserve funds to pay for staff, Cumberland said, which is eating away at money reserved for capital expenses – like purchasing new equipment. Some stations, including Westminster, receive some funding from municipalities as well.

Coe said that equipment – with ladder trucks costing upwards of a million dollars and ambulances costing in the range of $350,000 – is funded through bake sales and BINGOs.

And even that is getting more challenging as fewer people in the community are connected to the fire department and there are more community events to compete with. 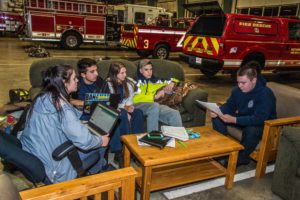 What the Future Holds

Steven Wantz, a Carroll County commissioner and a retired career firefighter in Baltimore County, has been a volunteer with Carroll’s Pleasant Valley Fire Company for 40 years. He understands the issues, and said he believes Carroll can find ways to increase efficiencies system wide and can function with a combination system that relies on both paid and volunteer personnel.

Using the existing infrastructure of 14 stations strategically placed around Carroll County, Wantz said he believes the county will move forward with a volunteer system that infuses paid personnel into the stations. He said he doesn’t want to see the volunteer system go away.

“In many cases, the firehouse is the hub of the community,” Wantz said. “To see that go away or be pushed aside is very troubling to me. I want to make sure we maintain that sense of community.”

Wantz points to a centralized management system in Carroll County as a way to reduce costs and reliance on administrative volunteers. He said he believes the county would see a benefit in creating several county government staff positions to supervise the fire and EMS system and manage the administrative work of human resources, medical billing, training and          for all 14 stations.

Additionally, Wantz said that fire stations could realize increased efficiencies if they all worked together to purchase equipment and gear, and he said he would like to see incentives offered to volunteers that might include college tuition and tax credits.

Brothers and Wantz agree that Carroll County has to evolve its fire and EMS systems, and both recognize that comprehensive changes will take time – years – to implement. Brothers said he will be advocating strongly during the upcoming budget cycle for the county to start down the path to change. 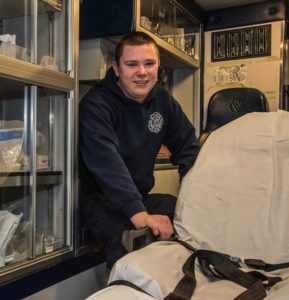 Volunteer Fire Fighters are Not a Thing of the Past

Gunnar Mohlhenrich, 19, said that putting in an application to be a volunteer fire fighter in Westminster two years ago was the best decision of his life. He went through the necessary training and is now a volunteer at Westminster, working full-time as an EMT for a medical transport company, and going to community college to become a paramedic. He said he spends 50-60 hours each week at the fire station, often sleeping there.

“I love being able to help people on the worst day of their life. I like that I learn something new just about every day; I love how thrilling the job is and that there is never a dull moment,” Mohlhenrich said.

The cons? Mohlhenrich mentioned only one and that is how many in the community are completely unaware that most of the people who are running into fires and pulling people from car wrecks and doing water rescues and donning hazmat suites are volunteers who have jobs and families and other things they could be doing.

Mohlhenrich became a volunteer firefighter and eventually an EMT at the urging of a friend who was a volunteer. He proudly said he’s a first-generation firefighter and hopes that the tradition will continue with his future children.

Coe said it’s important for the community to know that the fire stations need more than just folks who want to run into fires. He said fire stations are looking for people with a variety of skill sets and any amount of time to give.

Doug Alexander, like many other volunteers, said he can’t point to one reason why he has spent a lifetime volunteering as a firefighter.

“I like helping folks when they need help the most,” Alexander said. “I also love the challenge of going against the unknown. The feeling you get when you know you saved someone’s home, family, or life is a feeling like no other. It’s very addictive.”