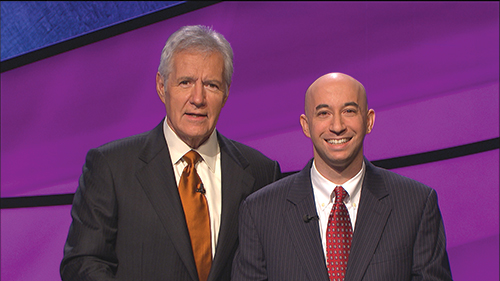 It still stings how I lost on Jeopardy! The only thing that helps is to remind that I also won on Jeopardy! This victory and agony were private for more than seven weeks. Nobody except for two friends in the audience on Oct. 6 in Culver City, Calif. — not even my family — could know I was a champion until Thanksgiving. They then had to wait until Black Friday to learn how I had promptly been knocked off my throne in heartbreaking fashion.

In the grand scheme, I was thrilled just to have the opportunity.

The first step to making it on the show is passing the online test. I was humbled by it way back in 2010 and didn’t have the courage to try again until January 2014. Nearly 200,000 people signed up and 100,000 took it. I did just well enough to be one of about 3,000 invited to auditions held around the country. Mine was in late May in Washington, D.C. We took another test, then were called up in groups of three to play a mini-game, allowing the contestant coordinators to evaluate our stage presence.

I did decently on the second test, but my mini-game had categories I knew little to nothing about. I had fun but figured I’d sit uncalled-on within the contestant pool for the next 18 months. Only 400 of us nationwide would make it on. Several future champions had auditioned multiple times before taking the trip to Trebekistan.

You can imagine my surprise — and celebration — when my phone rang Aug. 27, “Culver City” on the caller ID and a voice on the line saying she worked for Jeopardy!

I’d soon be adding my name to a list of contestants with ties to Carroll County.

This list may not be complete, but my research pulled up several folks who enjoyed varying degrees of success on the show:

Bill Barnett, then of Westminster, was a one-day champion in 1998.

Bryn Upton, a history professor I knew at McDaniel College, was in the lead with a handful of questions left in 2005 before finishing in second place.

And at the same set of auditions as me was Dr. Howard Jacobs, a physician from Pikesville with an office in Westminster.

I attempted to get in touch with them for this article but only one responded to recount his experience.

Jacobs stayed close enough that the game came down to nailing the “Final Jeopardy” question. He got 12 questions right and four wrong during the first two rounds for a total of $6,200. His fellow contestants, Erica and Bill, had $8,400 and $12,000, respectively. “Final Jeopardy” came up. Jacobs knew it immediately. He had bet $6,000 and vaulted into first place at $12,200. Erica got it wrong and dropped down. But Bill, the defending champion, also was correct and retook the lead. Bill ultimately became a three-time winner.

Jacobs, like his son, finished in second. Afterward he and his wife enjoyed some time in California, a trip that with his $2,000 prize essentially amounted to a free vacation and an experience that few get to have.

“It was almost as if there had been something in my life that was left unfulfilled,” Jacobs said. “It felt good to finish that part of my life’s adventure.”

That was as good as I thought I would do.

Of course, I was still going to play to win. I had less than six weeks to prepare.

I played Trivial Pursuit with friends. I downloaded a quiz app on my phone. I subjected myself to pop music to catch up on trends. I limited my radio listening to NPR. And a friend introduced me to Evelyn R., a Torontonian trivia whiz who is also in the Jeopardy! contestant pool. Without ever meeting, Evelyn tutored me nearly every day over the telephone. We went through topics that come up often. We played mock games on an interactive website with clues from past episodes. We discussed betting strategy. And I watched recorded episodes, standing up and clicking a pen as if it were my signaling device.

“Luck is still involved with the categories you get, the other contestants you face and getting in on the buzzer,” Evelyn said. “But based on the skill portion, I thought you had a really good chance. You were very well-prepared.”

I was as nervous as could be. I felt I knew less than the average contestant. The categories and signaling device would be crucial.

I got some practice before the five-episode taping began, unable to buzz in at first but soon going on a nice run. I just had to hope the momentum would hold for whenever my game would come. I didn’t know when that would be.

Three games passed, our group of contestants thinning. I counted my blessings that “Opera” and “Sculptors” were categories in those games and likely wouldn’t be in mine. We came back from lunch. My name was called. Each previous episode had crowned a new champion. I hoped to continue that trend.

One practice round later, the lights went on, the music played, my name was announced and Alex Trebek walked on stage.

Cabinet departments aside, five of the first six categories had nothing to do with what I studied. It was up to intuition and the random facts I’d accumulated over the years.

The defending champion, Aggie, got the first question. I followed with five of the next six, clicking just right on the buzzer. Michelle battled back and was in the lead at the first commercial break. I soon had another run of five answers before getting one wrong. As the opening round ended, I was somehow in the lead, answering 13 correctly for $6,000. Michelle had eight right and $4,400. Aggie had five right and $3,400. They had beaten me on the buzzer for seven answers I knew. Luck and skill were going my way.

That was about to change.

I still held the lead 10 questions into the second round, only to get two wrong in a row and drop into last place. Aggie and Michelle did well. Though I finished with the most correct answers overall, I needed a miracle in “Final Jeopardy.” I had $7,600. Michelle had $11,000. Aggie had $12,600.

The category? “Bodies of Water.” We made our bets. I did some strategic math and wagered $4,000.

I’d studied this subject. The logical answer was one we’d seen in mock games time and again. “What is the Bering Strait?” I wrote, thinking of the area between Russia and Alaska.

Trebek came to me first. I was right, and you could see the relief on my face. I moved into second place with $11,600. Michelle wrote: “What is the Caspian Sea?” and lost $4,000. I was guaranteed second place and waiting to see if my Hail Mary pass would be completed. Aggie didn’t have a complete answer. “What is the river?” she wrote. Her wager was $9,401, her final total $3,401.

I changed suits, had more makeup put on my bald head, was called “champ” by members of the crew and raced back onstage, this time to a different lectern.

My challengers were Ann and Sam, who promptly proved themselves highly intelligent and laser-quick. I only went seven of eight in the opening round, beaten on the buzzer another 10 times. It was still close. I had $4,000. Ann had $4,800. Sam had $5,000.

I got a “Daily Double” wrong in the next round, losing $1,000 but tried to battle back, getting another six correct. Then came a tough turn of events. First was an overturned answer that cost me money. Next was a minimum $5 Daily Double bet in a category I felt extremely weak on — only for me to nail the question. I went into “Final Jeopardy” with $8,605. Sam had $9,000. Ann had $12,000.

The category was “Arlington National Cemetery,” which I felt could’ve gone in several directions. I wagered $2,500, hoping the others would get it wrong.

The question: “The remains for Arlington’s first monument to unknown soldiers mostly came from this battlefield 30 miles away.”

I wrote down “Manassas,” crossed it out and substituted “Bull Run.” Both were right. I was in second place with $11,105.

Ann was smiling. She had “Bull Run” and a guaranteed victory. Her bid was a surprisingly low $1,999. I could’ve won had I not followed betting strategy.

“I hope David isn’t kicking himself for wagering properly!” wrote Keith Williams on his blog “The Final Wager,” where his math showed I should’ve bet between $791 and $2,604.

I was. I still am.  It still stings how I lost. But it helps that all of my friends and family still refer to me as a Jeopardy! champion.

And now I want my new friend Evelyn to get the call so I can help her achieve the same.