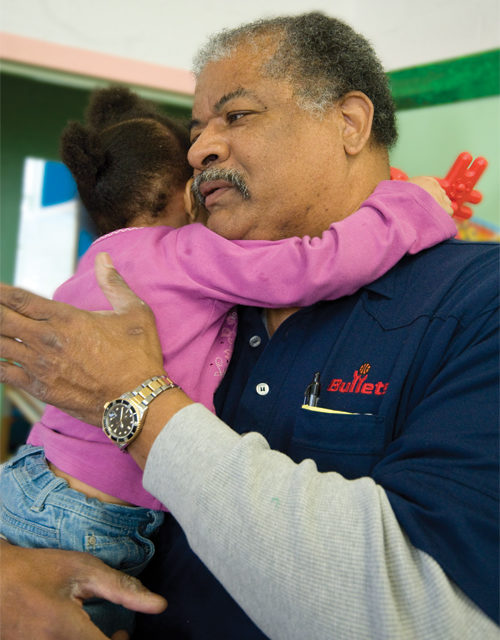 Former NBA star Wes Unseld often greets students with a hug at the entrance to his family’s school in Baltimore.

As a young teacher some 32 years ago, Connie Unseld drew from her parents’ love, the education skills she learned at Louisville University, and the relaxed pace of her Kentucky upbringing, to launch her career at a Baltimore City School.

But she felt that large class sizes and administrative minutiae were stifling her.

“I thought about my own children, all children,” Connie said. “They shouldn’t be rushed. They should have time for art, music, and pets. And they should all get along and be able to hug. I grew up with nothing but love, and I wanted that nurturing, loving nature to shine.”

Connie told her husband, former NBA star Wes Unseld, and her parents, Reverend Herschel Martin and Carrie E. Martin, that she just did not feel comfortable with education in Baltimore schools.

And they told her just what she needed to hear: “Follow your own dream; open your own school, and we will help.”

Vowing to change the educational system, Connie and Wes Unseld bought a nondescript building on South Hilton Street in Baltimore and opened The Unselds’ School. Their son, Wes Unseld, Jr., was the school’s first student.

Although the school building fits well with the local row houses, the Top Shelf Lounge and the used car lot nearby, nothing about the Unselds’ frill-free private school matches mainstream education.

Wes Unseld, the 6 foot 7, 245-pound center who took the Baltimore Bullets franchise to four NBA finals and won the championship in 1978 over the Seattle Super Sonics, now takes students who are not taller than his knees to the kitchen to make sandwiches if they have forgotten to bring lunch from home.

The Unselds’ daughter, Kimberley (Kim) , teaches social studies, science and myriad other practical lessons that are not in textbooks.

When Connie’s parents were alive, their hearts and talents were part of the school, too. Her father, who died in July, 2010, served as the school’s principal and taught math until he was well into his 90s. Today the school’s library bears her mother’s name, and the gym, designed by Wes, bears her father’s.

Everything about The Unselds’ School is family business, and anyone who walks in the door to help is considered family.

Wes, at 65, is a self-appointed doorkeeper. He greets all 110 students as they enter the building every morning, and if the young ones look a little grumpy, lifts them high in the air for a huge hug. Wes also hugs them or taps the students on the shoulder as they leave; his gentle way of letting them know that he and his family will be there when they come back.

Today, The Unselds’ School is the only accredited school in the nation that takes students from infancy through eighth grade.

“Having children is great, but you can’t go to Page 2, Chapter 9, Line 4 and learn how to raise children or teach them,” Connie said. “Research shows that most of the learning process happens before children are six. Wes and I needed a village, and I knew other families did too,” Connie said.

The school also graduates students who are accepted by such high schools as Mt. St. Joseph, Calvert Hall, Western, Baltimore City College l, Bryn Mawr and Maryvale Preparatory School.With the Unselds’ School as a foundation, youths have grown up to be bankers, doctors, nurses, educators, ministers, lawyers, coaches and good parents. The school’s first student, Wes Unseld, Jr., graduated from Johns Hopkins University in 1997, and began his career with the Washington Wizards, where he is now an assistant coach.

“The beauty of the Unselds’ School is that there are high expectations; expectations way beyond “tuck in your shirt, no back talk and no yelling,” said Janet Medina, associate professor of Education at McDaniel College, a close friend of the Unseld family. Medina and her colleagues take McDaniel students to the Unseld school each January as part of a “Teaching and Learning in a Diverse Society” course. “I tell my students, you will be told Ôdon’t touch your students,’ but not here. At the Unselds’ School, everyone is hugged.”

Although classes are out by 2:45 p.m. each day, most students participate in after-school programs, including keyboarding, ballroom dancing, etiquette and chess. They also play basketball, board games or enjoy arts and crafts.

“Sometimes the parents have to wait for the children when they come to pick them up,” said Brinda Turner, a receptionist at the school. “They sometimes sit for 15 to 39 minutes because the students don’t want to leave.”

Heaven forbid that a parent drops off or picks up a student while talking on a cell phone.

“Wes was so funny if parents weren’t paying attention,” said Tyler Buisch, a musician and a former student of Medina’s who frequently returned to the school to volunteer. “He would take that cell phone from them or tell them they need to get off the phone right in the middle of a call and care for their kid.”

The Unselds are sometimes at the school until 9 or 10 p.m.; they have been known to come back at 7 a.m.

The few moments that the family is not at the school, they find solace at their home in Westminster, a place that Wes describes as “good and peaceful.”

Wes loves to tend to his garden and Kim spends time with her horse, Thor.

“I was raised in a rural area and hated it at the time,” said Wes. “But as we get older, we tend to revert to familiar ways. I wanted my garden and I sure have one now: potatoes, celery, carrots, tomatoes, squash, beets, okra.”

But resting in Carroll County is rare for the Unselds.

“They seem to use almost all 24 hours of the day,” said receptionist Turner.

All that time together solidifies the school’s family feel, said Connie. And after spending so much time together, everyone gets to see each other’s weakest and strongest moments.

One of the Unseld’s toughest moments – a nightmare in fact – unfolded at the school last year. While Kim was reading to her class, she started to lose her sight. The loss was permanent.

“Without warning, a sheet of red came down over one eye and my life has changed ever since,” Kim said. “It all happened so fast. It has been a tough hurdle, one that I didn’t expect to be part of my life’s equation.”

The sheet of red was actually blood vessels bursting in her eye: a result of diabetic retinopathy, which is retinal damage that occurs with long-term diabetes. Kim has no vision in her right eye. Retinal detachment in her left eye is causing it, too, to fail.

But as Kim’s sight fades, her family – the whole school family – sees for her:

“Hi, Miss Kim, it’s Jimmy. I’m going to get out the science books.”

“Hi, Miss Kim, we put out some lunch choices here: salads or a sub. And, yes, there are pickles. We know pickles are your favorite.”

The students tell her almost their every move.

“I know them by smell,” said Kim. “I know their cologne, their hair oil, their breath. I know them.”

Kim also knows the placement of desks and resources throughout the school, so she continues to teach all day, rarely missing a beat.

Field trips? She goes on all of those, too.

If she ever stumbles, her humor lifts her right back up.

“Throughout college you hear from teachers about classroom management and read about it in books, but I learned more about classroom management watching Kim teach than in any book or seminar,” said Buisch. “She is awesome. She commands the attention of the students. When they act out, she immediately addresses the misbehavior. The students very rarely act out in class because they know what is waiting for them if they do.”

On the incentive side, Kim created a reward system for the students that teaches them not only fiscal responsibility, but how to help her when she finds tasks harder, if not impossible, to do.

Students are assigned jobs, such as taking care of the school’s rabbit, sanitizing the desks between classes and ensuring a smooth transition between activities. Each task done well earns a poker chip, or a “KOME,” which stands for Kim’s Opportunity for Motivation and Education. The KOMEs translate to cash or gift cards. Many of the students save them up for prom tickets.

The Unselds see successes every day, beyond the classroom and students’ acceptances to good high schools and colleges.

They see them when an Unseld School graduate who is now a nurse comforts them during a time of need, and when a banker, another Unseld alum, negotiates for them and tells Connie she was like a mom to him.

“Every year I have a tugging on my heart when the students leave,” Connie Unseld said. “But I don’t lose them.”

Connie Unseld will be part of a town hall discussion about Schools for Education Evolution on April 5, at the Carroll Arts Center in Westminster.

McDaniel College and the Carroll Arts Center will co-host the town hall discussion, which includes a free screening of the critically acclaimed documentary “Waiting for ÔSuperman.’” The event is free and open to the public.

A reception will begin at 6 p.m. The film, which explores the shortcomings of the American public educational system by following several students clamoring for opportunities in better schools, will begin at 7 p.m., McDaniel President Roger N. Casey will introduce it.

Audience members will have the opportunity to engage in a discussion after the film with noted local and national education leaders, including Unseld, Eric Adler, founder and chief executive officer of the SEED Foundation Inc., an organization devoted to bringing outstanding educational opportunities to underserved communities; Stephen Guthrie, superintendent of Carroll County Public Schools; and Roxanna Harlow, executive director of Higher Learning Inc., a nonprofit educational program based in Westminster for children with little access to the social, cultural and economic resources critical to academic and life success. Harlow is a former associate professor of Sociology at McDaniel College. Unseld is a member of McDaniel College’s Board of Trustees.