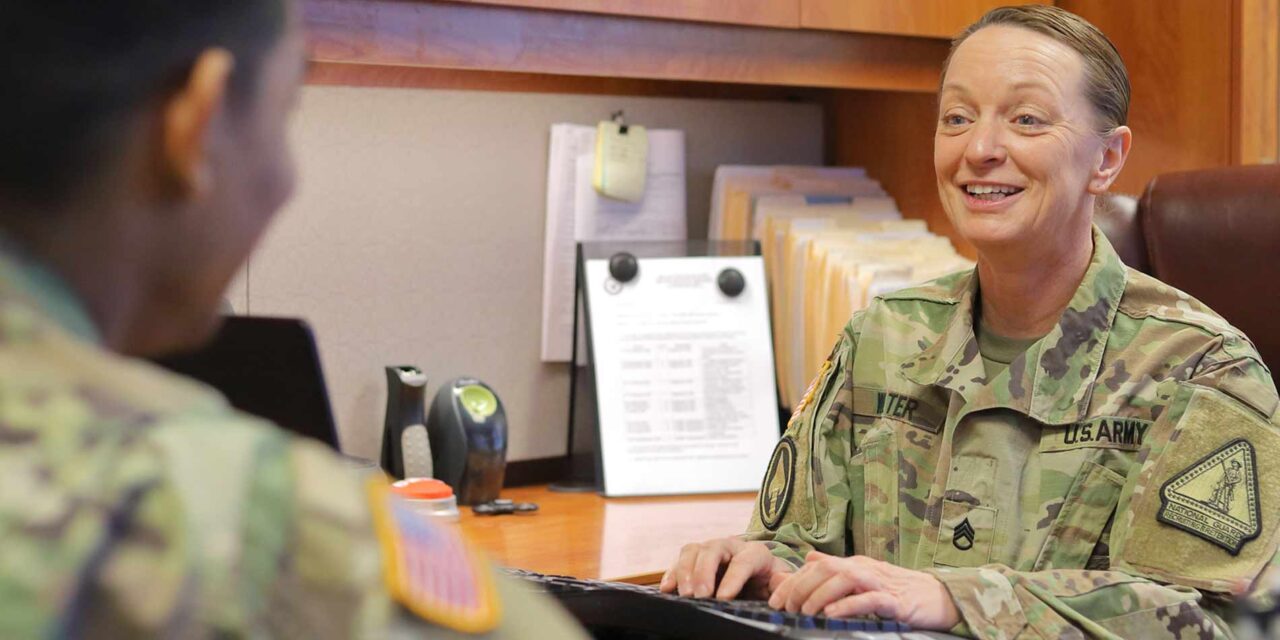 Rachel Walter loves a good challenge. She said she does a lot of things just to prove to herself that she can. A Westminster High School graduate, Walter has run more than 40 marathons, shipped to Army basic training at 40 years old and served in a combat zone. She now serves as a recruiter for the Army National Guard in Carroll County. While she wants to be an inspiration to her daughter and granddaughter, and enjoys the “second family” that comes with military service, Walter said serving in the Army National Guard gives her an unparalleled sense of purpose.

Can you talk about your roots in Westminster and what you thought you wanted to be when you grew up?  I spent most of my life in Westminster. I graduated from Westminster High School in 1987, and I’m three courses shy of an associate’s degree in exercise science from Carroll Community College. I’m quite sure I have the world record for taking forever to complete my associate’s degree, but I’m getting there. My focus in high school was fitness. I ran for both the track and field and cross country teams, while also playing softball for the Jaycees. Like most high school students, I changed my mind a few times before I finally figured out what I wanted to do when I grew up. At one point, I remember wanting to be a Maryland state trooper.

I now own a home in Westminster and I have an amazing daughter and a spunky little granddaughter, who I refer to as my “mini” because she is much like me.

How did you get into the National Guard? I enlisted into the Maryland Army National Guard at 39 years old in August of 2008. The Army had temporarily raised the age limit and I met all other qualifications. I shipped to basic training a few months later, two days after turning 40. My reasons for joining: I was in business for myself as a graphic designer, and saw the opportunity, first and foremost, to simultaneously serve my country part time; secondly, I recognized the value in having access to benefits and incentives that would make working for myself much easier, such as health insurance, life insurance, bonuses, money for college, military discounts and of course, all the training would provide me with additional skill sets. Finally, when I found out about the National Guard marathon team, I was sold!

What is your role with the Guard? One of the nice things about the National Guard is the opportunity to acquire many new skills and experiences that apply to the civilian sector as well. I initially enlisted as an MP [military police] and since earned two additional skill sets in supply and logistics as well as recruitment and retention. While the majority of troops in the National Guard are part time, one weekend a month and two weeks a year, some are hired to fill Active Guard Reserve positions. These are full-time active duty positions. I am currently AGR, and working as a recruiter, primarily covering Carroll County, and in support of my original unit, the 29th Military Police Company in Westminster.

I’m also the local coordinator for the National Guard Endurance Team. Formerly known as the All-Guard National Marathon Team, but since changed as we now compete in Spartan Races as well. National Guard soldiers from all 54 states and territories compete for spots on the national team. The state coordinator recruits National Guard soldiers who are qualified to attend time trials for the marathon and/or Spartan team. There’s a limited number of spots on the national team. Soldiers who make the national team are sent to many athletic events all over the country to compete, bring awareness to the communities about the National Guard, and promote physical fitness and esprit de corps. In 2009, I ran with the marathon team as a guest because I was still away at initial training during the official time trials. I’ve been the coordinator for Maryland since 2010 and also a member of the national team. Although, I have missed the last two years due to work requirements and COVID-19, I do plan to attend the time trials this year in May. Wish me luck!

Have you always been a runner? What do you like about running marathons?
I have always been athletic and enjoy most sports. I discovered my talent for long-distance running by middle school, so I focused on that throughout high school. After high school, life happened — I stopped running and picked up a nasty smoking habit for about 20 years. (I know, so gross!) In 2007, my godmother, who I’m very close to, developed cancer, which was directly related to her smoking. At that time, she wasn’t sure if she was going to be able to quit, so in May of 2007, I quit for her. I needed to replace it with something, so I started running again. By September of 2007, I was competing in 5K races and placing in my age group. I was participating in two 5K races each month. This was getting expensive, and I was running out of drawer space to keep all the race T-shirts. Marathons would take more time to train, and produce less T-shirts. I signed up for my first marathon in 2008 and started running with the National Guard Team in 2009. I’ve since run about 40 marathons, completing at least one marathon in 29 states so far. I love to travel and I intend to complete at least one marathon in all 54 states and territories.

How many deployments have you been on and can you describe one or two that stand out to you? I deployed with the 200th Military Police Company, out of Catonsville, in support of Operation Enduring Freedom in Afghanistan from 2013 to 2014. While the thought of deploying into a combat zone was intimidating, I felt confident in my training, to do the job, and stay safe. I was surrounded by amazing troops and friends, from my own community, who had become my second family. If called upon, I would absolutely welcome the opportunity to do it again.

What is the best part of being in the Guard? This is a difficult question, because there’s so much good that comes from it. The best part is different for everyone. My life is amazing right now, and mostly because of everything the National Guard has provided me. Overall though, I think the best part is the honor and privilege to serve my country as a member of the world’s greatest military. I’m honored to serve alongside others from my own community, and to respond to the needs of our own state during crisis situations, gives me an unparalleled sense of purpose.

What is the worst part of being in the Guard? Not the worst part, but a significant challenge, is that the job does occasionally require time away from home.  Deployments, both state and federal, call for great sacrifice from soldiers and their family members. Soldiers sometimes miss birthdays, anniversaries, graduations, and other events. Simply being absent from the home for an extended period of time puts stress on the family members, as they have to continue to manage the house, and possibly children, without their significant other, while at the same time worrying about their loved one’s safety. We are fortunate to have programs in place to assist soldiers, as well as family members, in these situations.

I don’t think people have any idea how much the Guard actually does in this country. Can you offer some insights about the work the Maryland Guard does in a given year? One of the things I like about being a recruiter for the Maryland Army National Guard is being able to educate people about our organization. Most people I come across don’t realize a soldier in the Army National Guard goes through the same training as an active-duty soldier, to include basic combat training, advanced individual training, and special skills training such as Air Assault, Airborne, and Ranger school. We train with our units one weekend a month and two weeks a year, and we are always “on call” to report for state missions. We are often activated for severe weather events, such as blizzards, hurricanes, and floods. In 2015, we were activated to provide additional support to local authorities during the riots in Baltimore. More recently, the COVID-19 pandemic was cause for activation, initially to assist with testing and now vaccinations. The National Guard does this while also deploying overseas in combat zones. Operation Iraqi Freedom and Operation Enduring Freedom are two examples. Some deployments are NATO peacekeeping missions, such as Sinai and Kosovo. We are a unique organization in that we participate in both federal and state missions.

What motivates you? What is the driving force for someone who loves running long distances, chooses to start a new career at 40, took on the challenge of boot camp and eventually deployed to Afghanistan? While most everything I do in my life directly ties to “proving to myself that I can,” which is part of my competitive makeup, there are other things motivating me as well. Most importantly, I want to set an example for my daughter and granddaughter. I want them to know they can do anything they set their minds to if they work hard and live a healthy lifestyle. I’m also motivated by the act of motivating others. I often hear people say they don’t have time, they’re out of shape or they’re too old. By example, I try to show them they can wake up an hour earlier, exercise, eat right, feel younger, live longer and enjoy life!