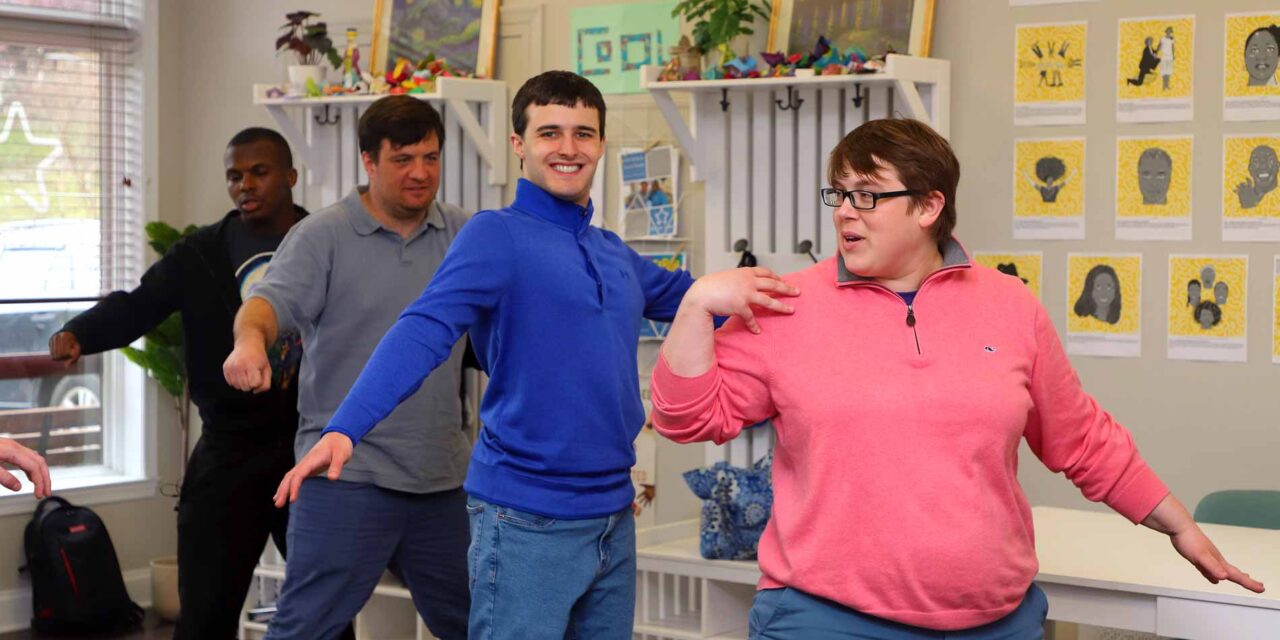 Britt Burr leads an activity at Barrier-Free Maryland. (above)

When Michael Eaton was settling into his new apartment in 2015, he wanted to keep himself busy. Diagnosed as on the autism spectrum with Asperger’s as a child, Eaton knew he needed to find services that would keep him feeling not only occupied, but also fulfilled. 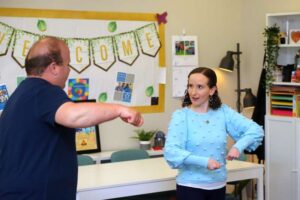 That’s when he found an inclusive theater program run by Britt Burr that brought neurodiverse adults together to create original one-act musicals. At Burr’s suggestion, Eaton invited a few friends and the inclusive theater group in Westminster began.

Burr had worked for several disability organizations in Maryland, and met her wife, Lauren Burr, in the field. Both noticed what they call “common loose threads” in the inner workings of other organizations. This created difficulty in carrying out the organizations’ intended missions. In 2017, they formed Barrier-Free, beginning with two inclusive theater companies where individuals with varying abilities could “come together to create, express and achieve.” The inclusive program is open to adults over age 18 who have a variety of developmental/intellectual disabilities and autism.

“I found theater is one of my large passions, and I love working with folks with disabilities, so [I thought] that maybe we can marry these two things together,” says Britt, who serves as the organization’s creative director. “Barrier-free is just [as] it sounds — eliminating those barriers that are seen in traditional theater, so it makes it more inclusive and available for neurodiverse populations.” 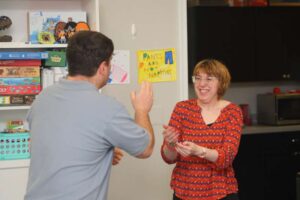 The two theater groups are organized based on the social needs and independence levels of the participants. One company serves individuals with intellectual and developmental disabilities, and the other serves those with autism. Six months of rehearsals culminate in a performance for the community at McDaniel College, as part of a partnership. Britt teaches in McDaniel’s theater department, and Barrier-Free provides internship opportunities for various majors.

The theater groups begin work with improvisational games, which develop into themes that transform into original works. Over several months, a show is created and fully scripted with costumes and props collected. This spring, after both groups played off of an island theme, the works progressed to become “S’mores Wars” and “One Star Resort.” Due to weather issues, a smaller audience of 700 saw the show in March, fewer than the 1,000-plus tickets sold.

Britt says a core group returns to the theater program year after year, with about a 96 percent retention rate. They appreciate and enjoy the opportunity to be part of a theater program without deterrence based on their disabilities. 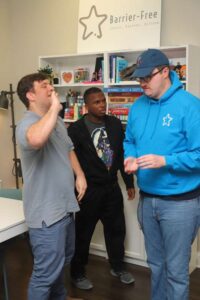 “We want to live in a world where it’s more inclusive; more inclusive programming models are seen in all aspects of society,” notes Britt, who is enrolled in the American College of Education’s doctorate program in community and educational leadership.

“This helps our individuals feel valued and respected as contributing members of society. We see great potential in our community.”

In 2019, the organization incorporated as a 501(c)(3) nonprofit, expanding its programming, fostering new community partnerships, adding more staff, and formalizing its mission to provide inclusive art, self-advocacy and social programming for adults with disabilities in the community.

Lauren, who serves as executive director, envisioned expansion based upon the success of the theater companies, and the pandemic played a role in seeing that come to fruition. At that time, when theater participants could not meet in person, Barrier-Free held classes on Zoom, and they filled to capacity quickly. There’s also a monthly Social Club that meets for events throughout the community. In April, the group enjoyed a sensory-friendly movie night screening of West Side Story, and in July, the club will travel to Toby’s Dinner Theater in Columbia for The Spongebob Musical.

Barrier-Free added its Life Skills and Social Studio in downtown Sykesville in June 2021, expanding its offerings to daily programming for neurodiverse adults to enhance life skills, improve social skills, and make friends in a fun and inclusive setting. Three- and six-hour sessions incorporate segments involving social practice/integration, expressive arts and life skills practice with topic areas like cooking, bill paying and finance, friendship building, literature and film, professional writing and storytelling, among others. Some participants attend on specific days while others attend throughout the week. 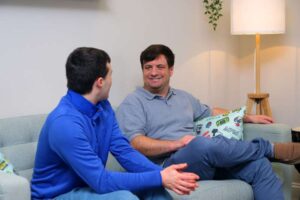 Michael Eaton, right, sits with Jared Parrish during one of the activity sessions.

“We found that was sort of the need that people were looking for,” Britt says. “The studio serves the purpose of people that have one foot in each world — the neurotypical world and a neurodiverse world — and trying to look for some support to bridge the gap between the two. [It’s] navigating the neurotypical world, but also being very proud of neurodiversity, and their neurodivergence. That is, that’s kind of the niche of the studio.”

Needs-based individual skills coaching services are also offered in academics, independent living, job coaching, dating and other areas. Michelle Parrish registered her 22-year-old son, Jared, for six sessions with Lauren to work on communication skills related to driving. Lauren coordinated improv lessons while sitting in the car — including how to pull out his license and registration card and communicate with a police officer during a traffic stop.

“Rather than just my husband and I talking to Jared about what happens in a fender-bender, or what happens in a traffic stop, it was actually a concrete way for him to think about and work through those situations multiple times and under different circumstances,” Parrish says. 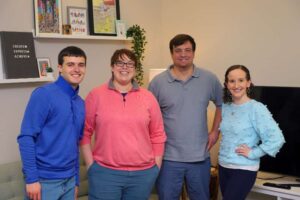 Most Barrier-Free participants pay out-of-pocket, but there are funding options available. Some participants have Barrier-Free written in their self-direct plans, others pay through Low Intensity Support Services (LISS) funding, or the Autism Waiver. Grant funding through Hey Westminster and the Carroll Arts Council also supports the programs. All are invited to try a program for free before committing to a session.

Seven years after his first theater experience, Eaton is still an active participant. But he has a new role: He’s a studio assistant, now leading and mentoring others.

The experience, he says, has helped him learn to speak up for himself — he was bullied as a child — and feel comfortable in groups.

“My job as studio assistant is to make sure that people are integrated into the group and that everyone feels welcome and wants to keep coming back and having fun,” says Eaton, who is now 30. “It’s very much like a family, and I wouldn’t be where I am today [without it].

“I honestly do believe that there’s been a lot of changes in my life for the better, thanks to Barrier-Free.”

Parrish feels similarly about the impact the program has had on her son, who had difficulty finding social opportunities once he transitioned from school.

“He has built wonderful friendships, and he is supported by staff that really understand the neurodiverse community,” she says. “As a young adult, this really just is perfect for him.

“I could see this being a lifelong community for Jared.”