Be Kind Signs Offer a Simple Message with a Powerful Meaning 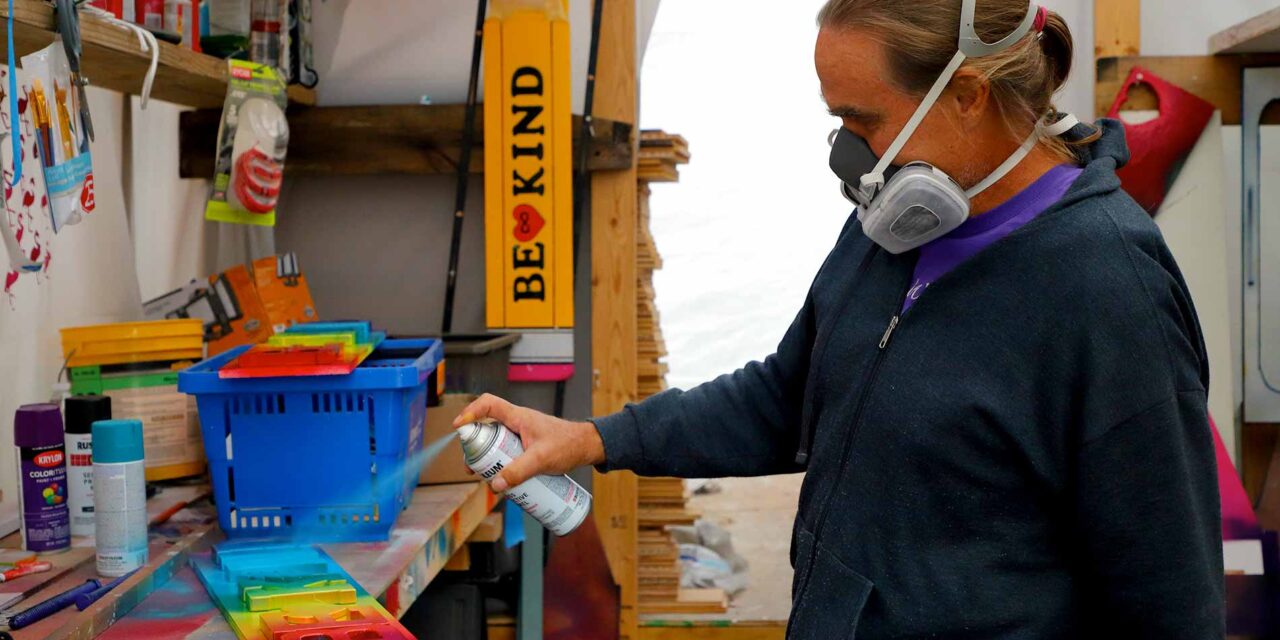 Eric Hyde Miller in his workshop creating Be Kind signs. (above)

Wood has always spoken to Eric Hyde Miller. As a little boy, he would look at the grain of the wood and see all kinds of things. “Elephants, hippos, dinosaurs,” says Miller, who is a woodworker in Westminster.

And as a grown man strolling on the beach, Miller would come across driftwood. And again, not just see the wood itself but the shape of a fish or a turtle. Some of the driftwood pieces he would take home and display. 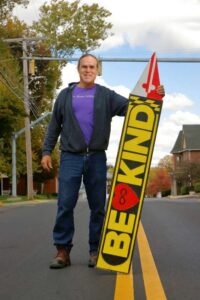 Eric Hyde Miller with one of his Be Kind signs in downtown Westminster.

Now wood is helping to speak for him. And the message is simple but powerful: Be Kind.

Carroll Countians have no doubt seen the wooden Be Kinds signs throughout the area and beyond — posted on telephone or light poles, placed in front yards or the front of houses as well as outside and inside businesses. All the signs are made by Miller. And they have had quite an impact on people.

Just as he hoped they would.

“It’s a gentle reminder in our busy hectic lives to stop, pause and reflect on how our actions and reactions can either make or break someone’s day,” says Diane McCarthy of Eldersburg. “Be kind, have patience and make this world a better place one person at a time.”

During the last few years, Miller had, like so many others, become weary of discouraging headline after discouraging headline — from the pandemic to political divisiveness. Finally, he had had enough one day and took a piece of wood and created his message. Miller placed the first one on a pole at the corner of Bond and Green streets in Westminster. More would follow. And people took notice.

“I saw these signs hanging all around town, and I got so excited,” says Kirstyn Konsen of Westminster. “I felt like finally some good signs around here! No ego. No politics. No terrible news to it. Just a kind message.” And, she added, “I have one at the front door of my apartment.”

Those signs are now part of a kindness industry of sorts created by Miller and his partner, Tina Thomas. Their Infinite Love Project is both a business and a nonprofit. And, Sarah Thomas, Tina’s 22-year-old daughter is also involved as the office manager. Items such as the Be Kind signs, which can also be made to order with say a nod to a favorite sports team among other options, and stickers with the Be Kind message, are sold, as well as tiny wooden red hearts that fit into the palm of one’s hand and are decorated with the infinity symbol. The idea behind the wooden hearts is to randomly hand them out to others as a show of unexpected kindness. There are also T-shirts with the heart and infinity symbol. These items are available on their website infiniteloveproject.com. The couple also frequent farmers’ markets and festivals to sell their goods. 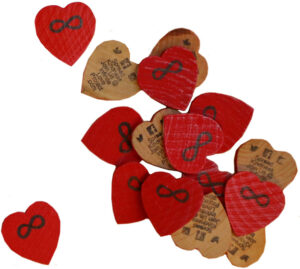 Wooden hearts to give out as a show of unexpected kindness.

Action for Kindness is the nonprofit component of the business.

“We always aspired right from the get-go to figure out how to become a nonprofit so that we could do even more,” says Thomas, who grew up in Taneytown.

One example of doing more is their support of United Methodist Church’s Youth Changing the World Social Justice Camp. “It was the first of its kind that they had done. It was a weeklong summer program,” Thomas said. “And we were able to give a matching grant to them through our nonprofit Action for Kindness so that they could have this camp. Our grant was a component of one afternoon of the entire week. So much more went into it from other community members.”

But Miller and Thomas were eager to do what they could.

As for the signs themselves, according to Miller and Thomas so far 2,400 signs have been installed in the Delaware/Maryland/Virginia area and Be Kind signs have been shipped to 35 states and nine countries. “And we just finished our ‘50 on Route 50’ between Annapolis and Ocean City,” says Miller.

People like Robert McCarthy of Eldersburg enjoy seeing the signs on their travels. “I travel the DMV several times a week and some days I might eye spy 30 or more,” he says. “I get a smile every time I see one.”

While the signs and their message are designed to speak to all, Miller and Thomas are especially enthusiastic that it speaks to the younger generation. “We want this next generation to be the most empathetic ever,” says Miller. 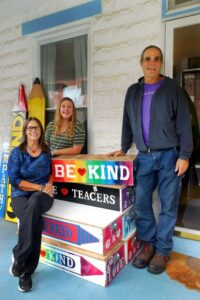 The Be Kind sign team of Eric Hyde Miller, Tina Thomas and Sarah Thomas (back).

In fact, teachers are often drawn to the signs and their message, especially the signs shaped like crayons. Many of these designs Miller created specifically for children. There are also pencil shapes created for older children. “Teachers have by far been our biggest supporters,” says Miller.

Kristen SanGiovanni, a teacher at East Middle School, was one of the very first to purchase Be Kind signs. “I got the box of crayons,” she says of eight crayon-shaped Be Kind signs. She kept one for her classroom and gave away the others, including to fellow teachers.

SanGiovanni also had an oversized Be Kind sign for her yard. “But I live on a flag lot,” she says. “And I felt in my yard no one was going to see it.”

So she had an idea. “I decided to share the sign with someone who would then share it with someone else,” she says. “I gave it to a friend who then gave it to her sister.”

Teachers aren’t the only ones who have embraced the signs. Parents have as well. Melissa Fisher and her husband purchased a Be Kind sign when their son, Miles, began kindergarten. And they plan to do so with each grade. Miles is currently in second grade.

“The hope is that the teacher hangs it on the wall in the classroom and sends the message to every student that ever steps into that classroom,” says Fisher, who along with her family previously lived in Carroll County but now resides in Delaware. “Can you imagine every kid that will see these signs over the years?”

The Infinite Love Project also provides a DIY approach to kindness with art sessions where participants, especially children, can custom-paint their own sign. “It’s a tactile activity where we’re bringing to mind as you’re painting how to think positive thoughts,” says Thomas.

Miller and Thomas have conducted paint sessions with the Carroll Arts Center and the Boys and Girls Club of Westminster, among others.

“We were already preaching the message,” says Erin Bishop, marketing director for the Boys and Girls Club of Westminster. “It was already part of our mission. And then they found a beautiful way to take what we were trying to internalize in our kids and actually put it in a form where our kids could see it and understand it.” 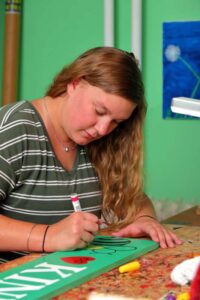 Bishop even took a sign to her daughter when she visited her in Spain, where she is teaching English.

“My daughter told me that she wanted a Be Kind sign,” says Bishop. “She asked me, ‘Do you think they could make me one in Spanish?’ I talked to Eric and Tina, and they designed one in Spanish. And they painted it in the colors of the Spanish flag. The kids loved it.”

Amanda Jozkowski’s children have participated in the paint events as well. Their handiwork is displayed in the family’s home in Eldersburg. “A good reminder when they start squabbling,” says Jozkowski, “to be kind.”

Her children, especially her daughters, who are 4 and 6, also enjoy playing a spot-the-sign game as they are out. “I’ll say, ‘I see a sign. Who can find it first?’” Jozkowskik says. “They get so excited.”

And as for the generation just beginning to step into adulthood, the signs have found a place in their lives as well. As Ali King’s daughter was preparing to go off to college, King purchased a Be Kind sign with a Maryland flag motif for her to take along and display in her dorm room.

“She actually wrote one of her college essays about the Be Kind signs and how those started in her community and what it’s like to see them everywhere she goes,” says King, co-owner of Rudolph Girls Bookstore in Westminster which has its own Be Kind sign on display and offers the Be Kind signs as an option for purchase through its donation program for teachers.

Kim Martin’s son found a place for one in his dorm room as well, although as a result of a dire situation. “He came home on Christmas break from college and was working at a local convenience store and a customer attempted to rob the store and threw a cup of hot water on my son, causing second- and third-degree burns,” says Martin of Hagerstown. “Eric read about the story and gifted a sign to my son, which he hung in his dorm room.”

Miller couldn’t be more delighted. “There are many, many, many empathetic people,” he says. “The others are just louder.”

And now those same empathetic people have a sign and a message of their own. And it is being heard loud and clear.