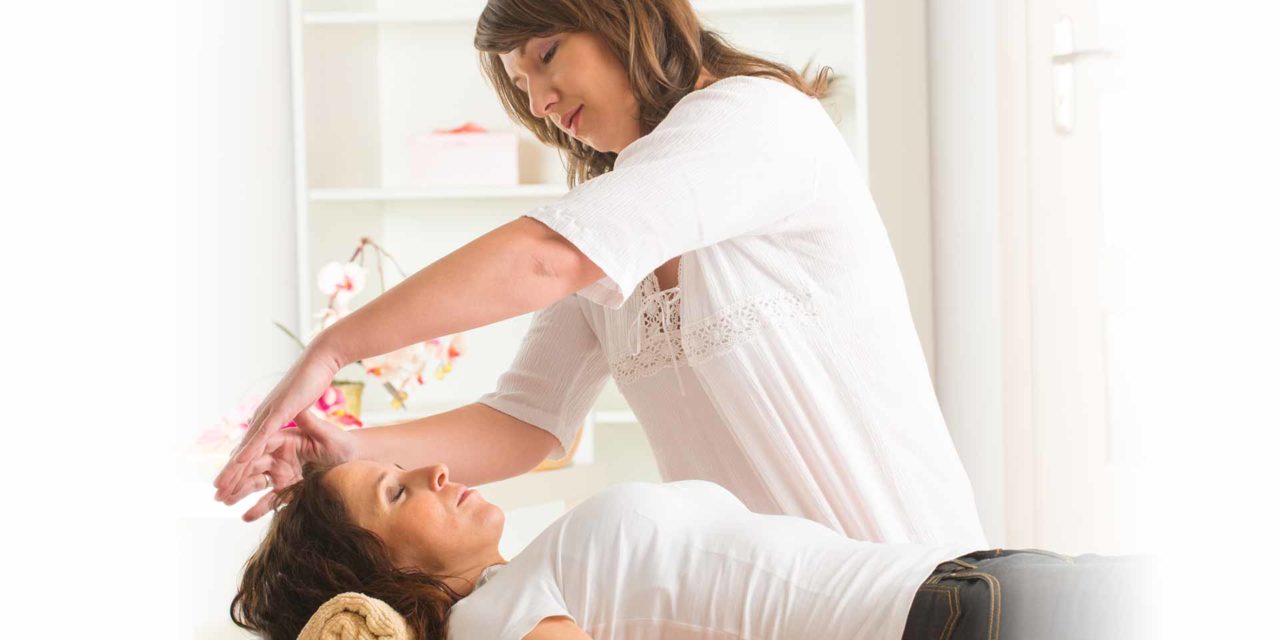 The news from her doctor was not good. Sonia Davis had stage IV breast cancer. And the cancer had spread to her spine, right pelvis, sternum, ribs, adrenal glands and lymph nodes. “I was 46 and had two young children,” she says. “I was given a very bleak prognosis of living five years, give or take.” 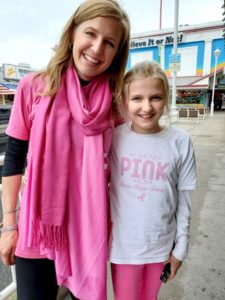 Upon learning of her diagnosis, Davis, who lives in Westminster, immediately set about researching and looking for options — including those outside of traditional medicine. “I have always been into doing things the natural way,” she says. “I was really into homeopathy before all of this.”

She started Letrozole, a type of hormone therapy drug used to treat breast cancer in postmenopausal women. But she chose not to participate in chemotherapy. “I didn’t want to go that route,” she says.

Instead, she decided to begin intravenous infusions of mistletoe extract. The liquid is derived from the poisonous, semiparasitic mistletoe plant and has been used as a natural treatment in Europe for years. And while mistletoe is on the fringes of traditional medicine in the U.S. and not considered standard practice, Johns Hopkins is currently conducting a clinical trial on the plant and its effectiveness in treating cancer.

Besides the mistletoe, Davis made changes in her lifestyle. “I was already a healthy eater, but further addressed my diet and exercise,” she says, as well as “things like prayer, meditation and reiki.” And she takes up to 20 supplements a day.

And when she had a scan this past September, she says the news was good.

“It showed no cancer in my adrenals, lymph, sternum or ribs, and my spine and right pelvis were approximately 40 percent better,” says Davis, who is continuing her regimen. “I’m really, really pleased.”

Davis is among a growing number of Americans who are seeking options outside of traditional medicine, such as alternative, complementary and functional medicine. According to the National Center for Complementary and Integrative Health and the Centers for Disease Control and Prevention, Americans are spending over $30 billion a year on nontraditional medical treatments — with most, if not all, coming out of pocket and not covered by insurance. These practices include yoga, massage and acupuncture.

“I think there’s a real hunger for something and more of a willingness to explore,” says Jim Thomas of Samara Healing and Retreat Center in Taneytown. The center offers services in acupuncture and other areas including sound healing, which is taught by his son Paul and involves using singing and instruments along with a vibroacoustic table to feel the sound.

And according to Thomas, who is a licensed acupuncturist and meditation teacher, there is also a desire to have more involvement with one’s health and healthcare. “The normal health conversation is that the power lies outside of ourselves,” he says. “It’s in the pill. It’s in the surgery. We’re sort of often bystanders in the process.”

Alternative and complementary medicine often goes by the principle of caring for the whole person — mind, body and spirit — with the idea of all three working together to keep an individual healthy and well. In other words, a calmer mind can mean a healthier body. Other commonly used practices include meditation and reiki, which uses touch to activate natural healing processes.

“Practitioners who work in these fields consider the physical body, but they also consider the emotional aspect, the psychological or mental aspect, as well as the spiritual one,” says Vickii Engel, owner and co-founder of the Center for Healing Arts in Westminster, which offers counseling, massage, acupuncture and meditation, among other services. “And that’s what we are as human beings. We are all of those things. And all of those things go into creating our health.”

Engel, a counselor and licensed massage therapist, has seen firsthand this growing popularity in nontraditional medicine. In the early days of the center more than 30 years ago, Engel says many people in the area were wary at first. That changed.

“People were curious but cautious,” Engel says. “Some folks were willing to give it a try and see what the experience was like. They found it helpful. They felt better. So they would refer friends. It was a lot of word of mouth.”

It has been no different for Carroll Hospital’s Tevis Center for Wellness.

“The interest in and use of these treatments has increased dramatically over the 20 years that Carroll Hospital has been offering them,” says Eileen Overfelt, a registered nurse and director of Integrative Health & Navigation Services. The center, which only offers complementary medicine services and not alternative, provides a combined total of over 400 treatments per month, including massage, acupuncture and reiki.

“Providing these treatments adds an additional resource that patients can use to manage and improve health,” says Overfelt. However, she adds, “Patients are strongly encouraged to discuss the use of the treatments with their physician to make sure that are no contraindications or concerns.”

Access to complementary medicine and the Tevis Center for Wellness was one of the reasons that Dona Hobart, a surgeon and medical director of Carroll Hospital’s Center for Breast Health, was drawn to the hospital in the first place. “I think as a provider it’s important to understand what I’ve got in my toolbox aren’t the only tools,” says Hobart.

For example, referring patients for acupuncture, which has proven to be effective in helping relieve symptoms of chemotherapy for cancer patients, including fatigue and nausea. “The data on this is very good,” says Hobart.

She added, “I’m hoping more and more doctors will become open to [complementary medicine]. Traditional medicine training doesn’t really expose you much to these sorts of things. And I think the word complementary is very important so that it complements traditional medical treatment.”

This coming together is nothing new to Lili He, a licensed acupuncturist in Eldersburg. 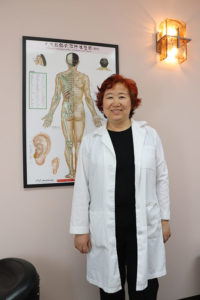 Dr. Lili He is a licensed acupunturist at Carroll Acupuncture in Eldersburg.

“We learned both Chinese and Western medicine parallel to each other,” says He, who was trained as a doctor in her native China and practiced in Beijing for 10 years.

“In China there are three areas — pure Chinese medicine, Western medicine and a lot of in-between,” she says. But “it’s not about Western or Chinese medicine, and which is good or bad. It’s all needed. The more providers understand each other, the better for the patient.”

According to a study by the CDC, many individuals seek nontraditional medicine to help manage chronic diseases such as arthritis and to find relief from their symptoms.

“We have a healthcare crisis right now,” says Paula Shaffer, a licensed acupuncturist and holistic wellness specialist in Hampstead. “Chronic disease is shortening people’s lifespans. It is destroying our quality of life.”

And the stresses of today’s world can have a lot to do with that, she says.

“It definitely comes from our emotions and the stress we deal with every day,” says Shaffer. “That’s where one piece of chronic illness comes from. Most of the time ideally our body is resolving these stress issues as we go. But sometimes they can kind of get stuck and stuck and stuck. And they build upon each other. That in and of itself can make you sick.”

And countless Americans are just that — sick. According to the CDC study, more than 25 percent of American adults report having two or more chronic conditions.

And it is about getting to the root of the problem, she says. “With functional medicine we are looking at the ‘why,’ not the ‘what’ that you are diagnosed with. What we call it is less important than why it is there in the first place,” she says.

And that “why” can include one’s diet. “Processed foods, sugar, lack of nutritional value, carbs,” she says. “We are all getting sick. We all started gaining weight, the result being diseases such as insulin resistance and Type 2 diabetes, which is going off the hook.”

“Just by changing your diet can make such as amazing difference,” she said.

“We are multifaceted, multifactored in our health,” says Engle. “We can approach it from a variety of different perspectives.”

As Davis has done.

Meditation is going mainstream. It is being introduced into schools and encouraged at the workplace. It can be as accessible as your fingertip with apps such as Calm and Headspace. And more Americans than ever before are mediating.

In fact, the number of Americans meditating increased from 4.1 percent in 2012 to 14.2 percent in 2017, according to the Centers for Disease Control and Prevention.

Kathy Helms, who teaches meditation at the Center for the Healing Arts in Westminster, thinks she knows one of the reasons why: the stress of living in an often overwhelming and chaotic world.

Meditation, says Helms, can offer a respite from the stresses of the day and help individuals become calmer and more focused. It can be easily accessible and always at the ready just by sitting quietly and focusing on one’s breathing or a word or a phrase for even just a few minutes a day.

“In setting an intention,” says Helms, “ask yourself, ‘What do I need?’ Maybe your answer is more love or more compassion.”

Then comes the breathing, she says. “Slowly breathe in to a count of four through your nose,” says Helms. “Hold the breath and then breathe out slowly to a count of six.”

Adding, “As you breathe in your intention, say to yourself, ‘I need love.’ Hold that love while you are holding your breath and then breathe that love into the world.”

For the remainder of the five minutes, Helms suggests “fully engaging in the present moment. Listen to every sound without judgment.”

“In today’s society you are connected to your phone or some other technology 24 hours a day,” says Linda Haren, who began taking meditation classes with Helms following a divorce and complications from a back surgery that left her anxious and depressed. “We are denying ourselves the need to be still. We need to recharge. We need to reconnect with ourselves.”

“Meditation is this wonderful teacher of how to just be.”