Bradley Wantz: “On the Cusp of Something Great” 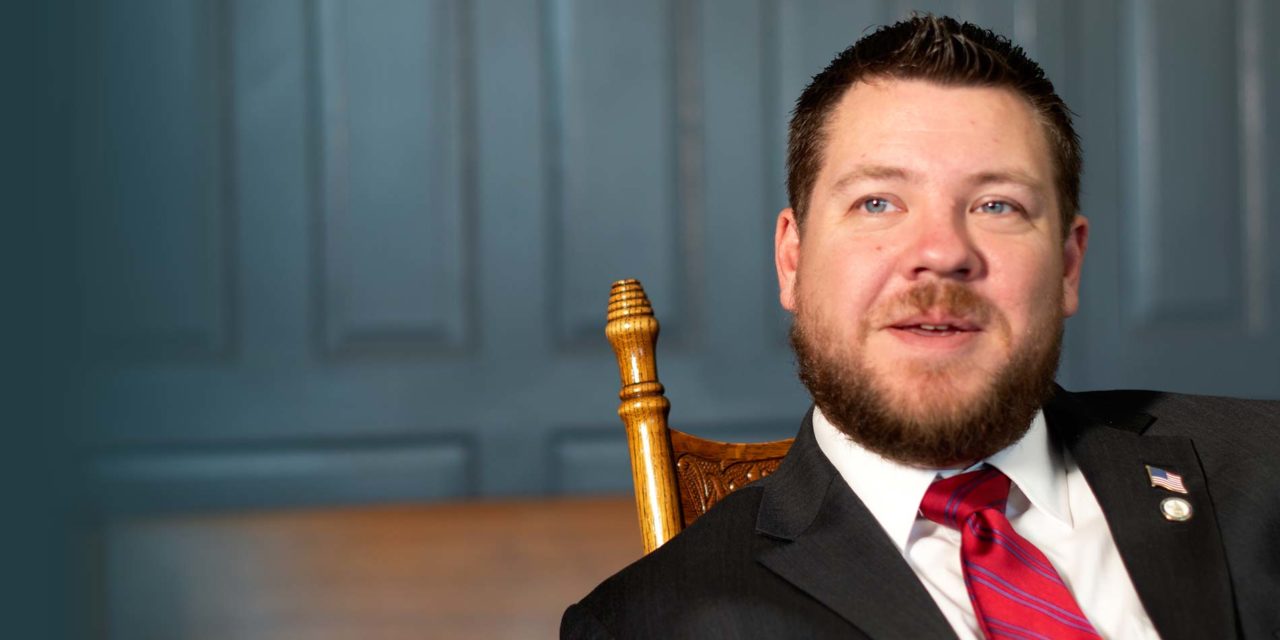 In the spring of last year, 37-year-old Bradley Wantz stepped into the shoes of mayor of Taneytown. The young mayor, who was born and raised in Taneytown and now lives there with his wife and children, served on the City Council for four years prior to being elected mayor. Although he has already made strides in expanding the Police Department and improving parks and recreation programs, he said the job provides endless opportunities to continue learning and growing. He believes the city is on the cup of something great, and his ambition and vision, paired with a dedicated City Council and staff, may be just what the city needs to enter a new decade on a path toward success.

As a relatively young mayor, do you think your age impacts how you do the job?
I was 37 years old when I took office. Overall, the county has a rather youthful group of mayors that welcomed me into the fold. I believe that my age does have an impact on how I approach my job. I have school-aged children of my own, and it definitely brings it home when I remember that the city I lead today will have a direct impact on them. I also try to bring an energy to this position, a combination of vision and a want for community engagement.

Do you believe you are better suited for the job because you grew up in Taneytown?
I was born and raised in Taneytown and went through the Taneytown Elementary to Northwest Middle to FSK High route, graduating in 2000. Having experienced Taneytown as a child (although it was a much different city then), I tend to have a better understanding of what has been missing for the younger demographic. My commitment to a thriving parks and recreation program stems from my childhood in this city and recognizing that we need programs which are accessible to a broader array of residents. We should be able to offer something for all demographics.

What made you want to run for mayor? When did you decide you were going to run?
I have been asked many times what possessed me to run for mayor. I enjoyed the four years that I served on the City Council, and I began receiving encouragement from several residents that I should run for mayor. It was not an easy decision to make and several nights of sleep were lost as I fought with myself on whether I was personally ready to take the leap. I felt that I had been an effective councilmember and I believe that was reinforced by the desire of constituents to see me step forward into this role. While I had flirted with the idea of one day being the mayor of Taneytown for a long time, the final decision came after a long conversation with my amazingly supportive wife in early February 2019. That conversation went from “Let’s do it” to “How do we make it happen?” quickly, and it became an instant whirlwind of activity to assemble the resources and team to campaign for the May 2019 election.

What are some of the challenges you face running a small rural town?
I think almost all municipalities who keep their residents first in their decisions face a lot of the same challenges. Money is a finite resource, and it is often challenging to balance what services are best for the residents without having to hit them in their wallets for more taxes. There are some concepts and projects that get scrapped very quickly because the finances just were not there. In addition, constantly shifting regulations from upper governments add far more complexity and expense to the day-to-day equation. As a city government we want to offer the very best services to our deserving residents within sometimes unreasonable constraints!

Can you share a few things you’ve accomplished since taking office?
The past six months have flown by very quickly at times, and accomplishments just seem to blend into the work. I am excited that civility has returned to the council chambers and we can conduct business in a respectful and productive way. I am very proud of the improvements made within our Police Department by appointing a great chief in Jason Etzler, moving retired police officer Bob Mitchell out of parks and rec to become a major in the department, and hiring three new recruits who are about to enter the police academy. Our department has struggled with low manpower for far too long, and our officers have stuck through this difficult time. Early in my term, I rode along with every single officer and learned more about each one’s background and their thoughts and feelings about this city. The time I spent with these officers I consider to be some of the best spent hours of my term. We are also preparing to have a new parks and rec director with a fresh focus on providing recreation activities for our residents both young and old. Any “lessons learned” during your time as mayor? I think there are far more lessons I have yet to learn than those I have learned already! There are bits and pieces of things that I have noted to myself, mostly relating to how I interact with so many different people regularly. I learned during my term on council that every issue presented to me is a real issue, although not always relevant to me specifically.

Separating my personal feelings from the job is always a goal and is always one of my greatest struggles. Anyone who calls me, or stops by my office, deserves the same amount of time and respect as the person I just finished with. Departmentalizing issues and leaning on my council for their help helps me not carry feelings from one issue and affecting my work on the next. But I will admit that sometimes a single topic manages to take over my time, energy, and feelings. Having a great network of trusted friends, and my family, helps me step back and not get lost in the debris.

What motivates you? What drives you to be an integral part in making Taneytown a great place to live and work?
“Be the change you want to see.” I frequently say, and believe wholeheartedly, that Taneytown is on the cusp of something great. We have experienced tremendous growth and find that more and more people are being attracted to rural municipalities and away from urban areas.

I support growth in Taneytown as long as we do not sacrifice what makes it great to begin with. It’s a small town trapped in the body of a small city. Neighbors still talk to each other here. People still wave to the police as they drive by. There is a beating heart within our city that we must be sure to not snuff out as we seek ways to improve and progress!

What are some things you want to do in your time as mayor? What initiatives are really important to you to help move the town forward?
One change that we are working toward immediately is bringing parades back to Taneytown. City staff is diligently working out the logistics so that our residents can again enjoy the sense of community that comes with these celebrations. I am bringing a renewed vision to our parks that involves making long overdue repairs, and finally bringing recreation to Taneytown. We hope to provide summer activities for all ages and are preparing to realize Bollinger Park by beginning construction in spring 2020.

We have also moved the expansion of Memorial Park into our five-year plan so that we can provide adequate parking and sports fields to the growing sports programs. I have started conversations with other community organizations to bring all of the groups to the table and maximize benefits to the community as a whole.

What are you doing when you’re not wearing the mayor hat?
In addition to the best job in the world as the mayor of Taneytown, I work full-time as the chief operation officer for an aviation company in Westminster. I have an amazing wife and three great children. Connor, 19, is out on his own as a hardworking adult; Kelton, 16, and Lucas, 9, round out my awesome home life.

My hobby interests change frequently, and I often don’t have enough time to work on much of any of them. Generally, we enjoy a peaceful evening watching a movie or visiting Gettysburg on a weekend. When I’m not working on mayoral duties or at work, I simply enjoy being at home right now.

When you were younger, what did you want to be when you grew up?
My ambitions ranged from astronaut to rock star until I reached high school, when my goals drifted toward law enforcement, business and design. I always had a fascination and interest in law and legal studies, and would research crimes and court cases for fun after high school.

It was several years later that I really thought about getting into local government, then I started attending council meetings and taking pages of notes of what was happening and the processes I observed. My life has turned out dramatically different than I would have imagined so many years ago, but right now I wouldn’t trade it for anything!