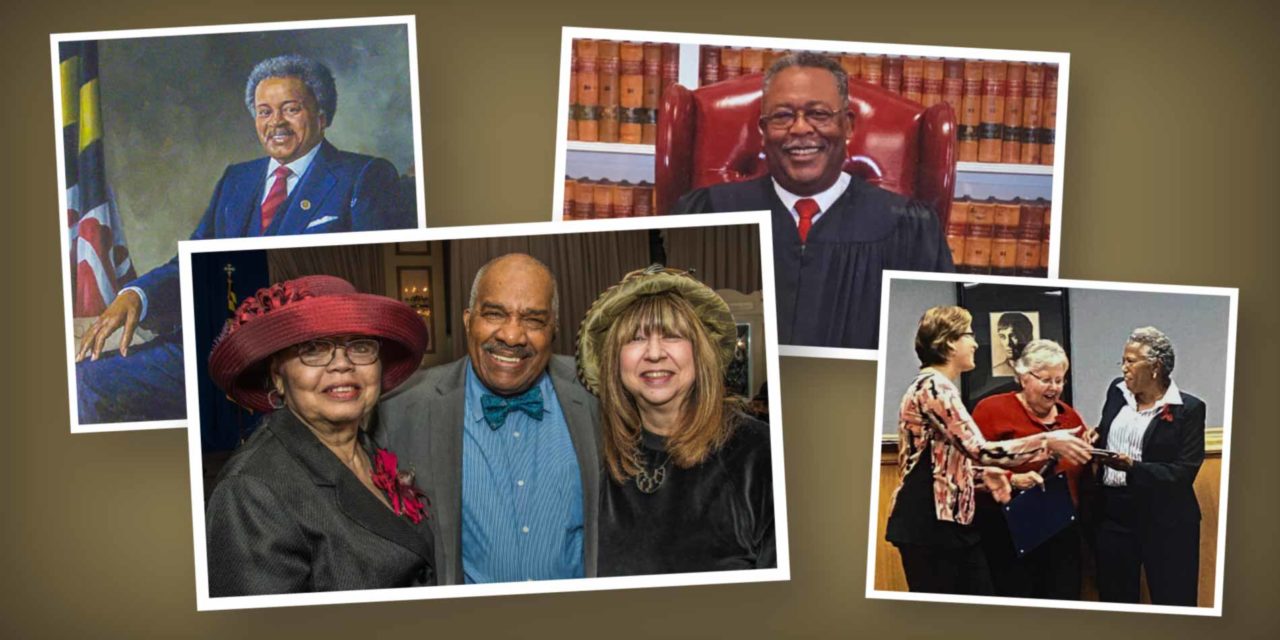 Above – Top left: The late Richard Dixon was the first African American Maryland State Treasurer as well as the first Carroll County School Board president. Top right: Judge Charles Harrison is pictured in his robes sitting on the Orphans Court of Carroll County. Bottom left: Jean and John Lewis are members of the Carroll County NAACP along with activist Pam Zappardino, all of whom have worked to break the color barrier and promote understanding between races. Bottom right: Virginia Harrison is honored upon leaving the Board of Education after nine years.

But when they discussed the impact of black history on Carroll County, the conversation focused on the recent history of the county and their involvement in organizations that have helped the black population to find a voice.

There have been many who have worked to break down barriers in Carroll County — through business, through education, through service. Here are more examples of those who have helped lay the path for future generations here in Carroll County.

Current president of the
Carroll County branch of the NAACP

Credited with establishing the
Carroll County chapter of the NAACP

Private in the U.S. Colored Troops during the Civil War
Commander of Thaddeus Steven Post No. 40, G.A.R.
Charter member of Good Samaritan Lodge No. 39, I.O.O.F

Corporal in the U.S. Colored Troops during the Civil War
Preacher & Trustee for the Western Chapel Church

At that point, the Harrisons made a decision to become more involved in their community. Charles, an FBI special agent working in Baltimore, made time to serve as vice president of their neighborhood’s community association. Virginia had resigned from her files and communication position with the FBI to raise their two daughters, Tia and Tiane, and started a dressmaking business.

“I read in the paper that the Carroll County extension program at the University of Maryland was having a class on dressing for the handicapped,” she said. “When I got there, I was talking to people, just thinking that I could learn something. When I left I had already joined the program advisory committee.”

That scenario of getting involved and then finding themselves even more involved repeats throughout the Harrisons’ story. Packing toiletry kits at a school function led Charles to a position on the board at The Shepherd’s Staff, an outreach and support organization for those in need in Carroll County. Talking about sewing led Virginia to volunteer with 4-H at the Maryland State Fair. Carroll Citizens for Racial Equality, the NAACP, the Community Media Center, Common Ground on the Hill, Boys and Girls Club, and the Freedom District Lions Club are just a few of organizations where they’ve served.

“It’s like connecting the dots,” she said. “You tell me what’s going on. I see if I have something I can give you or some direction I can send you in to help with the problem.”

In Union Bridge, Perry Jones sees black history in Carroll County from the perspective of a lifelong Maryland resident, small business owner and local politician. Jones co-owns Tuck’s Service Center in Union Bridge, recognized as the first licensed black-owned business in Carroll County, and is in his 20th year of service as the town’s first black mayor.

Jones was a student at Linganore High School in 1968 when his father, Perry “Tuck” Jones, bought the Main Street service center. The son started working with his father at that time, and he and his brother took over the business when Tuck Jones died in 1980.

“We just got our certificate last year that our business was one of the first licensed black businesses in Carroll County,” he said. “It was a difficult time. It was 1968. Martin Luther King Jr. was just killed. It all came together about the same time.”

Union Bridge covers just over one square mile and has 995 residents; 3% are black.

“Fortunately, this part of Carroll County, I think, has always been well integrated. As far as the relationships between black and white, I haven’t seen much difference in this area,” Jones said. “The stigma seemed to be from some of the older people. The younger people today, they just don’t think about it anymore.”
Jones’ and his father’s work at the service center forged a connection with the community that drew both men to community service. In 1972, father and son became the first African-Americans to volunteer with the Union Bridge fire company — a service Jones still performs today. Tuck Jones was Union Bridge’s first black Town Council member from 1973 until his death in 1980 — when Jones filled his seat. From 2002-2006, Jones served as a county commissioner. Jones is currently president-elect of the Maryland Municipal League, which represents 157 municipal governments in Maryland.

That idea of getting involved in a community and then breaking barriers is prevalent in Carroll County’s more distant past as well. Mary Ann Ashcraft, the archives volunteer at the Historical Society of Carroll County, notes that the end of slavery in Maryland in 1864 and the return of black men who served in the United States Colored Troops (USCT) led to a marked increase in black involvement in the community.

“These men who came back had their eyes opened to what was beyond the little towns they came from — not just because of where they traveled to, which could have been just to Gettysburg or as far away as Texas — but because of the people they met, too,” Ashcraft said.

According to records at the historical society, 53 black men served in the USCT. Seven of them were killed in action or died after the war from wounds or disease.
One of those men was Simon P. Murdock. Murdock was born on the Frederick Dorsey Estate at Dorsey’s Crossroads. On April 4, 1864, he enlisted in the Union Army and fought in nine battles as a private with Company F, 4th Regiment, USCT. He was discharged nine months later on May 5, 1865, with a disability reportedly caused by a bullet that grazed his skull. Murdock is credited with establishing a Sunday school and presenting ground for the Strawbridge Methodist Episcopal Church. He was commander of Thaddeus Steven Post No. 40, G.A.R., and a charter member of Good Samaritan Lodge No. 39, I.O.O.F. He died April 11, 1933. His burial service was held at the Strawbridge Church and his grave is still visible at the Fairview Cemetery. His nearby house is now a private residence that has been expanded over the years.

That change isn’t lost on Virginia and Charles Harrison.

“Carroll County is slowly changing as more and more volunteers and minorities participate and as new people come in with new ideas,” Charles said.
“Getting involved is when change starts,” Virginia said. “People say, ‘I don’t have time.’ It’s not the time; it’s what you care about. Get involved with the things you care about, even if it’s just little things.” 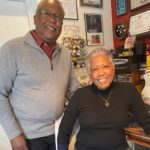 A reversal of the color barrier is happening in the historic Strawbridge United Methodist Church in New Windsor where Roy Sipes has been received as one of two ushers. Here he shares a Bible reading with choir member Rene Smith. Strawbridge Church was built by Civil War veteran Simon Murdock and his crew. 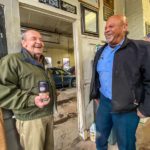