Carroll’s Stories from the Heart 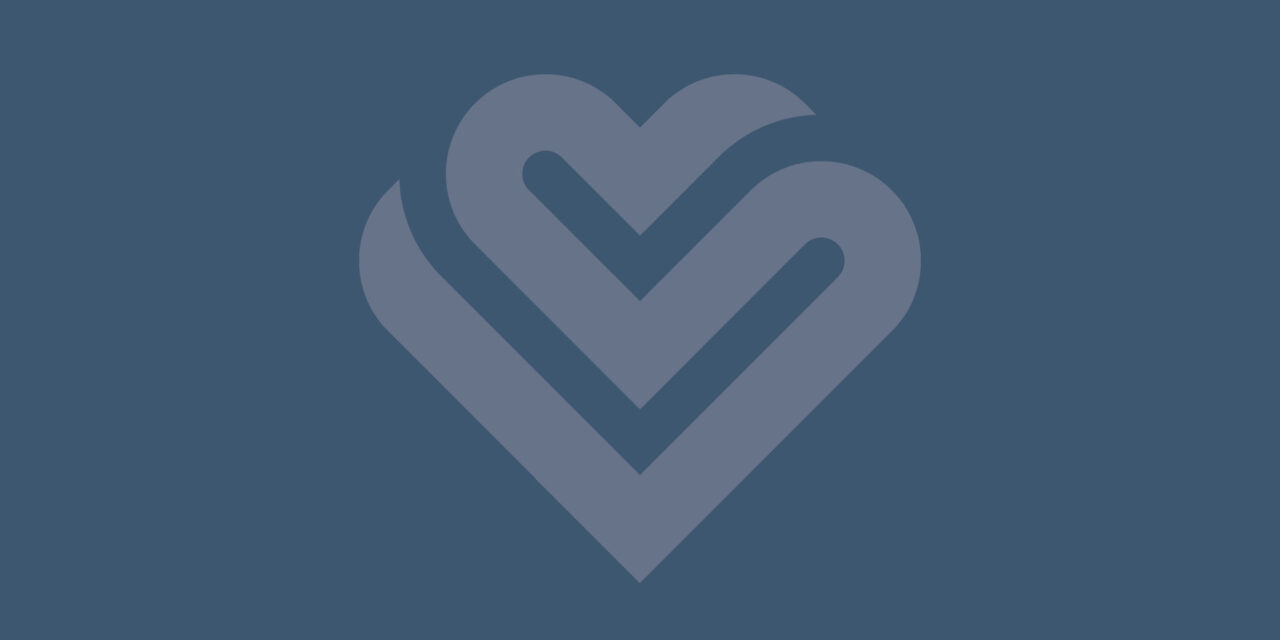 One of the hallmarks of living in Carroll County is that when help is needed, help arrives. Whether it comes from right next door, down the street, from the far reaches of the county or even extends beyond its borders, Carroll Countians are ready and willing to help whenever and wherever it’s needed. In 2022 we were coming out of the COVID haze — small businesses were struggling to figure out how to operate in the “new normal” and residents were cautiously returning to in-person events and finding a comfort level with leaving home. In spite of Carroll Countians trying to find their way back from a global pandemic, there were still those among us who were thinking of the well-being of others and going out of their way to make life better for their neighbors. Here are some of those stories. 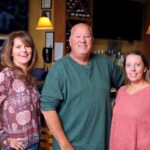 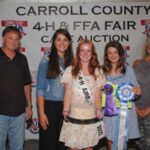 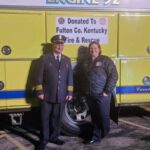 Of course, fire companies are in the business of keeping communities safe and helping when there is an emergency. And there also is a familial spirit of compassion and support among firefighters, regardless of county, state, or country boundaries.

Given that spirit and mission, it comes as no surprise that a Carroll County fire department came to the aid of the Fulton, Ky, fire department that had lost everything — equipment, four trucks, and their fire station — in a tornado on Dec. 10, 2021. 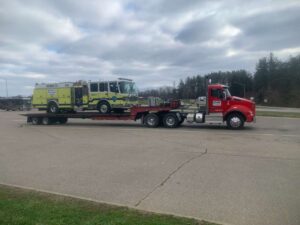 Jack Haden donated a truck, trailer and driver to transport the engine to Kentucky.

At the time, it just so happened that the Reese & Community Volunteer Fire Company was attempting to sell a custom pumper truck on the resale market. The truck had a 1,000-gallon tank and less than 45,000 miles, but it was lime green and the color was making the truck difficult to sell.

“The Fulton County Fire Department is a small, community fire department, similar to Reese in that there isn’t a big municipality supporting it,” said Kati Townsley, the Reese company’s first vice president, board chair and public information officer.

“We had this wonderful resource that we could donate — it was going to be a do-good and a feel-good at the same time — so the decision was made at the board level and then it was proposed to the company for a vote,” Townsley recalled. The vote was unanimous that Reese would donate the lime-green pumper truck to the Fulton County fire company.

But the outreach didn’t end there. In addition to the Reese membership, Townsley rallied the community and in short order had lined up financial, service and item donations.

“Jack Haden, owner of Baltimore Recycling Center and a resident of Carroll County, donated a truck, low-boy trailer, a driver to transport the engine to Kentucky and a 40-foot shipping container,” said Townsley. “John Alban, a Baltimore Recycling Center employee and Essex Volunteer Fire Department member, drove the truck carrying the engine. Terry Smack, owner of Terry’s Tag and Title Service, donated the cost of fuel and lodging for the drive to and from Kentucky, and Bruce Leibowitz, owner of Rockdale Towing, donated a truck and driver — Patrick Flowers — to transport the container of supplies to Kentucky. They also donated the cost of fuel and lodging,” she continued.

On Dec. 22, just twelve days after the tornado, Reese VFC started a drive for donations for the Fulton fire department, its firefighters — some of whom lost homes — and residents of Fulton County. Over two weekends, community members dropped off non-perishable goods, diapers, coffee, coffee makers and other small household appliances, clothes, toys, and cleaning supplies to go with the hose lines, turnout gear, EMS supplies and rescue tools donated by Reese. 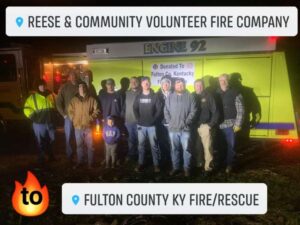 The Fulton County Fire Company on the night the engine was delivered to them – January 3, 2022.

Chief C. Wade Adams of Fulton County Fire & Rescue wrote that the donation of the pumper truck was “a true blessing.” He said the truck has served as the primary engine for responses to “structure fires, motor vehicle accidents, public relations events, and several mutual aid calls.” He concluded by writing, “Your kindness during our time of need has created a special place for Reese & Community Volunteer Fire Department in the hearts of the members of Fulton County Fire & Rescue” and the larger community.

“I’ve never been so proud of the way this community came together,” Townsley acknowledged. “We’re a family and it matters not where you are. When you find someone else in the community who’s in need, especially if they’re part of your brotherhood and sisterhood, you want to help them out as much as you can.”

Local business owners Kenny Staley and Trevor Hoff have been bidding on cakes at the 4-H Fair cake auction for years. However, their bidding war at the 2022 event set a record for the highest price paid for a cake at $20,000 — topping the old record by $4,000. 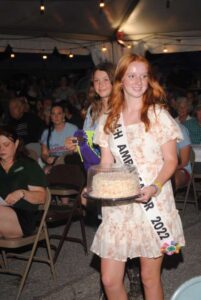 The winning bid by Staley and the group he represents — the Good ‘Ole Carroll County Farm & Business Supporters — helped the cake auction raise a record $130,000 to support the future of the county’s 4-H & FFA Fair.

According to Staley, who owns and operates Staley’s Body Shop in Westminster, the rivalry with Hoff and his group, the Carroll County Farmer’s Syndicate, dates back to 2017 when a member of the syndicate challenged Staley, saying that he couldn’t afford to buy the grand champion cake. “I did bid on it at the time and I believe I took [the bidding] up to around $5,000.”

After Hoff’s group outbid Staley that year, the annual bidding war at the cake auction became something of a thing. The Good ‘Ole group joined forces in 2018 to bid a record-breaking (at that time) $12,000 for the grand champion cake and, in 2019, the group topped their previous record, with $15,000 as the winning bid. In 2021, the groups joined forces to win the grand champion cake with a bid of $16,000.

Despite years of bidding against each other, Staley and Hoff are like-minded when it comes to why they try to outbid one another. “The main goal of both Trevor’s group and my group is to bring in as much revenue for the fair to keep it a free-of-charge event,” Staley explained. Thanks in part to Staley’s and Hoff’s efforts, Carroll’s is the only free county fair in the state. The only charge is a fee to park.

“These kids work so hard every year to put on a great fair,” Hoff said. “We, as a group, want to see it continue. These kids are learning life skills that they don’t learn in school, which help them be awesome members of the community later on in life.” Hoff, who was an FFA member in high school, also has helped with the livestock auction annually since 2008.

Hoff is the owner and operator of Local Homestead Products, an on-farm market in New Windsor that offers home-grown produce as well as meat products.
Staley got into farming when he purchased a 20-acre farm outside Westminster in 1980, and he now farms sizable acreage in Silver Run.

Staley’s Good ‘Ole Carroll County Farm & Business Supporters has 18 members, mostly local businesses but some individuals. “Contributions to the [cake auction] pool is not a set sum,” he said. “They put in whatever they choose and I usually make up the difference” for the winning bid, he continued. 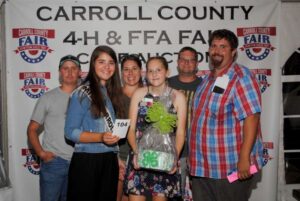 Hoff’s Carroll County Farmer’s Syndicate is made up of “farms, businesses and individuals throughout the county, some of whom have been involved in 4-H or who have children who are in the program now,” he said. “We all [view] the fair as an important part of the community and want to see it continue.”

“We have a buy-in to the Syndicate,” Hoff said. “But we have many members who put in way more than that.” They have a set amount that goes to the cake auction, but “sometimes we get a little more [right before the auction] and that helps add to the total,” he said.

Although he wasn’t raised on a farm like Hoff, Staley said that “the life of a farmer and farm life is something I enjoy and appreciate. If they weren’t exposed to it, how would young people ever know?”

Hoff agreed. “The money we spend is an investment in our youth that pays off huge dividends later,” he said.

Eldersburg resident Deanna Dovel was severely sick with both COVID and a bacterial infection in January 2022. “I was sick for seven days or so,” she recalled, “and not able to really do anything.”

A post by Dovel on social media about her illness caught the attention of Kelly Kluka and Bill Wiley, owners of Bistro 91 in Finksburg. 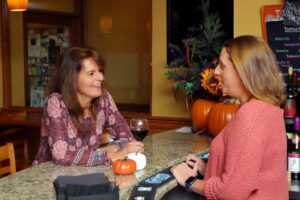 Deanna Dovel and Kelly Kluka catch up at Bistro 91 in Finksburg.
Photo by Nikola Tzenov

“Kelly reached out via phone and offered to bring food,” Dovel explained. “Kelly asked what I would like to eat, and I responded, ‘chicken noodle soup!’” In addition to soup, Kluka brought a meal for the entire family.

“When we heard of someone who was sick and were worried about how to feed their family when they couldn’t leave the house, we wanted to help them,” Kluka said. “We figured that while we can’t do much to fight COVID itself, we can help people get through it, and make it easier for them.”

Kluka pointed out that in addition to delivering meals to those with COVID, they delivered meals to folks who “recently had surgery, were not allowed to drive or did not have the financial means to order delivery for their family every day while they were out of work.”

Most meals were delivered in the Finksburg, Westminster and Eldersburg areas and were things that could be easily reheated and serve more than one meal, like trays of pasta. Kluka said that they always “contacted the family first to make sure they were comfortable with us dropping food and some goodies off for them.” They also made sure there were no food allergies they needed to consider and found out what family members liked to eat. “We know kids sometimes can be picky eaters so we always made sure there was something for everyone in the family in each meal.”

Kelly and Bill are Finksburg residents and have owned Bistro 91 for nearly five years. She said that “Bistro 91 has always been about ways of serving the community. We support all the local schools, sports teams, charities, fire departments, pretty much anything with a local tie. We will always look for ways to help struggling families, whether that be because of COVID or because of financial difficulties.”

While families were struggling with COVID, like many businesses, Bistro 91 struggled as well. “Some of the more challenging things during the pandemic were shortages,” Kluka noted. “Food, alcohol, packaging containers, pizza boxes, even dry yeast to make dough was difficult to get. Pricing on everything increased substantially. Some of these issues still occur to this day.”

Of the meal deliveries, Kluka said, recipients were “extremely appreciative and grateful, especially if they had small children. It made mealtime so much easier if they could just heat something up for their kids and not have to cook a full meal.” They delivered pasta, salad, bread, and dessert and sometimes pizza and soda.

“I felt so thankful to her for reaching out and offering to bring the meal,” Dovel said. “I felt loved and cared for. Kelly is a friend who embraces the community and loves to help others in a variety of ways. The food delivery from Bistro 91 was such a heartfelt and practical way to serve in our community and touch the lives of those around them.”

Bistro 91 still delivers meals, although Kluka noted that as the infection rate of COVID has slowed, so have the deliveries. “But being a community-oriented restaurant, if we ever hear of a family in need, we will make sure they have food on the table.”