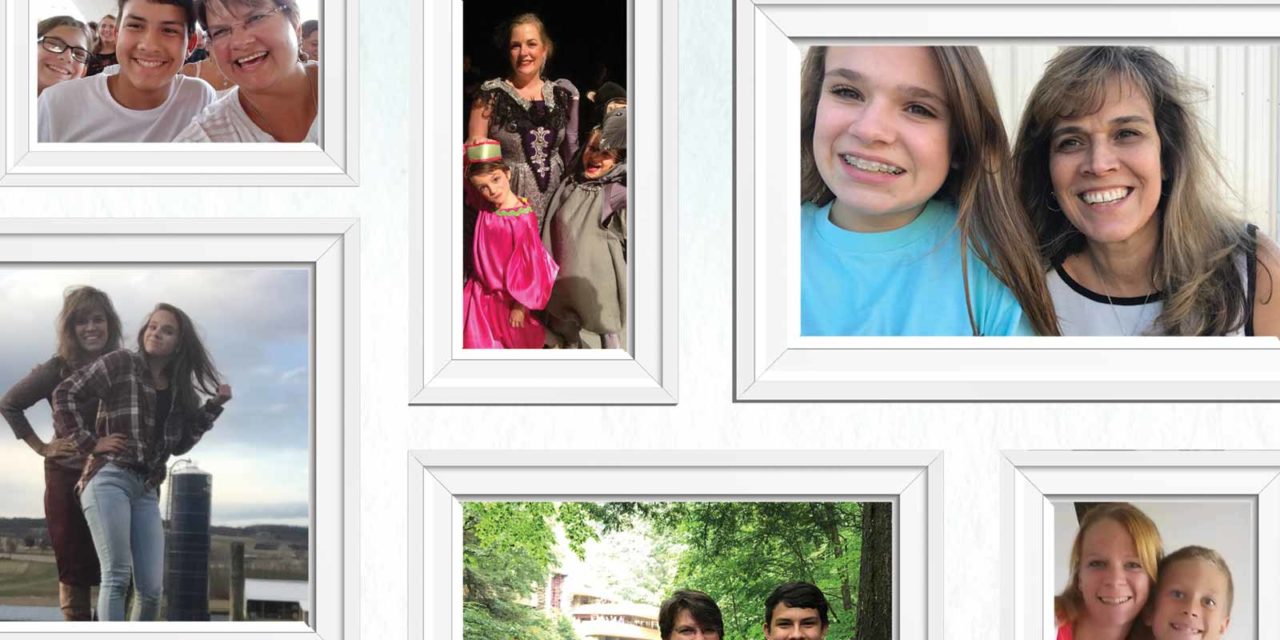 A lot of single moms don’t plan to land in the single-mom category. They start their journey with a partner, envisioning shared support and collaboration as they raise their children. And they often arrive at single motherhood only after slogging through heartache, stress, chaos and loss. Being a single parent tests a woman’s sense of spirit and self-confidence, forcing her to find strength and resolve she may have not known she possessed.

“It’s really hard to find joy in my situation,” Denise Harmon of Manchester said. “But I am so thankful for my daughter because that is my No. 1 reason for pushing through and accomplishing everything I have since [my husband’s] death.”

But in spite of the challenges, several local moms say that they have no regrets in their journey as a single parent, and in fact have grown stronger and more patient through the experience. As we prepare to celebrate Mother’s Day on May 13, we’ve explored what single motherhood looks like for some of Carroll County’s moms.

“I have grown so much as a person being a single mom,” said Taneytown resident Gail Cousins. “I have been able to focus more on myself and my children. I have had time to think and pray on who I really am, and I have become much more confident with who I am and have learned to never compromise that.”

Although the majority of America’s 73.7 million children live in two-parent households (69 percent), the U.S. Census Bureau reports that the second-most common family arrangement is children living with a single mother (23 percent).

According to the National Women’s Law Center, more than one in nine single mothers who worked full time in 2015 were poor.  The poverty rate for single-mother families in 2016 was 35.6 percent, nearly five times higher than the rate for married-couple families (6.6 percent). And according to Cousins, it’s challenging to keep an employer satisfied while also attending to the needs of children.

“I don’t think all people understand how much running we actually do,” Cousins said. “Employers and co-workers don’t always understand why we have to sneak out of work early or come in late or call out when our child is sick. People don’t realize that I am the only option.”

Charlotte Hetterick has been a single mom to her two kids since getting divorced seven years ago. The Hampstead resident said that there are many challenges that shape every aspect of her life.

In addition to time management, and the fact that child support does not cover a lost second income, she said that being a single mom has meant also becoming a handyman and a jack-of-all-trades, taking on tasks that never before fell on her shoulders.

“There are other things you don’t think about at first, like maintenance around the house, learning to handle small repairs and finding someone reliable to take care of tasks I can’t handle,” Hetterick said. “And silly little things, like realizing I’m the one that has to kill the big furry spider climbing up the wall.”

Hetterick went on to say that, although it’s not a priority at first because so much energy is spent making sure the kids are acclimating, focusing on yourself can be difficult.

“My schedule is so full that it took me a while to realize that I have lost touch, that it might have been months since I have seen some friends, some even a couple years.” Hetterick said. “I don’t always get to the ‘me’ part of my to-do list.”

And losing it every now and then is part of the process.

“There are definitely times where I feel completely overwhelmed — I have a mini-meltdown, pull myself together and keep marching on,” Hetterick said.

Cousins, who has been raising her daughter (now 14) and son (now 8) since her divorce four years ago, said that, over time, she has learned to find the silver lining.

“The positive I have taken is in realizing that due to visitation with their dad, I have four days a month to do whatever I want,” Cousins said. “I absolutely love spending time with my girlfriends and a few other single moms, and we have started going camping and doing more things for our emotional well-being without feeling guilty.”

A newly single mom to three kids following a divorce, Dawn O’Croinin of Sykesville said that staying connected to a network of single parents has helped her keep her sanity.

“I have an outstanding network of single parents who I’ve known throughout my life who support me in my journey,” O’Croinin said. “Just having those little checkpoints — connections from near and far — makes all the difference in the world.  My network of moms in Sykesville truly make my life easier.”

Manchester’s Denise Harmon didn’t have any say in becoming a single mom to her daughter. Three years ago, when her daughter was 9, Harmon lost her husband unexpectedly to a brain aneurysm. Although she didn’t choose to be a single mother, she said that she and her daughter have been forced to evolve and grow in the face of tragedy.

“I never realized how strong of a woman I am, and that I am capable of doing more things than I ever imagined in my life — only because I was forced to do those things,” Harmon said.  “I have accomplished things that I never thought I could do. But I guess when you’re thrown into a situation, you either sink or swim. And I refuse to sink.

“I want to set a good example for my daughter and let her know we can do this and be strong together,” Harmon said.

THERE IS JOY HERE

Renee McComas of Westminster is raising her two children as a single parent after a divorce in early 2017. She said that the challenges of becoming a single mom were overwhelming, but that in finding herself and a sense of stability over the last year, she has developed stronger bonds with her children.

“I spend a lot of time with both my children since now it’s just us,” McComas said. “I have more one-on-one time with them, and that means I have closer connections with them. They tell me more things, share what is happening in their lives and with their relationships. They open up a lot more now than they did before.”

Cousins has experienced the same thing, saying that it is the tight bond she has with her children that gives her confidence that she’s heading in the right direction.

“Sometimes I don’t know if I’m doing it right, but when I have both kids snuggling in bed with me, telling me how much they love me, it makes all right with the world,” Cousins said.

For Hetterick, the joys of single motherhood come with the simplest of moments. She said that for her, happiness is “just the three of us chilling on the sofa watching TV” or “when just the three of us have an inside joke that only we get.” She adds that she knows she is doing something right because her kids are amazing people.

O’Croinin said that her journey has been made easier because she knows her children have confidence in her.

“What make this easier is seeing the confidence in my children’s eyes,” O’Croinin said. “As long as I have that, I can do anything.”

Some people choose to be single parents and some find themselves raising children alone through no decision of their own. Single-mother households are increasing in the United States each year, and it’s clear that those families face many challenges and hardships. But for many women, becoming a single parent begins a journey that starts with bewilderment, fear and a sense of unimaginable responsibility, then evolves into something closer to controlled chaos — where there is a sense of accomplishment and self-confidence, and closer family bonds. The challenges remain, the struggles persist, but there is also joy.

“All the little things that people stress over, like dishes, laundry, putting on appearances — none of that crap matters. And being a single mom has brought all of that into focus for me,” Hetterick said.

Denise Harmon:  Never give up. You can do whatever you put your mind to. And most importantly, it shows your children strength to get through those tough times and not give up. I believe your children learn by example, and I hope I am setting a good one for my daughter.

Gail Cousins:  Love yourself! Love your children! Apologize to them when you are stressed and explain to them how hard it gets sometimes. Don’t ever feel sorry for yourself. Know that God only allowed this for his purpose!

Dawn O’Cronin:  Build a strong support network. I am fortunate to have my mother, who adopted me when I was one month old, and also a solid relationship with my biological mother, who I met when I was 18. Having those two strong women in my corner is amazing.

Charlotte Hetterick:  Take help when it’s offered to you. I have found that family and other single moms are my best support group. Other single moms know how much something simple like bringing your kids home from practice means. You will need those “gifted” hours. You are going to feel overwhelmed, make sure you have some kind of therapeutic outlet (friends, family, exercise, just crying). Even though finding “me time” is difficult, try to carve out little snippets of “me time” for things that rejuvenate you, like a pedicure, a walk or reading a book. Those free moments help keep you sane.

Renee McComas:  Never give up at all. It can be tough and tiring. Remember the children learn and see things. They are sponges. They know more than we think they do.