Chivalry in Modern Times: Not Dead, But Definitely Evolved 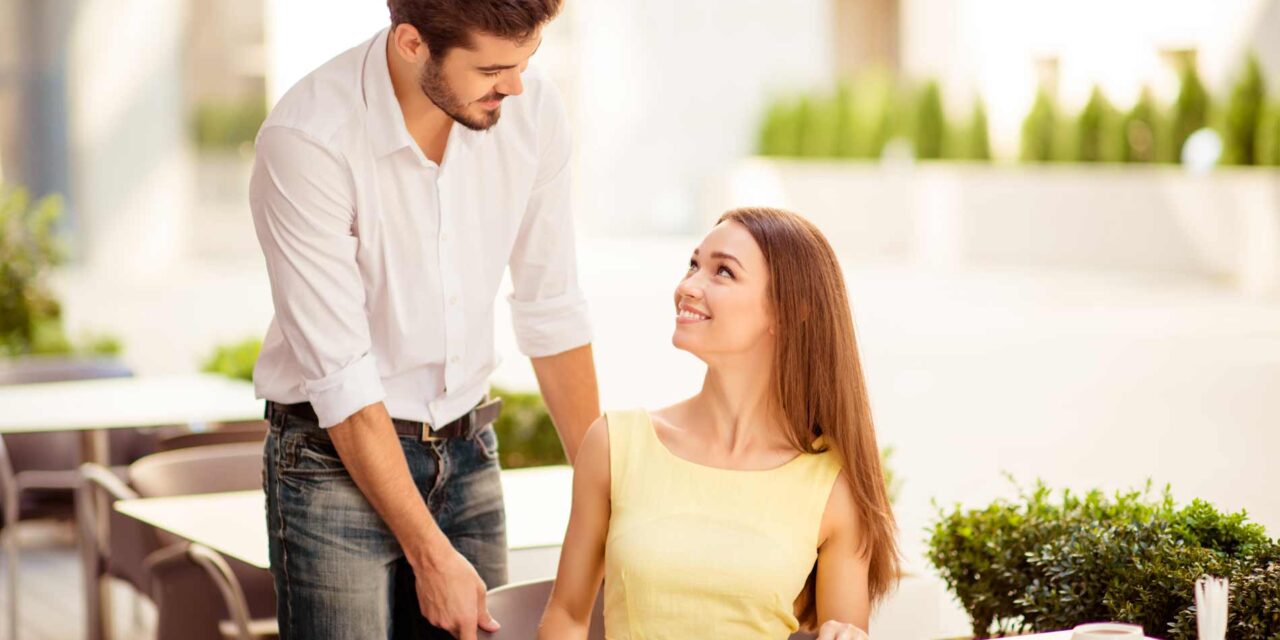 When my now-teenage kids were in elementary school, I drove them up our long drive each day to wait for the bus. When the bus would appear down the road, they would hop out of the car and stand waiting for the bus to stop and the driver to throw the door open with a welcoming smile. Every single day my son made sure he was the first one on. For what it’s worth, I don’t think my daughter ever cared or gave a second thought to who got on first. But I recall watching the scene play out day after day, each day silently hoping that he would step aside, just once, and let her go on before him. Worried that “chivalry is dead,” and thinking my son might be helping to kill it, I had a conversation with him in which I informed him that sometimes it’s nice to let someone else go first, and added that it’s also nice to hold the door for someone coming behind you, and nice to move over a little to give someone else room to sit.

It wasn’t the next day or the day after that, maybe it was the following week, but one day I caught my breath when, standing there waiting for the bus door to open, my son stepped out of the way and let his sister go in front of him. He glanced my way to make sure I saw it before following her on the bus. I was relieved that my little guy has the capacity to be a gentleman, and noted to myself that it will be important to continue teaching, modeling for both my children, the niceties that are associated with chivalry. For the record, I do not believe he let her on the bus first again for the rest of that year, but I was confident he got the point.

I told this story of my son and daughter in an editor’s note a few years ago, and since then I have often wondered about chivalry — in a time of rampant technology and so much digital interaction if it’s still a thing. And where do people learn the behaviors that come with chivalry? And as we embark on Valentine’s Day I wonder if chivalry is still considered generally how a man treats a woman. My research turned up some interesting insights and I have to say, I am pretty sure we’re heading in the right direction.

What is chivalry, anyway?

According to the Cambridge Dictionary, chivalry means very polite, honest, and kind behavior, especially by men towards women. It refers to the system of behavior followed by medieval knights that put a high value on honor, kindness and courage.

Digging a little deeper, it appears that perhaps the rules of chivalry were created more to keep “thuggish” knights in check than to make them kind and gentle people. An article on history.com explains that in the middle of the 11th century, the knight was not a particularly honorable figure. The article explains that chivalry was thought of more as a military ideal for how warfighters behaved until after World War I, when the word was somewhat divorced from the ideals of war and became more associated with a romanticized version of how men should treat women.

Roxana Harlow, assistant professor of social sciences at Carroll Community College, said that the idea of chivalry is still associated with men in our collective imaginations — “that is, a strong, protective, and attentive man coming to a woman’s rescue to ensure her comfort and safety.”

But it appears that our collective definition of chivalry continues to evolve. Or should, at least.

Chivalry — as in specifically referencing how a man traditionally treats a woman — yes, that version may be dead or dying. But don’t despair: There may just be a better version, or more inclusive version, of chivalry at work today.

“I think we need to lose the gender connotations,” says Eric Hess, assistant professor of social sciences at Carroll Community College. “We can embody characteristics of chivalry by respecting others, supporting and advocating for marginalized individuals, and becoming engaged and educated on issues that might prevent us from doing so.”

Harlow agrees, saying that “younger generations are decoupling the ideas of chivalry from gender role expectations, and instead view the qualities of chivalry as a general set of social norms to include being kind, polite, thoughtful and honorable.”

So while the term itself may be murky, based on its long history and varied associations, there is a general agreement that the ideas associated with chivalry are still alive and well.

“I think the ideas associated with chivalry are still valued and important,” Harlow said. “Where the tension lies is in the transitional space between chivalry as something men do for women, and chivalry as something we all do for each other regardless of sex and gender. The meanings and expectations around chivalry are in flux, and thus ripe for misunderstanding.”
Hess added that we’re in trouble if his notion of modern-day chivalry is dead.

“I think modern-day chivalry should largely embody human decency. I think if this is not valued, society is in trouble and human behavior regresses,” he said.

Hess goes on to suggest that, rather than considering if chivalry as we knew it exists, we ask whether we need it.

“Does chivalry, as we know it, with its gender connotations, need to be alive? We can, and I hope we do, have a code of moral conduct for ourselves — men and women. We can certainly be decent, considerate, people, filled with justice for marginalized individuals, regardless of gender,” Hess said.

Where does it come from?

After hearing the insights of several experts, I believe I was on the right track with my son in coming to understand that we would have to teach him, show him, how he should treat others. As with so many things, you’re not necessarily born with an understanding but rather have to learn it in your environment. Which means we all have an ongoing role to play.

“People learn this like they learn all behaviors, through socialization that occurs through a myriad of social institutions and interactions that make up our everyday existence,” Harlow said.

But Harlow cautions that what we are taught is often as important as what we are not taught. She offers the example that we may be taught to be kind and polite, and say “sir” and “ma’am,” but if you’re not taught to respect all people, but only those that you perceive to be like you, “then you may be a great person to some while being a terrible, rude, unhelpful bigot to others.”

“We may be taught that women should be cherished and taken care of because they are vulnerable, but if we’re not taught that all people are responsible for being caretakers as well as caregivers because we are all vulnerable as human beings, then that can lead to a seemingly wonderful gentleman treating women as if they are not smart, strong, or stable enough to be in a leadership position, have their opinions matter, know what they want, and be taken seriously,” Harlow said.

We’ve established that our notion of chivalry, or at least the qualities that make up chivalry, has evolved, and I might say continues to evolve. I think the important takeaway here is that it falls on the shoulders of each of us to make sure we’re continuing to evolve as well.

“It is all of our responsibility to teach these ideas to children and each other. We don’t stop learning this just because we grow up. We are always learning and relearning ideas of kindness and decency and respect,” Harlow said.

“We shouldn’t be worried that our kids aren’t getting it — we should be worried that we aren’t getting it. Kids will learn (and often improve upon) what they are taught, hear, and practice. If they’re not getting it, that’s our fault, not theirs. I think what has and hasn’t been modeled for our children over the past year is a good example of where we are failing them in this learning process.”

What does chivalry mean to you?

Jake Fine, 21, is a senior at McDaniel College.

“When I picture ‘chivalry,’ the first thing that comes to mind is an image of a knight in shining armor. Traits I’d associate with chivalry include respect, honor, decency, intellect, and courtesy. Generally, I’d picture this character as a man, because all of the media I’ve seen associated with chivalry has featured a male-presenting figure. I think, when I picture chivalry, I especially consider it in the context of a heterosexual relationship, almost a ‘courting’ ritual.

“I think that while everyone wants this respect, there’s a patronizing tone that has accompanied many demonstrations of chivalry that I’ve witnessed. I believe that the ideal of a chivalrous person — someone who is respectful, caring, courteous — is still as strong as it ever was. However, I think there’s been a mass realization that the example of this figure has been problematic, and the actions from this figure have been problematic. I believe that this realization has come especially as a result of feminist movements. I think that chivalrous traits have remained desired, though, even if they take a different name — especially since many people may share that old-fashioned view of ‘chivalry’ as I do: where we picture the young knight, swooping in to woo his lover, demonstrating how much more ‘honorable’ and ‘noble’ he is than the average peasant.”

Kathleen Thomas is a Carroll County resident and mom of two.

“I went to a women’s college in the early 2000s. Third Wave feminism was at its peak. I felt it to some degree when I studied abroad on a multi-gender campus but acutely when in a small microcosm of women. We even had shirts that read ‘Lesley. It’s not a girl’s school without men; it’s a women’s college without boys.’ What I found then was that it wasn’t as much that chivalry was dead but rather challenged as a gender-specific notion. I was proud to hold the door for a guy or pick up the check. It was seen as aggression to some men, but not all. In this fourth wave I think what I see and feel is a stunting of growth. Chivalry isn’t dead as much as never had a chance to thrive and grow. As a mom of two humans I’m aware of this. We teach humanist values in our home that both support the notion of chivalry as a courtesy to all genders but also the self-respect and awareness of how they would like to be treated.”

Matthew Knights was born and raised in Carroll County and is now dad to a 13-year-old son and a 7-year-old daughter.

“I don’t think chivalry is dead. I think there are men who still open doors for women, walk on the outside of the sidewalk closest to the road, and who offer to carry everything so the woman who holds his heart doesn’t have to do it.

“My opinion is that it starts with fathers teaching their sons to respect their mothers (and sisters). To do the things mentioned above, and overall be helpful. Unfortunately, marriages don’t always last, but those lessons of respect can still be taught and emphasized regardless of the relationship between mom and dad.”

On the other side, I wonder if gratitude is being practiced the way we were taught, or if people expect to be treated as the center of attention and take acts of kindness for granted.” n