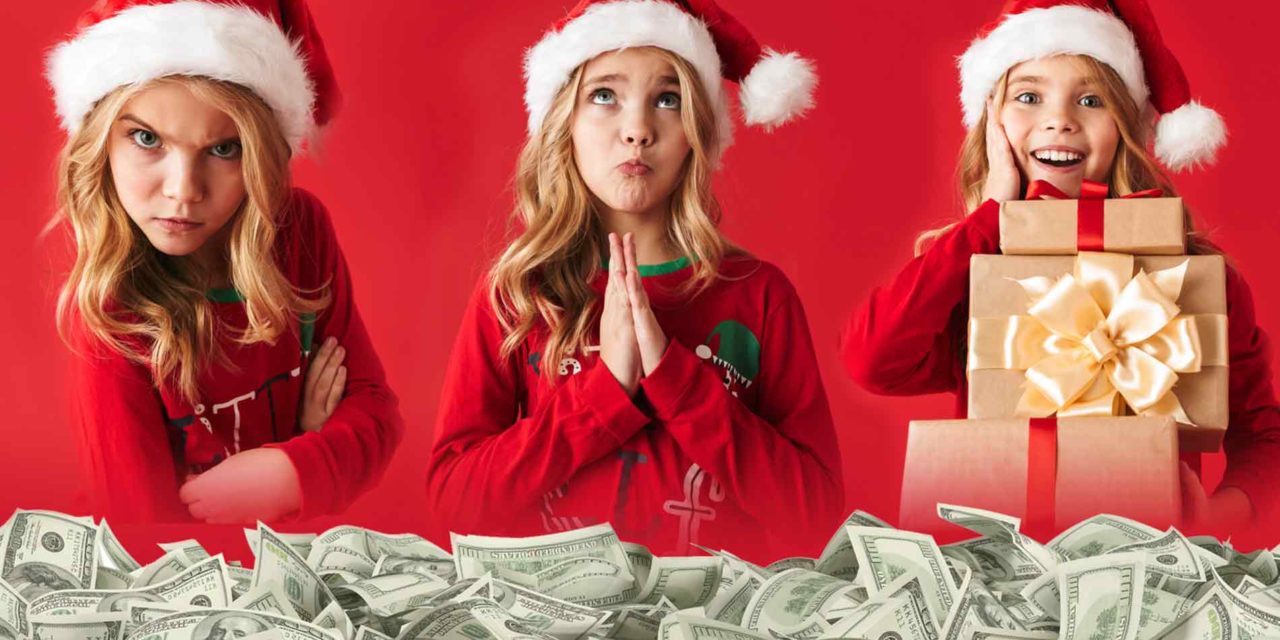 I was 4 years old, and I was not impressed.

Sleepily walking into the living room on Christmas morning I surveyed the overabundance of toys and presents before me. Everything a little girl could want — a life-size doll, a highchair for that life-sized doll, a kitchen set, etc. Family lore says that I stood there for a moment, shook my head with slight disgust and said, “too much.” Then I turned around and went back to bed.

My mother would often recall this story with a chuckle. She said I hadn’t asked for it. I certainly hadn’t demanded it. And I was a bit overwhelmed by why there was so much of it.

“Materiality, materialism and how much happiness and satisfaction we get from things is something that has permeated our culture for a long time,” says Jeffrey Podoshen, a professor of marketing at Franklin and Marshall College, as well as an adjunct professor with the University of Maryland Global Campus, whose research includes consumer behaviorism.

And even five decades ago my usually budget-minded and, to be honest, somewhat struggling family was affected by this. Today not much has changed. If anything, we are spending even more. The National Retail Federation estimates that the average American will spend $700 on holiday gifts and goodies this year, totaling more than $465 billion.

Year after year, we promise we won’t overspend this Christmas, but then we do. We seem to lose our better judgment among the aromas of cinnamon and pine, the sight of twinkling lights and the sounds of Christmas carols. The Christmas season is much like the flu season — infectious, contagious and with the potential of being caught by almost everyone we know.

Kimmye Stradone admits to catching this Christmas bug year after year. “Last year I easily spent $1,000 on just my son for Christmas, and my daughter, who was only 11 months old, got almost just as much,” says Stradone, of Sykesville. “This year I have to keep myself in check, although I say that year after year.”

And she is not alone.

Why do we do it? Why do we spend too much? Why do we buy too many gifts? Why do we over-decorate and spend a fortune doing so? Why do we get the Christmas crazies, as I like to call it?

“It’s almost like it’s the norm to spend too much on Christmas,” says Podoshen. “We look at what other people do as a cue for our own behavior. We kind of want to be humble, but we’re influenced by what’s happening around us.”

And retailers are more than glad to perpetuate the message of buy, buy, buy. “They stir up the excitement with Black Friday deals and Cyber Monday deals, and then make them scarce,” Podoshen says. “And when things are scarce you want them more. The next thing you know, people are literally stampeding with each other at Wal-Mart when it opens on Black Friday to get a cheap television.”

As Stradone can attest, so many of us go in with the best of intentions. But sometimes that planning and preparing backfires as well. In some twisted way, it seems to give us permission to spend more. Our budgets and obligations have been met; we can have some fun now! After all, we are faced with lots of good bargains as the holidays approach. And our mental radar is switched over to gift-giving, which translates into buying and buying and buying.

Children can be quite the driving force in this Christmas spending frenzy. Many people describe this time of year as magical, especially for children. But in many ways, it is a magic of our own making. We encourage the idea of this jolly fellow who brings you gifts. You need only to ask him. And, how many parents have been lured into buying the “it” toy of the season?

“We’ve allowed it to happen,” says Leslie Esterman of Eldersburg, who at one point celebrated both Hanukkah and Christmas when her son and daughter were smaller, buying gifts for both holidays. “Marketing is doing what they do in hopes that we are doing what we do. I guess it stops with us.” But, “it’s pressure.”

Regina Vorbach-Boegel of Sykesville agrees. “The years I didn’t have an ‘it’ toy, I was really happy,” says the mother of four.

Then there were the other years. The “it” toy years — the years of Cabbage Patch Dolls, Tickle Me Elmos, Hatchimals and other must-haves. One Christmas, Vorbach-Boegel’s young daughter wanted a Wuv Luv. “I wasn’t even really sure what it was,” she says, laughing. “I went to store after store looking for a Wuv Luv. It was getting closer and closer to Christmas Eve. Finally, I went to a store and waited in a long line to ask about the Wuv Luv. I said, ‘I’m not really sure what I’m looking for, but my daughter has asked for a Wuv Luv.’ Of course, they knew exactly what it was.”

“The big deal with the Wuv Luv is that it gives birth,” she says of the “fuzzy, furry, animal, alien-looking sort of creature.” After forking over $50 or $60, says Vorbach-Boegel, “I get the Wuv Luv and go home.”

Christmas morning comes. The Wuv Luv is activated and the egg inside its belly comes out containing a baby Wuv Luv. “That was it,” says Vorbach-Boegel. “I was like, can’t we shove the egg back inside again? Can’t it give birth again? Nope. Only once. And she never played with the toy again. I have discovered the must-haves are usually the most expensive and least played-with toys.”

And sometimes it is all too much — the shopping, the spending, the expectations and obligations. Sometimes we need to step back or walk away. And the woman who went on the search for the Wuv Luv has also been known to do just that. One Christmas her oldest daughter wanted a talking Barney (The purple dinosaur who sang and danced, and was like the Beatles to the toddler set a couple of decades ago).

After taking the last Barney on the shelf, Vorbach-Boegel stood in line, waiting in the crowded store to purchase the toy. “I was holding this Barney doll, waiting to check out in this long line, and he kept talking and talking,” she recalls with a chuckle, now seeing the humor in the situation. “He was giving me a headache.”

Barney wouldn’t shut up, and she had had enough. At that moment she made a decision. “Barney was not coming home with me,” she says. “I put him back and left the store.”

And, according to Vorbach-Boegel, Christmas was not ruined. In fact, her daughter was a bit indifferent.

“She had other gifts, other things to distract her,” says Vorbach-Boegel. “She was fine. Just fine.”

Vorbach-Boegel had gambled and won, pushing back on the Christmas crazies. Her daughter had plenty of gifts that day, but in the words of a little girl 50 years ago, not “too much.”

And sometimes maybe not too much can be enough after all.