Down on the Family Farm 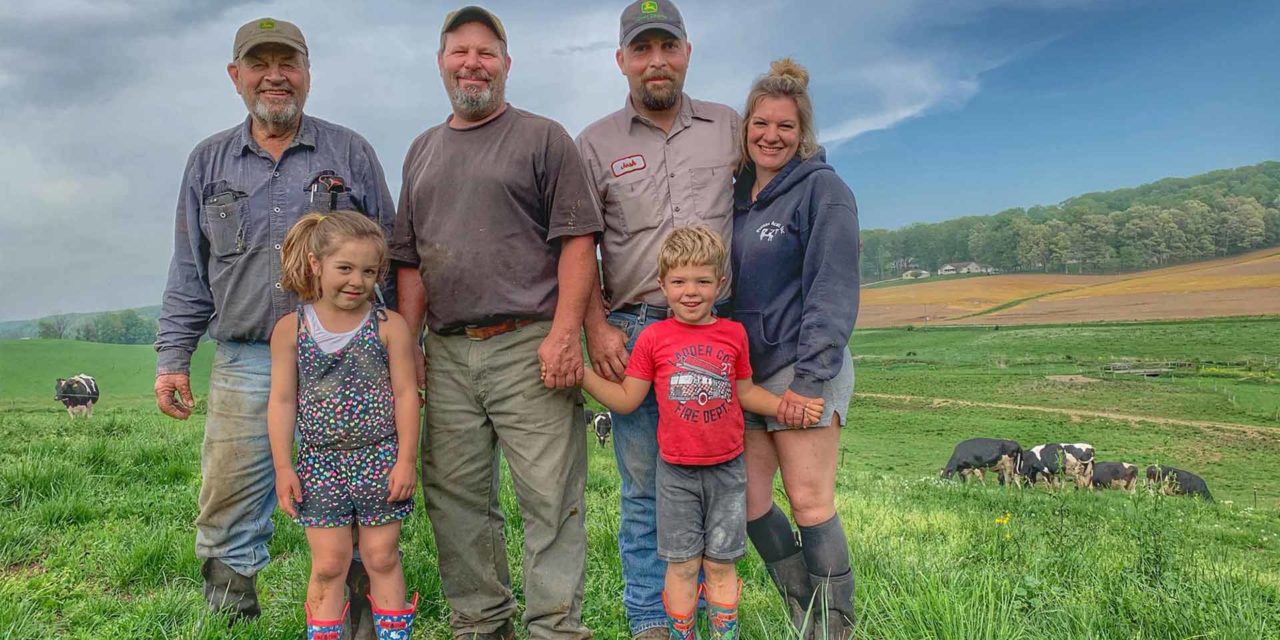 Above: The Sellers family of Panora Acres include great-grandfather Norman, grandfather, Harry, father Josh and his wife Stacy, and their children, Emma and Eli.

Every morning at 5:15, Grayson Dell rises to help out on the family farm. He gets his work in for a few hours before departing for Ebb Valley Elementary School in Manchester, where he joins his first-grade classmates.

Although just 7 years old, Grayson thrives on his sense of responsibility. “I’m helping the animals stay alive,” he says, describing how he serves the correct number of food scoops to the family’s goats, horses and chickens.

“I like farming, helping my dad [Matt Dell], Pappy [grandfather Francis Dell] and Clayton [older brother],” he says. “And I like driving the tractors on my own. My dad taught me.”

Dell’s Generation Farms is one of many family-owned and -operated ventures that span generations. Once old enough to understand, kids like Grayson contribute any way they can. Of Carroll County’s 1,174 farms, comprising more than 146,000 acres, according to 2017 census data, the vast majority are family-owned and have operated for generations, according to Diana Hare, agricultural development specialist for Carroll County.

4-H is a national organization that promotes youth development based on the four values of Head, Heart, Hands and Health, as expressed in its pledge:

I pledge my head to clearer thinking,
My heart to greater loyalty,
My hands to larger service,
and my health to better living,
for my club, my community, my country, and my world.

The organization originated in 1902 in Ohio as corn clubs for boys and canning clubs for girls. Today, it is connected via cooperative extension to 100 universities across the United States; Carroll County programs are tied to the University of Maryland Extension. Children ages 5 to 18 complete yearlong, hands-on projects in areas like health, science, agriculture and civic engagement that are judged at events including the Carroll County 4-H & FFA Fair, which runs July 27 to Aug. 2 this summer.

4-H’ers participate in more than 50 activities, including robotics, shooting sports, photography, gardening, crafts, art, and woodworking, as well as raising and showing animals. The children document their projects and the life skills they learned through participation.

“The emphasis is on what they are learning, and building life skills,” says Becky Ridgeway, 4-H agent for the Carroll County 4-H University of Maryland Extension, citing decision-making, leadership, communication, teamwork, responsibility and self-esteem among the many skills they develop. “It’s great to win a grand champion banner, but there’s only one champion at the fair. What they are taking out of this is what they learn — taking care of the pig or building a birdhouse. It’s not just building a project or raising an animal.”

Carroll County’s program, with more than 800 members in 35 community clubs, has by far the largest participation of any county in Maryland.

Driving the tractor enables Grayson to contribute to the family business. When a second tractor is needed at an adjacent farm, he follows his father aboard the second rig.

Grayson and Clayton, 15, represent the fourth generation working Dell’s Generation Farms on 1,1500 acres throughout Carroll County. The family owns nearly 650 acres, about one-third of which comprises woods, forests and pastures, and the rest of the farmland is rented from area landowners.

Clayton, like Grayson, started riding the smallest tractor, a lawn mower, and later “graduated to the big stuff.”

Starting at 6 or 7 years old, Clayton accompanied his father to feed and milk cows, back when the enterprise included dairy farming. He chopped silage, the corn used to feed the cows, and Matt bought him a child-size wheelbarrow to assist his efforts. Today, Clayton runs the grain cart during fall harvest and operates a large dual tractor to spread lime. It’s the first year he’s operating the equipment himself.

“I like running the tractor. I always have, since I was a little kid,” he says.

“That’s how it starts for you as a little kid,” says Matt, who recalls spending his youth working alongside his father, bottle-feeding calves, providing straw for bedding, mowing grass and weeding. He aspired to duplicate his father’s successful career. “It gets in your blood.”

Matt encourages his two sons to continue the family business, but he’s not pushing. He’s proud of the interest they show and allows them to do more than he did at their ages.

Clayton’s current goal is to drive a tractor-trailer to haul equipment along the East Coast, with an eventual move west to work on a combine crew that travels from farm to farm, state to state to provide custom farming services. Grayson expects to remain on the family farm.

“I want to be a farmer and work on tractors if they are broken,” he says. “My plan is to stay where my parents live.”

The Sellers family also represents multiple generations in the farming business. Josh Sellers, 35, remembers tagging along with his father and grandfather to the barn, and feeding calves on his own at age 10. Soon after, he became entranced by tractors and equipment.

“It was hard to get me to do anything else after that,” he says.

Josh has spent most of his lifetime with the family farm, Panora Acres. It’s all he’s ever known, and each day is different, he says.

Josh’s children, ages 4 and 6, are too young to plan their futures.

“I hope at least one stays around to keep everything going,” he says. At this point, they both enjoy riding the tractor, although they fall asleep after about 15 minutes. They also help with bedding for the cows, feeding the calves and milking the cows.

“They mention ‘when I grow up to be a farmer…’” says Stacy Sellers, 31, who grew up on her family’s dairy farm in Union Bridge. “We look for them to stay as long as we can stay.” 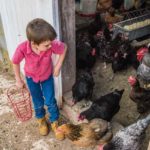 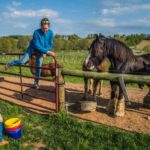 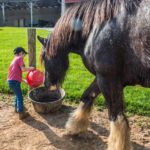 Grayson doles out supper for the giant Clydesdale, Clyde. 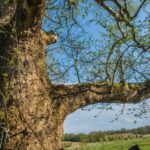 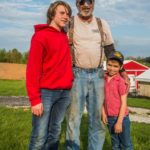 Francis Dell takes a break with grandsons Clayton and Grayson. 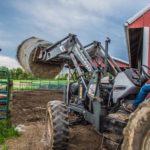 Grayson Dell keeps an eye on the load of hay as Clayton brings it in on the tractor. 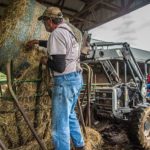 With the county’s expansive countryside, living on a farm is not the only way for children to experience and learn from agricultural endeavors. The area’s dozens of 4-H clubs give area youth access to agricultural activities that provide vital, transferrable life skills.

Lesa Ramsburg’s first exposure occurred at age 11 when she took horseback riding lessons in Manchester at High Ridge Farm. After a year, she joined the farm’s chapter of 4-H, a national youth development organization that promotes hands-on learning and education. 4-H programs include agricultural experiences including raising and breeding livestock and other animals. Ramsburg owns a goat, a dog and a rabbit, which she shows at competitions this year. She also leases horses for show, and she has shown goats and sheep for market in the past. The animals live at High Ridge Farm.

Today, Ramsburg, 18, is president of the High Ridge 4-H Club, has won hundreds of awards and prizes — including at national competitions out of state in her six years with 4-H, and has received several college scholarships based on her success in 4-H and interest in agriculture. She will depart for Ohio State University late this summer, where she will major in animal science and minor in agricultural communication. 4-H, she says, helped her get through high school and led her to her choice of major. Juggling activities and commitments helped her be better organized and able to take community college classes through the county’s dual enrollment program and complete an internship at a veterinary clinic.

“When I started 4-H, I was very young, shy, introverted,” she admits. “4-H has completely transferred who I am today. I have confidence I never would have built on my own and a set of skills I can take to the future.”

Eli Barber, 11, completes his sixth year in 4-H this summer. He’s built rockets and done woodworking projects; made public speeches; and shown cows, pigs, sheep, chickens, rabbits and turkeys. The small animals live on their 1-acre homesite in Westminster. The larger ones reside in their next-door neighbor’s barn. Eli’s earned first- and second-place awards at the fair and notched a reserves champion award for a lawn mower competition.

For the students, project assignments begin as early as October, and they work hard all year. Eli, for example, spends countless hours with his animals, halter-breaking, training, cleaning pens, feeding them, and coordinating veterinary care.

“You invest your money [for the animal], a ton of time, and nine months later, you get the payoff,” says Ashley Barber, Eli’s mother and leader of the Sam’s Creek 4-H Club. “It teaches them responsibility without instant gratification, patience, responsibility and integrity.”

Kids yield those skills and more through agricultural undertakings, through 4-H or living on a farm. Clayton Dell adds organizational skills, people skills and understanding the value of hard work to his accomplishments through farming.

“When I’m working, I’m earning money. I know the steps involved in getting the money,” he says about seeding, fertilizing, spraying, spreading manure, growing, combining and baling straw, for example. “I know the value of money. It will help me in the long run.” 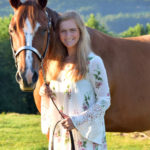 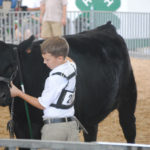 Eli Barber shows his steer, Rex, at the Carroll County Fair in 2017. Photo supplied by the Barber Family. 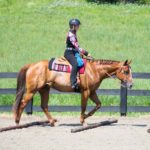 Lesa Ramsburg is the president of the High Ridge 4-H Club. Photo supplied by the Ramsburg Family.