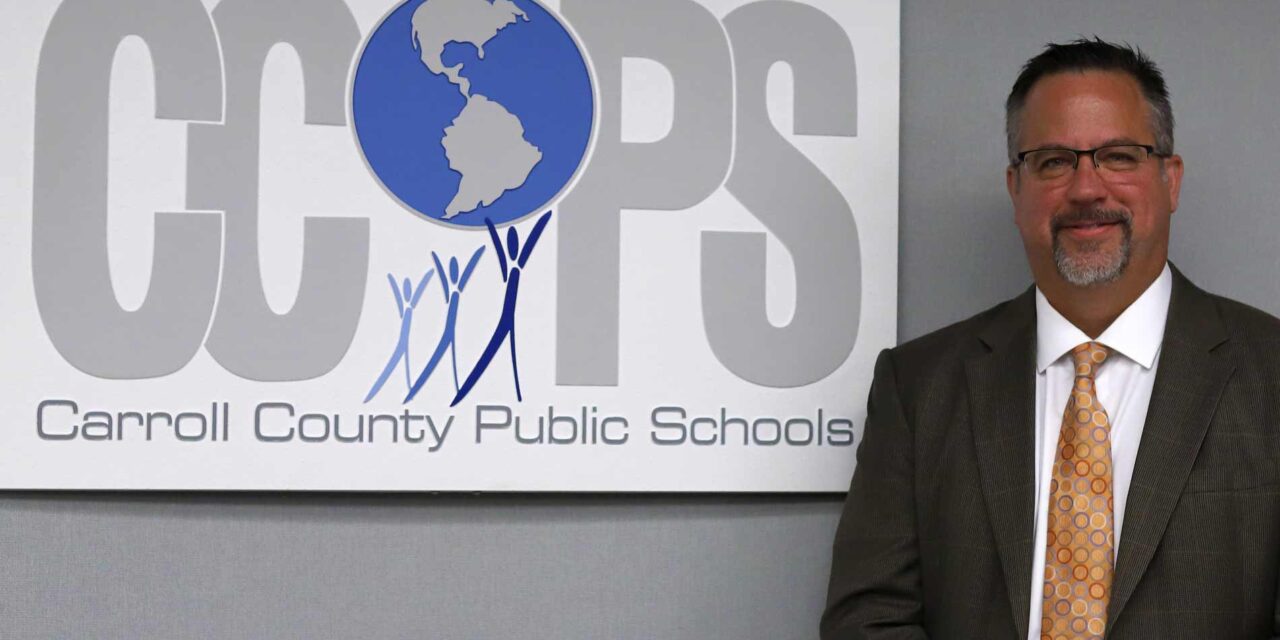 At the beginning of 2020, Carroll County public schools had a few Google Classrooms set up. The idea was that teachers would use the platform to get assignments to and communicate with students when they missed school. The school system was looking at building an instructional technology program over the course of two to three years.

And then the coronavirus pandemic came.

“No one, I don’t think, could say they were completely prepared to operate in this kind of situation,” said CCPS Superintendent Steven Lockard. “We’ve taken for granted that we’re going to see kids every day. … All of the things we’ve built and created have to be rethought, and that’s really challenging.”

The school system would end up setting up more than 26,000 Google Classrooms as the pandemic forced education online. It required the school system to retool in myriad ways — from lending out laptops to students to holding individual graduation ceremonies with a limited number of family members.

“I think we managed to do a whole lot in a really short amount of time to try to continue to be connected with our students,” Lockard said.

Parents, for the most part, agree. But as the 2020-2021 school year rolls around, a lot of uncertainty remains. How will parents juggle child care if students aren’t fully back in school? How will teachers and students establish rapport if they’re not meeting in person? How will social distancing and other health-related protocols affect in-person learning?

The challenge the school system faced this summer was planning for various possible scenarios for the coming school year.

Lockard’s plan, approved at a July 29 Carroll County Board of Education meeting, calls for schools to open the 2020-21 year with an all-virtual model. He hopes the school system can hold in-person opportunities for special education students and at the Carroll County Career and Technology Center.

His plan also calls for a full review of this decision no later than the Oct. 14 board meeting so the school system can pivot to a new plan if conditions allow.

“My main concern is getting everyone back in school, face-to-face, as soon possible because we know nothing we do can really replace that,” said Cindy McCabe, chief of schools for CCPS. 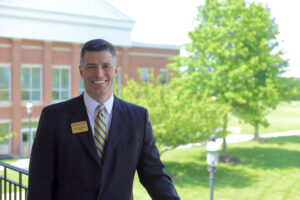 When schools in Maryland were initially closed, from March 16 through March 27, students were sent home with schoolwork, but officials anticipated seeing students in person again, according to Jason Anderson, chief of academics, equity and accountability at CCPS. By the second week of closures, teachers were being offered professional development for virtual teaching, and by the third week, Google Classrooms were up and running. Professional development would continue throughout the remainder of the school year.

Guidance counselors and school psychologists continued working with students they were meeting with before the pandemic.

For Carroll County’s Hispanic student population, Anderson and the ESOL (English for Speakers of Other Languages) team developed additional resources, and some school personnel drove to students’ homes to check on them.

Schools and parks around the county also became food distribution sites, where any child could get a free meal. Principals, teachers and other staff often worked the sites in order to see students in person.

Private schools in Carroll County similarly had to pivot, although with fewer students and more monetary resources, moving online was arguably an easier process. At Gerstell Academy in Finksburg, which has just over 400 students, the school was able to use an online portal launched several years ago through which students could get their assignments and additional resources. The school used Zoom for virtual teaching.

Gerstell Academy has plans that vary by age group for the upcoming school year. Each division will have in-person options and a full virtual option if students and their families choose. Start times for the different divisions will be staggered, and the school will have students fill out COVID symptom questionnaires before they arrive in school, and students’ temperatures will be checked before they enter buildings.

“We really believe strongly in having as many kids on campus as we can safely have and providing that in-person education,” said school President John Polasko.

At Carroll Christian Schools, Principal/Administrator Matthew Reisberg had already been discussing with his IT staff a plan for virtual learning prior to schools closing. While the plan was accelerated, teachers were already being prepared ahead of the closure, and virtual learning was up and running the Monday after schools had to close. Teachers taught classes during their regular times using Google Meet, and other Google programs were used for quizzes and tests.

Carroll Christian Schools, which had 310 students last year, has instituted a long list of protocols in order to have students safely learning in person this coming school year. Students will be able to learn virtually if they have health issues, at-risk family members or if they were exposed to the virus. 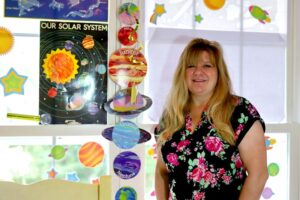 Erica McAndrew, a first-grade teacher at Spring Garden Elementary in Hampstead, and researched the best way to teach young kids online. She said for having 6-year-olds as students, it went amazingly well, largely thanks to supportive parents.

McAndrew split her class into two groups of 11 students that she met with each week, and if certain students weren’t able to get online at that time, she’d meet with them separately.

“My favorite thing about long-distance [learning] was totally my Google Meets with my kiddos. I pretty much lived for those because I could see their faces,” she said. “Sometimes on Friday nights I was meeting with some kiddos, but it was totally worth it … because you could see they were excited.”

She also volunteered to hand out lunches at the school so students knew they could see her there if they needed to.

McAndrew hatched chicks in her dining room and chronicled the process for the school system. That was capped it off with a “chick dance party” that included dancing the Chicken Dance. She helped create virtual field trips for students as well — they traveled to Mount Rushmore, the Liberty Bell, the Statue of Liberty, the zoo, the farm, the beach and landmarks in Carroll County such as Bear Branch Nature Center, Piney Run Park and Baugher’s Orchard.

Most importantly, the pandemic showed McAndrew just how much she loves her job.

“I love being with those kiddos every day,” she said. “I will not take anything for granted when I go back. The meltdowns, the excitement, the lost tooth. It’s so different, and although I think the kiddos were really successful, to be there would have been better.”

Christa Binns, who has two sons at Friendship Valley Elementary School in Westminster, said teachers and administrators were really good at communicating with and supporting parents and students. Her son Eli, who is going into fourth grade, had a teacher who would make videos for lessons and would share their screen to demonstrate how students could complete their schoolwork using tools in Google Classrooms. For Oliver, Binns’ kindergartner, it was a little different.

“So much of kindergarten is more social and emotional, and that’s really hard to do on the computer,” Binns said. 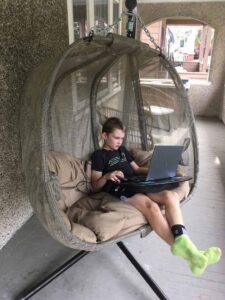 Lisa Daigle, whose kids attend Ebb Valley Elementary School in Manchester, was able to get day care for her kids since she’s an essential worker. Still, virtual learning wasn’t easy to navigate with Bear, who was in kindergarten, and Sophia, who was in third grade and in special education classes.

“All of March was absolute insanity trying to figure out how to log in, log out and get them into all their stuff,” she said. “I’ve never been so tired. … You’re being pulled in different directions.”

While she’s grateful her employer was flexible during this time, she’s apprehensive about what the fall is going to look like.

“I feel like in the fall, most employers aren’t going to be as lenient with some of us working from home as they were in March and April.”

For Kendra Heard, having four kids — ranging from sixth grade to a college freshman — she and her husband all trying to get work done was tough with their spotty internet service. They have a Westminster address, but live close to the Pennsylvania line. Only two people could be online at a time.

Heard saw her kids challenged by the limits of virtual learning, depending on the subject. Kate, who was in 10th grade, struggled with geometry. Jarrett, who was in sixth grade, had issues with chorus, having to sing and match pitch virtually.

She also worries about the social effects the pandemic had on her kids. All of their activities — from soccer tournaments to a junior firefighter program — were canceled. Some of the kids have had trouble keeping up with friends.

Overall, families were satisfied with the county’s plans and actions, according to a May survey that just over 6,500 families responded to. Most families thought the county’s learning plan was effective, and grading was fair and equitable. Most families were comfortable supporting their students with provided assignments, although 20 percent were only slightly comfortable and 8 percent were not comfortable. Nearly 98 percent of respondents had internet connectivity, and most respondents said it was easy to access online learning. 79 percent of students accessed online learning daily, and 74 percent said teachers were responsive to communication.

Looking to the coming school year, concerns remain about scheduling, establishing relationships between teachers and students, and other logistical challenges.

While there are plans to address some of these concerns — a summer recovery program for students who need to catch up, possible after-school programs in the fall and diagnostic testing to see where students stand on subject matter — Lockard acknowledges that no situation will be perfect.

“We can do everything. We can follow the guidelines, directions and requirements, but it’s not just as easy as saying ‘We’ll do that’ — there are implications of those choices,” Lockard said. “We recognize that anything that’s not this ‘return to normal,’ there are going to be challenges.”