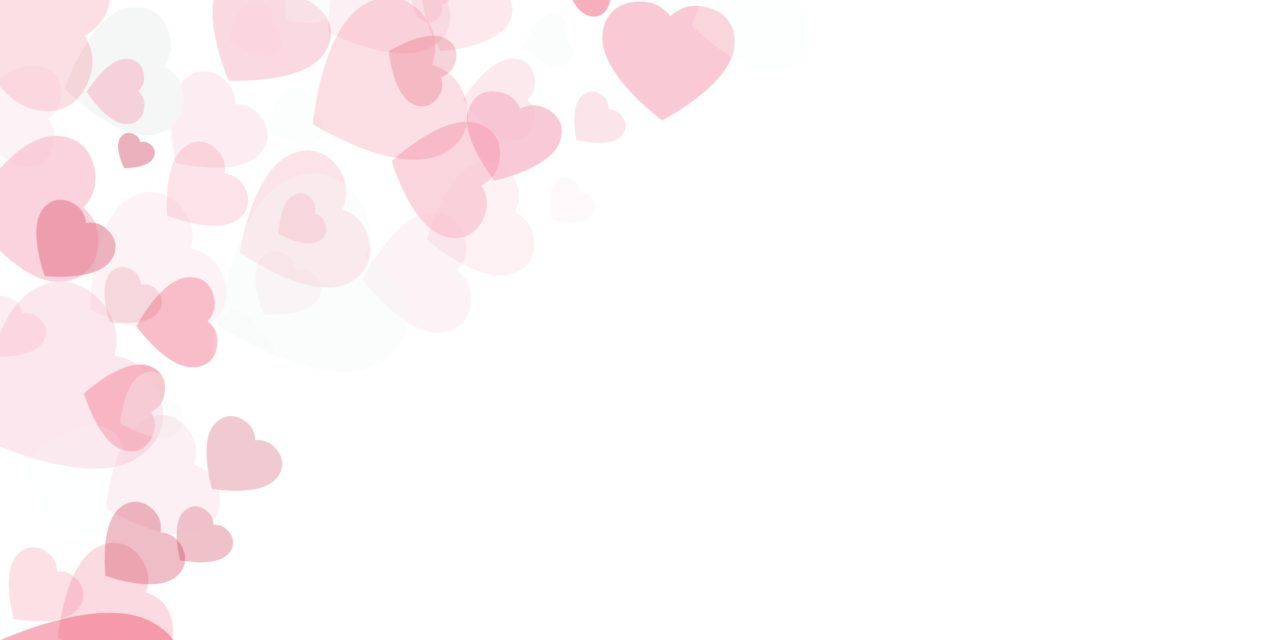 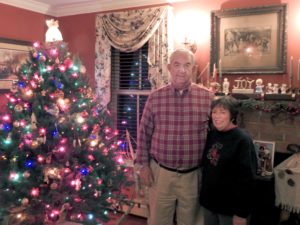 Carl and Pam Sherfey met on a blind date nearly 55 years ago. The chemistry was instant, and Carl told Pam they would marry one day.

Although she thought he was “crazy,” she noted his gentleness, sense of humor, caring nature and good looks. They enjoyed bowling, drive-in movies and horseback riding.

“We did almost anything we could,” recalls Carl, now 73.

Carl correctly predicted their future, and they married on a hot August day in 1968. Marriage didn’t stop their fun – they took up tennis and played just once, but enjoyed day trips, taking walks, ice skating, visiting family. It was just about being together.

By 1986, they were the proud parents of five children and running to Boy Scouts, Girl Scouts, soccer, baseball. They attended church every Sunday, and later Pam took over the Christian education program and even hired Carl as a teacher.

During the height of their running, Pam asked Carl when they could spend time together.

“I don’t know,” he answered. “I’ve never been married and never had kids before.”

There were days when they waved to each other as they passed by en route to games and events or doing their daily chores on their farm. Sometimes, they grabbed lunch in the pasture by the stream or jumped in the swimming pool when done.

“It worked out,” Carl says. “I wouldn’t change it for anything.”

Big dinners with the children and their friends felt like having their own community, Pam says.

“It built a closeness that we didn’t have to plan date night,” she says. “Every night is date night as long as we’re together. No matter what happens, we know we will be together.”

Although they are “empty nesters” today, it doesn’t seem that way as one of their children or grandchildren appear in the afternoon or on weekends, or they plan trips like their annual Thanksgiving at a plantation on the James River in Williamsburg housing 22 family members, or the weekend rentals of six cabooses (one for each family) in Lancaster twice each year.

They take trips on their own as well. While Carl, a wildlife photographer, admires the scenery on refugee trails, and Pam, two-time Environmental Teacher of the Year in Carroll County, explores nature, searching underneath puddles for the undiscovered.

The fire is still burning, Carl says, although they take more time to accomplish their pasttimes or split their travels into multiple days due to health challenges.

Pam is retired now and Carl still works full time in construction, but they make time to play card games and watch television and movies. If he’s immersed on the computer in the kitchen, Pam will sit beside him and talk or walk by and scratch his back. At bedtime, there’s always an “I love you” and time to “snuggle.”

“We’re still attracted to each other even after 49 years,” Carl says. “I never had a desire to go out with the guys and she’s not gone out with the girls. We’re best friends.” 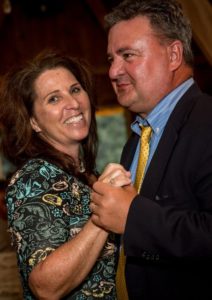 Lee and Tracie Sturgill also take trips out of town to keep their relationship strong. For many years, they would make it through tax season – Lee is a tax attorney – and jet off to Florida, California or drive to Williamsburg. Through the years, their children’s ages and social and recreational commitments determined how far they traveled and for how long. They, too, found themselves booked with baseball, soccer, lacrosse, swimming and religious education for their three children and used a color-coded calendar to keep it all straight, often needing the help of friends to get everyone where they needed to be.

“We were given advice early in our marriage to make sure we still go on dates,” says Tracie, who remains thankful to both sets of parents who took their children on Friday nights or weekends so they could have “getaway time.”

Private mediator and attorney Paul Capriolo, also suggests a date night, at least monthly, with a babysitter watching the children and the parents leaving the house for at least three hours. This maintains the connection between spouses while the children are growing.

“It works wonders,” he says.

Capriolo also recommends putting the spouse first throughout the marriage to avoid a loss of connection that often occurs while raising children.

“Once the children are grown and out of the house, they realize they don’t have a personal connection anymore,” he says. “Children will grow wings and move out and it’s just you and your spouse.”

As their children aged – all are in their 20s now – the Sturgills planned more excursions. They enjoy touring towns, historic parks and national parks. They celebrated 25 years of marriage in Hawaii, and this January they found themselves in Park City, Utah, in advance of tax season. They crossed the Pond to see London and the Baltimore Ravens play internationally for the first time this fall.

But for the Sturgills, like the Sherfeys, “happiness is our family,” Tracie says. The best times, they agree, are when their children spend time with them either at home in Westminster by the pool or at their beach house or on their boat. They still find their own time, Lee says, when they head to the beach for long weekends alone or in advance of the children, two of whom are married themselves.

Former college sweethearts, the Sturgills recently celebrated their 33rd anniversary, and they find themselves unconcerned about keeping their marriage kindled. Emotional journeys like Lee’s colon cancer five years ago and dealing with Tracie’s father’s illness kept them closer than ever.

“Sometimes when you go through something so emotional, that rekindles your love for each other,” says Tracie. “He really stepped up for me and I found a way to be strong for him. The fact that he survived it could break some people. For us, it made us stronger.”

One key, Lee says, is they always remember their friendship.

“Your spouse should be the first person you talk to about everything,” Tracie says. “It sounds so ordinary, but we just talk to each other.” The pair checks in daily at 11 a.m., and family chats with their children keep them all connected and close.

They bond over some of the same activities they enjoyed when they were dating and in their early marriage like skiing, going to Ravens games, and walking the dogs after work. Occasionally, they just hop in the car to drive to Gettysburg to get apples and stop for lunch.

“Spending time together like that, it’s a simple thing,” says Tracie. “But it gets you out of the house, away from the TV, with your spouse, talking.”

Although they considered downsizing their Westminster home, they say they never will, wanting to be an active part of their grandchildren’s lives. They will continue to swim and hike, perhaps pick up biking again, and help their children with their own children, together.

“I feel we are really lucky that we found the person we are able to love for this long,” says Tracie. “It’s a growing, changing love, but I still love this person.”

Reigniting the flame is similar to the way it was lit in the first place, says Alexandra Goerl Rickeman, LCMFT, marriage and family therapist in Westminster. Couples should remember what factors initially attracted them.

“I challenge people to think about how they acted and thought in the beginning years,” Rickeman says. “What did you do to fall in love?”

Rickeman suggests couples go back to the same activities and actions that kindled the fire in the first place like those below.

Physical
how you look, how you act in bed.

how you listen, how you feel together, your friendship.

how you think, sense of humor, deep conversations together.

Also, the way people treat each other plays a part. Thoughtful gestures, flirtations, and being fun and lighthearted also help to keep the relationship light and fresh. Sending notes, planning dates, making out and engaging in sexual behavior, even if it does not lead to sex, keeps married life from settling in, Rickeman says.

Participating together in activities – whether new or former shared activities – keeps the interest level high. This could be reading the same books or watching documentaries and discussing them or going to concerts, taking a martial arts class or traveling to a place never before explored together.

The point, she explains, is doing these things together. “There’s no reason why a long-term relationship couple can’t have a ton of fun, excitement, chemistry and great sex,” she says. “Expect to create the fun and make the fun.”

The natural challenges associated with age should not be a deterrent to sexual relations.

“I challenge people to see it not as dysfunction but a new challenge they can figure out together,” Rickeman says. “Turn the focus to the pleasure of the journey rather than the arrival at the destination.”

The therapist suggests taking the goodbye peck to a new level. Make it a one-minute-long French kiss instead, she says, not a “we’re married kiss but a “we’re lovers” kiss.

“You’re much more likely to have sexual thoughts during the day and come home more turned on and desirous of your partner than if you hadn’t shared that passionate kiss.”