Finding Security in the Familiar Face of a Hometown Officer 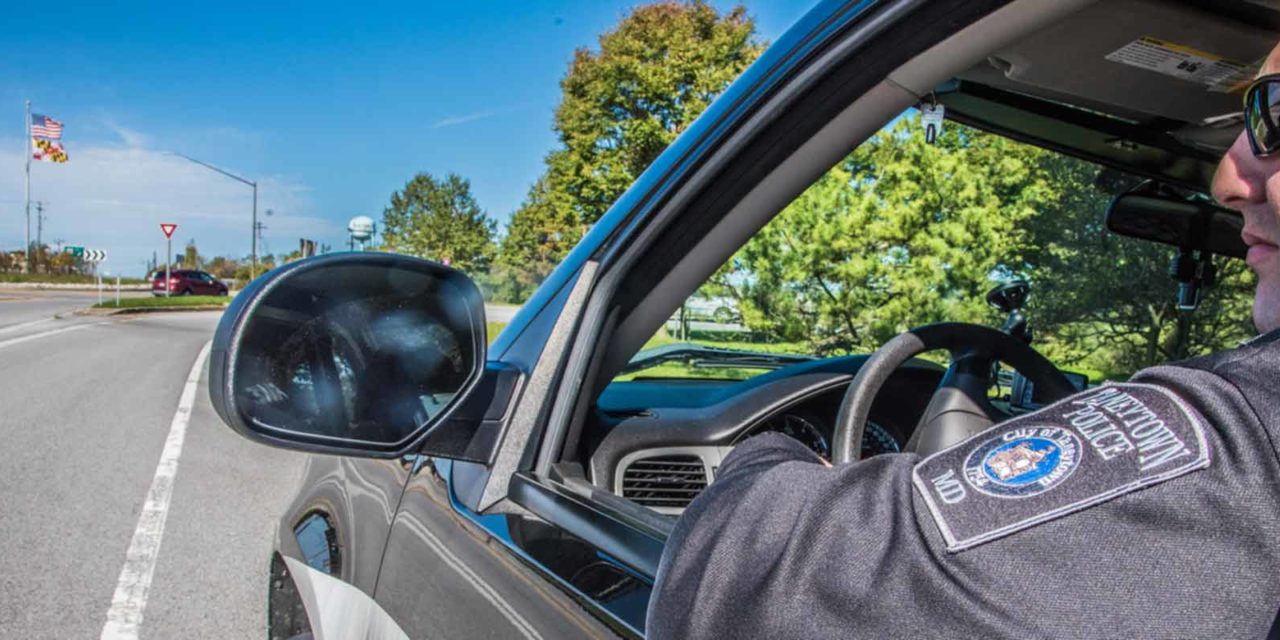 When the employees of Manchester Pharmacy thought there might be a gas leak in their store, they called 911. However, it wasn’t the Fire Department that first arrived on the scene but the Manchester police.

They were here in two or three minutes,” said John Gleespen, owner of the pharmacy. “They were already on the road while the Fire Department had to sound the alarm to get people in because they’re volunteers. The police were here to help, and luckily, it was nothing.”

While a municipal police force can cost a community a lot of money when residents are already supporting Carroll County deputies and Maryland State Police, having a police presence close at hand makes the expense worth it. Manchester has a six-officer force headed by Chief John Hess.

“It’s not uncommon for me to see the police in the parking lot when I’m closing,” Gleespen said. He points out that the officers aren’t there just to watch over him. The shopping center parking lot where the pharmacy is located is on Main Street, so the police can watch traffic and respond quickly to any calls. Seeing the officers there gives Gleespen peace of mind about his and his employees’ safety.

“Visibility is a big deterrent to crime,” said Chief William Tyler of the Taneytown police. His department includes 14 officers.

That visibility happens in many ways as local officers patrol the streets, visit local businesses and participate in local events.

“We get out and meet people and participate in community-oriented programs,” said Tyler.

County deputies and state troopers tend to have larger patrol areas that change from time to time, so those officers don’t become as familiar to residents.

Mary Jo Malone, owner of M.J.’s Cafe in Manchester, often has local police officers eat in her restaurant. She has come to know them on a first-name basis.

“They will eat lunch here sometimes or have a meeting between officers from different towns because we have a central location here,” Malone said.

Six Carroll County municipalities — Hampstead, Manchester, Mount Airy, Sykesville, Taneytown, and Westminster — have their own police forces. The newest of these is Mount Airy, which switched from using resident state troopers last year. The Resident Trooper Program enables municipalities to contract with the Maryland State Police to have a certain number of state troopers specifically assigned to their town. The municipality pays the costs and gets trained police officers with their equipment and vehicles. But for Mount Airy, maintaining adequate coverage of the town with only five troopers started to become an issue, and the cost was climbing.

“In [fiscal year] 2017, which was the last full year the town contracted with the state for the five resident troopers, the total cost was $937,000,” according to Mount Airy Police Chief Douglas Reitz. “The town was expecting to pay $1 million plus in the very near future as the cost would increase each year.”

The town established committees to study the pros and cons of making a change in the town’s police protection. After all options were considered, it was decided that starting its own police force was the best option for Mount Airy.

“The biggest reason was to have the town’s own community-based police force,” Reitz said. “With that, the town has direct input to the work the Police Department does and the programs that it implements. Not having any control, or a voice in how police services are provided, is one of the most cited reasons from municipalities that struggle with the decision to contract with a larger agency.”

Although Mount Airy had used the Resident Trooper Program for 40 years to provide local police protection, changes over the past few years convinced town officials that making a change would be better. Among other reasons, resident troopers weren’t remaining in town as long, which meant that they couldn’t develop strong relationships with the community.

Although not a municipality, Springfield Hospital Center in Sykesville also has seven sworn officers (the same number as the Sykesville police). This represents its own police force, which is larger than any other municipality’s force if both sworn and civilian officers are counted.

While there are additional costs involved with creating and running a municipal force, some of those costs are offset by the county and state. Carroll County provides money to municipalities to support public safety services, such as police, fire, and EMS. The governor’s office also offers State Aid for Police Protection (SAPP) grants.

Local policing leads to officers who both know and are known in their communities. “In a small municipality, as officers patrol, we develop lots of relationships,” said Tyler.

Those relationships make the policing more personal, and that personal touch becomes a form of police protection in itself. If police officers know who the troublemakers are, they can be on the lookout for them. Residents also learn to trust and open up to officers they become friends with about what is going on in the community.

“In a lot of ways, it’s a more intimate type of policing,” said Hampstead police Chief David Snyder. “You develop different relationships that are difficult for a larger agency.”

He should know. He came from the larger police force in Lower Merion Township, Pa., (estimated 2016 population of 58,288) near Philadelphia to work for Hampstead. One of the reasons for the change was that as be moved up the ranks in the Lower Merion Township police, he did less “retail policing.”

“I missed the basic interaction of a uniformed police officer, even if it was something as simple as helping an older lady put a 9-volt battery in her smoke detector,” Snyder said.

Don’t let the “feel good” side of local police work fool you, though. Municipal police forces in Carroll County have to deal with serious crime as well. According to the Maryland Uniform Crime Report, Hampstead police dealt with aggravated assaults, breaking and entering, larcency/theft, and motor vehicle theft in 2016.

For the most part, though, the municipalities with their own police forces see a lower crime rate than the county as a whole.

“Knock on wood, we haven’t seen a serious increase in crime,” Tyler said. Serious crime in Taneytown remained level between 2015 and 2016 (the two most recent years available), according to the Maryland Uniform Crime Report.

Municipal officers undergo the same basic academy training as larger police forces. In fact, most of the new officers recruited in Carroll County are trained at the police academy run by the sheriff’s department, alongside sheriff’s deputies.

“The standards we meet are all the same,” Snyder said.

Where the training differs is with the scenarios and classes for working officers. Each police force decides if the training is warranted. Different police forces may want to focus local training on issues specific to their communities.

While it’s doubtful that any agency would say it has all the money it would like in its budget, municipal forces seem to be the low man on the totem pole when police agencies are compared. In general, the smaller the municipality, the smaller the police force and budget. This often means that municipal forces can’t pay their officers as much as the county sheriff’s office or the state police.

Recruitment and retention of officers can be a problem under such restraints, but the local municipal forces seem to have a good mix of veteran and new officers. Tyler feels that it is because some officers want a place where they can put down roots. He started in Taneytown 25 years ago, moved out to Montana for a while, but then returned to work in Taneytown because he also wanted to live in the town.

The result of all the training and community work are police forces that serve and protect their communities. In return, the residents appreciate their police.

“This is a great community to work in,” Snyder said. “They are very supportive of the police. 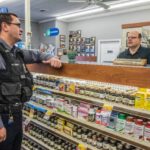 John Gleespen, owner of Manchester Pharmacy, chats with Pfc. Zeb Rohrback about the day when Rohrback and his partner responded to a possible gas leak at the pharmacy. 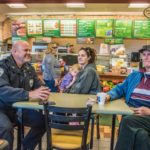 Officer Clint Thorn of the Hampstead Police Department cracks a joke with his friend Barney Cable, who holds back his laugh, at the Hampstead Jiffy Mart as Jessica Troutman and her daughter Bella look on. 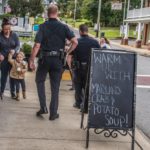 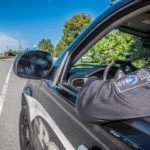 Cpl. Brian Shaffer of the Taneytown Police Department checks traffic through the Rt. 140 roundabout at the edge of town. 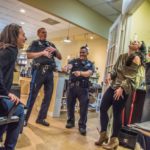 Pfc. Adam Long holds his stomach and does the “Adam Shuffle,” goofing off with his Mount Airy police partner Michael Ginevra and cracks up the ladies at George’s Girls jewelry store. From left are store owner Laura Puls, Ashley Day and Lisa Carnes. 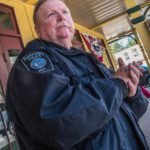 Chief William Tyler of the Taneytown Police Department says the local municipal forces seem to have a good mix of veteran and new officers since some officers want a place where they can put down roots. 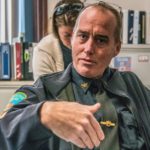 Chief David Snyder of the Hampstead Police Department. According to the Maryland Uniform Crime Report, Hampstead police dealt with aggravated assaults, breaking and entering, larceny-theft, and motor vehicle theft in 2016.