Getting Up to Grade 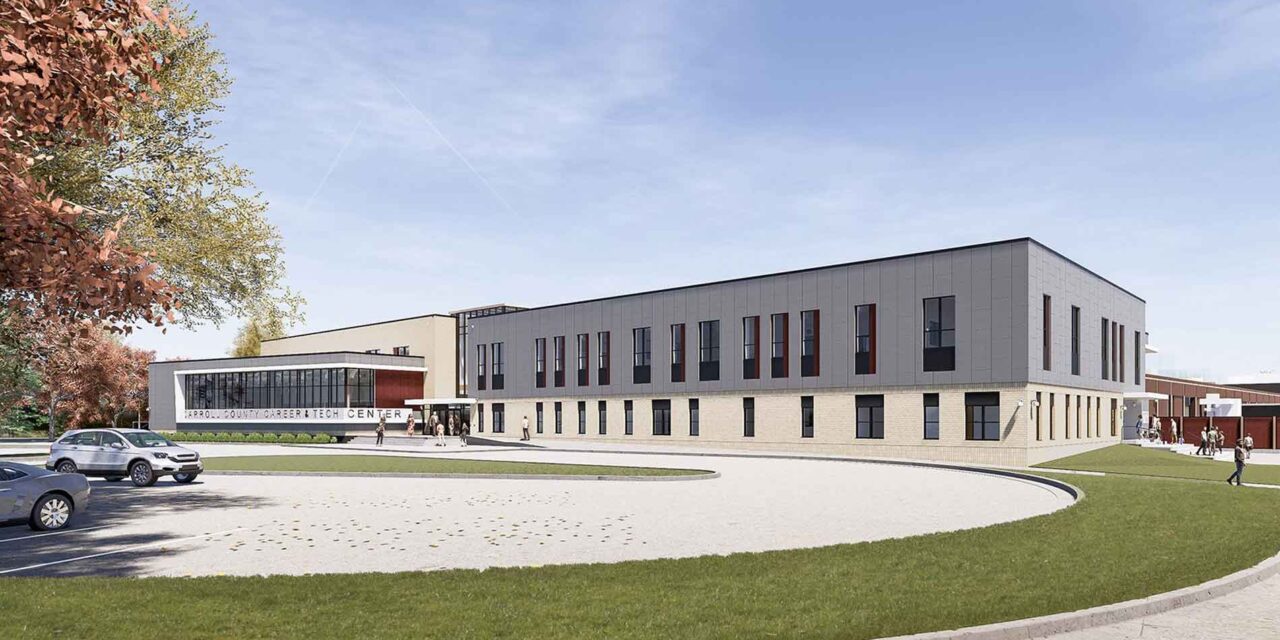 Like anything circa 1960s that is still expected to function successfully today, upgrades and improvements are not just niceties, they are necessities.

Such is the case with Carroll County Public Schools’ Career and Technology Center, which is currently undergoing a $67.6 million renovation and expansion. It’s scheduled to be completed in six phases — phases one and two, which include a front addition, are to be completed for this fall semester. Phases three through six are scheduled over the course of the next two years, with final completion of the project in summer 2024.

The project’s expansion component is a three-story addition at the north end of the building; two stories will match the existing building levels with a new third story above. The renovation part of the project includes improvements to security, safety, HVAC and accessibility, as well as equipment upgrades and operational improvements. 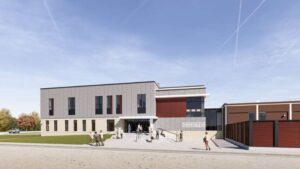 Raymond Prokop, director of facilities management for CCPS, explained that the project addresses space needs and provides improvements to an aging facility. Included in the project is construction of approximately 108,000 square feet of additional space, demolition of 23,500 of outdated square feet, and renovation of 83,000 square feet.

The design, which was based on input provided by county and school administrators and Career and Tech instructors, not only will address the needs of today’s students, but also will lay the foundation for career and vocational instruction of the future. Designed by architects from Hord Coplan Macht, construction is being completed by Gilbane Building Co.

“When the Tech Center was designed in the late 1960s, the scope and size of the education we are providing now was not imagined yet,” said William Eckles, a former principal and now supervisor of career and technical education at CCPS. “The first class at the ‘Vo-Tech’ was 325 students. This year, we had well over 1,000 students come through the building. Additionally, the infrastructure of the original building was not designed for modern technologies. For example, while the auto service program has been in place since the opening of the Tech Center, cars in the ’70s were not computerized like they are now. We now need to have computerized diagnostics available in each repair bay, but the original design did not have sufficient electrical capacity and certainly did not have network connectivity,” he continued. “The new construction was designed to alleviate both the size limitations and infrastructure upgrades.” 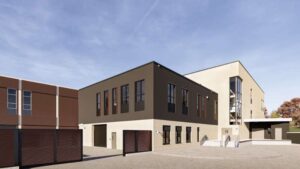 Similar constraints will be eliminated for all of the programs with the expansion and renovation. Eckles explained that some programs, such as the biomedical sciences, were located in spaces that weren’t designed for the work students are undertaking. “The new laboratory will allow for more complex experiments to be run and the students to gather more accurate data.”

He also pointed out that the project will alleviate overcrowding of certain spaces and programs. “In culinary arts, the professional cooking class shared a kitchen with the baking and pastry class. This required careful scheduling and sharing of equipment to ensure students could complete their recipes. In the new kitchen, there are zones designed for each class, allowing students to have sufficient room and ample equipment to complete their work.”

The three-story addition will feature an auto shop utilizing a large portion of the lowest floor. The main level, the site of a public entrance, will house cosmetology, culinary, fashion and similar programs that attract outside customers. On the second floor, health and allied services, print and video production, biomedical sciences and physical rehabilitation will have separate suites. The main entry will be shifted to the opposite side of the building, nearest to Westminster High School. There also will be some modifications to the bus loop and parking.

Teaching through the noise and upheaval of construction seems like a daunting challenge, but according to Career and Tech Principal Betsy Donovan, “It hasn’t been disruptive at all. Gilbane has been great to work with,” she said. “They have worked around the schedule of the school day and include CCPS in biweekly meetings.” 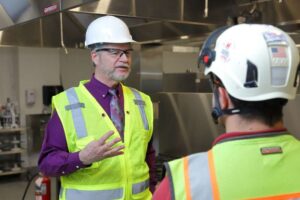 Donovan, who also taught at Westminster and Winters Mill high schools, served as academic facilitator at North Carroll and as assistant principal at Manchester Valley, explained that a few classrooms had to be moved into other spaces. In addition, “Two of the programs were housed in the portable classrooms outside Westminster High School,” she continued.

Any project of this scope and scale is bound to have changes and glitches along the way. Donovan confirmed that there have been minor changes. “For instance, we added student bathrooms in the cafeteria and an office for our financial secretary.”

Prokop concurred. “There are always changes to any project as it progresses, and there is a change-order process that is used to evaluate and approve those changes, large and small. There are various reasons for the changes — availability of materials, material cost escalation, change to curriculum, unforeseen conditions, weather impacts,” to name a few. “However, in general, the project plan, including budget, schedule, and concept, remain as approved by the Board of Education,” he said.

This is not the first time the Career and Tech Center has been revamped to meet the needs of students and their future career paths. Opened as a traditional vocational education facility in the 1970s, the Carroll County Vocational Technical Center, as it was called then, offered standard programs like masonry, carpentry and auto shop. The focus was on students whose plans, more often than not, included full-time employment right out of high school. Enrollment at the facility dropped to fewer than 300 students in the late ’80s and early ’90s and the program was dangerously close to being closed. 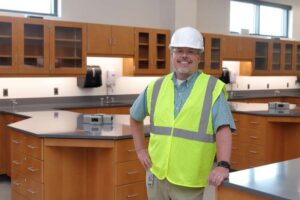 Under then-principal Eckles, the Vo Tech Center underwent a transformation, expanding the programs offered to better reflect the training and education needed for the job market of the 1990s. Subjects like biomedical sciences, engineering, computer programming and video production were added. The move revitalized the school and attracted a wider variety of students of all academic levels. Of course, carpentry, masonry and auto service can still be found under the Construction & Development and Transportation Technology clusters, respectively. The other six clusters include Arts, Media & Communication, Consumer Services & Hospitality, Health & Biosciences, Homeland Security, Information Technology, and Manufacturing, Engineering & Tech. And along with the new focus came the new name.

An addition was added to the original building in 1987. But with the new name, new focus and a new and larger pool of students who were interested in what the Career and Tech Center had to offer, the addition simply couldn’t accommodate the growth and changing needs of the programs for the long term.

The millions allotted to improving the facility’s physical space will be money well spent. In 2021, the four-year graduation rate for Career and Technology students was 99.2 percent and 85.6 percent had entered post-secondary education, full-time employment or the military within two quarters after their graduation. Additionally, 77.9 percent earned a recognized post-secondary credit while attending high school and 83.9 percent earned a recognized industry certification while in high school.

“Enrollment in Career and Technology education programs has grown steadily since the late 1990s,” Eckles said. “Students increasingly recognize the value of learning skills and earning certifications as they prepare for their careers.”

When the Career and Technology Center upgrades are completed in 2024, the facility will be better able to meet student’s instructional needs as well as the needs of an ever-changing education and job market.