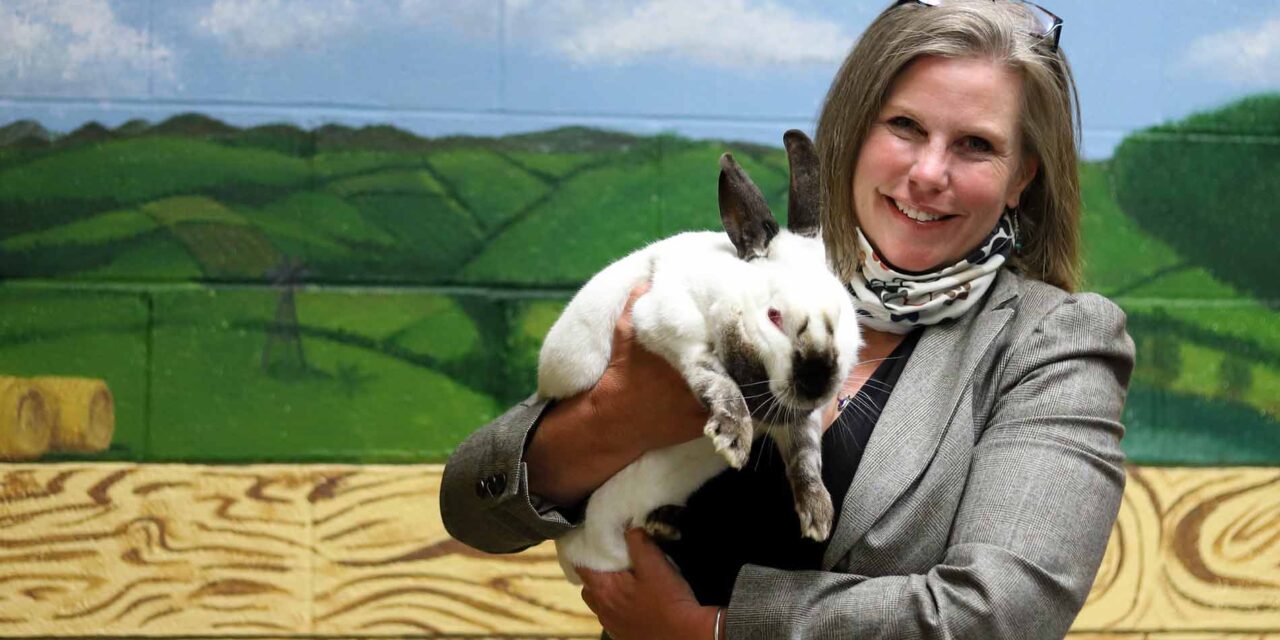 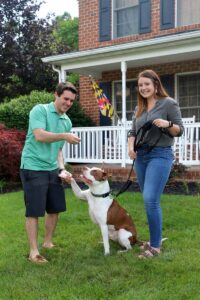 Alex Kratz and Hannah Long with their adopted dog, Forest.

While home during COVID-19, Hannah Long and Alex Kratz were grieving. Both had suffered the recent loss of their childhood pets: Long’s cat, which she had adopted during high school, and Kratz’s pit bull, who lovingly served as the family dog.

At the same time, the pair endured another loss — the postponement of their June 6 wedding and honeymoon.

They realized there was one way to cheer their spirits and find something good out of the bad of the coronavirus, which had them both working remotely — Long for a medical device company and Kratz for a NASA virtual team.

“We knew that the combination of the circumstances meant it was the perfect time to add to our family,” Long said.

They turned to a Facebook group led by the Humane Society of Carroll County and saw photos and videos of dogs in foster homes. They connected with one family and wore masks to visit a pit bull mix, playing with the dog in the backyard for a while. They emailed the Humane Society, completing the application and background check forms online. Once approved, they returned to the foster home to get Forest. Their only presence at the Humane Society location came at end of the process, when they picked up a gift bag of treats and toys left for them on a small table outside.

In March, when Gov. Larry Hogan mandated the shutdown of nonessential businesses, the Humane Society staff found themselves charged with thinking outside of their normal box. 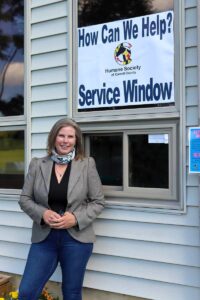 “When this initially hit, we sent everything we could into foster care,” said Karen Baker, executive director of the Humane Society of Carroll County, referring to all animals that could be adopted. Animals that were stray, needed temporary housing or part of an Animal Control case remained on-site. “If we allowed animals to come into the building at their normal pace, we would have filled up immediately and we would have had no way to get those animals back out.”

Staff set up additional Facebook pages and focused on lost and found groups, lending assistance in posting photos and videos, searching databases and connecting finders or owners with adoption groups. Many lost animals were reunited with their owners and others were adopted without ever “touching” the shelter building. Staff also offered resources and guidance to help owners keep their animals or foster animals during the search for a permanent home. For animals needing medical treatment, care and supplies were managed remotely through their foster families. “Supply drops” to the home or contact-less curbside treatment and pickup provided necessities.

Under normal circumstances, the county’s only shelter provides temporary housing for animals, whether stray, abandoned, abused, or owner surrendered following an eviction or change in residence. This spring, EMTs turned to the Humane Society when COVID-positive patients were transported from home to the hospital, leaving animals without care. These pets were housed at the shelter quarantine unit, with a separate ventilation system, and served by staff in shifts wearing personal protective equipment. The unit served six animals during the four months, all of whom returned home or were adopted elsewhere following a two-week stay. The unit remains available should other animals be stranded if their COVID-positive owner needs medical care outside the home.

From March 1 to June 15, the Humane Society accepted 178 cats and kittens from around the county, nearly 50 percent fewer than during the same time period in 2019, when the total number of cats and kittens from Carroll taken in was 358, including strays, feral cats and those surrendered by their owner. All cats received were sent into foster care after vetting and the three-day stray holding period expired, Baker said.

Amanda Holder fostered Wesley, a 5-year-old American shorthair who was rescued from a hoarding situation in March. Holder had seen posts online regarding the influx of animals left at shelters after their families were scared about COVID or they could not afford to care for them.

“I took it because I wanted to help them get animals out of the shelter so they could do a deep cleaning and provide a good home until COVID ended,” she said.

Wesley needed all of his teeth extracted and had severe ear infections. He was shy and hid in holes between cabinets. In mid-June, he was medically cleared, and after no adopters came forward, Holder decided.

“I think this adoption was so much more special during the world situation and helping an animal during it,” she said. “I’ve always had a really big place in my heart for cats, so it was nice to be able to foster one. It was inevitable that he would end up staying.”

The shelter received 37 fewer dogs and puppies from March 1 to June 15 this year. Thirty-eight dogs were returned to their owners, 17 were adopted, and 25 went to foster care.

According to Baker, by June 1, about 70 to 80 percent of the shelter’s fostered animals had been adopted, usually by the fostering family or their relative or friend, without needing to return to the shelter.

“We don’t handle that; that’s wildlife doing what wildlife does,” Baker said. “We only handle wildlife if it’s sick or injured or inside the living quarters of your home.”

The coronavirus also necessitated an emphasis on the safety of staff. The 14 full-time and six part-time staff members worked in staggered shifts on teams for consistency and safety. When the restrictions eased and the center reopened to the public, visits were accepted by appointment only, with social distancing restrictions. The center also opened a service window on the side of the building.

The greatest challenge during the altered state of operations, according to Baker, was money. The nonprofit shelter is funded through donations, with its county budget delineated only for Animal Control services, but the organization spends $150,000 a year on medical services alone. The organization holds several fundraising events each year, including the Kitten Shower, a spring baby shower for kittens that yields donations that accompany kittens to foster homes in the spring. The event provides the supplies needed for the kitten season, March through October, but was canceled this year. Also canceled was Woofstock, an outdoor festival with vendors, live music and games, with proceeds benefitting the medical fund for the spaying, neutering, vaccination and treatment of animals. Woofstock, held in mid- to late June, usually raises $20,000. The organization’s largest event, Tails at Twilight, raises $60,000 each December and is still scheduled for Dec. 12.

The Humane Society accepts monetary and food donations from individuals and organizations like the Greater Good, which delivered its second tractor trailer of food in early June. The food is available for community pickup and also is distributed to food pantries throughout the county to provide community members with food for their pets during times of crisis.

Other free and low-cost services were put on hold due to the pandemic, including a rabies vaccine clinic, microchipping, the Catknits knitting and crocheting club, and Critter Camp, where kids learn about the shelter, how to care for animals, and most importantly about kindness toward and compassion for animals.

The coronavirus helped animals find their forever homes through generous foster families, and gave new families more time for training. But when the virus subsides enough that life returns more to normal, what happens to the animals used to having their family members by their sides 24-7? Baker suggests separation be part of the training.

“Spend some time during the day away from the animal, like crate training, or giving the animal a place where they’re alone for a little while,” she suggests. “It’s also a great time to set a routine so that you’re feeding the pet before you would normally leave for work or when you would normally get home from work. So set that schedule like you would be out of the house.”

Forest, the pit bull, won’t have to worry about separation anxiety as Kratz works fully remotely and Long will return to her office just a few days each week. His owners have worked diligently on training since his May arrival. The playful 2-year-old enjoys thrice-daily walks and little periods of training time, when his owners take their work breaks. He’s blended in like he’s been there for years, especially the way he lovingly snuggles and cuddles.

“He really does bring out the best in us,” Long said. “I think we’ve already grown so much as people, whether it’s patience or the amount of love we have.”

Next June 26 at Belmont Manor House in Elkridge, when they recite their vows, Forest will be alongside them, representing the time when the coronavirus disrupted their plans but set the foundation for their family. 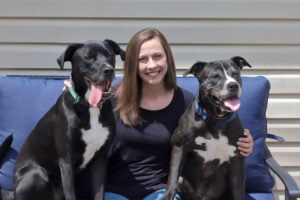 Megan Voland’s 2½-year-old Labrador mix, Porter, was playful and full of energy. Megan and her husband found it difficult to tire him out.

“Clearly he would be better with a playmate,” Megan said.

They had taken him to play with friends’ dogs and he fared well, spiking their interest in a second dog.

Megan actively followed animal rescue groups on Facebook, not purposely looking for another dog, but still perusing. She saw a friend’s post with a photo of a 7-year-old pit bull/lab mix she was fostering for the Humane Society of Carroll County, trying to find him a forever home.

They brought Stout home to Westminster on April 9, following what Megan said was an easy process that mostly involved emails and telephone calls as opposed to in-person meetings due to the coronavirus. They did meet the dog at a distance at the foster’s home and took him for a short walk.

“But it wasn’t like he was off leash anywhere, and we didn’t get to really play with him,” she said. “Because of COVID, the whole process of actually deciding that was the dog for us was definitely different. But I also felt like the process went a lot quicker because it was all over email or phone call.”

An educator who works from home, Megan had the time to train Stout and manage the two dogs and their interactions. And just as they had hoped, having Stout for a playmate calmed Porter.

If COVID hadn’t relegated Megan to working remotely, she admitted they would not have been able to add Stout to the family during the school year.

“It was important for me to be home with the two dogs to make sure they were going to get along, they weren’t stuck inside all day, and the training was consistent from the start,” she said. “We would have definitely waited [until summer] and Stout might not have been available.”

Megan will likely return to work outside the home in some capacity this fall. But she’s not concerned.

“I’ve had so much time with both dogs to work on training,” she said. “It was my biggest hesitation before getting a second dog. I just wanted to be here to make sure they got along and be sure Stout knew our commands. I feel confident they will be OK when I go back to work- although I may miss them even more. I’ve gotten used to spending everyday with them!”