In Taneytown: A Land of Fear 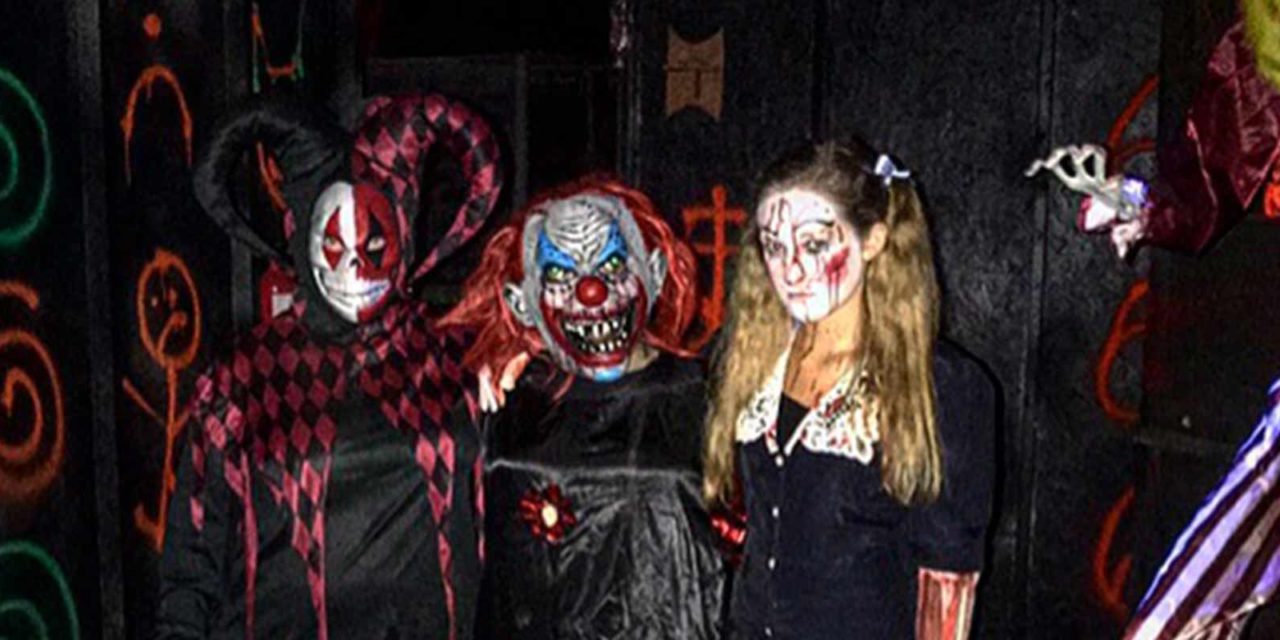 There’s nothing Greg Durkin enjoys more than a good scare. And not just your run-of-the-mill Boo!
from behind a bush. He wants the slow, creepy, unsettling, stalking-you-while-you-look-over-your-shoulder kind of scare.

“For me, it is all about the suspense of the scare,” he says.

And Durkin provides plenty of that at Land of Fear, which will be open for its second season weekends from Sept. 28 through Oct. 28. Located at the Paintball Adventure Park site in Taneytown, Land of Fear offers a 25- to 30-minute walk through such spine-tingling attractions as a cemetery, a haunted manor, a zombie village and — new this year — a “sinister carnival,” as Durkin puts it.

“These are the clowns that may not hand you a balloon,” says Durkin gleefully. Durkin conceived of and created Land of Fear with partner Rick Castro, who Durkin refers to as a “mega artist.” Durkin was raised in Parkville, where decorating for Halloween was somewhat of an unspoken competition among neighbors. “It was my favorite holiday,” he says.

By the time he became an adult, Durkin was going all-out to decorate his own home. But yard decorations and homemade haunted houses were not enough. Durkin wanted to take it to the next level.

“People want an escape,” he says. And Land of Fear’s Halloween-themed experience “is an opportunity to satisfy that need, fulfill my passion and see how good we can get at it.”

The attraction is centered around a “once-quaint little village in the countryside that has become overrun with strange characters who are aggressive and sinister,” says Durkin.

Durkin, who relies on the help of family and friends to create and run spooky village, enjoys playing the role of the mad scientist.

Not a big fan of “blood and gore,” Durkin says he prefers to create an adrenaline rush for visitors.

“Our goal is to take away that sense of security,” says Durkin. “And when that is removed, it means they have bought into the set, into the skit and into the character.”

And something more: “When you jump out and startle someone — that’s great,” he says. “But do not retract. Don’t back into where you came from. You need to follow it up and stay and invade their personal space, because that is what is going to get them creeped out.”

Those interested in a more up-close and personal experience are handed a glow stick to carry through the attraction.
“That lets us know you are OK with being harassed or touched appropriately,” says Durkin.

The attraction includes 40 or so volunteer actors. Characters include ghouls, zombies and demons and other spooky creatures. And the actors, such as Amanda Polanowski, do not take their roles lightly. To play a zombie, one must become the zombie (flesh-eating aside).

Polanowski, who performs frequently in community theater, researched zombies for her role, including watching clips of the popular TV series The Walking Dead. A teacher in her non-undead life, Polanowki studied the movement of the zombies, as well as the sounds they made. As a result, she soon learned that there is not one just sound a zombie makes, but several.

“There are hisses, growls, almost a roar, and groans. I’m a groaner,” she says. Polanowski also admits that she is not a huge horror fan. “I would never visit Land of Fear, but I love working it,” she says.

Polanowski, who is from Westminster and has performed in such plays as Beauty and the Beast and Sweeney Todd, says she adjusts her zombie role freely and enjoys doing so.

But Polanowski wants her zombie to be convincing. “If you’re expecting a scare, then we’re going to deliver it,” she says.

Durkin agrees. “We don’t just want characters that look the part,” says Durkin of the actors, many of whom remain in character even when not performing. “We want people who are immersed in that character.”

Not that looking the part isn’t important. While some performers, like Polanowski, do their own makeup, others rely on Lissa Davis. Davis, a long-time horror enthusiast, not only plays a voodoo priestess but offers her talents as a makeup artist as well. For Davis, who is from Sykesville, Land of Fear was love at first sight.

Davis originally started out just doing her own makeup. But soon her reputation grew among the cast.

“Everybody’s like, ‘Did you see what she did to her face?’” she says with a chuckle.

Her creations include a zombie arm of rotting flesh and a skeleton face. She also created her own priestess costume and is planning to make a voodoo doll costume for another character to add to her priestess persona. “I want to create a human voodoo doll — complete with pins sticking in it,” she says.

Davis is not the only one with big plans.

“I want this to be start of something huge,” Durkin says. He is hoping that the location will help. While many similar attractions are located out of state — “two hours away,” he says — Land of Fear offers a closer-to-home alternative right here in Carroll County.

And it appears to have gotten off to a promising start. Mark Strong, an attorney from Towson and a bit of a haunted attraction connoisseur, gives Land of Fear high marks for its scare-ability.
“They seemed to be perpetuating a mood and a theme, instead of just random scenarios or vignettes,” says Strong, who visited last year. “It was an ongoing experience. You are in it from start to finish before you breathe easier.”

That’s music, and probably of the eerie pipe organ kind, to Durkin’s ears.

“We don’t want to give anyone a heart attack, of course,” he says. “But we definitely want you to feel your heart pounding in your chest. We want to give you that good scare.”

In a slow, creepy, unsettling, stalking-you-while-you-look-over-your-shoulder kind of way, no doubt.

Land of Fear is at 3939 Old Taneytown Road, on the grounds of Paintball Adventure Park. Admission is $15. For more information visit www.landoffear.com.