It Belongs to All of Us 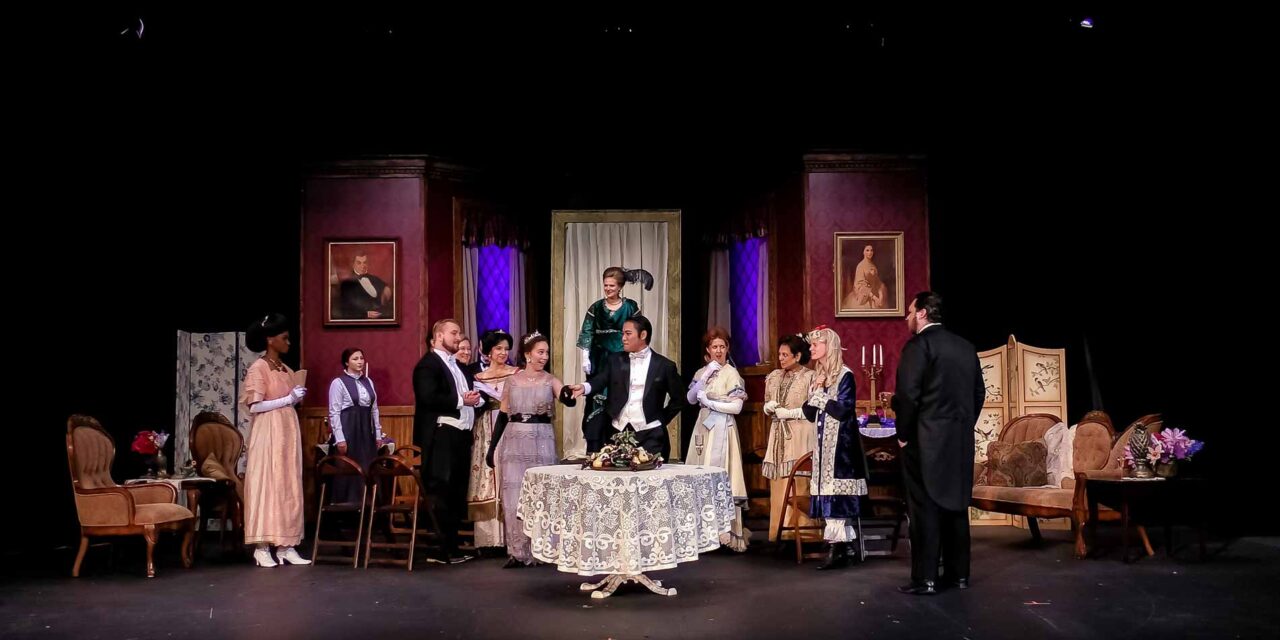 Sitting in a dark, empty theater on a hot July day, Garth Baxter was witnessing the realization of a decade-long dream. Rehearsals for his American opera Lily were underway on the stage before him.

“It is the defining moment of my career,” says Baxter, a longtime and highly regarded Carroll County composer.

Lily was inspired by Edith Wharton’s 1905 book The House of Mirth and focuses on a woman, Lily, born into high society at the turn of the 20th century, who makes devastating choices in her life. 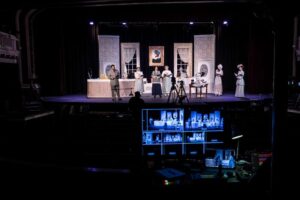 “The character is so interesting,” says soprano Katie Procell, who plays Lily.

“You see her thought process as to why she makes the terrible decisions that she makes.”

Procell added, “When I was playing her, was essentially in her shoes, some of her decisions made sense from her perspective. But then as an audience member you are going, ‘Why are you doing this?’”

The story or libretto for Lily was written by Lisa VanAuken, a former music student of Baxter’s at McDaniel College. VanAuken is also a novelist writing under the pseudonym Lisa VanAllen and whose books have appeared on the New York Times and USA Today bestseller lists.

A voracious reader himself, Baxter was intrigued by the story of The House of Mirth. “I thought this is just an opera waiting to be made,” says Baxter, whose other recent works include the recordings Ask the Moon for voice and piano, Katherine Unha Keem: Songs and Arias by Garth Baxter for voice and guitar, and Resistance, a recording of Baxter’s instrumental works. 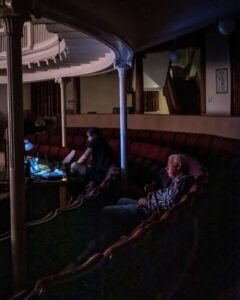 Even before Lily, Procell was familiar with Baxter’s music. In fact, the two were preparing for live performances of his chamber music when COVID-19 shut the effort down. During this time, Garth shared his opera with her. And Procell was impressed.

“He sent me the music and I thought this is something special,” says Procell, a professional singer from Baltimore who has been praised for her “arresting stage presence” by one composer.

With Stephen Strosnider, technical director and theater coordinator for McDaniel College’s Theater Arts Department, onboard as director, the magic of bringing Lily to the stage began. Albeit in a rather nontraditional way. Lily would not be performed for a live audience but would be filmed instead over several days. The score itself was recorded by the orchestra in 2½ days. The end product, which will be available this fall, will be published on YouTube for all to see.

“Lily belongs to everyone,” says Strosnider, of Lily’s 15-member orchestra and 15 singers and performers. “It belongs to all of us.”

Through YouTube, Lily will be going around the world and into the homes of those who might not consider themselves traditional opera fans as well as those who do. And all of it originates from Carroll County.

“It’s unique to have an opera composed in your own community,” says Lynn Griffith, executive director of the Carroll County Arts Council.

The Carroll County ties are strong. Baxter resides in Union Mills. The opera was filmed at McDaniel College’s WMC Alumni Hall and under the direction of Strosnider, who was born and raised in Carroll County and has experience as an actor, director, scenic designer and teacher. And Strosnider’s mother, Lora Strosnider, oversaw costume design for Lily. Furthermore, the project is supported by local businesses and funded in part by a Community Arts Development Grant from the Carroll County Arts Council as well as funded by the Maryland State Arts Council. 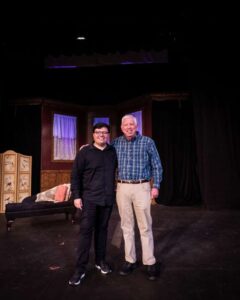 “I think there is more going on in the arts community in Carroll County than people realize,” says Griffith. “It’s a very vibrant community. There are so many people producing wonderful works of great quality.”

As a composer, Baxter, who describes his writing style as modern traditionalist, is a good example. His compositions for chorus, orchestra, symphonic band, piano, organ, flute, voice and guitar, as well as other instrumental combinations, have been performed throughout the world.

“He is a real asset to our community,” says Griffith. “You meet him, and he is very soft-spoken — and then you hear his music. It has a wonderful lyricism to it. I think that he is able to capture so many of our feelings as humans in his music.”

In regard to Lily with its stirring arias, Juliano Aniceto, the conductor for the opera, quite agrees. “It’s beautifully done, and you can hear the drama in the music,” says Aniceto, who has conducted the Baltimore Symphony Orchestra among others in the United States and South America.

“And it can rip your heart out,” adds Strosnider of the beauty and power of Baxter’s music. “When we were filming, there’s so many times I would look back at Garth and would be like, there it was.”

As an American opera, Lily is done in English and set in a more modern time. It’s not the typical image many may have of traditional opera, with its foreign languages and mythological or dated themes. “I think a lot of people think opera is an old dying art form, but it’s just the opposite,” says baritone Jeffrey Gates, who plays the villain, Gus, in Lily and whose accolades include being chosen as the overall winner at the Naftzger Young Artist Audition and the first male vocalist to do so since 1946. “It’s an art form that keeps evolving with the times.”

Lily is proof of that.

“This is still a book that people are reading,” says Procell. “This is a story that people are interested in. I feel that the way the story has been reconceived to fit the stage kind of works for the way that modern people think.”

The hope is that Lily will speak to an even broader audience through the opera’s placement on YouTube. Access to music and the arts, including opera, can change lives. Aniceto knows this all too well. He saw his first symphony performance at 18. “That’s when I decided to become a conductor,” he says.

He hopes a young person sitting at a computer might be inspired to do the same. “I think about those who don’t have a chance to be exposed to this art form, and now through social media, the internet, they will be able to do so,” he says. “And I think that is one of the most beautiful things about this production.”

It means a lot to Baxter as well. “Every piece I write is not just for this little circle of classical music fans,” says Baxter, who will have a new recording of his music released near the end of this year. “I would like my music to be heard by everyone.”

For those involved it has been a labor of love. And love not just for the production itself but for the man who created it. There is a great sense of loyalty to and admiration for Baxter among those who have been a part of Lily.

For example, Lily was Nicole Okundaye’s first opera performance, and she was grateful to Baxter for the chance. “I remember saying to some of the other performers, ‘I just really hope that Garth likes what we are doing,’” says Okundaye, who was part of the ensemble cast and is studying voice performance at UMBC. “They agreed.”

“He gave me this opportunity, so I wanted to do my best for him.”

She added: “I can’t wait for my family and friends to see it. I’m excited for everyone to see the hard work we put into it. But I’m mostly excited for Garth to see his dream come to life.”