It’s a Dog’s Life: Dog Parks Build Friendships and Communities for Dogs and Their Humans 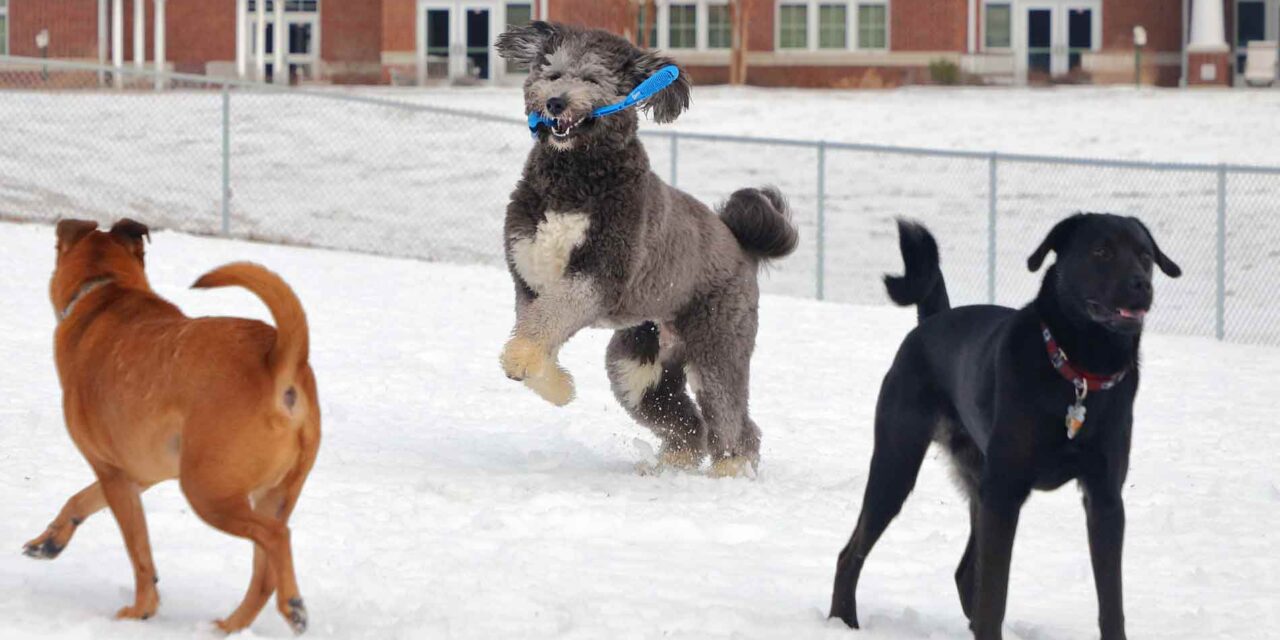 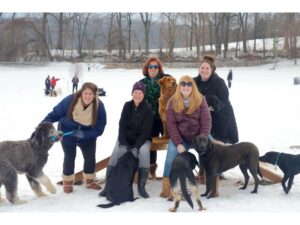 From across the park, they lock eyes. Both remain still, immersed in their connection. Then the gate opens, and they run to each other like long-lost loves.

It’s as if they have been apart for years instead of a day or two. Best friends Penny and Kylie greet each other with a loving sniff and a boisterous bark before running in tandem and rolling around in the grass. If they get too wild, “Sheriff” Barney chimes in to break them apart.

Penny is an 85-pound golden retriever, Kylie is a 158-pound mastiff, and Barney is a beagle with a personality much larger than his size. They enjoy playing at the South Carroll Dog Park, a 2-acre public dog park situated behind the South Carroll Senior Center in Eldersburg that opened a year ago. It’s a place for dogs to burn off steam, run around and make friends. But their owners say the friendships formed are not only by those on four legs.

“I’ve made a few friends going at the same time,” says Andrea Groslinger, owner of 2-year-old shepherd-hound mix Quinn and 5½-year-old black lab Margo. “We message each other when we’re going to go and set up dates for the dogs at the park and for ourselves outside of the park.” 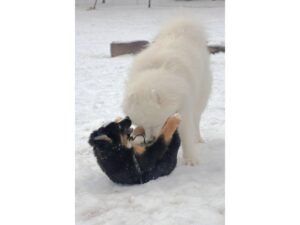 Groslinger, who takes her pups to the park three or four times a week, says that with the coronavirus, the park has provided needed socialization for the animals and also their humans.

“We stand outside in layers, and the dogs get exercise,” she says. “You get to talk to people who aren’t your family or [co-workers]. It’s just a great little community.”

Groslinger, 50, is one of about a dozen dog owners of various ages and backgrounds who have become a tight-knit group of friends. They go to brunch, bowling and out for drinks beyond their time together at the park. They also help out in emergencies.

When Kirsten Grauso’s car window was smashed while at the park, she was admittedly upset while she tried to contain Dudley, her 82-pound Pyredoodle (a Pyrenees/poodle mix), and determine what to do. Noreen Brown stayed by her side and spoke with the police officer on her behalf. Brown put Dudley in her own car, along with her Penny, and followed Grauso home. She also helped put a trash bag on Grauso’s car window until she could have it fixed. 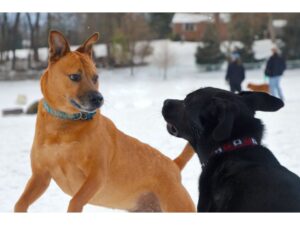 “I’m so grateful I made friendships at the park that have carried into my personal life,” says Grauso, 28. “I never would have met these people if we didn’t go to the park.”

The South Carroll Dog Park is one of three public dog parks in the county, and all are open 365 days a year during daylight hours. South Carroll and the Bennett Cerf Dog Park, a 1-acre park which opened in 2013 in Westminster, off Route 27 near Random House, provide fenced areas for smaller dogs under 30 pounds in addition to a larger area open to all dogs. Both are operated in partnership with the Carroll County Recreation and Parks Department. According to director Jeff Degitz, the department provided a portion of the funding for both parks through a matching Self-Help Grant, which supplemented funds raised by the communities themselves to cover items such as fencing, concrete, benches, trees and landscaping, water fountains and park features like tires and ramps. South Carroll members, led by Kathy Martin, are in the process of raising additional funds for a shade structure with seating to provide relief during the summer heat. Bennett Cerf has a new board running its operations, which is rebranding the park and reinvigorating fundraising efforts.

“It’s a community partnership from the ground level on up,” Degitz says. “Not only does that help with limiting the amount of government funds that are needed for it, but it really builds that sense of ownership from the community. Not only do they help build it, they help take care of it. They have a vested interest in it.” 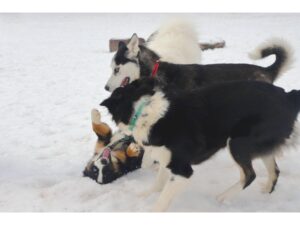 “I have always been, besides just a dog lover, a dog owner my entire life,” he says. “One of the initial actions I took was to better understand the resources it would take to build a dog park. … We used, for the first time, money or funds that were never used for these types of projects, that were typically used for rec councils.”

For admittance, both county parks require pre-registration with proof of vaccinations and a paid membership. The fee is $30 per year for the first two dogs in the household, with a $5 fee for each additional dog. To join both parks, the annual fees are $50 for the first two dogs and $5 for each additional dog. In 2020, Bennett Cerf had 175 members on its rolls and South Carroll had more than 355. Both have active Facebook pages. The Mount Airy Dog Park, located within Watkins Park on Center Street, removed its registration and fee requirement in 2019 when the adjacent skate park closed for safety reasons.

“The community that you can make, the friends that you can make and with the dogs themselves, dogs don’t always have the opportunity to be social,” says Gina Campanile, director of community development for the Town of Mt. Airy. “Especially if they’re young and exposed to other dogs, they have a greater chance of being dog-friendly dogs. But it’s really another way to provide a healthy outlet for our community.”

Focusing on their pets’ health is one reason owners frequent the dog parks. Some dogs, without access to a yard, need the space to run; others need the socialization of being around other dogs. Some come every day, while others just on weekends.

“The thing that makes my heart leap is watching two dogs or three dogs who are running at top speed alongside one another all the way around this 2-acre park,” says Martin, who takes her 4-year-old black lab Rosie to the park four times a week. “You can just see the joy in their body language and the complete exhaustion that follows when they’re home and just so satisfied.”

LiLi Taylor, 59, secretary of the Bennett Cerf Dog Park volunteer advisory council, relishes the park’s loose and informal atmosphere, where she’s made many dear friends. They sit on a bench, watch their dogs play and “shoot the breeze.”

“It’s a very simpatico place,” says Taylor, owner of Vance, a golden retriever, and Maya, a terrier mix. “It’s one of the few places where you can just go and you’re unified with everyone else there by the fact that you all love dogs.”

Steve Power, who takes 3-year-old mix Chester to Bennett Cerf, echoes the sentiment. “The dogs enjoy a social time but so do the owners,” he says. “It is so easy to share the latest ups and downs of ownership and life in general. With a world lost in confusion, the park is an easy place to relax with friends who also love their dogs.”

Rothstein takes his rescue, Kali, to the South Carroll Park, as a way for both of them to escape the trials and tribulations of the pandemic.

“It’s an escape to someplace where you’re with people with common interests,” he notes. “There is every shape and size of dog that you can imagine from a Heinz 57 to purebred, beautiful malamutes and Danes. And the best part is the animals know how to treat each other better than people. The animals don’t hold grudges, they sometimes get a little snarly with each other, but then they get their distance. And without any intervention from us, they find their own space. And the animals just seem to really enjoy each other’s company.”