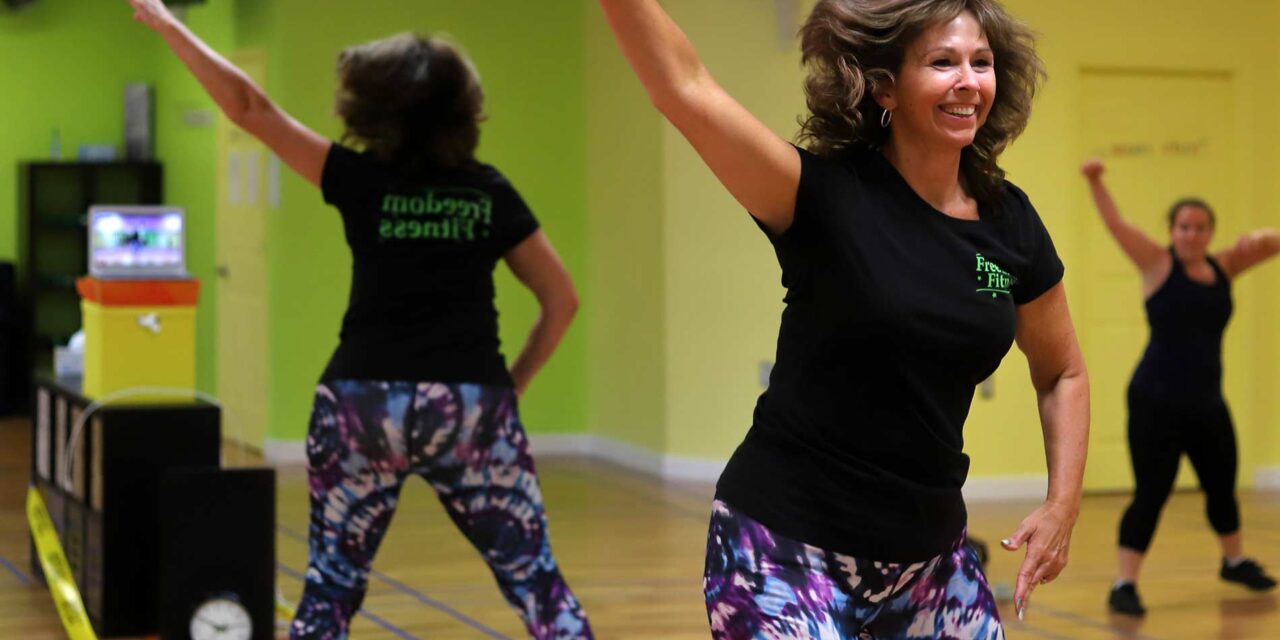 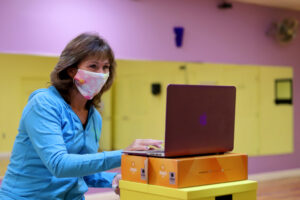 Tracy Cox holds a virtual exercise class for members and sets up her computer for the Zoom class.

When Gov. Larry Hogan issued an executive order in March shutting down nonessential businesses because of the fears of COVID-19 spreading, Tracy Cox, owner of Freedom Fitness in Eldersburg, was vacationing in Florida.

The news was devastating. Freedom Fitness instructors taught group fitness classes, and they had worked to build a sense of community and friendship among the members. Now they couldn’t meet, and Cox and the instructors had no way to earn a living.

Stuck in the Sunshine State, Cox conferred with her employees via phone, and they jumped into action with a plan.

“We closed on March 16, and my instructors were in the studio checking out aerobic steps and other equipment, and we were up and running the next day,” Cox said.

While she makes it sound easy, the shift to an entirely new way of teaching required her and her staff learning to use Zoom video conferencing overnight. Then there were email addresses that needed to be collected so invitations could be sent electronically to all the fitness studio’s members.

Instructor set up space in their homes where they could broadcast their class routines alone in their house while students watched and followed along in their homes. Even Tracy taught classes while she enjoyed the sun and warmth of Florida. 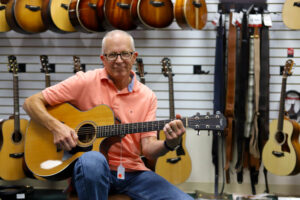 The COVID-19 shutdowns caught everyone flat-footed, and businesses were forced to adapt to whatever restrictions government forced on them or close down completely. Many businesses, like Freedom Fitness, retreated from the real world and expanded into the ether as they quickly grew their electronic presence.

At Coffey Music in Westminster, dozens of music instructors suddenly had no way to teach music to hundreds of students. Owner Bob Coffey and his staff worked to restructure how they do business. It took about two weeks.

The easiest thing to do was increase the number of instruments they were selling online on eBay and Reverb. Coffey Music already had a presence on those sites, so it was just a matter of increasing the number of listings.

The second thing was trickier, which is why it took two weeks to complete. The teachers were offered a chance to teach their students using virtual lessons. That way, students could play their instruments in their homes while the instructors listened in their homes. The instructors first needed to be taught how to use the program and how they would have to direct their students so, for instance, the computer camera could capture the finger work.

“We’ve been fairly busy,” store manager David Motter said. “The virtual teaching is up to the teacher. It depends on how comfortable they are with it, and how well they can teach their instrument virtually.”

According to Motter, about 90 percent of their teachers are now offering virtual instruction. 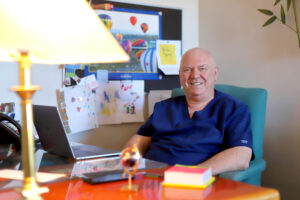 Gary Imm with All Smiles Care in Westminster was faced with a difficult challenge when the COVID shutdowns were imposed: In order to continue helping his patients, his work required him to get close to them to look in their mouths. His practice started offering virtual visits.

The virtual visits can’t replace a face-to-face visit, but it starts the process and gives the doctor an indication if there is a problem on the horizon. Imm speaks with patients and has them use their smartphones to show the inside of their mouths.

It has been useful, too. Patients have put off dental care for fear of being so close to the dentist or hygienist, and small problems have become painful ones.

“I have seen more dental infections in the past two months than I have in 25 years,” Imm said. “They have been so focused on COVID that they didn’t pay attention to their dental health.”

While the patient may still need to schedule an appointment to come into the office, often Imm can prescribe a treatment to mitigate the urgency. This gives the patient time to see whether COVID continues to be a worry.

He has even been seeing new patients who want a safe way to visit the dentist while not having to come into the office.

These internet solutions haven’t replaced all of the income local businesses have lost during the months they were forced to keep their doors closed. However, they have softened the blow by allowing businesses to continue operating.

While federal and state programs were available to help businesses, the programs weren’t funded well enough to help everyone. Just as many workers were frustrated by an unemployment system that kept them waiting for both services and their money, business loans and grants have been slow in coming and may be too late for some businesses. Businesses were already frustrated by April — just a month into the shutdown, and for some the frustration continues. A National Small Business Association Survey found only 5 percent of small businesses that had applied for an Economic Injury Disaster Loan from the Small Business Administration had received any money by April, and only 25 percent had received a Paycheck Protection Program loan.

The same study showed how concerned business owners were at the onset of closures:

Ninety-two percent of small-business owners said they were very concerned about the economic impact of COVID-19.

In March, 49 percent of small-business owners said they had seen a business drop-off from COVID-19, and that percentage increased to 80 by April.

Almost half of small businesses were not confident that they would continue to operate.

Businesses have had to be innovative in searching for ways to continue operating.

While many places are using the internet to replace face-to-face, E.W. Beck’s Restaurant in Sykesville used it to streamline their operation. Rather than have a phone line and an employee tied up taking an order, which takes a few minutes to complete, E.W. Beck’s integrated online ordering into their website. This keeps the phone lines open and allows employees to concentrate on preparing orders and having them ready for customers.

“The longest part was inputting all of the menu, but the customers have jumped right on it,” said Scott Beck, owner of E.W. Beck’s.

When the state allowed restaurants to seat customers once again in late May, E.W. Beck’s added a waiting list for reservations. This decreased customer wait time, and it also kept the lobby from getting so crowded that customers couldn’t social distance. This became extremely useful when indoor dining was allowed in June.

“It’s much easier for the customer, and simpler,” Beck said.

He said the changes have allowed the restaurant “to hold its own right now.”

Steve Moore of Run Moore Shoes in Westminster has a website where you can order shoes online and make appointments for fittings. Before coronavirus, it was a part of business, but not a major part. That all changed when he had to close his doors to the public. It took him about five days to start offering virtual fittings to his customers and expanding his product offerings. The virtual fittings use Zoom and email to collect information about a customer’s feet. Moore can watch them walk, have them email pictures of the shoes they want, measure their feet, and ask questions. He can also direct them to various YouTube videos about shoes.

For Imm, virtual visits weren’t something new created to deal with the shutdowns, but it did lead to him and his staff finding ways to use it effectively.

“It’s not brand-new, but there hasn’t been as much a need for it until now,” said Imm. “They have allowed us to build relationship and maintain a connection with our patients.”

The visits have also reduced the demand of patients to come into the office so it is easier to maintain social distancing.

The businesses that have been able to adapt stand the best chance staying in business through this unusual downturn.

If something good can be said of the confusion and hardship caused by COVID and government restrictions, it’s that many businesses were forced to innovate and found those innovations beneficial enough to continue using them as things move back towards normalcy.

And while virtual music instruction remains an option for instructors who still don’t feel safe returning to teaching in person, Motter said that Coffey Music will move its lessons back into the store’s music rooms “whenever the CDC says you can get back into a room.” In the short term, virtual lessons allow music instruction to continue, but they don’t generate revenue for the store. The business sees its revenue from in-store lessons.

Meanwhile, Imm said he will also continue offering his patients virtual exams as an option because he has found a virtual exam offers some patients a better experience.

Cox has totally reversed her feelings about virtual teaching.

“I never wanted to do virtual teaching,” she said. “It seemed sterile, and I like the community aspect we have in our classes.”

Cox readily admits now that while she was forced into virtual teaching, it has worked. “It’s the same experience but different, and it has helped me and a lot of our people get through this shutdown,” she said.

Although fitness studios reopened on June 19, she continues offering virtual classes and even plans on adding recorded classes so members can work out at a time that might better suit them.

The virus forced businesses to move outside their comfort zone to survive, but those innovations are now part of their standard offerings and leave them better prepared to face future problems.