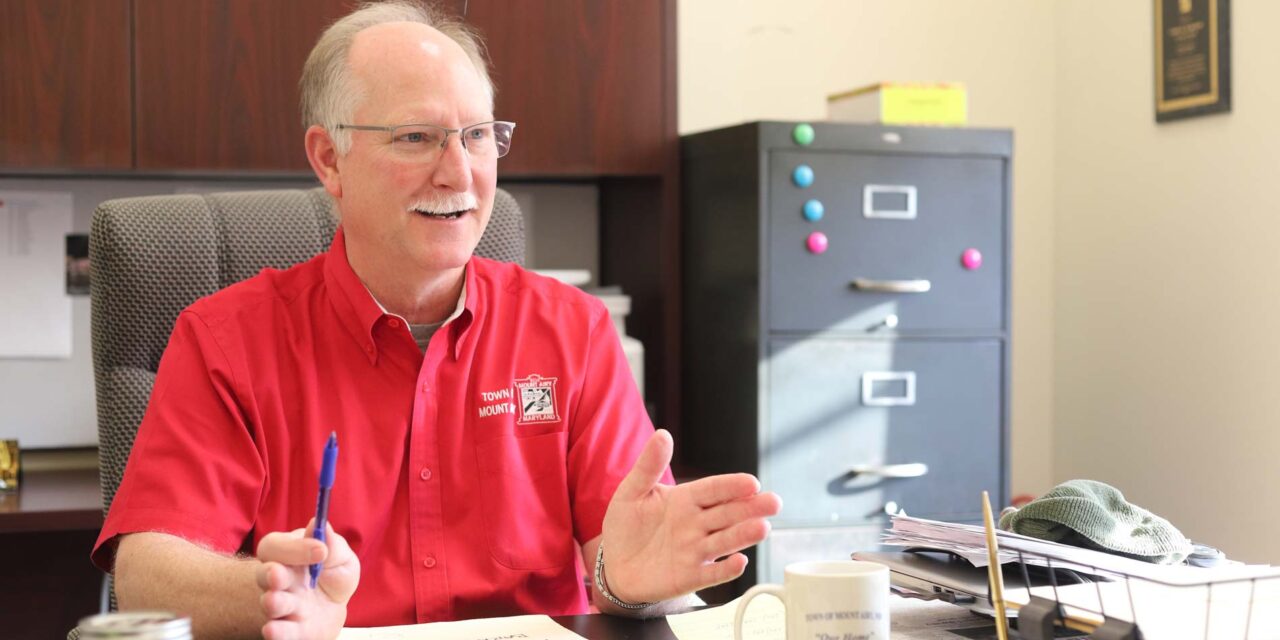 Larry Hushour grew up in a small Texas town with one traffic light and went on to marry his wife, Mary, and raise two children; serve in the U.S. Navy for 20 years; and work as an airline pilot. In 2000, the Hushour family settled in Mount Airy and Larry gradually became “immersed in all things Mount Airy” — including local government. The town was dealt a devastating blow in August when Mayor Patrick Rockinberg, who served in the position for more than 10 years, passed away from complications of cancer. In a November special election, Hushour was elected to serve out the remaining mayoral term. He takes charge at a time when running a small town presents many challenges, but Hushour is optimistic, saying his degree in economics will serve him well, and that he is inspired by the perseverance and resilience of the folks who live and work in the town and are committed to its success.

Mayor Patrick Rockinberg passed away in August, leading to the special election in which you were elected the new mayor. What was Mayor Rockinberg like to work with, and what kind of feelings come with picking up where he left off?

I am honored the citizens of Mount Airy elected me to finish out this term as mayor. I’d say in the vast majority of Pat’s political life, we were side by side on almost every issue. On the rare occasion we disagreed, it was always amicable and respectful. My memories are all good of events, hobbies and joint projects such as Rails to Trails and Mackenzie the Caboose. When we did disagree, Pat would say, “We’ll have to agree to disagree,” and I knew the conversation was over and moved on with a handshake and no hard feelings.

What brought you to Mount Airy?

Mary is a native Marylander, born on the Eastern Shore. As a new airline pilot, in an environment requiring a lot of time away from home, it was natural we would return somewhere near her family. We had a friend living in Mount Airy who offered to show us around the area. Once we got a feel for the communities and the schools, we pretty much knew we would love it here!

You served on the Town Council for four years (president for two of them) and have run for mayor in the past. What is it about Mount Airy that makes you want to serve in a leadership role?

I have to admit, I was a complainer for my first couple of years in Maryland, mainly due to state taxes. The culmination of such tantrums usually ended with Mary saying, “Why don’t you do something about it?” So, when an annexation was approved that many people felt was not in the best interest of the town, I became involved in the referendum process. This led to a familiarity with local government and the joining of the Board of Parks and Recreation. Our kids were in Scouts as well, and that sparked the need to learn more about the history of the town. In a perfect storm, I became immersed in all things Mount Airy. I am fascinated by the history, heritage and people of our town. Our local service clubs are outstanding, and volunteers work hard to preserve and enhance our town. It is my greatest hope that my time as mayor will not only keep the day-to-day operations going, but facilitate, enable and inspire citizens to continue taking pride in our town and helping to keep Mount Airy a wonderful place in which to live.

What are some of the most important things for you to accomplish as mayor? What are some priorities as you move forward?

I ran on controlling growth to the best extent possible. We have definite challenges since we have basically stayed stagnant for about a decade. But we know that some development needs to occur to stay viable in the coming years without raising taxes. In 2021, it became apparent we were about to open the floodgates on many major projects in a relatively short time. My objective is to make sure we grow at a reasonable pace and amount that protects our town from becoming the very communities we chose to abandon when we moved to our new home. As well, our long-term residents deserve to know that the town government is working to protect, preserve, uncover and restore the history and heritage of Mount Airy. There is a lot of pride in our town. I want it to stay that way.

Your term as mayor began in November, so while you’re still somewhat new to the position, what are some challenges of leading a small town?

Of course the pandemic is wreaking havoc on every municipality in Maryland. That is a constant issue requiring weekly, if not daily, re-evaluation. And being elected in November is not the best time of year for easing into office. Dozens of events occur in November and December. I was fortunate in keeping up with town and county issues from the time I left office in May until the November election. So even though it felt like a firehose of meetings, events and other functions, thanks to a great staff and superb commissions, Mount Airy managed to successfully navigate through some extremely busy months.

Our challenges ahead will be continuing to monitor the COVID-19 situation and disseminating information to the citizens of the town. We recently lost our local paper and have to be creative in getting information to the communities. In particular, our more seasoned citizens are extremely reliant on print media. We must actively fill the void until another entity is able to produce a method to keep the citizens aware of the town’s news. Traffic and growth will be challenges as well throughout my term. And keeping a balanced budget will undoubtedly draw on my degree in economics and the skills I gained as a naval officer.

Mount Airy straddles two counties, Carroll County and Frederick County. What kind of pros and cons does that situation present for town residents?

For government, the pro is an ability to get answers from two different sources, and also to utilize the physical resources from two different entities. The con is keeping up with issues on both sides of our town. We have more meetings to attend making sure we are not missing out on opportunities.

For our residents, we have challenges as well. We literally have kids living across the street from each other attending different schools. It is not unusual to join a Scout troop or play youth sports and meet kids for the first time even though they live right down the street. As an elected official, we are keeping a very close eye on the state’s redistricting plan. Currently the legislative districts overlap the entire town across the county lines. Our representation on a state level may soon be altered, and we will need to adapt to make sure we are represented fairly in Annapolis.

You served in the Navy for 20 years. Are there aspects of that experience that make you particularly well suited for mayor?

I do think my Navy background provided some great experience that is transferable to serving as mayor. I led a civilian maintenance department of about 60 mechanics and well over a million dollars. I’ve worked with a lot of people of varying capabilities and personalities. As a mayor, there are some adjustments mainly due to the military’s rank structure, but I am surrounded by good people and we are working well together. Professional courtesy goes a long way in any environment. I think my career in aviation has assisted as well. Landing on aircraft carriers and serving during the Gulf War keeps things somewhat in perspective. I am not so easily rattled by most of the issues facing our town.

What are your hopes for Mount Airy, not just what is within your purview as mayor, but broadly. What do you hope for in the coming years for Mount Airy’s residents and business owners?

Our historic Main Street is truly a Maryland gem. I’ve always said it is a diorama of Americana. It is a walk through time. Our shops occasionally come and go, restaurants may change hands on occasion, but the feel of Mount Airy always stays the same. My hope as mayor is to make sure our historic Main Street maintains that quality. And along that vein, it is extremely important to make sure we do not allow development along the edge of our town to detract from a vibrant Main Street. To do so requires better walkability into town, quality parking, family-fun events and ensuring development complements our Main Street.

Anything else you want folks to know about you or Mount Airy?

The history of Mount Airy is truly fascinating. Many do not realize that Mount Airy is actually at an elevation of 800 feet. Heading west, you climb from Baltimore along the Patapsco River to get here. And then you drop down into Frederick along creeks to meet the Monocacy River and continue to the Potomac River. This is significant because in 1830, the merchants of Baltimore established the B&O Railroad to get their goods to the C&O Canal and points further west. Building a railroad over Parrs Ridge (Mount Airy) in 1830 was one of the greatest challenges undertaken in our country at the time. Please come visit our museum in our historic train station and take a walk along the Old Main Line trail and rekindle that sense of the industrial spirit as you stand exactly where workers cut through the ridgeline in the 1830s to make Maryland a truly amazing state. Mount Airy is so much more than a rail stop. Come visit us!