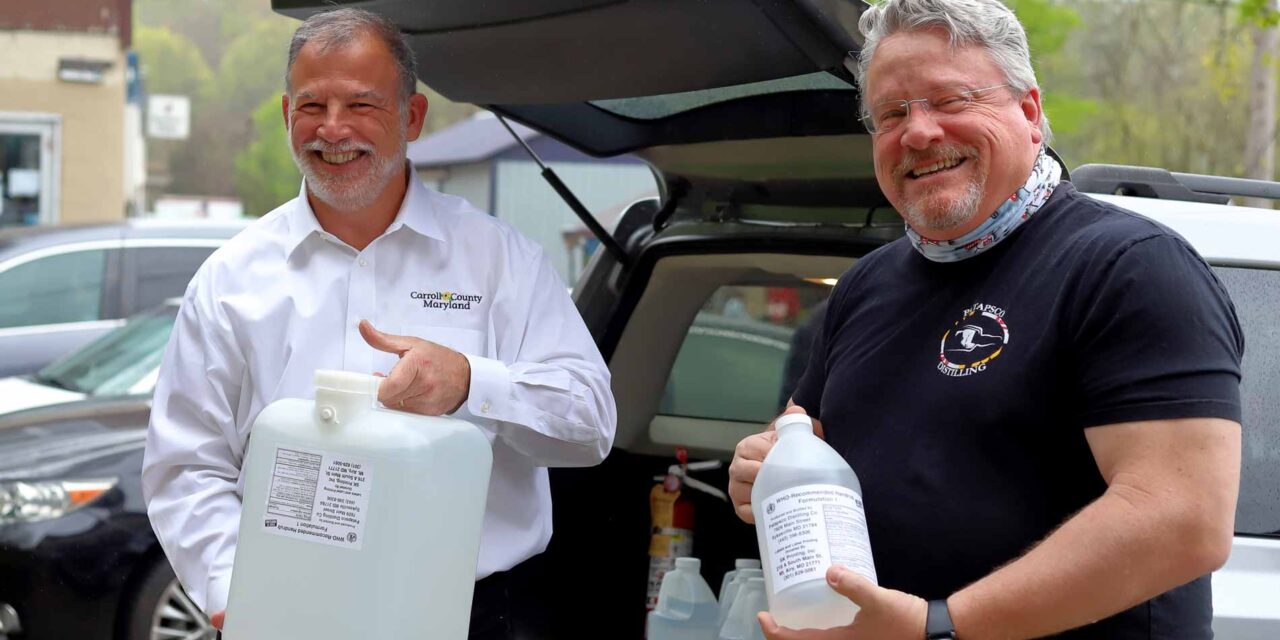 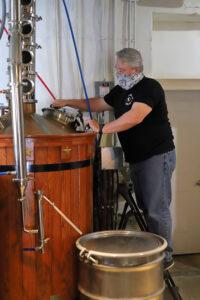 As COVID-19 claimed lives, and states including Maryland mandated quarantines, businesses faced their own crises. Enduring significant losses, many closed their doors, while others creatively repurposed to remain open.

Although Thunderhead Bowl & Grill closed its lanes in accordance with the shutdown of nonessential businesses on March 23, management reopened a restaurant drive-through window not in use for about 25 years, according to Karen Hill, Thunderhead’s food service manager.

“It’s always been there,” Hill said. “We just haven’t utilized it for many, many years.”

Following implementation of the stringent social distancing guidelines, the bowling alley converted to 100 percent drive-through to protect employees. No more than three employees worked in the restaurant at a time, and six remained employed. The other 19 filed for unemployment.

“[Customers] love it,” Hill said. “We’re trying to figure out when we can open back up full-time how we’re going to keep it going. We’re a different kind of busy now.” 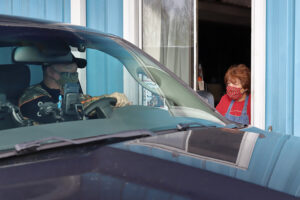 Karen Hill hands food to Chris Tilghman through the newly reutilized drive-through at Thunderhead Bowl & Grill. Customers love the convenience of the drive-through and management is looking at ways to keep it going. Photo by Nikola Tzenov.

The alley’s restaurant was popular for its homemade food and daily specials, beginning at 7:30 a.m. for breakfast, well before the lanes opened. With the quarantine, the menu expanded to include meal deals and quarts of soup.

“I’m noticing they want comfort food, a lot of meatloaf meals and lasagna,” Hill said. “That has been our little savior.”

Hill estimated business was down about 50 percent during the quarantine, with Sunday closures and no bowling.

Chris Tilghman met a group for breakfast at Thunderhead almost daily prior to the lockdown. After, he used the drive-through about four times a week.

“I’m trying to do my little part, trying to keep another business from shutting down,” said Tilghman, who praised the reasonable prices and healthful food.

“I felt bad because we had gotten a truck that morning and we had a freezer full of food,” she said. She put her cellphone number on Facebook, offering chicken breasts, eggs, shrimp and other items she had access to in bulk to supply the four Belisimo’s locations. “I can get a truckload of food without blinking an eye.”

That day, customers lined up outside the Finksburg restaurant and her cellphone notifications were nonstop. The demand necessitated a dedicated page on the restaurant website. Cannon refused to profit from the endeavor, and offered everything from yeast, flour and eggs to chicken breasts, shrimp and burgers, at cost, and even provided toilet paper, in jumbo janitorial and standard size rolls.

“My original thought was, ‘I have it, you need it, I can help you,’” she said. “We’re doing it to help people get what they need.”

Instead of calling one supplier, Cannon shopped several, bidding to get better pricing. In turn, she donated to soup kitchens and food pantries just as she does during the winter months when they need help.

“The more we buy, the better prices we get and that helps more people,” she said.

Cannon also helped home-bound customers. One elderly woman in Westminster, for instance, asked if she could send her monthly check to Belisimo’s for food. Cannon sent a 17-pound brisket, vegetables and what she needed for a month.

“This sounds crazy, but it’s a life-or-death situation for them to get their groceries,” she said.

Customers continued to order carryout and delivery service from the restaurant’s prepared menu and Cannon could pay her employees. The shutdown also coincided with planned renovations, and employees helped with painting, laying flooring and other construction tasks. 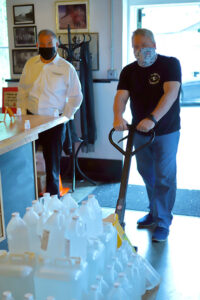 Patapsco Distilling in Sykesville also repurposed itself to remain in business, converting its distilling operation to produce liquid hand sanitizer. Scott Jendrek, a microbiologist by trade, responded to an Alcohol and Tobacco Tax and Trade Bureau (TTB) memo allowing distilleries to produce hand sanitizer if they followed a World Health Organization recipe.

Jendrek already had water and high-proof ethanol in stock and knew he could easily get glycerol and hydrogen peroxide.

“I’m a military brat and I was raised in public service to give back,” he said. Instead of selling hand sanitizer, he ordered 2-ounce bottles from his supplier and gave the sample sizes away. After the shortage occurred, he converted 50 gallons of ethanol for use by Carroll County essential businesses. Once ethanol became difficult to order, he used expired beer, with one pallet yielding 11 gallons of hand sanitizer. Jendrek asked for donations for the bulk sizes provided to counties and emergency management companies, typically $18 a gallon, and continued to provide sample sizes to the public for free. As of mid-April, he had given out about 1,000 sample size bottles to the public.

Sales of its vodka, gin, bourbon, rye and lemoncello, all made from 100% locally grown Maryland grains, continued during the crisis. The tasting room, however, was closed. The hand sanitizer operation enabled the distillery to break even. “I’m just happy we’re allowed to stay open and keep the lights on and pay my rent and pay the employees,” he said. “I’m looking forward to not ever making hand sanitizer again.”

Brewery Fire in Taneytown was gearing up for its busy season when the state shutdown occurred. Dave Palmer hired his first full-time employee one week before the mandated closure.

“I thought I made every wise decision a small business could make,” he said. “But how could I predict this?”

Unfortunately, that employee and their five part-time employees were laid off. Without a tasting room or the ability to pour samples, Palmer and partner Jesse Johnson were forced to convert to online ordering.

“We’re doing what we can to keep the business afloat,” he said. “It’s much worse for other places.”

Brewery Fire has also been working toward adding a canning line to enable sales of canned beer for a faster sales process and a longer shelf life for the beers, according to Palmer. In addition, the closure enabled renovations to the seating area and additions of new tabletops, bar foot rails and a dishwasher.

“No business expected this,” he said. “Rather than wallow in our despair, we have to adapt and grow.” 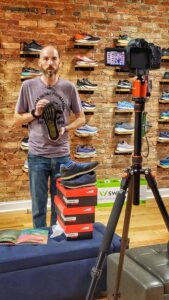 Steve Moore was able to find a new way to operate his Westminster-based store, Run Moore, by offering virtual shoe fittings, curbside pickup, and even a YouTube channel with shoe reviews and contests.

Other businesses also managed to find new ways to operate. Steve Moore, owner of Run Moore on Main Street in Westminster, offered virtual shoe fittings and custom gait analyses by appointment to determine which of the 72 shoe styles matched best with customers.

Despite his efforts, Moore said sales were 75 percent down. He tried to keep his five employees on payroll, although at a diminished rate.

“I’m so lucky we have our online store and YouTube Channel,” he said. “I’m still doing it now because that’s our driving force. Starting our YouTube Channel and being able to ship around the country is really helpful right now.” 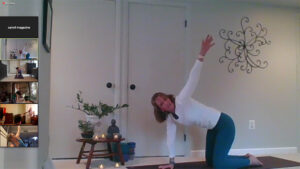 Barb Langrell with Westminster Downtown Yoga teaches a Zoom yoga class on a Wednesday night in April. Virtual yoga sessions have become so popular that they will continue to be offered once the shutdown ends.

Downtown Yoga started virtual classes through the video conferencing app Zoom a week after the government-imposed shutdown. Lynn Olexy, Downtown Yoga owner and Sales Manager for Carroll Magazine,  was able to maintain 90 percent of her payroll.

“It helped us go from zero income to something,” she said. “And maybe it opened a door for me. I could see having Zoom classes available. We will continue in some way.”

Olexy cut her fees by 50 percent for the online package. About 75 percent of her customers continued with virtual classes. “We have a really loyal group of people and that’s helped,” she said.

In addition, Downtown Yoga offered a few donation-based classes to raise money for The Shepherd’s Staff and Carroll Food Sunday.

Cultivated in Westminster also turned to the internet. Two days a week, Tiombe Paige provided virtual shopping hours for customers through Zoom, FaceTime, Instagram and Facebook. She walked through the store and showed items for purchase, and offered pickup, delivery or shipping options.

“It gives them as close to the same feel as being in the store as possible,” she said. “To give people a smile, talk to them for a second like they were in the store, and give them a moment of familiarity and peace. … Those were the aspects of it that were really the most important to me.”

Tiombe Paige, owner of Cultivated in downtown Westminster, was able to schedule virtual shopping appointments with clients then arranged for pickup or mail delivery of the items.

To promote businesses in Sykesville, Deven Pirro launched DevensDeals.com, and waived advertising fees during the COVID-19 crisis. After just 48 hours, 60 businesses throughout Carroll County and as far as Frederick and Germantown had registered.

“I have used these networks in the past to help promote and increase awareness for local businesses,” Pirro said. “We are all feeling the effects of COVID-19.”

Like many businesses, Marathon Gas Station in Hampstead has struggled to remain open. Owner Rajendra Regmi acknowledged the late March shutdown slashed his sales by 80 percent.

Just 40 customers a day — down from 300 — purchased gas and snacks. He installed a plastic barrier, used gloves and a mask, and substantially reduced hours to 8 a.m. to 4 p.m. Gas prices fell below $2 for the first time in seven years, he said.

“I’m thinking I can manage one more month,” he estimated in mid-April. “I don’t know what I’m going to do after that.”

After opening for two days at a significant expense, French Twist’s Hélène Taylor celebrated the Sykesville specialty coffee shop’s sixth anniversary from her sofa. She kept busy refinishing antique furniture. Her landlord replaced the flooring in the cafe.

She expressed her commitment to keep paying her employees from her savings after a successful 2019. She also applied for the Paycheck Protection Program government loan with the hope she can repay herself.

Jeannie Bird Baking Company in Westminster closed after one employee expressed concern about continuing to work. Owner Bernie Vogel had already scaled back to an “open farmer’s market,” with the most popular items packaged for “grab and go.” Vogel and the company’s lead baker planned new menu items, considered equipment needs, and positioned the business for catering once it reopens. Vogel also sold gift cards and aimed to revisit his “long neglected website.” He applied for government support, spent time with his dog and fielded calls from people checking in.

“We’re very loyally supported by [an] unbelievable customer base and community,” he said. “I have no doubt that as soon as we come back. We will be very busy.”