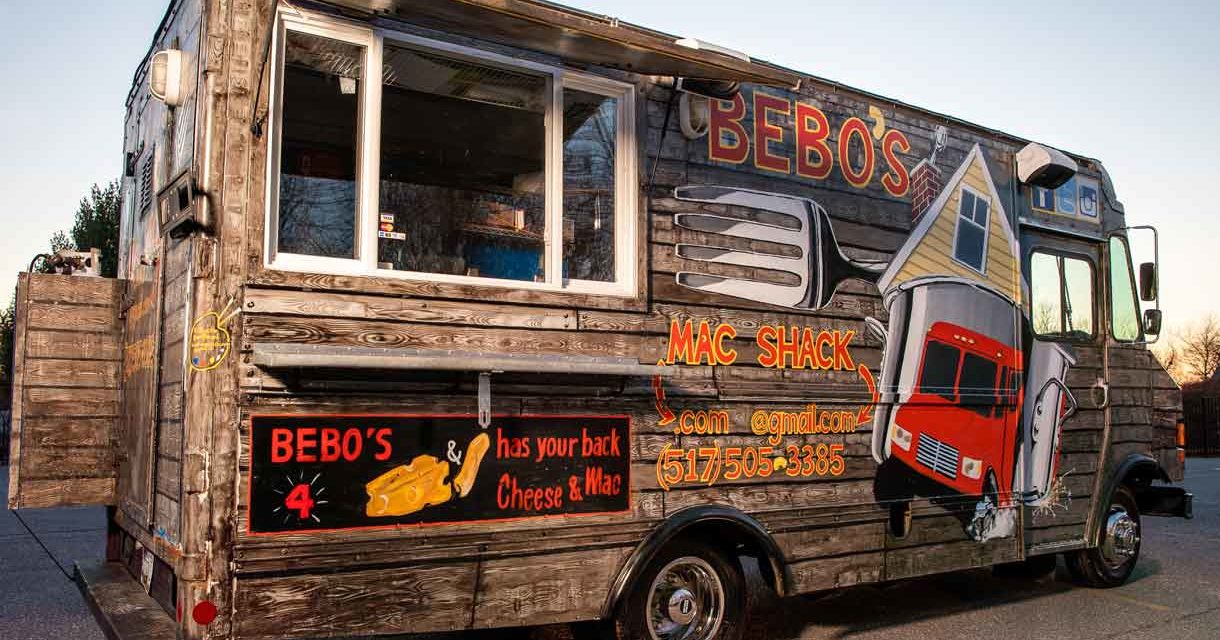 If you’re craving street food, indulge your taste buds in Carroll’s food truck fare. From gourmet macaroni and cheese to pit-smoked whole hogs, the food trucks that serve Carroll County offer creative takes on classic street food specialties that you won’t be able to resist. Explore a sampling of the food truck finds awaiting your discovery this season.

Food Truck Funday Sunday
Sunday, June 14, noon to 5 p.m. • Carroll County Farm Museum, 500 S. Center St., Westminster • 800-654-4645 • www.carrollcountyfarmmuseum.org
Experience the tastes served up at the largest food truck event in Carroll County. Held on the grounds of the Carroll County Farm Museum, this event gives foodies an afternoon to feast on a diverse range of food truck fare.
“We do our best to offer a range of food trucks so that there is something for every price point and appetite,” said Joanne Morvay Weant, Carroll County Farm Museum manager. She said the family-friendly event offers free admission, samplings from local craft breweries, live entertainment, free children’s crafts and games, tours of the farmhouse and Hoff Barn, and artisan demonstrations in the Living History Center.
Don’t miss your chance to vote for your favorite food truck, a contest which has proven to be popular with food truck owners. The food truck that receives the most votes wins a free spot (valued at $1,000) at the Maryland Wine Festival in September.
“We expect this year’s event to be bigger than ever,” she continued, “in part because of the free admission and because of the free activities we offer as well as our new farm-themed playground that just opened this past fall.” 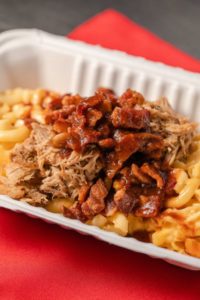 Sample one bite of a Bebo’s Mac Shack macaroni and cheese creation and you won’t want to eat anything from a box again. That’s the way Chris Coil, Bebo’s executive chef and operator, wants you to experience his mac and cheese served from the Bebo’s Mac Shack food truck.

An innovative culinary professional, Coil got his start as a cook supervisor at the former Harry’s Main Street Grille in Westminster, where he eventually became the kitchen manager and sous chef. After several career opportunities in food service management positions, Chris and his wife Katie pursued their entrepreneurial dreams of owning and operating a food truck.

The idea for elevating mac and cheese to food truck fare originated from Katie, who hails from North Carolina. “We met a gentleman there who was an avid tailgater, and he had a thing for mac and cheese. He bought a food truck, and the only thing that sold really well for him was mac and cheese,” Coil explained.

Inspired by this mac and cheese encounter, the Coils launched a plan to create the finest mac and cheese ever made and bring it to as many people as possible. From this ambition, Bebo’s Mac Shack was born.

“The mac and cheese recipe we use is something we would typically take over to mom and dad’s house for family gatherings,” Coil said. From this base recipe, Coil incorporates bold flavor combinations and ingredients into his elevated mac and cheese offerings. The Bebo’s Mac Shack menu boasts several taste-tempting mac and cheese dishes ranging from the Crabby Mac with Maryland blue lump crabmeat to the Brisket Mac featuring homemade mac and cheese served with pulled beef brisket and topped with homemade pico de gallo and sour cream. 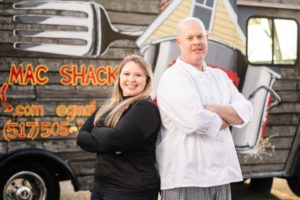 Bebo’s Mac Shack serves Carroll County communities and the surrounding area. During the spring, summer and fall seasons, you can find Bebo’s at a variety of breweries, wineries, festivals and events within a 50-mile radius of Westminster (view its full schedule of upcoming appearances online).

“The most rewarding part of what we do is seeing something that you put together succeed as much as it does. This food truck allowed me the freedom to leave the corporate working world and control our destiny. As long as Katie and I make solid business decisions, we can be as successful as we want to be,” Coil said. “We’re working on new items, and we just want to express our appreciation for the love and support that our customers have given us. It’s an absolute pleasure to serve the community, and we look forward to more partnerships.” 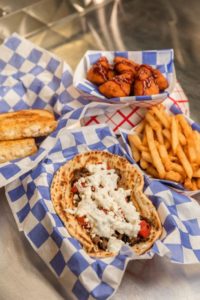 THE BROKEN FORK: Cooking for a Crowd

“You better be ready.” 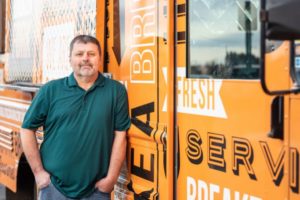 As the owner of The Broken Fork food truck, Petry said he hasn’t looked back on his decision to take cooking for a crowd on the road. He decided to enter the food truck business after a 26-year career as a machinist.

The Broken Fork serves breakfast, lunch and occasional dinners with a menu representing a medley of American favorites: burgers, hot dogs, chicken and steak subs with different types of pit meat, such as pit beef, pit ham and pulled pork. Petry and his pit crew also have the knack for preparing pit-smoked whole hogs. 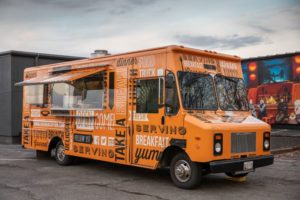 In addition to serving festivalgoers at events such as the Westminster Flower and Jazz Festival, the Sykesville Art and Wine Festival, and Brewery Fire activities in Taneytown, Petry and The Broken Fork team cater dozens of special events, including weddings for up to 175 people.

It takes passion, he said, to own and operate a food truck. “It’s an extremely tough business to be in,” he said. “You have to be watching things like food costs all the time.”

But for those who are willing to put in the effort, the rewards are hard-earned. “When I go to either a carnival or festival, I’m looking for food with a decent value,” he said. “That’s what my crew and I pride ourselves on — serving food that’s of decent value and good to eat.” 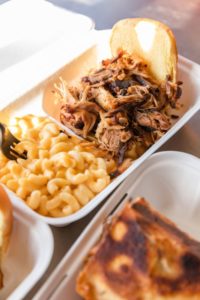 Our Meat Your Face BBQ

OUR MEAT YOUR FACE BBQ: Layering on the Food, Fun, Friends and Flavors

They’re here to cook, and they want you to enjoy their food. Our Meat Your Face BBQ focuses its food truck on keeping customers happy with food crafted for hearty barbecue souls.

George Hinkel — along with business partners Kevin Wade, Lee Hinkel, Numan Mian and Scott McIlvain — make up this crew of barbecue professionals. Their desire to build layers of flavor in their barbecue reflects in their specialties like the pulled pork. 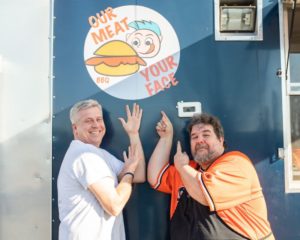 Cooked low and slow for 14 to 16 hours, the pulled pork gets its complexity of tastes from the apple and pecan wood used during the cooking process. These tastes meld with the tang of the white barbecue sauce that puts this pulled pork in a league of its own. According to George Hinkel, the pulled pork is a most requested customer favorite.

Beyond the pulled pork, Our Meat Your Face BBQ also prepares pulled chicken as well as smoked beef, wings and turkey for the ultimate barbecue meat feast. Sides, too, reflect an emphasis on bold flavor profiles, with dishes such as barbecue beans and crab macaroni and cheese.

As if the name itself doesn’t give you the impression, these guys believe in incorporating doses of humor into their helpings. Pork Your Dog features a hot dog topped with pulled pork, coleslaw and the specialty white barbecue sauce. My Humps covers a smoked bratwurst with pulled chicken, pulled pork and a coleslaw topping served with the customer’s choice of sauce.

“We’ve been toying around with new recipes,” Hinkel said, “and we’ve been working on serving grilled cheeses with different meats and cheeses inside. Another one we’re working on is called a folded pizza. It’s basically a bread shell on the outside, and we put cheese and smoked meat, sun-dried tomatoes and different sauces, like a sweet Thai chile sauce, on the inside.”

Our Meat Your Face BBQ serves both public and catered events, including weddings and graduation parties. Hinkel said that his team frequently attends Boy Scout events in Carroll and Baltimore counties in addition to Carroll County school activities, charity fundraisers and programs at area fire halls.

Our Meat Your Face BBQ regulars can find the food truck at Westminster High School track and field competitions and the Carroll County Equestrian Center in Mount Airy. Hinkel also noted that he and his business partners are working on hosting their own event involving food truck fare and fun social activities (follow them on Facebook for more details).

“The people of Carroll County are really open to this type of business,” he added. “We love to cook food and serve people. It’s a labor of love.”