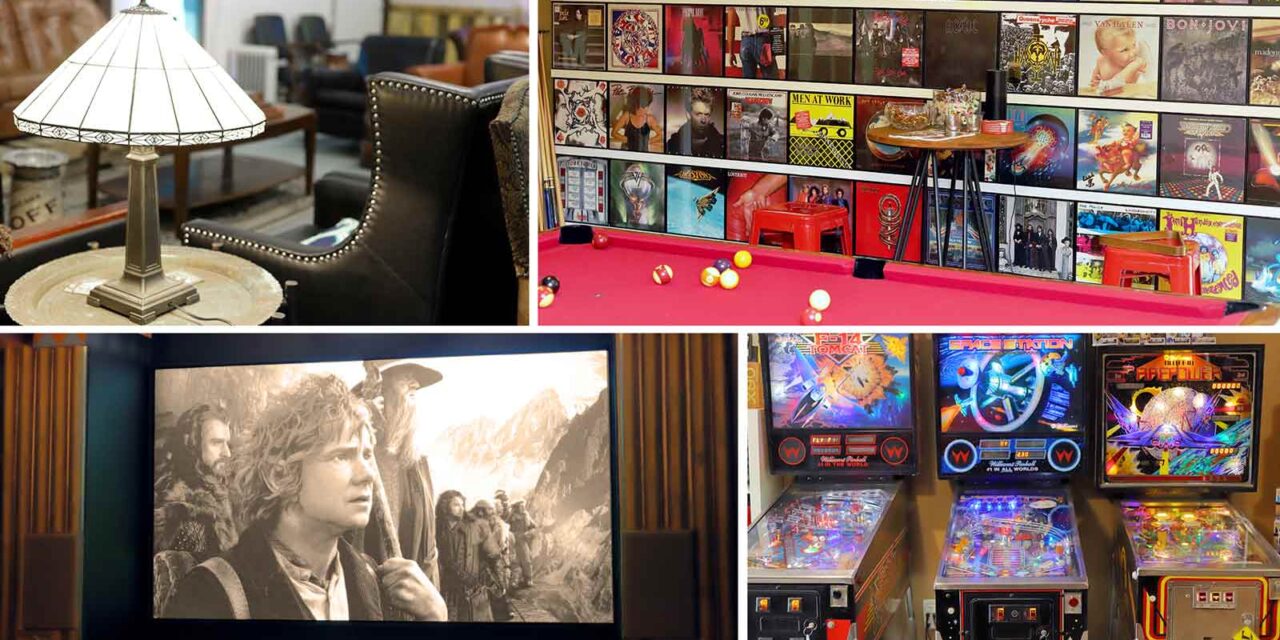 Things to Consider in Creating a Man Cave

Michele Araquette, principal designer and owner of House of Araquette Studios in Westminster, said that there are few thing worth considering in creating a personalized space in the home — be it a man cave or a she shed.

In a 2019 Vox article titled “The Rise and Fall of the Man Cave,” author Kaitlyn Tiffany suggests that man caves were a passing fad, popular in the ’80s and ’90s, that has pretty much died out. The reasons she gives for the supposed decline of the man-friendly space include the emergence of “she sheds and “mom caves” which she suggests took the wind out of the sails for the guys, and she suggests that modern men just don’t need or want their own space.

But it didn’t take much digging to find that man caves are not only alive and well in Carroll County, they are thriving. As we celebrate Father’s Day on June 20, we went hunting for local man caves to see where the guys are blowing off steam.

Westminster-based interior designer Michele Araquette said that man caves are not a new thing. She said the term may be a more recent invention, but said there has always been a need for people to have their own personal space within their home. She said a man cave is simply a physical space in the home or on the property that is carved out for and crafted by the man of the house.

“Women have always had their personal space in the home — with craft rooms and sewing rooms — and men were often relegated to the garage or basement,” Araquette said. “I still see couples following very traditional roles where the wife tends to have more control over the general design and decorating of the house. The men are still holding on to sports memorabilia, college memorabilia and things they love but that don’t really fit in to the overall design of the common living spaces.”

Araquette, who opened her interior decorating business, House of Araquette Studios, six years ago, said that when it comes to the things men are holding on to, it makes sense for them to have their own space to show it off, to enjoy it.

Mike Yost, creator of www.mancavesite.org and co-author of The Man Cave Book, said in an email that he believes man caves are as popular as ever. He said the website — which touts the “largest man cave network” — has about 600 paid members and around 10,000 visitors a month.

According to Yost, man caves have evolved since he launched the website in 2008.

“Man caves are not men-only sanctuaries. Man caves have evolved to family entertainment locations,” Yost said. “They are a great place to entertain family and friends and keep the mess out of the house. Man caves are a fun hobby that most wives fully support and also enjoy.”

The Senator Theatre in Eldersburg 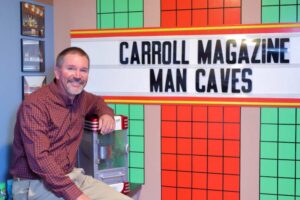 Bill Jones fell in love with Baltimore’s Senator Theatre after his first visit there in 1994. The North Carolina native said that he made point to see big movies at that theater including Star Wars and Lord of the Rings. In 2013, Bill and his wife, Julie, were building a home in Eldersburg, and the Senator played a major role in the design of the home. In fact, a home theater replicating the Senator was the central design feature that the rest of the home was built around.

Bill established relationships with management at the actual Senator Theatre so he could get in there to take measurements and inspect specific design elements. He admits to maybe “geeking out a little bit.”

“I do enjoy watching movies and sports on a big screen, so that was a fun thing to have at my disposal,” Bill said. “But the challenge of figuring out how to build things I had never built before, and the research and working with buddies and engaging with the theater — that all made it particularly fun beyond the appeal of just having a theater.”

Bill considered every single detail in every single aspect of the theater. He wanted to replicate as much as he possibly could. With a degree in meteorology and a career as an environmental consultant, Bill said that he is a science and technical guy, which lends itself to the challenge of building something ambitious and unusual.

“There were definitely challenges with trying to accurately replicate unique architectural features, like the decorative inlays in the columns, the sunburst light fixture, the wallpaper with a very unique pattern,” Bill said. “They were big challenges but fun to figure out.”

His favorite feature? While difficult to narrow down, he said it’s probably the columns, which he cut with a router. He noted that when folks from the Senator visited his home to see his creation, they were flabbergasted that he was able to pull off replicating the columns.

He said the sound system is a close second when it comes to his favorite part of the project.

“I put in a state-of-the-art sound system that is actually more advanced than most of today’s movie theaters.”

He said he contemplated other spaces he could replicate — including the Muppet Show theater and even Camden Yards — but in the end he said he kept coming back to the Senator. But in case one man cave in the home isn’t enough, Bill said he also has a pretty impressive room stocked with Orioles memorabilia as well.

His Senator Theatre gets plenty of use, he said — he and his family, including children Angie and Derek, watch Ravens games and movies there several times a month. 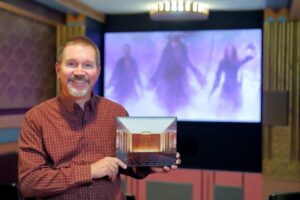 Bill Jones replicated the design elements of the Senator Theatre in Baltimore. From the columns around the theatre screen to the sunburst light fixture – he was able to figure out each challenge to fit into his man cave. Jones also established a relationship with management at the Senator to get specific design elements and take measurements. 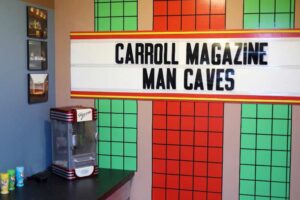 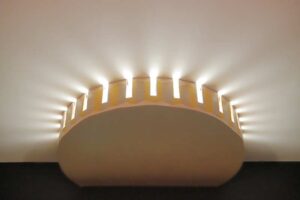 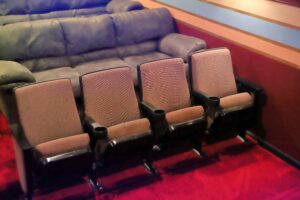 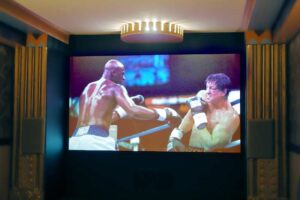 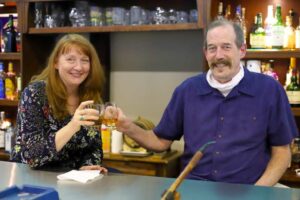 Tom Canon loves a good cigar. He works at Davidus Cigars in Westminster and wanted a relaxing place at home to enjoy cigars with friends. When Tom and his wife, Corina, moved into their current home, there was a 32-foot-by-40-foot structure on the property; it would become a cigar lounge, boasting some pretty fun bells and whistles.

Tom describes the space as well ventilated and very flexible. There is seating for 40 with couches to lounge on, an eight-foot projector/TV screen, video games, and a bar with a fridge and kegerator. He said there are expansion plans that include a home-brewing area, a small stage, pinball games and corn hole boards.

“We absolutely enjoy using the space as intended,” Tom said. “One of the unexpected fun parts is that my wife and I have been using the space for movie nights, just the two of us.”

He said that while the space was designed around his likes and the smoking of cigars, the space functions beyond that.

“It’s a generic party space for family functions, too.”

The space has a name: R.O.C.S. 2.0 or Royal Order of Cigar Smokers — and for “formal” occasions, Tom said, everyone is called a Lord or Lady.

“It has been a very worthwhile investment in our lives’ fun factor,” he said. 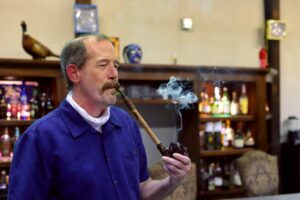 Tom Canon turned an existing structure on his property into a relaxing place to enjoy cigars with family and friends. With seating for 40, fully stocked bar and video games it’s become a cigar lounge and there are plans to expand with even more entertainment. 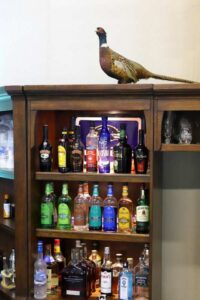 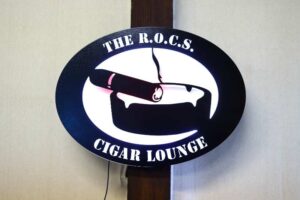 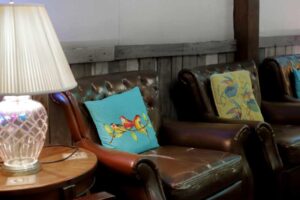 Ode to an era 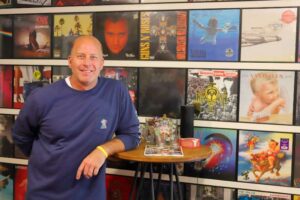 For Eldersburg resident Jason Nimorwicz, his basement man cave is all about the nostalgia of his teenage years during the 1980s. The room is a hodgepodge of things — record albums, pinball machines, video games, a pool table and a theater, but the central theme is things that have meaning to him from years gone by. For example, during a purge of clutter in their basement three or four years ago, Jason said he came across dozens of record albums from his youth.

“I thought, ‘Why haven’t I done something with these?’ They reminded me of my teen years, and I started wondering how I could show them off, make them conversation starters,” Jason said.

He said there were about 60 albums, each with memories attached either to the songs on the album, or concerts he attended, or things that were happening when the songs came out. “It was kind of like reliving things again in some ways,” he said. So he had the albums framed and hung them on a wall — an entire wall is covered in albums by Madonna, Bon Jovi, Men at Work, Phil Collins and Van Halen and others. He said there have been endless conversations about the albums when people visit.

“Every once in a while, I exchange some of the records and put different ones up and when I first posted pics of the wall, I had people voting on which row of albums was the best,” Jason said. “Now sometimes people will find a record at a yard sale or something and bring it to me so I can put it up on the wall.”

While he was growing up in New Jersey, Jason’s dad would bring pinball machines home from Manhattan. “These pinball machines were my PS4,” he joked. “We stayed up all night playing them.” During his teenage years, Jason said he put all kinds of stickers on his bedroom window — skater stickers, surfer stickers — and in an odd turn of events, a friend who still lived in his hometown saw the house being renovated and that window sitting on the front porch of the house. Jason was able to get the window, and that stickered relic from his teenage years is now hanging in his basement.

As is the case with many man caves, Jason said the room is ever-evolving — it likely won’t reach a state of “finished.” He said that while his wife, Elena, doesn’t really seem to appreciate the room’s inspiration, the family as a whole, including his sons Tyler, 20, and Carter, 17, enjoys the space for parties and get-togethers.

“My wife thinks I’m nuts and a lunatic,” Jason laughed. “I don’t think she has the same appreciation for it, but she lets me run with it. My 17-year-old son is an old soul and loves music like me, and I think he has some appreciation for the space.”

He admits the pinball machines can be a point of contention because they are pricey. And he said he’s not quite sure what the next family who owns the home will think of the space.

“Overall we enjoy the space. My sons and their friends like to hang out down there,” Jason said. “The people in my age group that I hang out with have stories of when they first heard a record or remember playing pinball machines when they were young. I like what I grew up with and it’s my way of expressing it, I guess.” 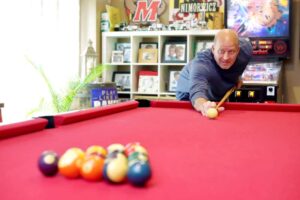 Jason Nimorwicz turned his basement into a remembrance of his teenage years during the 1980’s… with a collection of record albums, pinball machines, video games, a pool table and a theater. His room is ever-evolving as friends help add to the basement collection as they find records at yard sales, etc. 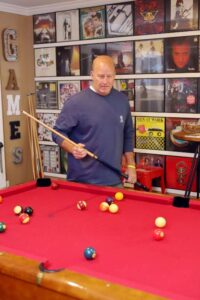 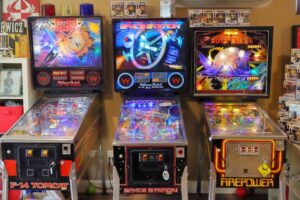