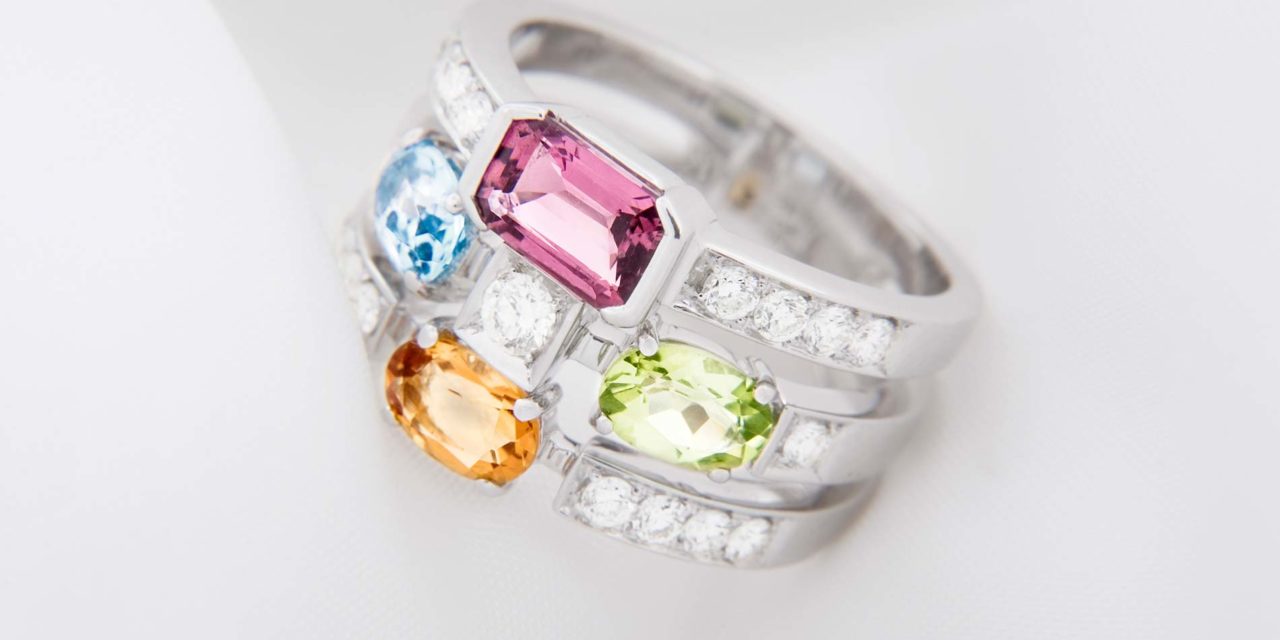 If diamonds really are a girl’s best friend, then moms who have a child born in April are in luck. With Mother’s Day on May 10, local jewelry stores are abuzz with talk of mother’s rings — rings that bear the birthstones of a woman’s children or grandchildren. And for April moms, that means they can wear their best friend on their finger. 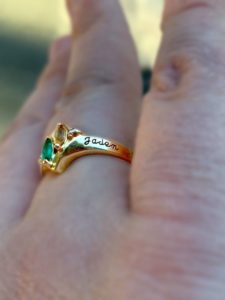 Peggi Menges wears a ring adorned with emerald and topaz with her children’s names.

Eldersburg resident Peggi Mentges proudly wears her 24-karat gold mother’s ring, given to her by her husband, Tony, when their kids were young. Her ring is adorned with an emerald (May) for her daughter, Mallory, and a topaz (November) for her son, Jaden, and their names are engraved on the band next to their birthstones.

“I had always wanted one and Tony took me to the store to pick it out,” Mentges said. “I liked that it was simple and loved that I could engrave their names on it.”

Mentges said wearing the ring has always made her feel like her kids are near, a constant reminder of them when they are away. And the ring has stood the test of time: Mallory was 5 and Jaden was 3 when she got it. Now Mallory is 18 and studying speech pathology at Marywood University in Pennsylvania, and Jaden, 16, is in marching band at Liberty High School.

And the tradition of a mother’s ring is shared by Mentges’ mother as well.

“My mother has a ring that she also considers precious,” she said. “Her ring has a birthstone for my brother and for me, as well as four stones that correlate to the months of each grandchild’s birthday.”

Mother’s rings are given year-round on occasions including anniversaries and birthdays — or just because. But they are often sought out around Mother’s Day. Some historians believe that mother’s rings have been given for centuries, while some jewelry industry insiders trace the emergence of mother’s rings to the 1960s when one was forged at the John C. Nordt Jewelry Company. At the time, the ring comprised two wedding bands put together and presented to a mom from her sons. 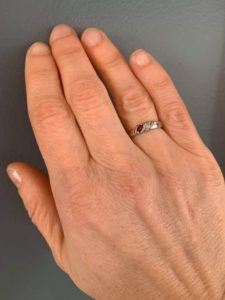 Kirsten Chalk wears a simple white gold band with a ruby for her son, Nathan, and a diamond for her daughter, Brynna.

Kirsten Chalk of Hampstead wears a simple white gold band with a ruby (July) for her son, Nathan, and a diamond for her daughter, Brynna. There’s no fancy metalwork or engraving. The simplicity of the design reflects the intention behind it. She said buying the ring was something that she did for herself, and also for tradition’s sake.

“My grandmother had one, and my sister and I got one for my mom,” she said. “It was tradition to have one.”

The style and personality of mother’s rings has evolved quite a bit, but what has remained timeless is the love and devotion it represents.

Eldersburg-based Starfire Designs has been helping customers update family pieces or design entirely new ones for 26 years. Owner Janet Stout said she has seen pieces of jewelry that have been handed down through generations.

“Knowing we get to share that with each family member as they grow and change is special,” Stout said.

“This particular mother’s ring has gone on to be a timeless keepsake to many loved ones,” Stout said.

Alex Guzovsky, owner of Miki’s Treasure in Eldersburg, said that mother’s rings have evolved, providing something unique and tailored to the individual.

“Not every ring has to be a traditional band with birthstones all in a row,” said Guzovsky,

“Mother’s rings can come in a wide variety of styles and arrangements. A lot of women don’t follow the traditional way. They like a lot of unique and unusual styles.”

In addition to creating unique rings for moms, Guzovsky said he has seen the tradition expand to other types of jewelry. He has sold mother’s pendants, mother’s bracelets, and mother’s necklaces as well — all bearing the birthstones of children.
In lieu of the traditional mother’s ring, DK Jewelers in Westminster offers stackable bands. The assemblage features children’s birthstones on individual bands that can be worn individually or together.

“The bands are really nice because each child has a band of their own to inherit,” said Kelli Cummins, a jewelry consultant at DK. “It’s cool for the children to see their mother wearing the rings; it’s not just metal and rock. The bands are a remembrance of their mother.”

Westminster resident Tracy Fleming had a mother’s ring passed down to her from her grandmother. Her grandfather had the ring designed for his wife for their 25th anniversary. A young man from a farming family, he did not have the money for an engagement ring at the time of their marriage.

The ring is a silver band with a large diamond in the center and two pairs of smaller diamonds on either side of it, appearing to look like an engagement ring. The smaller diamonds symbolize four pregnancies, two of which ended in miscarriages.

Fleming said that her grandmother, not wanting to remember the lost pregnancies, did not like the ring at first.

“This was back in the day, when you didn’t talk about the pain of losing a child,” said Fleming.
But her grandmother came to love the ring, wearing it so much the band thinned at the back. And Fleming wore it until it cracked. Now her daughter has decided that it will be her wedding ring one day, and it must be the one she is proposed to with, saying to her mom, “That is how I know the guy has your permission to marry me.”

Wherever jewelry travels, transcending generations and trends, the purpose behind a mother’s ring is best captured by Stout, who said, “People first, jewelry second.”