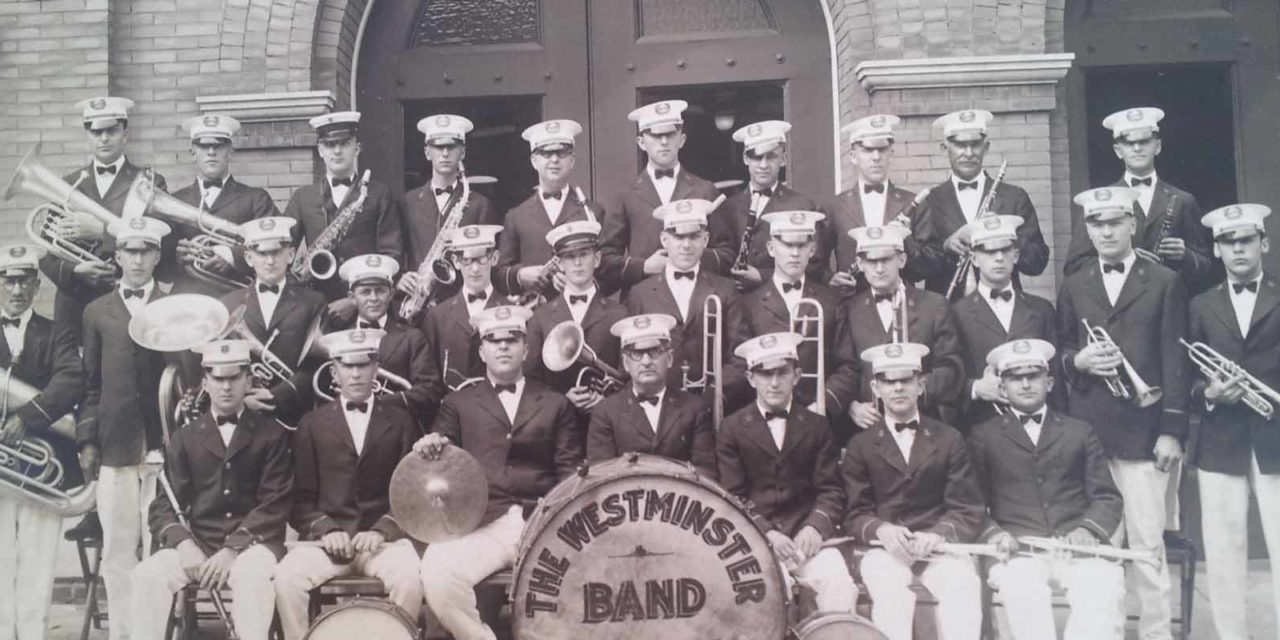 Westminster Municipal Band Celebrates 125 Years
In May of 1893, the Westminster City Band was incorporated. In 2018, there are different people playing the instruments, but the Westminster Municipal Band continues to entertain at venues around the county and the state 125 years later.
“We are a group that loves music and really cares for one another,” said band director Sandy Miller. “We are all volunteer and there are no requirements about attendance — other than that we like our members to participate as much as possible, but family and work come first.”
The band was affected by war in its early years. In 1916, many members went into the Maryland National Guard a members of the First Regimental Band of Maryland National Guard and were sent to the Mexican border. Then, in 1918, the band went to France for World War I.
In 1950, the tan uniforms were changed to the green and gold that band members currently wear.
A color guard was added in 1961. Female members were welcomed into the band in 1984, and today the band boasts members from several Maryland counties, as well as from Pennsylvania and Virginia.
To celebrate its 125th, the band has carried a specially made banner in parades this year. They were also honored with a Governor’s Citation from Gov. Larry Hogan at the Maryland State Firemen’s Convention in June, and the Maryland State Fireman’s Association presented a 125th anniversary flag that the band’s color guard will carry at parades and events. The band has also received proclamations from Carroll County and the city of Westminster.
“The Westminster Municipal Band is a wonderful organization that has contributed to the culture in the City over the course of three different centuries,” Westminster Mayor Joe Dominick said. To learn more visit www.westminsterband.com.

Hampstead Business Gives Car to High School Senior
Hampstead Preowned car dealership has initiatives throughout the year to give back to the community in different ways. Over the summer, the dealership held a contest for local high school students that resulted in a Manchester Valley High School senior winning a car based on her successes in academics, school attendance and extracurricular activities.
Hampstead Preowned owner Anthony Birdsong said that several years ago he decided to start using some of his advertising dollars for community initiative events, feeling that he could combine giving back to the community with getting the word out about his business. He started out with a goal of having a new “community campaign” each month.
In addition to the car giveaway to a local high school student, Birdsong has also given away several cars to families in need, he supports families over the holidays with a party where Santa Claus hands out gifts to children and he does a food drive for local families at Thanksgiving.
This year Birdsong, who lives in Westminster, said he has an ambitious goal of feeding every homeless person in Carroll County on Thanksgiving.
“I’ve gotten as much out of the giving back initiatives as anyone has,” Birdsong said. “It’s done as much for me emotionally and morally as for anyone else.”
To learn more about the community campaigns, visit www.hampsteadpreowned.com.

South Carroll Senior Center Goes To The Dogs
The South Carroll Senior and Community Center has gone to the dogs. Well, at least 2.5 acres of it is being considered for a new dog park.
According to Kathy Martin, an advocate for the new dog park and member of the Friends of the South Carroll Dog Park group, there are no dog parks in the South Carroll area – the closest community dog parks are in Westminster and Mt. Airy.
The Friends of the South Carroll Dog Park organized in January 2017 to discuss the need for a safe space for dogs to play in the area. The group partnered with the Carroll County Department of Recreation and Parks to identify suitable land for the park and to arrange plans for the park’s management once it is built.
The group was able to secure a commitment of 2.5 acres of land at the South Carroll Senior and Community Center for the future dog park.
The project has been divided into two phases – phase one includes constructing a fenced 2.5-acre dog park, concrete vestibule and a paved walkway from the parking lot. Phase II includes creating an additional segregated area for smaller or timid dogs. The total anticipated cost for both phases is $54,425 according to Martin.
The Friends of the South Carroll Dog Park are in the process of raising funds for the new play space and have several upcoming community fundraisers. As of Sept. 1, the group had raised close to $3,500.
To learn more, visit www.southcarrolldogpark.org.

New Inn Opens in Taneytown
Sharon and Christopher Tillman have spent the past two years finding and renovating the Baumgardner House into a venue where they hope guests will come to enjoy Carroll County hospitality. The couple are the proud owners and innkeepers of Georges on York Bed & Breakfast Inn, which opened in July.
“We immediately felt a connection to Taneytown,” Sharon said. “When we first toured the house in late 2016, we not only saw its potential as an inn, but also Taneytown’s potential as a place where visitors can come and explore all that Carroll County has to offer. … We are excited to be a part of Taneytown’s growth.”
According to the inn’s website, the property on which the B&B stands was identified as a Presbyterian Church parsonage on a 1862 map. It consisted of a stone building, used as a laundry and bakery, as well as the existing kitchen and second floor. Those sections were built in 1848 by the Rev. John G. Wolff. (It is believed that that stone structure is older, possibly dating back to the 1700s.) Sharon said that Georges on York Bed & Breakfast, at 10 York St., offers comfortable elegance in a historic setting.
The inn has five guest rooms, all with en suite luxury baths. A home-cooked breakfast is served daily, using locally sourced seasonal ingredients, often from the inn’s garden.
Sharon said their goals as innkeepers and local business owners are to provide guests with a positive experience and to help Taneytown and Carroll County to be exceptional areas for people to visit. The couple, who relocated from Baltimore County in 2017 to open the inn, said they feel fortunate to be a part of Taneytown’s landscape during an exciting time.
“There are new businesses, new energy and lots of excitement here in Taneytown, and we are very proud to be a part of the city’s renewal,” Sharon said.
Learn more at www.georgesonyork.com.

Invasion of the Taneytown Pumpkin People

October 1–31
See the light pole displays as you tour Taneytown. Vote for your favorite.
All day. Various locations in Taneytown.

October 5–November 11
All have been loaned to the Museum from citizens of Taneytown and the surrounding communities.
Fri.: 10am-1pm; Sat. & Sun.: 1pm-4pm. Taneytown History Museum, 340 East Baltimore Street, Taneytown