New Ways to Get High Becoming a ‘Full-Blown Epidemic’ 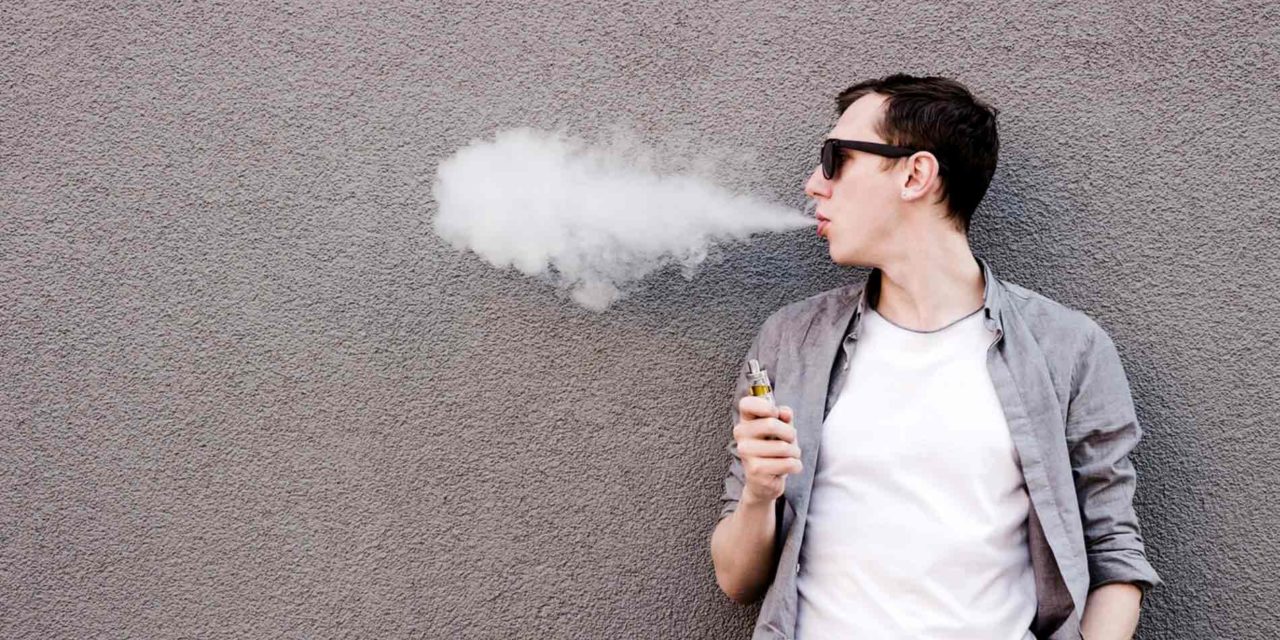 The top drawer of Meghan Brown’s desk is filled with so many confiscated vapes that she calls it her “vape bodega.”

“Vape devices come in a variety of shapes and sizes, so it is tough to keep up with what is unfolding,” the assistant principal at Liberty High School said.

And what is unfolding, she and others contend, “is a full-blown epidemic that is rampant, prevalent and so easily hidden. Kids you wouldn’t think do it do it,” she added.

Brown partners with her colleagues and numerous agencies around the county to curb the rise in vaping, which the local Health Department defines as “the use of an e-cigarette to inhale an aerosol that usually contains nicotine, flavorings and other chemicals.”

“Vaping,” “JUULing,” and “dabbing” are all part of youths’ everyday language as a growing number of them turn to electronic cigarettes (e-cigarettes) and new marijuana products for a mild buzz or an obliterating high.

And while these terms are terms known by most youths, sometimes as early as elementary school, the language, the use and the health effects of vaping are still foreign to too many people, according to Christine Tobias, assistant supervisor of health for Carroll schools.

She encourages every person she talks to do their research and “try to understand what we are now calling ‘modern marijuana.’ It’s a big deal.”

“This generation is filled with guinea pigs, just like the first generation of smokers,” said Shelly Brezicki, a health teacher at Manchester Valley High School. “And knowing the long-term and short-term effects of smoking, who would want to be a guinea pig for something that is probably much worse?”

As the county Health Department website explains, “Vaping is the use of an e-cigarette to inhale an aerosol that usually contains nicotine, flavorings, and other chemicals. JUUL is a brand of e-cigarette that is shaped like a USB flash drive, [and] dabbing is another word for smoking or vaping THC extracts from marijuana.”

The term “dabbing” comes from the fact that it only takes a dab of the extract to get high.

In reality, according to the website intheknowzone.com, the extract is butane hash oil (BHO). It is extracted from marijuana using a solvent, most often butane.

“The end result varies in color from pale yellow to yellow-brown, and in consistency, from soft and pliable (ear wax or budder) to hard and amber-like (shatter),” the website notes.

In tight collaboration, the public school system, the county state’s attorney’s office, the Health Department, the Chamber of Commerce, and the Carroll County Sheriff’s Department, to name a few, have been raising awareness about vaping, JUULing and dabbing.

Members of the team have attended educational conferences, and secured grants to rewrite curriculum, offer educational programs for parents in the evenings, provide information online, and engage students in ways that ensure they understand the hazard of nicotine — in all forms — as well as the life-altering effects, known and unknown, of tetrahydrocannabinol.

Tetrahydrocannabinol (THC) is the chemical in marijuana that is responsible for most of the intoxicating effect people seek and, Tobias said, many youths are unaware that vaping products can have very high levels of THC.

Alluring vaping flavors, like strawberry, watermelon, cherry, raspberry and even popcorn can to pull youths to their first experience with vaping and JUULing, said Buscemi.

“The thrill of secret rebellion with friends, and targeted marketing that sends mixed messages contributes as well,” he added.

“JUUl is much more addictive because of the way nicotine is absorbed through the body,” Tobias cautioned. “The taste, no smell, no stains on teeth — it’s enticing to them. Youths see e-cigarettes as a new product that is trendy, and they think vaping is the lesser evil [compared to smoking] but no one knows the long-term effects.”

“The flavors all have chemicals, known and unknown,” she added.

Seventeen-year old Nickolos McKoy, a senior at Liberty High School, tried vaping for the first time during the summer between eighth and ninth grade. He’d had a cigarette before, but discovered that he loved vaping’s sweet flavors.

“My parents didn’t know for the first month, but when my mother found out she was pretty mad,” he added. “She still smokes and she didn’t want that addiction to haunt me.”

Nickolos still vapes and estimates that he spends $40 every three months for a vaping device, and $20 every two weeks for “juice,” (the fluid that is vaporized into an inhalable form), and about $16 every two months for replaceable vape coils (which heat the juice to vaporize it).

Nickolos doesn’t vape so often that he hangs out in the bathroom on his knees hoping for someone to come in and share a few hits, like some do. He vapes occasionally, away from school, for the calming pleasure, he said. And because he has experienced shortness of breath, he stops vaping during basketball and baseball seasons.

Vaping is not something that can be simply experimented without consequences. “Earliest research has shown that adolescent exposure to nicotine, vaping, opens the brain neurologically to a higher likelihood to other addictions later in life,” Tobias said.

When it comes to addiction, youths tell themselves, “It will never be me.”

“But because of four or five decisions, the end result is addiction,” said Buscemi, who before coming to Manchester Valley one year ago worked as an emergency room nurse in Baltimore and as a firefighter and emergency responder. “They never intend to be addicts, but it happens.”

“The students are still children, and their growth process isn’t complete until their mid-20s, especially brain growth,” Buscemi added. “Vaping, JUULing, dabbing — these are gateways that lead from bad to worse.” 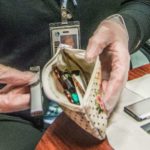 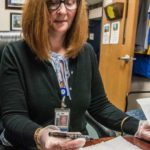 “Kids you wouldn’t think do it do it,” say Meghan Brown. – Photo by Phil Grout. 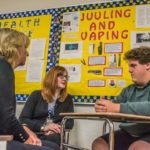 Meghan Brown chats with Liberty High School senior Nic McCoy and Michelle Hodgkiss, a school secretary and parent, about the increased concerns of vaping among the local student community. – Photo by Phil Grout.

As community and state organizations team up to turn the vaping tides of epic proportions, their messaging calls for, first, recognizing if sons and daughters vape and then, start talking.

“If someone goes to the bathroom frequently, or has mood changes, or smells like a Jolly Rancher after returning to the room, you should probably broach a discussion about vaping, said Michelle Hodgkiss, a data clerk at Liberty High School who describes herself as “a first line of defense when students come into the office.”

Use positivity rather than the anger and the shock approach, advised added Warren “Buddy” Buscemi, a nurse at Manchester Valley High School.

“Start that conversation and let the child speak, without an emotional reaction, which is hard as a parent,” Buscemi added. “An angry parent yields an angry child and walls start building.”

Opening questions could be “What’s new with your friends? “What do they like to do?” “Have you seen them vaping?” And then ease into the direct question, “Have you vaped?”

“Be prepared for a yes,” Buscemi said, “and react in a way that continues the exchange of good information and establishes trust.”

Launched first by the women’s basketball team at Manchester Valley High School, a letter-writing initiative called Dear Future Me is unfolding at local schools countywide. Educators encourage parents to consider the activity at home as well.

Youths write a letter to their future selves and share dreams, goals and ways to hurdle challenges.

Dear Future Me –
What matters today is that you are doing what you love and I hope that what you love is
not influenced by what other people want you do.

Dear Future Me –
Life has so much more to offer than what you see right now: road trips to drive,
people to meet, sunsets to watch and paintings to paint.

“We have found that if students talk about goals and then ask, “Does this choice help or get in the way of that goal?” they will make better choices,” said Tobias. “Dear Future Me is a great example of positive social norming rather than sad, shock messages.”

Turning their letters into videos and pulling students’ words from them to share in the daily announcements has bolstered the program’s effectiveness.

“We are all in this together,” said Shelly Brezicki, a health teacher at Manchester Valley High School. “We need to help students who vape, or JUUL or dab before it gets harder for them to return from addiction.”

Dear Future Me –
No matter how easy it is to fail, never forget how good it feels to succeed…

How to Talk to Your Children about Vaping