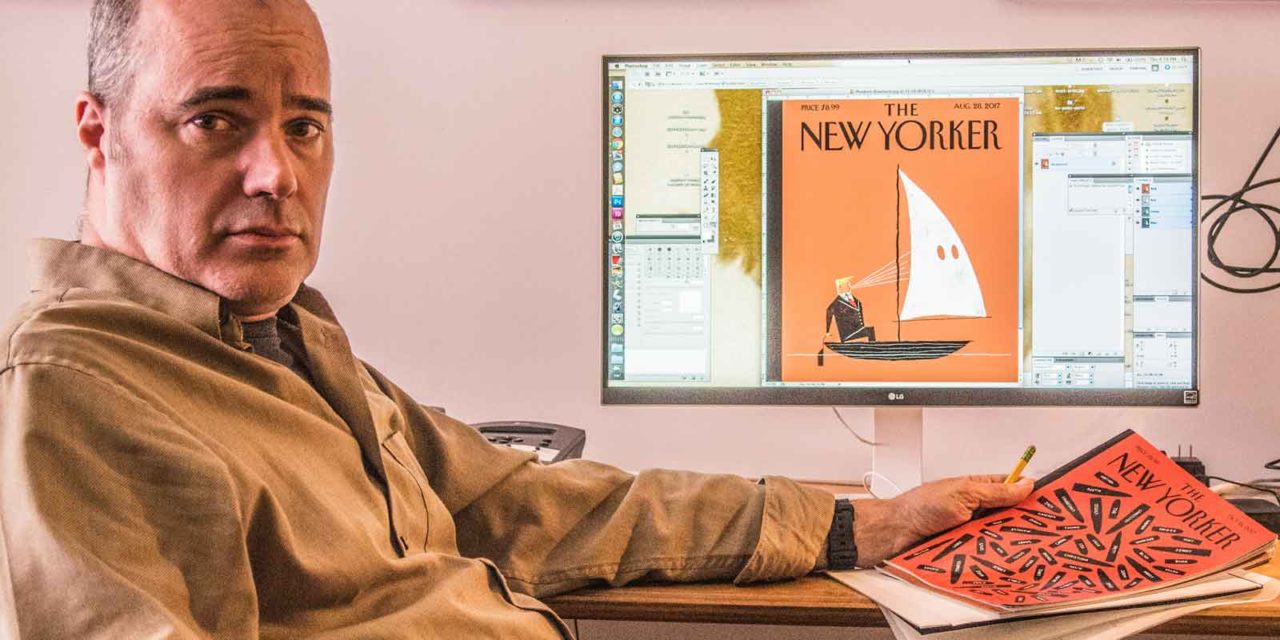 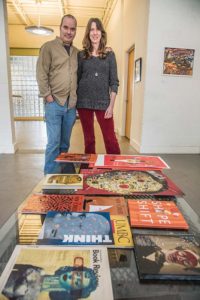 Long before David Plunkert sat down in his Baltimore studio last August to draw the illustration that would earn him a prestigious national award, the Carroll County native was already a successful graphic artist.

The artwork of the 1983 North Carroll High School graduate had been published in many of the nation’s leading publications, including such diverse icons as Forbes, Time, Rolling Stone, The New York Times, and Wall Street Journal. Plunkert, who also produced artwork for Woodstock ’94 and for the 2000 Sundance Film Festival, earned the Best Poster award at the 2009 South by Southwest Festival.

Plunkert added another impressive achievement in February 2018, when he won the American Society of Magazine Editors’ Best Cover Contest. The award-winning cover, which appeared on the Aug. 28, 2017 issue of The New Yorker, was entitled “Blowhard” and pictured President Donald Trump in a boat blowing into a sail that looked like a Ku Klux Klan hood.

Plunkert conceived the award-winning illustration following Trump’s defense of white supremacists at the violent Charlottesville, Va., rally on Aug. 11-12 that left three people dead. Following the Charlottesville incident, Trump had commented that “there were very fine people on both sides” of the demonstration.

“After Trump made his statements where he drew the equivalence between white supremacist groups and other people that were protesting, I started doodling this out,” said Plunkert, who is an adjunct professor at the Maryland Institute College of Art. “You can read it that Trump was possibly in the boat with white supremacists. The picture speaks for itself.”

Plunkert wasn’t on assignment for The New Yorker when he sketched the Trump cover. But he forwarded his initial design to the magazine’s art department.

“The sketch that David sent us is that kind of an image that you would see on a poster,” said Francoise Mouly, art director for The New Yorker. “The cover has to be communicated very clearly and very quickly. We look for images that make you think.  David’s idea was the right thing, at the right time.”

In early October, Plunkert sketched what would become his second New Yorker cover of the year. Following the Oct. 1 mass shooting at a Las Vegas, Nev., concert that left 58 people dead and more than 500 injured, Plunkert drew a cover entitled “October 1, 2017: One Day in a Nation of Guns” that was strewn with bullets.

“[The New Yorker] called me and said, ‘We’d like you to tackle this,’” said Plunkert, who lives in Cockeysville. “The proliferation of guns and gun violence is something that I care about. Originally, the idea I sent to them was a little more general and the names were unspecific. But The New Yorker came back and suggested that we put the actual names of the victims [inside the bullets].”

When the Oct. 16, 2017 issue of The New Yorker was published, each bullet contained the first names of shooting victims.

“David is smart, and he does very effective images,” Mouly said. “His covers really stand out. David’s sketch with the bullets captured the tragedy of the act. We chose the first names because we wanted to personalize it. It was a memorial, and the names spoke to the finality of the act.” 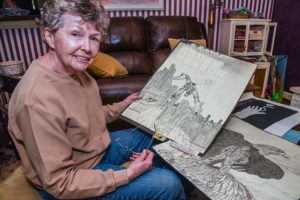 Janet Holman-Miller of Harney looks over some of Dave’s early artwork when she was his art teacher in the early ’80s.

Plunkert started drawing when he was 3 years old. His original plan was to become a cartoonist and comic book artist, but that goal changed when he attended Shepherd University in West Virginia.

“I fell in love with graphic design,” Plunkert said. “In college, we started talking about using pictures to communicate ideas. It was about making something that resonates with people.”

Plunkert’s early interest in art was nurtured at North Carroll High, where he was heavily influenced by art teacher Janet Halman-Miller.

“She would give you challenging assignments,” Plunkert recalled. “She wouldn’t let you just stay in your comfortable little box.”

“David came to art because that’s where he found joy,” said Halman-Miller, who taught at North Carroll from 1962 to 2000. “David had a drive, and used the art. He possessed a fantastic mind, and his skills were always there. He had an intellectual approach to what he did, and it was an interesting time to watch him evolve.”

Halman-Miller has admired the career that her former student has built, and is especially proud of Plunkert’s award-winning New Yorker cover.

“He has found a way to be there at the right time,” said Halman-Miller, who is retired and lives in Taneytown. “He nailed the concept [with the Trump cover], and his timing was perfect.” 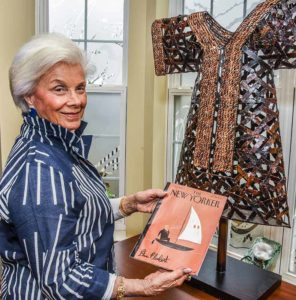 Plunkert’s award-winning New Yorker cover has become a coveted possession for longtime family friend Dolores “Dolly” Snyder. On the day that the “Blowhard” cover was released, the Westminster resident drove to Owings Mills to get a copy of The New Yorker, then went directly to a family picnic to have Plunkert autograph his cover.

“I think that cover spoke volumes,” said Snyder, who has known Plunkert since 1980. “When I heard about the national award, I was thrilled for David that he had reached those heights. It’s just fantastic what he’s been able to do throughout his career.”

“It was especially nice for him to be recognized, because he does so much important conceptual work,” Hesselberth said. “When [the Trump cover] was just a rough sketch, I thought that it was a really powerful statement and something that he should get out there and submit.”

Plunkert’s artistic influence continues to be felt. He was commissioned by the U.S. Postal Service to create artwork for stamps that celebrate Science, Technology, Engineering, and Mathematics (STEM). The stamps were released April 6. 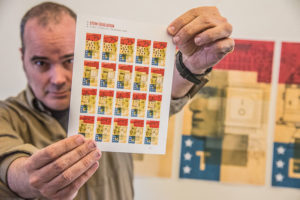 Plunkert with his line of stamps.

“Originally, the stamps were going to be about American innovation,” Plunkert said. “I did some visuals and went to the committee, and at that point they re-directed the project to STEM education, which was a lot more focused. [The design] had to work for the actual experts in that field, but also had to communicate to lay people.”