On the Road To Recovery 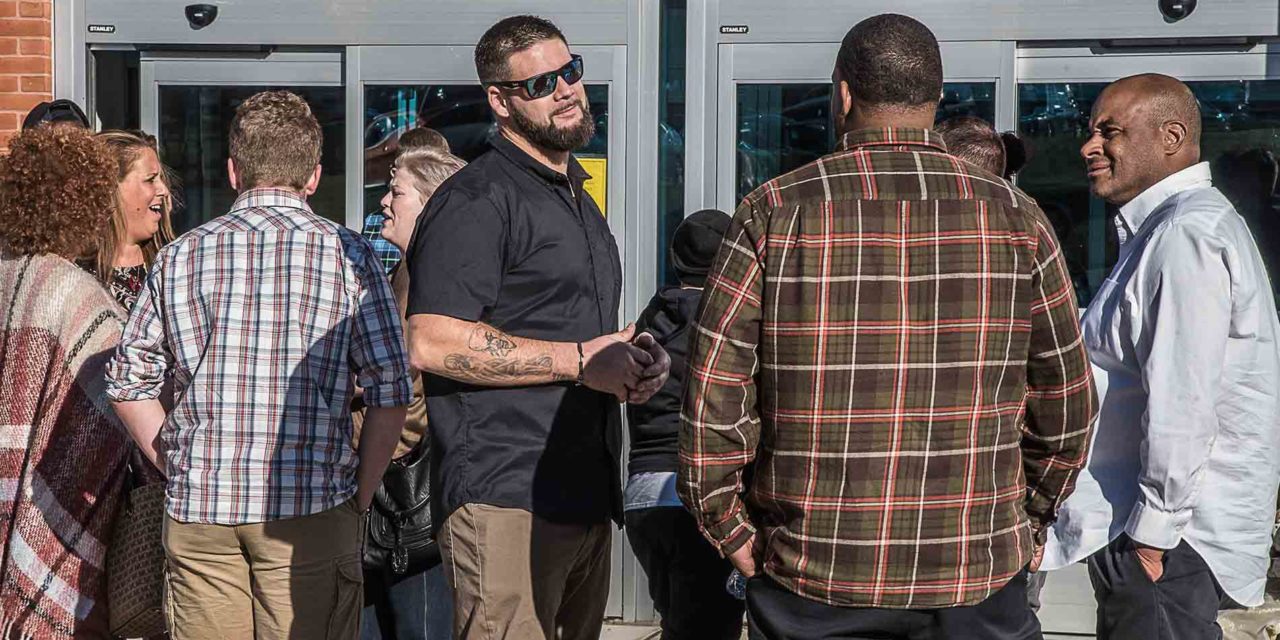 The loss of a family member, or another personal tragedy, can cause a downward spiral to disaster. Kevin Wright was just 14 years old when his father committed suicide, and he turned to drugs and alcohol to lessen his pain.

Through his teens and early 20s, Wright used alcohol, cocaine, marijuana, crack and heroin, eventually resorting to robbery and theft to feed his addiction. He landed in jail for the first time in April 2015. After subsequent arrests and probation violations, he was sentenced to six months at New Horizons, an addictions treatment center in Emmitsburg, but he waited in a jail cell for four months for a bed to open.

“Jail was fun,” he says of working in the kitchen, playing chess and trading commissary items for money and drugs. Wright got caught with “dip,” cigarettes dipped in a hallucinogenic, and was transferred to New Horizons. He enjoyed the small groups, fitness center and book studies. But he wouldn’t admit his wrongdoing, and after his release succumbed to his addiction, wiping away 14 months of sobriety. He drank while at work and while on methadone, used to help addicts detox from opioid dependence, vomited the dose and saved it to take after the liquor stayed down.

A night of partying landed him in the hospital with an overdose, and his probation officer suggested Drug Court.

Established in 2007 as part of the Carroll County Circuit Court, the Carroll County Adult Drug Treatment Court aims to reduce dependency through an intensive, court-supervised program that provides an alternative to incarceration for some criminal offenders. The Carroll court operates though funding and administration from the Maryland Judiciary’s Office of Problem-Solving Courts, which supports collaborative therapeutic programs in 21 of the state’s 24 jurisdictions, according to its website.

Getting to the ‘root cause’

“We’re looking for other options than just incarcerating people to try to get to the root cause of not only criminal conduct, but recidivism,” says Judge Fred S. Hecker, administrative judge of the Drug Court. “We recognize that a large percentage of crimes are being committed by people as a result of their addiction to drugs or alcohol.”

Participants must be 18 years or older, Carroll County residents, nonviolent offenders with substance abuse as their primary diagnosis, and consent to enter the Drug Treatment Court program, which comprises frequent drug and alcohol testing, monitored compliance through community supervision, individual and group counseling, treatment services, and bi-weekly progress visits before Judge Hecker. If individuals are compliant through all aspects of the program and maintain employment or volunteer service, they progress to different milestone levels with fewer restrictions. Those who advance in the program are applauded for their progress and photographed with Judge Hecker.

“Positive reinforcement is a critical element of the Drug Treatment Court,” the judge said. “I try to connect personally with them. I think that makes a difference.”

Once participants reach and maintain the fourth and final level, they become eligible to graduate. As many as 85 participants have been in the program at any given time; the current roll is 73. Twelve people graduated in October, after an average of 18 months in the program.

Some participate for more than two years, or even longer, and some exhaust their opportunities by disappearing, relapsing or falsifying drug tests. Those individuals are terminated from the program, sentenced and incarcerated. Some relapse before they get better. They may spend a weekend or two, sometimes longer, in jail for violating the rules.

“Drug Treatment Court is a voluntary program — it’s a choice,” says Judge Hecker. “Some people say it’s too hard; they’d rather do time. It’s a tough program; we require a lot of people.”

The program also requires a curfew checked by local law enforcement and regular drug testing that includes random urinalysis, patches and the use of a Sobrietor, a Breathalyzer that must be employed every three hours from 6 a.m.-9 p.m.

His first night on the Sobrietor, Wright drank, and his drunken driving was tracked by GPS. Sitting in jail for a month, he realized it “wasn’t fun” and turned himself around for good, with the help of the Drug Court.

Hecker says the primary drugs of abuse in Carroll County are heroin and other opioids, cocaine, marijuana and alcohol. Opioids pose the greatest risk, he said. In many instances, unbeknownst to the user, drugs like heroin are mixed with fentanyl, a synthetic opioid that is more potent — and therefore more dangerous — than heroin. It’s used medically to ease severe pain, but fentanyl-tainted drugs pose a serious risk of overdose and death.

This risk has taken a heavy toll in Carroll County, and around the country. However, Hecker said, educational efforts in the county are making a difference.

“Overdose deaths are down a bit for the first time in a long time,” he notes. According to the Opioid Operational Command Center of the Office of the Governor of the State of Maryland, opioid-related deaths in Carroll County dropped by 50 percent in the first half of 2019 compared to the same time period in 2018. In Maryland as a whole, the mortality rate dropped 11 percent.

Like Wright, tragedy drove Lindsey Staymates to a life of addiction. When she was 15 years old, her uncle died and her parents separated in the same week. She turned to drugs to “cover up how I felt. It was … about using to forget, or to not feel,” she says.

After being drunk at a high school game, she entered a youth program. She drank large quantities of water to pass urine tests. By 17, she was addicted to pain pills. She partied her way through college — earning her first DUI at 19 — but managed to keep her friends and her job and still graduate. She notched another DUI at 22, then turned back to pills to “feel normal” and continued the same cycle while living with her mother. She spent her money on drugs, and at 27 added a third DUI.

“Instead of getting a lawyer and doing what I needed to do, I accepted the fact that I was an alcoholic and drug addict, and this is where my path is taking me,” she said. “I couldn’t see myself not drinking or doing drugs.”

Staymates lost her job, abandoned her car and lived on the run, avoiding court dates and trying to evade police, who had warrants for her arrest. She stole to get money for drugs. At 5 feet 4 inches, she was a meager 90 pounds.

“Those last three years were a really dark period,” she says. “I was dying.”

An overdose landed her on the street. She awoke to police officers leaning over her. She gave a fake name, as her record included a note that she had small wrists and needed to be handcuffed tightly. She surrendered and went to jail.

“I didn’t know what I would do, but my basic needs (food, bed and safety) would be met for the first time in years,” she said.

Staymates remained in custody for nine months, giving up her “will” and agreeing to go to rehab for a second time. This time, she followed rules,
met with counselors, attended meetings. After 31 days, she moved to a sober living facility. She would say to herself, ‘Wow, I didn’t use drugs today. I didn’t get drunk today.’”

Seven months later, she moved to Reclaiming My Life, a recovery house, and started Drug Court. She checked in with staff members, held down a job, went to meetings, got her license back, and bought a car. She’s stayed clean for 18 months and proven herself; she’s now the house manager at Reclaiming My Life and works as a behavioral health technician at Foundations Recovery Center, helping others in rehab.

“Drug Court allowed me to become a productive member of society. I would have never been where I am right now,” she says. “Instead of sitting in jail, it allowed me to develop a foundation for my life in recovery.” Drug Court, she says, kept her accountable, helped her learn responsibility, and become motivated. Staymates, 30, officially graduated from Drug Court in October.

Shields, who shot heroin daily for more than a decade, came from “a good family” in Silver Run. His parents led missionary trips, he attended church three times a week and was involved in sports. But he always looked for a way to “get outside myself,” whether with sports, drinking or smoking marijuana, beginning in middle school. By 15, he turned to cocaine and pills.

At 18 years old, he toured Europe playing rugby, and as much as he excelled, he partied even harder. “I couldn’t put the drugs down,” he says.

Then, like Wright and Staymates, tragedy struck as his best friend was killed in a construction accident. That’s when he turned to heroin and Oxycontin and proceeded down a dark path. He became a dealer and gave a friend drugs only to find him dead on a couch. Driving to the hospital, he pulled over to put his drugs by a stop sign because he knew he would “need them later.”

“Even with my best friend’s dead body in the car, I’m still selfish and self-centered to the core. That’s where my disease would take me,” he says.

Guilt only compounded his problems. He’d remove drugs from dead bodies and believed they were the solution to his problems. He sold his family’s tools and jewelry for drug money. He became homeless, continuing the cycle of using, stealing, selling and buying.

But his pursuits caught up to him and he landed in jail several times. His last time, after five months behind bars, Shields entered the Drug Court program while on methadone for his heroin addiction. While on methadone, he smoked crack cocaine. Failed drug tests landed him back in jail for weekends, but he loaded himself up on meth and slept the weekend away. After returning for weekends and continually failing, Shields served seven consecutive days, back in an orange jumpsuit and going through detox again.

On day six, he met his sponsor, who suggested rehab. Drug Court officials agreed, and he moved to a recovery house. After a difficult first two weeks, Shields turned the corner. He attended five meetings a week and committed to the 12-step program to beat his addiction.

“In hindsight, it turned out to be the biggest blessing of my life,” says Shields of his eight-month stay. He was sober, playing volleyball and serving as secretary for meetings. He was the happiest he had ever been in his life. He could finally look at himself in the mirror.

Today, he’s a supervisor at a company that builds ambulances but he also opened Anchor Recovery in Westminster this summer, giving back to the community that helped him get clean. He spent two years in the Drug Court program.

“My joy in life is helping someone else find the joy in their life,” he says. “I give back as much as possible. I wake up and want to kiss the ground for the life I have today.” 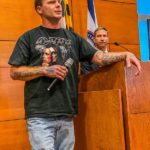 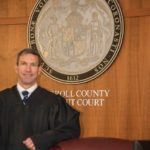 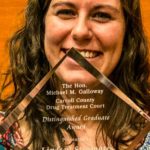 Lindsey Staymates has come a long way from her life of addiction and incarceration to a successful graduate of Drug Court and the recipient of the Galloway Award. 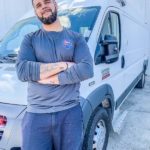 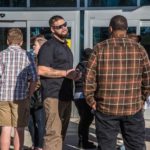 Travis Shields talks with the many friends who gather for Drug Court graduation at Carroll Community College.