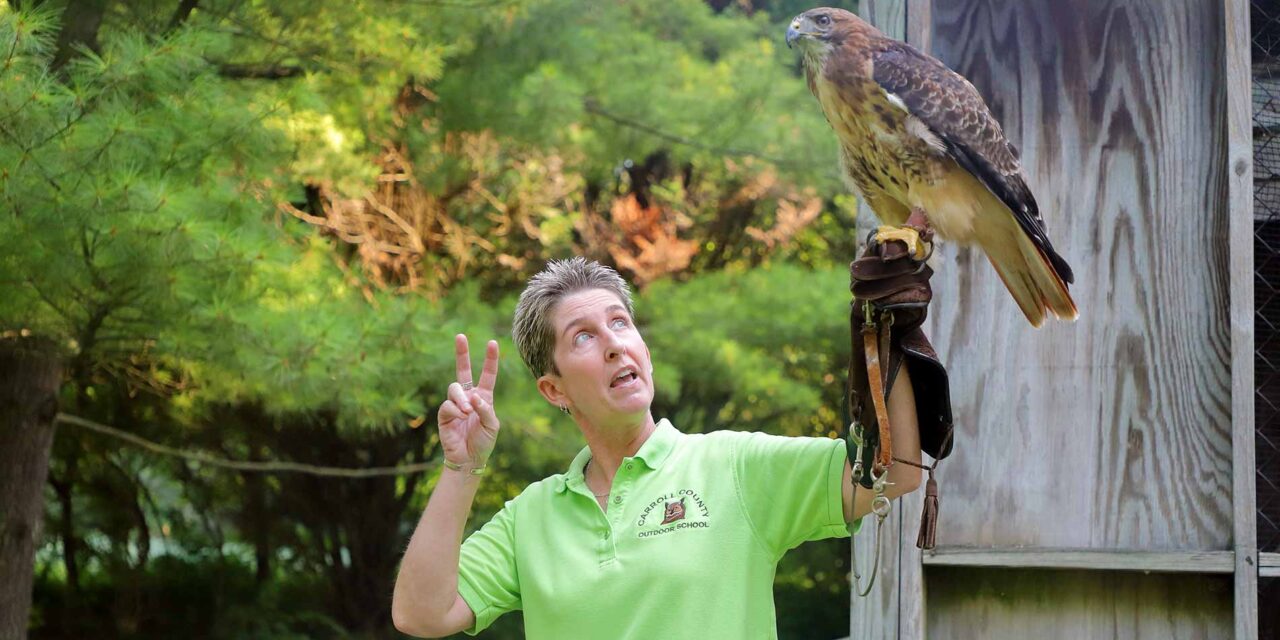 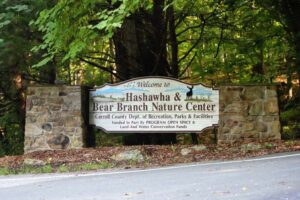 It’s more than a bunch of “old fields” as its Native American name implies. As a matter of fact, Hashawha Environmental Center and Bear Branch Nature Center really do have something for almost everyone when it comes to doing and learning things in the outdoors.

And, as any student who has graduated from Carroll County Public Schools in the last 45 years knows, Hashawha is home to Outdoor School, the only weeklong public school environmental immersion program in the state.

Even though Hashawha and Bear Branch are often thought of as one and the same, there is a specific distinction between the two.

“Hashawha is private and Bear Branch is public,” according to Brad Rogers, bureau chief of parks for the county’s Department of Recreation and Parks. “You have to have a reservation and rent the facility to utilize the infrastructure — the cabins, cafeteria, meeting rooms, pool — that makes up Hashawha.” He further noted that they only rent the Hashawha portion of the park to organizations that have 501(c)(3) nonprofit status, such as churches, school groups or 4-H. And of course, Outdoor School falls under that category.

On the flip side, Bear Branch Nature Center, which was completed in 1993, is open to the public. The center is open Wednesday through Sunday and can be rented out by organizations or reserved for family events. 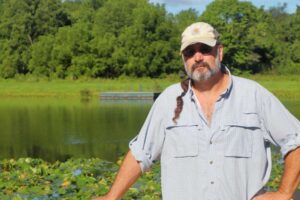 “We provide as much opportunity as possible for the many different disciplines people want to pursue.”
– Brad Rogers

Rogers, who has been involved with Hashawha since his undergrad days at Western Maryland College (now McDaniel), noted that gates and signage denote the border between Hashawha and the land and facilities that can be used by the public.

During the academic year, when Hashawha is functioning as a school and every sixth-grader in the county is rotating through, the facility has to abide by Carroll County Public Schools rules and policies. “Just like you can’t walk in the door of any public school in the county, you can’t just walk right in the door” of a Hashawha facility, Rogers said.

Although Outdoor School is by far Hashawha’s largest rental client, when school isn’t in session the facility is often booked for weeks at a time during the summer and over the weekends during the academic year. Hashawha isn’t available for rental on major holidays — New Year’s, Easter, Thanksgiving and Christmas — but any other time is fair game.

In a normal year, revenue from rentals covers about 70 to 80 percent of Hashawha’s operating costs, with the remainder coming out of the county’s general fund. The staff of both Hashawha and Bear Branch include a park operations coordinator, a naturalist at the nature center, and maintenance and kitchen staff.

According to Gina Felter, principal of Outdoor School since 2015, the staff that run Outdoor School are employees of the school system. They currently number 10 people.

Felter says Outdoor School couldn’t function without Hashawha, and adds that Hashawha might have a difficult time staying afloat without Outdoor School. There was talk some years ago about cutting Outdoor School as a cost-saving measure, but the public outcry was fierce. “It’s a win-win situation for both institutions!” Felter said. 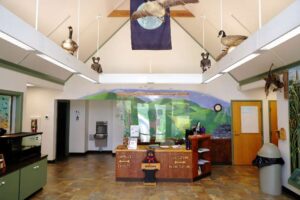 Felter, a former middle and high school science teacher and an assistant principal at North Carroll and Manchester Valley high schools, recalled that one of the reasons Hashawha Environmental Center was established was to house the Outdoor School program. When it first began, “We were using River Valley Ranch for Outdoor School and then another location,” she said. After Hashawha was developed, Outdoor School moved to its permanent home.

Outdoor School has been a rite of passage for every sixth-grader in the county. Even those students who were reluctant participants end the week having learned valuable lessons inside and outside the classroom, both about the environment and about themselves. And they have fun while they’re doing it, so it’s no surprise that some are sad to see it end and cry as they hug their counselors goodbye and board the buses for their home schools.

“We teach kids a lot about the environment,” said Felter, “but we teach them a lot about life as well, and so part of the real strength of the Outdoor School curriculum is the residential program. We embedded this into the sixth-grade curriculum because it’s the beginning of middle school and a time when students begin learning how to become responsible for themselves. We try to give them the tools so that they can be successful not only when it comes to learning about their environment but also being successful in school and in life.”

Of course, the best testament to how valuable Hashawha is to the public is in the words of those who use it.

Former Carroll County resident Mick Ferraro recounted more than 30 years of riding mountain bikes on the trails of Hashawha with his brother.

“My parents live about a mile from there,” Ferraro explained. And even though he and his family live in Connecticut now, “We ride and hike there every time we are back. My kids have ridden there now.”

A graduate of Westminster High School, Ferraro rode and raced bikes all over Carroll County in his youth. “Hashawha is the best, I love that place,” he proclaimed.

“Our family visits Hashawha at least two to three times a month. In the first few months of the pandemic, we went at least once a week,” Hogue recalled. “We use it as our escape to nature for what I call our ‘tree bath.’ We go during all types of weather and we mostly hike but sometimes we take our bikes or fish too.”

So, whether you come on your own, with your family or a group, chances are those “old fields” will keep you coming back.

Felter said that in the 1970s, research was conducted on environmental education, with the assumption that if you just took kids outside — with their parents on a walk through the woods or with Scouting activities, for example — they would gain an awareness, and that would blossom into good environmental stewardship. The research concluded that those efforts weren’t quite enough.

“What we’ve learned,” Felter said, “is that if you use the process called environmental issue investigation, where everything is hands-on and data-driven, you develop better, more engaged environmental stewards.”

“Students ask the question about an environmental topic, they collect the data on that question, find the answer to that question and then we focus on how we take what we just learned and transform that into taking action to positively change our environment,” said Felter. “And that is the ultimate goal of Outdoor School. Not just to give kids content, because we can do that in the classroom. The goal is to empower them to become positive environmental stewards, and so immersing them here for the week allows them to really develop those skills of science on their own.”

But it’s not only the sixth-graders who can have a transformative experience at Outdoor School. The high school juniors and seniors who serve as counselors throughout the year sometimes discover an interest they didn’t know they had, like a passion for education. These counselors are doing more than padding their college applications. The majority of them return as counselors because they had such a positive experience at Outdoor School and they are eager to share it with the next generation of future counselors.

Hashawha Environmental Nature Center, Bear Branch Nature Center and Outdoor School are fundamentally intertwined. “We strive to provide a place that is safe and enjoyable to recreate in the outdoors,” said Rogers. “We provide as much opportunity as possible for the many different disciplines people want to pursue,” whether it is fishing, canoeing, mountain biking, hiking, learning about nature at Bear Branch or history at the Martin Cabin Homestead or hosting camps, meetings or family events.

Rogers noted that the only thing the facility doesn’t allow is motorized vehicles, such as dirt bikes, ATVs, etc. or horseback riding. (Riding is permitted on the property adjacent to Hashawha). Other than that, if you are interested in an outdoor experience, Hashawha has old fields and many other natural features to spare.

For more information about Hashawha and the Bear Branch Nature Center, visit www.carrollcountymd.gov/government/directory/recreation-parks/places-to-go/hashawha-environmental-center-bear-branch-nature-center/ 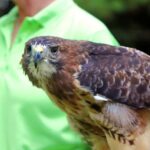 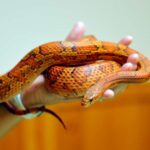 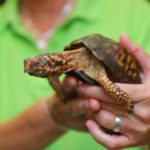 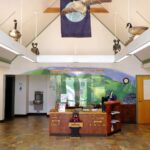 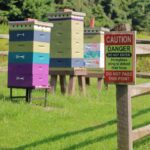 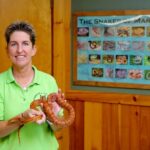